This website requires certain cookies to work and uses other cookies to help you have the best experience. By visiting this website, certain cookies have already been set, which you may delete and block. By closing this message or continuing to use our site, you agree to the use of cookies. Visit our updated privacy and cookie policy to learn more.
Home » Gruss Center for Art and Design at The Lawrenceville School by Sasaki
ProjectsBuildings by TypeK-12 School Design

When the Lawrenceville School was founded in 1810 as an academy to prepare young men for nearby Princeton University, in New Jersey, its first built facility was a Federal-style stone schoolhouse where all activity took place. The property has since grown beyond the 200-year-old building (a National Historic Landmark and still in use) into a 700-acre coeducational campus for 800-plus high school students that attracts as much attention for its traditional English-style grounds, from a scheme devised by Frederick Law Olmsted in the 1880s, as for its celebrated Socratic approach to learning, its sports facilities, and 30-acre solar field. 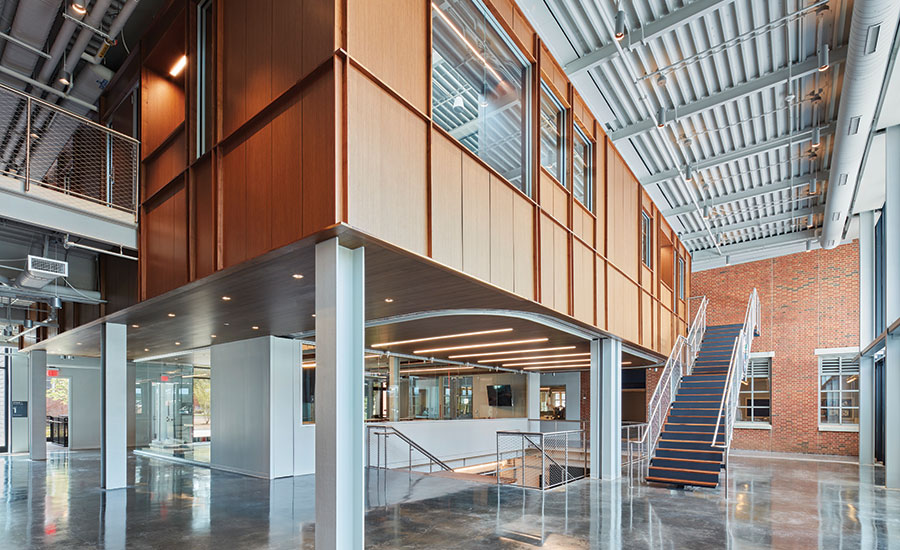 Fritted film on the glass mitigates sunlight inside where new and existing surfaces and structures are exposed. Photo © Jane Messinger, click to enlarge.

Aware of this legacy, Head of School Stephen Murray hired the Boston-area firm Sasaki to create a master plan that would revitalize the campus. His goal: to improve Lawrenceville’s pedestrian circulation and natural environments and to create new and renovated facilities for advanced pedagogies, building upon the strengths of the existing architectural identity without imitating it. The original 18 acres Olmsted developed (PDF), also landmarked, comprise a green commons ringed by a dozen Neo-Romanesque buildings by Peabody & Stearns. But, while a thoughtful expansion in the 1920s introduced stately brick Georgian-style structures by Delano & Aldrich, subsequent post–World War II additions, notes Murray, merely mimicked the earlier collegiate aesthetic. He chose to work with the multidisciplinary office, founded by landscape designer Hideo Sasaki in the 1950s, because, he says, the architects “quickly understood what we were trying to achieve.”

Sasaki’s first completed project for Lawrenceville, the new Gruss Center for Art and Design (GCAD), sits squarely in the 21st century—a forward-looking makerspace housed in a crystalline intervention that deftly links to the past. Named for donors Martin and Audrey Gruss, the flexible 17,000-square-foot steel-and-concrete structure replaces a narrow brick 1960s wing and bridges two existing arts facilities: a domed brick William Adams Delano–designed library-turned-gallery from the 1920s on its south side and a corresponding 1990s barrel-vaulted studio-art wing by Graham Gund on the north. Discreet smoky-gray glazing on the east and west facades knits old and new structures together, reflecting the landscape during daylight hours and transforming the two-story central volume into a lantern at night. Indeed, during a visit on a sunny autumn Saturday, the effect was shadowlike and evocative—a scrim that mediates the surrounding scenery. 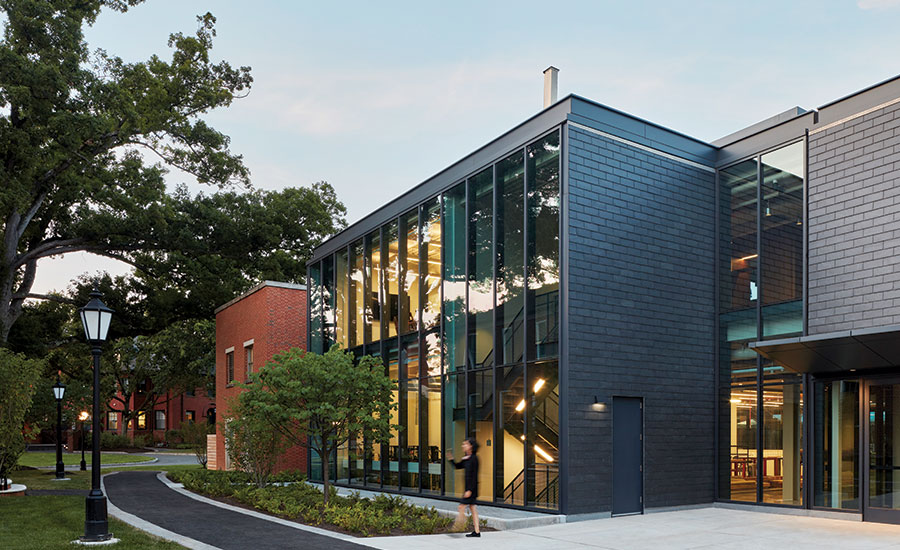 Slate cladding on the west nods to the past. Photo © Jane Messinger

“Decisions about the transparency, scale, and use of a gunmetal color for the steel structure all had to do with creating a complementary and contemplative addition to a well-established conversation,” says Sasaki principal Vinicius Gorgati. For these reasons, too, the architects clad the building’s west side with a charcoal-hued slate, similar to that of Delano’s dome, and added a pop-up transom roof for internal light and a loft, setting it back to remain unobtrusive between the dominant rooftops on either side. 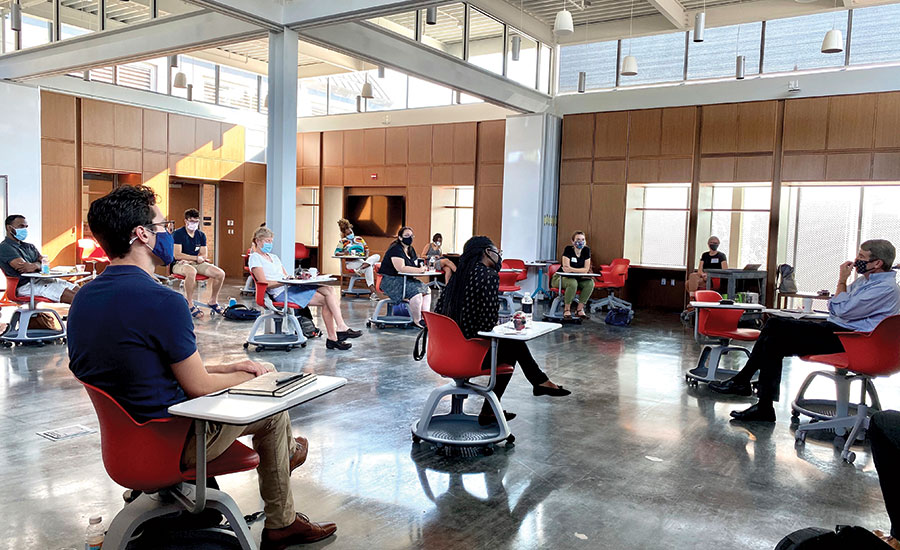 A recent socially distanced gathering in the flex room demonstrates its adaptability. 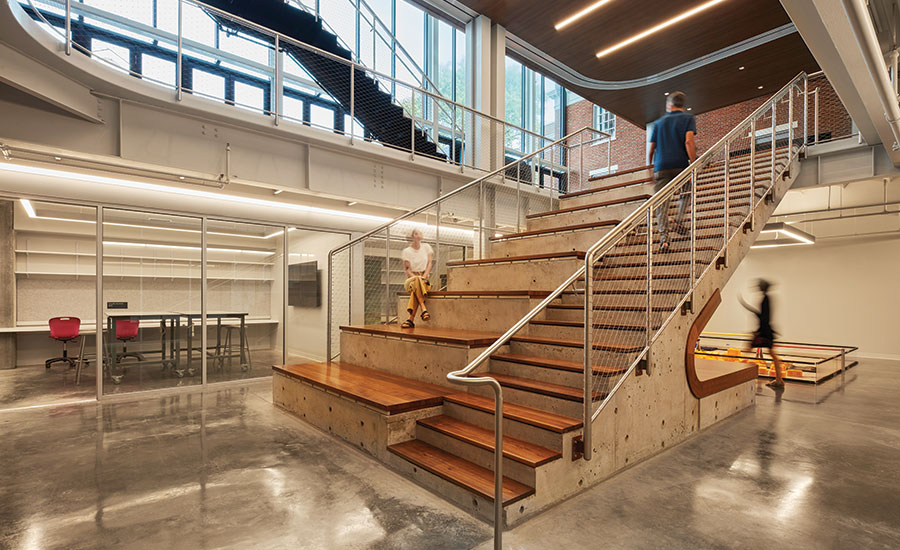 Maintaining the heritage of the older structures was critical, so Gorgati and his team left the extant brick elevations exposed within the new GCAD, touching them lightly only where necessary for passageways and to rationalize the floor levels and flow throughout the three buildings, which they integrated as a creative hub. To accommodate an ambitious program that includes state-of-the-art production, printing, and multidisciplinary facilities, the architects did reach into the adjacent studio-art center to build contiguous metal and wood shops. Then they created an open tri-level volume with a glazed assembly room and concrete forum stair at its core. The walnut-topped bleacher-like treads—also used as benches for informal classes and meetings—lead to a basement with a virtual-reality space and transparent computer and clean rooms. On the upper level, a 2,000-square-foot flex room, also wrapped in walnut, overlooks the double-height lobby, getting plenty of sunlight through interior windows and the transom roof above. This modifiable space divides into four acoustically controlled areas with operable whiteboard and pinup walls.

The building is ideal for teenagers, says Murray, with its array of gathering and private places where they can choose to be seen—or not. Lined with glass doors along its east elevation, the GCAD opens onto the lawn for events and team projects during warm months. But even on cold days, all students are welcome to stop by or use the building as a shortcut when navigating the campus. And why not? Notes the Head of School, “Kids just walking through might see something interesting that will encourage them to take a course here before they graduate.” 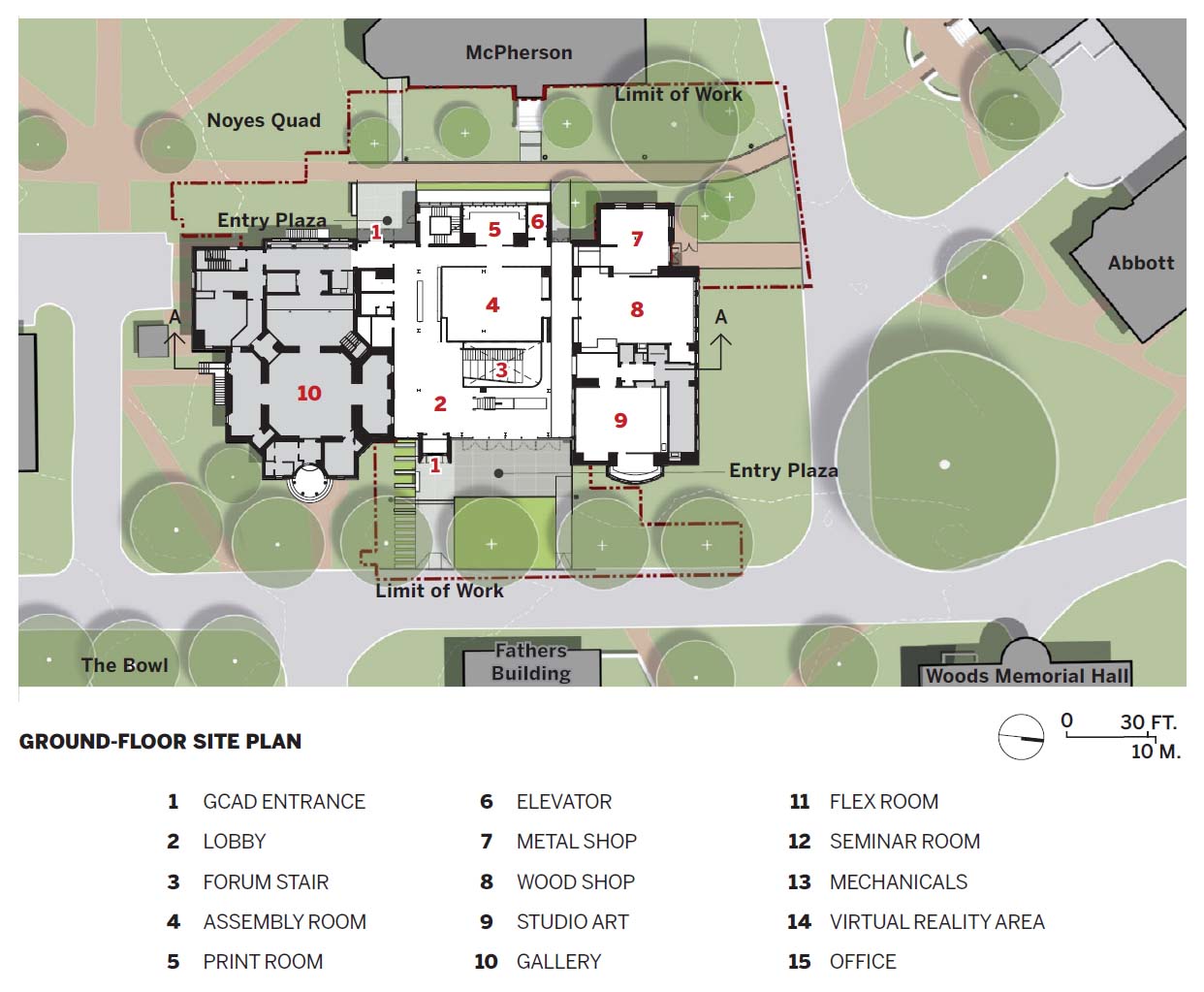 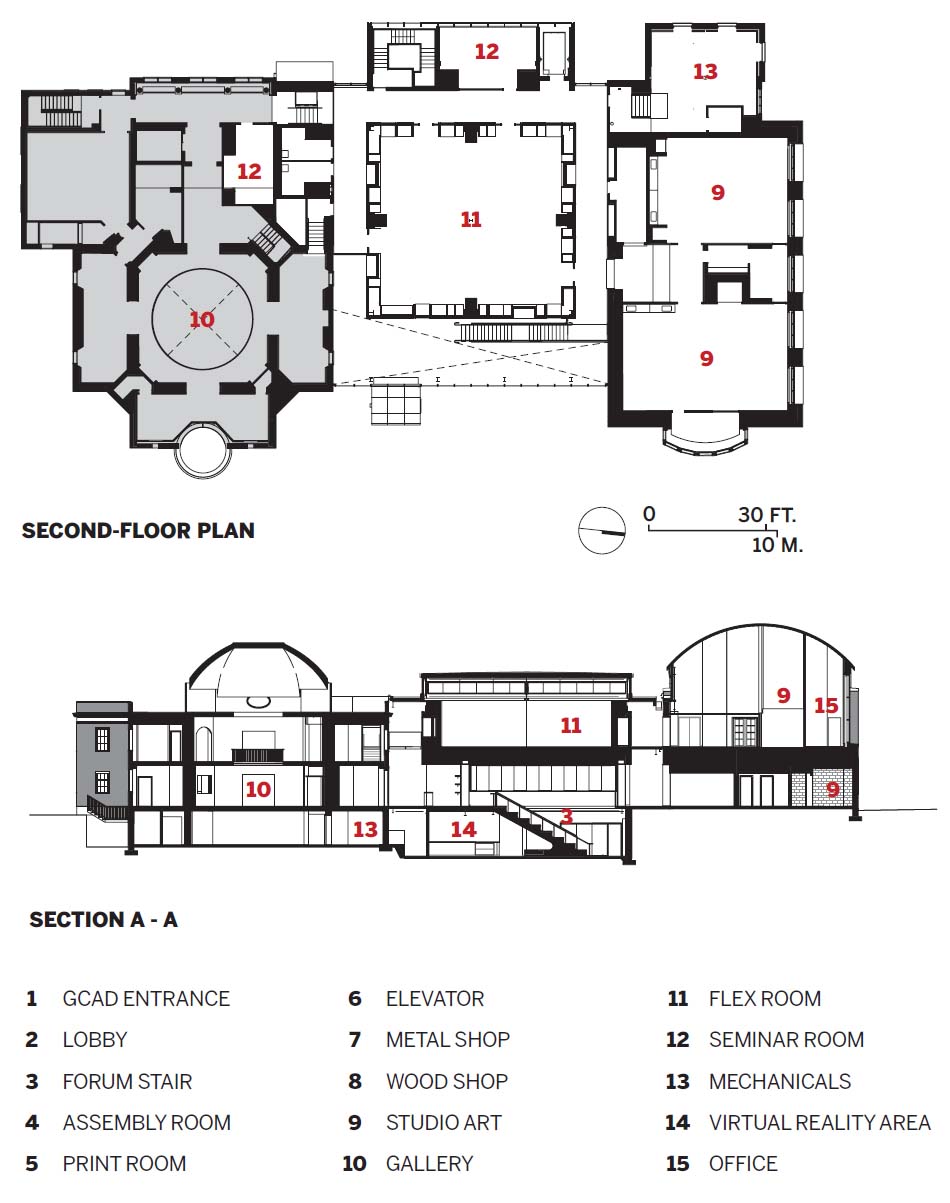 Avenues: The World School by Perkins Eastman and Bonetti/Kozerski Studio