For the past eight years, Johannesburg-based Local Studio has been actively engaged in what founding principal Thomas Chapman calls “social-impact projects.” The 15-person office—a RECORD Design Vanguard firm in 2018—is known for hyper-local initiatives, including community centers and affordable housing. Like many of its projects, the studio’s most recent, a four-classroom primary school in the suburb of Mayfair West, was made possible by a private donor—something Chapman attributes to a general lack of interest in the public sector for such work. Funded by the Italtile and Ceramic Foundation, whose parent company manufactures building products, the new Salvazione Christian School building—located within walking distance of the studio’s office—serves students from a nearby informal settlement called Slovo Park. 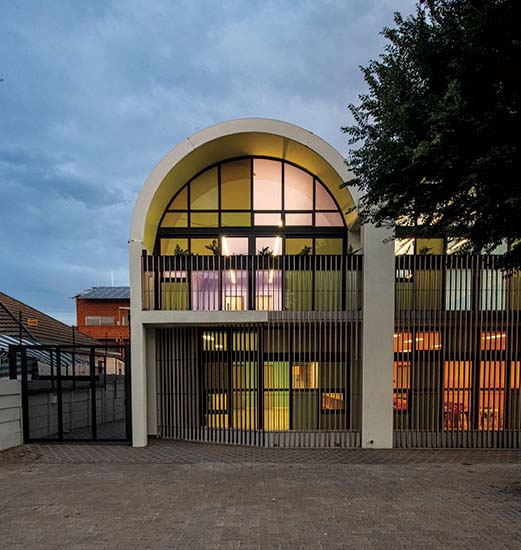 An exterior screen of pine slats serves as a subtle security barrier on the street-facing side of the two-story brick building. Photo © Warwick Preddy, click to enlarge.

The 4,800-square-foot structure sits down the street from Salvazione’s main school, a modest church building that had housed pre-kindergarten through grade seven. The new construction accommodates the younger grades, creating more space for the upper grades, which remain in the original building. One of the goals of the design is to create a welcoming presence among the surrounding walled-in houses—a response to the neighborhood’s high crime rate. To get to the school, children traverse as much as a half mile on foot through “very dodgy” areas, says Chapman, so it was important that they “be able to walk up and see this recognizable form that’s different from anything else on the street—something playful and motivational.” 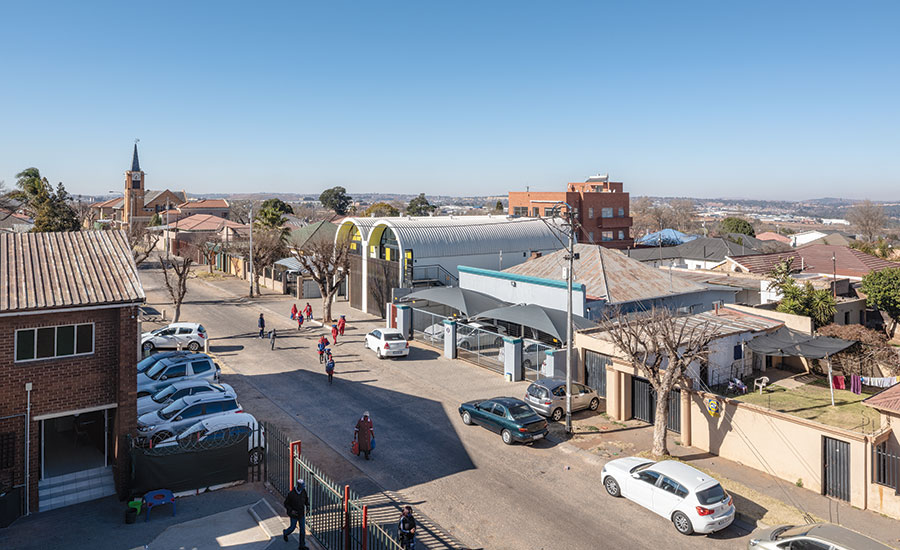 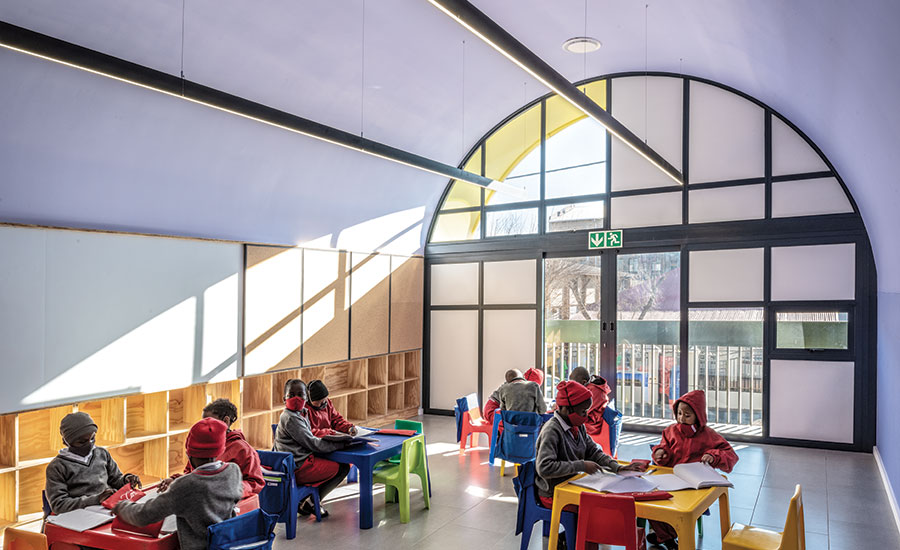 The barrel-vaulted structure is a welcoming presence in the neighborhood (1) and offers spacious classrooms (2). Photos © Dave Southwood

The new two-story school gently pierces the grid of low-slung single-family dwellings. Its facade—a lattice of clear, glazed, and insulated solid-yellow panels that tempers transparency with privacy—and its double-vaulted rolled-zinc roof lend the building a soft, friendly appearance. An exterior screen of wax-impregnated pine functions as a subtle security barrier that allows ample natural light to enter the classrooms, all of which face the street. At the building’s rear, a slide—also yellow—snakes down from the second level like the trunk of some abstract mammal; upon landing, children can scale up the facade via a slender climbing wall. 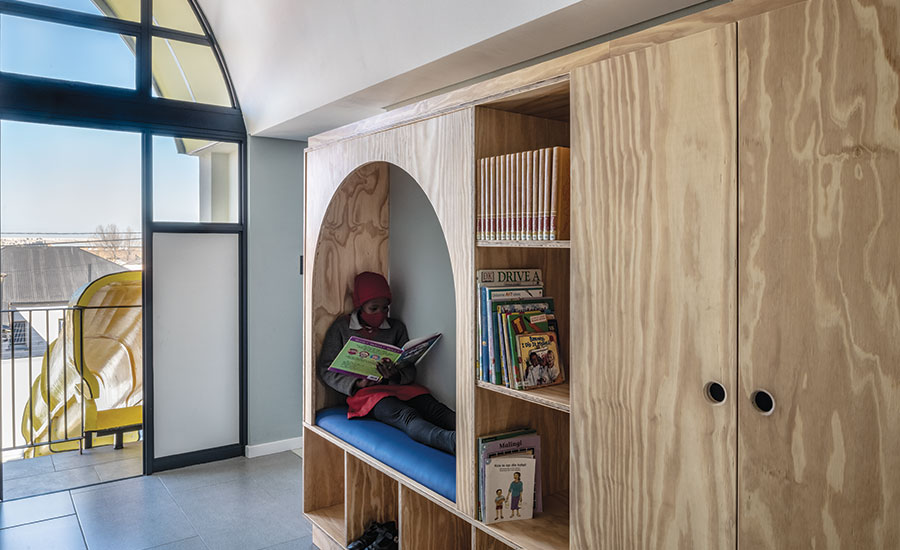 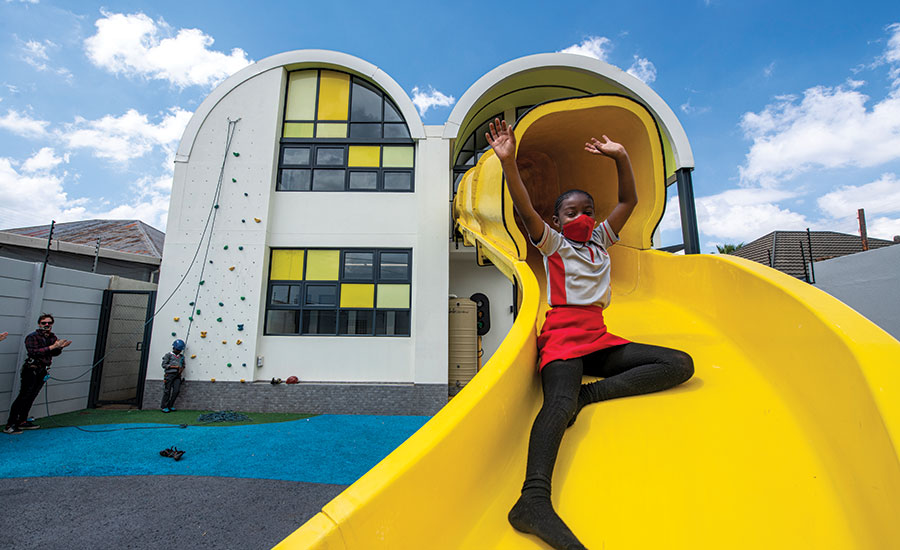 From the second level (3), students can slide down to the backyard playground (4). Photo © Dave Southwood (3), Warwick Preddy (4)

In lieu of steel and corrugated polycarbonate—which have become hallmark material solutions for the firm’s very low-budget projects—the clients asked for a traditional brick structure, since it proved to be the most economical way to support the vaulted roof. The two classrooms on the top floor benefit from the spaciousness provided by the arched ceiling, making the most out of the school’s small footprint.

According to Chapman, the project serves as an urban design prototype for “how to reimagine the standard post-residential site.” The architects subverted the traditional suburban lot arrangement, where the main structure sits in the middle, by pushing the volume to interface with the street and announce a different use. Chapman acknowledges that this cannot be achieved without zoning negotiations, as were done in this instance, but, when the circumstances allow it, architecture could play a key role in transforming crime-ridden areas into safer, mixed-use neighborhoods.