Since it was established in 2012, South African firm Local Studio—a 2018 RECORD Vanguard—has built a reputation around resourceful, low-cost design solutions for social infrastructure projects in Johannesburg, where it is based. Until recently, the majority of the studio’s work—which includes projects such as a refugee-support center, a community-outreach facility, and multiple schools—has been in disadvantaged neighborhoods with little access to basic civic spaces. But over the past couple of years, the firm has expanded its reach to rural areas; among its latest projects are two modest, timber-clad dormitories for the nonprofit organization Pan Africa Today, located in Bela Bela, about 250 miles north of Johannesburg in the shrublands of Limpopo Province. 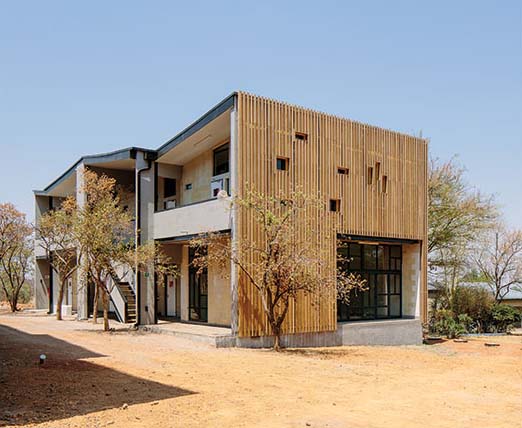 The new two-story buildings, each 7,250 square feet, with identical layouts, are part of a 12-acre campus purchased in 2015 by Pan Africa Today, which is focused on educating young people about socialist principles. Originally built in the early 2000s as a wedding venue, the complex included several Cape Dutch–style structures: guest bungalows, a dining hall, and other ancillary spaces. Now the site supports weeklong training camps, workshops, and conferences that bring together activists from across the globe in order to “build solidarity among trade unions, civil society, and youth and women’s movements,” according to the organization’s website. As Thomas Chapman, founder of Local Studio, explains it, the collective’s intent is to better prepare citizens for active political involvement. “Protesting capitalism is massive in this country—socialism isn’t as much of a dirty word here,” he says. Despite significant strides toward poverty reduction since its transition to democracy in 1994—when the African National Congress, which has long had ties to the South African Communist Party and the Congress of South African Trade Unions, became the country’s ruling party—South Africa still has one of the highest inequality rates in the world, according to the World Bank.

The majority of the buildings were in good shape and didn’t need to be altered; some were converted into classrooms and meeting spaces, and the bungalows still serve as overnight accommodations. The chapel, according to Chapman, was converted into the Karl Marx Library. But the organization required more lodging units. The brief called for two straightforward, easy-to-maintain, and sustainable blocks with a total of 112 beds that could be built with little money. Initially, the budget only allowed for a concrete-block structure and plaster and paint for the shell, but the architects negotiated a bit more funding so they could have some room to innovate. 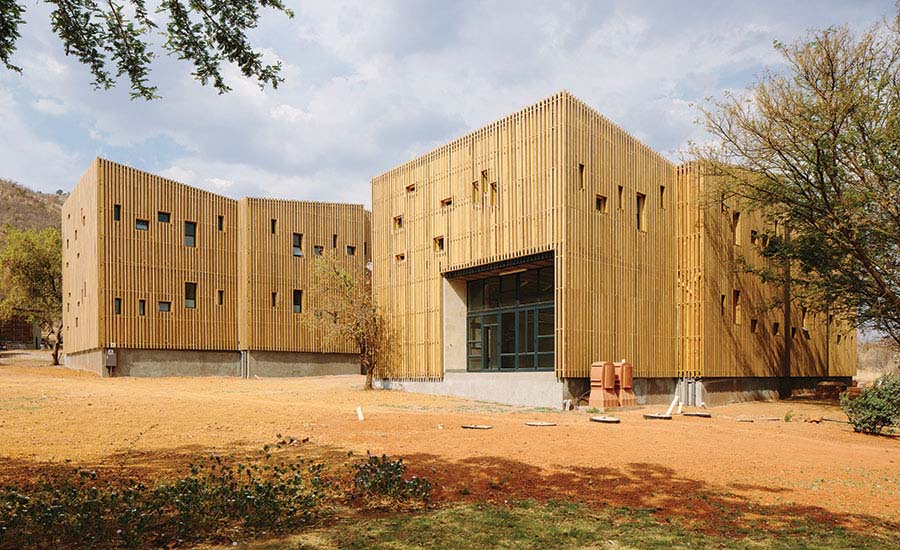 Slats of wax-impregnated local pine—which float from the exterior surfaces, creating subtle effects with natural light—clad the structures (1). Given the lack of air-conditioning, the stairwells are located within partially enclosed outdoor areas to provide shade (2). Photos © Tristan McLaren 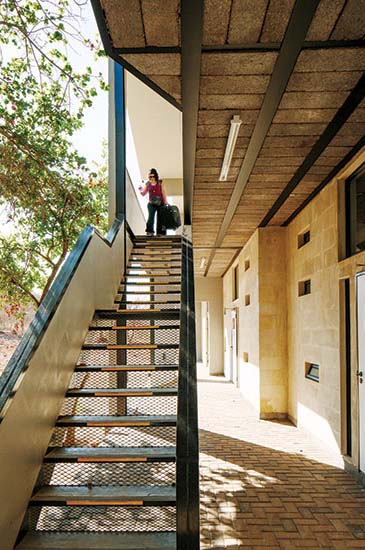 The design team opted for wax-impregnated South African pine for the cladding. Given the monetary constraints, it was not possible to wrap the buildings entirely in timber, so the architects took thin slats and floated them off the structure, leaving spaces in between. “With a little experimentation, we created an architectural effect that catches light in interesting ways,” Chapman says. They also played around with the fenestration, which appears as a random assortment of differently sized apertures but is the result of a simple logistical exercise: with each room containing four tightly fit double-deck bunks, the architects gave each individual bed its own operable window. “We wanted to ensure that each person had some control, which is limited when you have to share a small space with seven others,” he says.

Local Studio also convinced the organization to include social space within the buildings. On the ground level of each structure, the architects transformed one of the eight equal-sized units into a multipurpose educational room, with glazed doors that open to the landscape. Partially enclosed balconies also serve as popular gathering spots; since the dormitories have no air-conditioning, these alcoves provide much-needed shade. The buildings are powered by a local solar farm, and blackwater is recycled for the irrigation of a nearby vegetable garden. 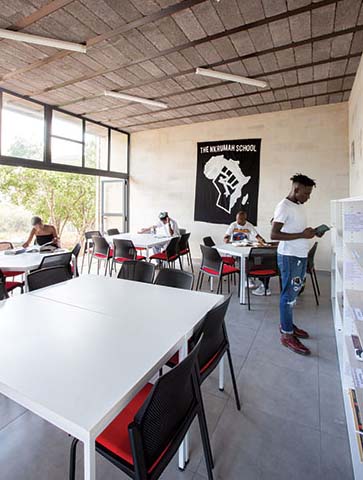 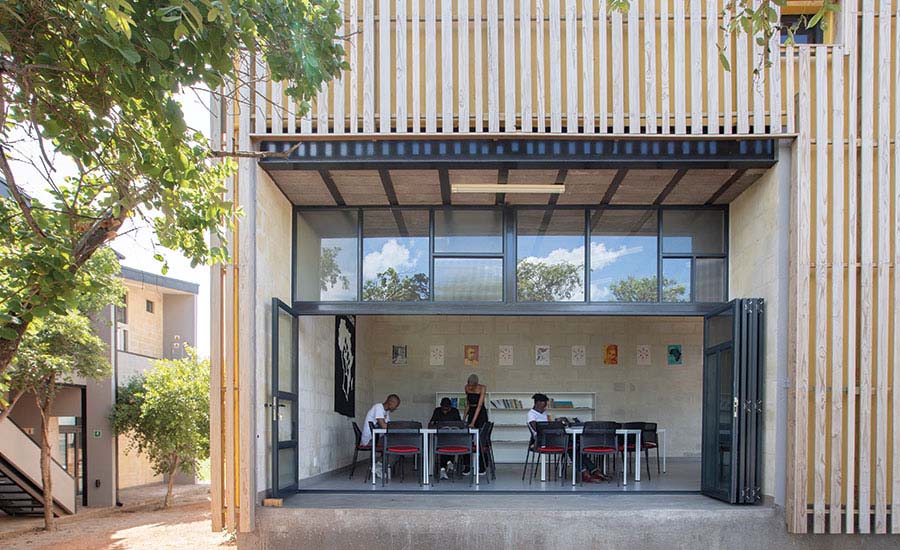 Each building, constructed with lightweight concrete blocks, comprises seven lodging units and a multipurpose educational space that opens to the outdoors, activating the surrounding landscape (3 and 4). Photos © Natasha Laurent

Despite its rural location, Chapman says he doesn’t see much difference between this project and the studio’s work on small urban sites. “You don’t have the surrounding city to respond to, but you are still building a community. All of our work considers public space and ways to bring people together.” Philanthropic projects in rural areas, such as the Lapalala Wilderness School, about 100 miles to the southwest of Limpopo, make up nearly half of the firm’s current work, a trend that Chapman embraces. “We’re enjoying the balance.” 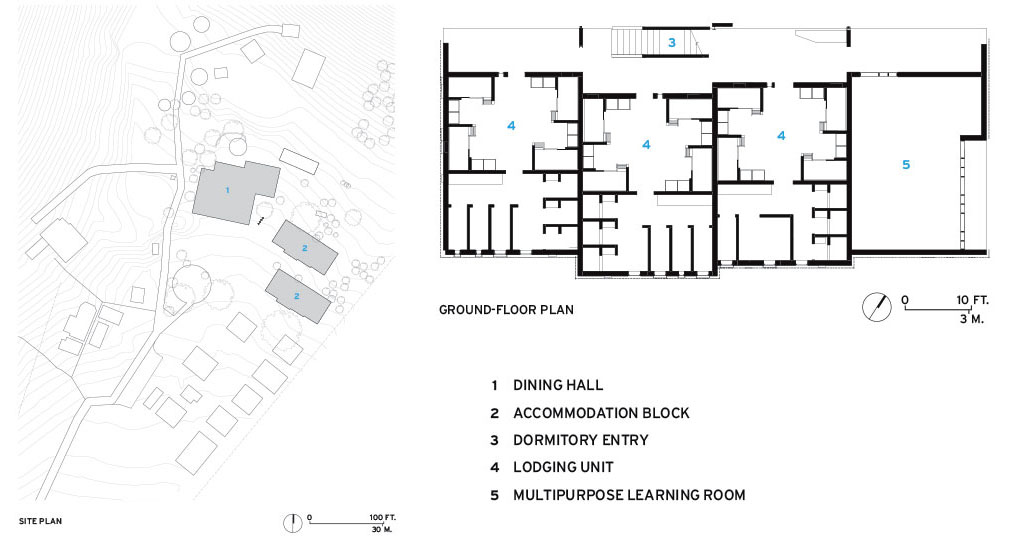