We who assemble Record Houses each year could be accused of having a penchant for the “box on the rocks”— a modernist, Miesian volume with elegant proportions and impeccable detailing, perched on a craggy cliff. The tension between a rugged landscape and the taut planarity of the flat-roofed form can be irresistible. But we know there is more.

Take the year-round house designed by Paul Masi, of Bates Masi + Architects in East Hampton, Long Island, for a family in nearby Amagansett: it stands out as a modernist residence in its open plan and glass walls, but it successfully mixes those elements with traditional or vernacular motifs such as gable roofs and spacious barnlike enclosures. 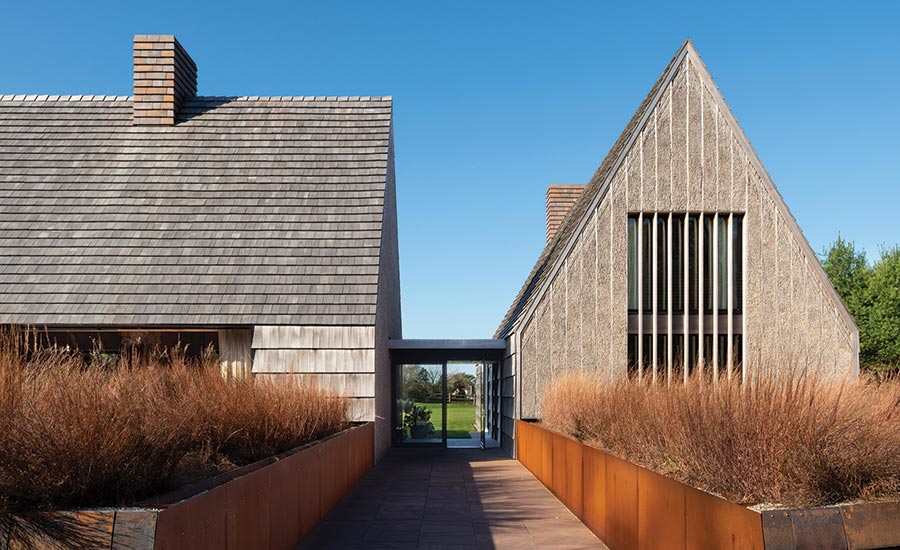 Cedar shingles, terra-cotta tiles, thatch panels, and weathering steel can be seen at the entrance to the main pavilion. Photo © Paul Masi, click to enlarge.

A cluster of three connected pavilions, 6,300 square feet in all, the design shows a clarity of expression developed with inventive flair through the use of natural materials, even unexpected ones. To be sure, the architect relies on a well-known batterie de cuisine for high-end construction: Douglas fir framing, cedar shingles for exterior walls and roofs, white oak for floors, interior walls, ceilings, and stairs. Yet the weathering-steel plate for elevated planting beds is unusual, as are the mottled copper-toned terra-cotta shingles employed not on roofs but on some exterior walls, as well as on a freestanding fireplace chimney inside. On top of that, Masi has introduced panels of thatch on wall surfaces both inside and out. 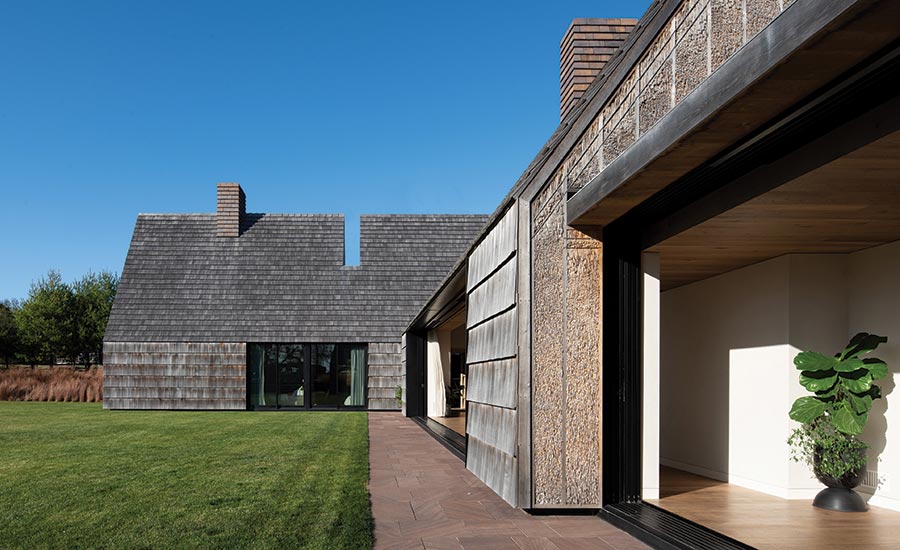 In the early 20th century, thatch, associated with old English cottages, was occasionally faked in picturesque houses in the area by the intricate layering of cedar roof shingles to create that effect. But Masi wanted real thatch for some walls because of its natural texture. “My choosing thatch actually wasn’t an architectural decision,” he says when asked if he was alluding to thatched roofs of yore. “I became interested in it because of the pastures surrounding the house and knowing that phragmites (tall reeds) are plentiful out here.” Still, he had to go as far as Ohio to find a thatcher who could produce the shaggy panels, set within steel bars. 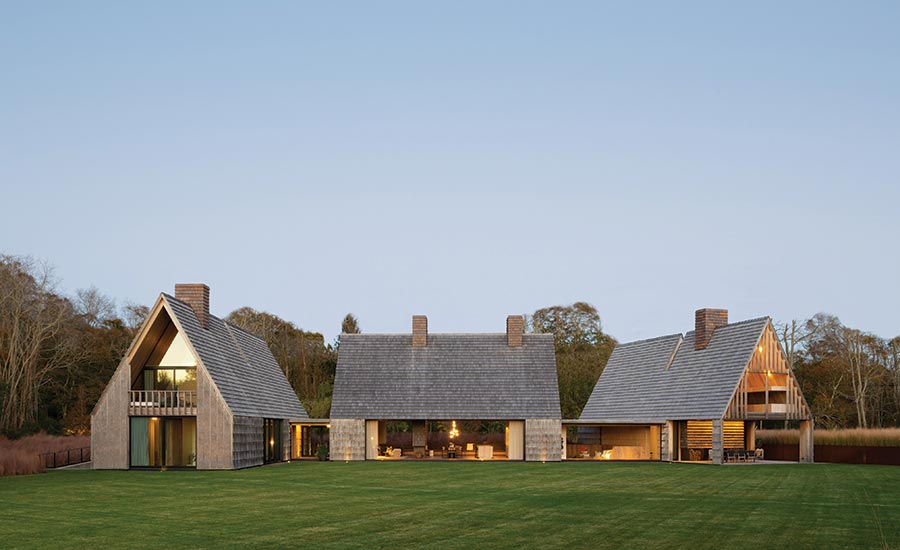 The compound is oriented to a lawn on the west. Photo © Paul Masi

The attraction of the pasture and easy access to the outdoors determined much of the design for this three-acre property. Since the clients, Jon and Janice Hummel, like to entertain, and their young daughters frequently have friends over, Masi arranged the pavilions so that the main structure, for living, dining, and the kitchen, occupies the center and is flanked by one containing the family’s bedrooms, gym, and spa, to the north, and to the south by guest quarters, where an outdoor entertaining space is tucked underneath an open-air second-story sleeping porch. The structures all look out to a swimming pool at one end of a large lawn, and beyond to pastures that are preserved in a land trust. 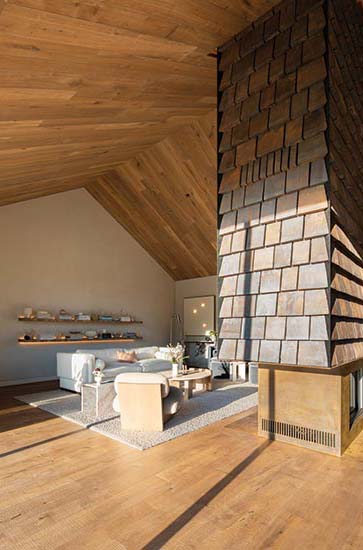 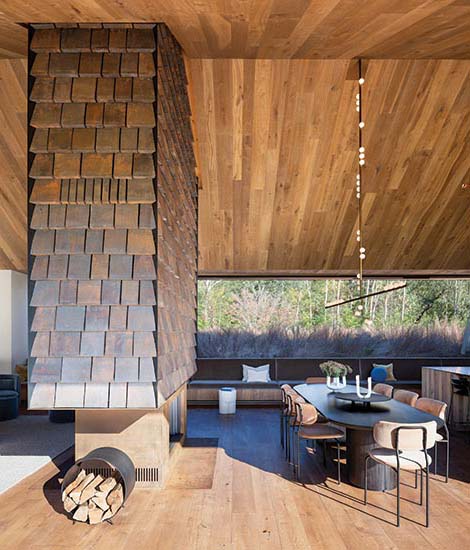 A freestanding fireplace and chimney separate the living area (3) from the dining area (4). Photos © Paul Masi

On the front side of the compound, parking is shielded from the house by the raised beds of switch grass. As you walk into the glazed entrance vestibule in the main pavilion, the living area lifts expansively upward to the pitched roof, where the 16-foot-high terra-cotta-shingled chimney separates the living and dining spaces, and a panoramic view to the lawn opens up through sliding glass walls. The main pavilion also contains the family room—a snug, a low-ceilinged alcove-like oak-paneled space defined by L-shaped built-in seating, where the Hummels like to gather. 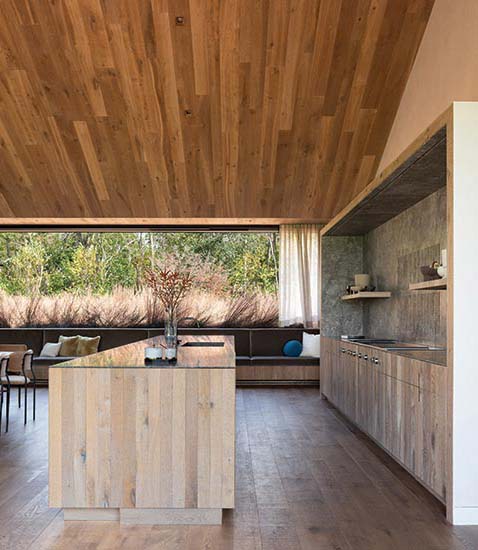 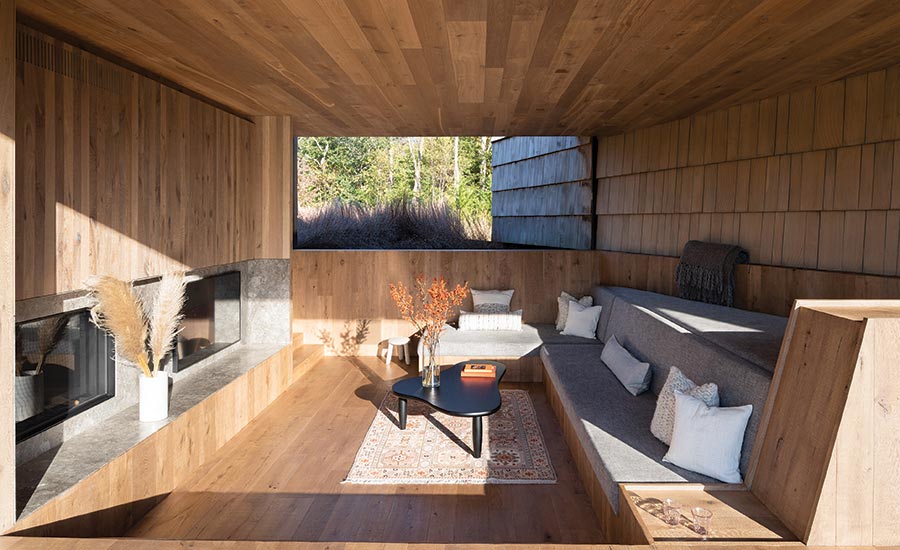 A 40-foot-long banquette extends through the living and dining areas to the kitchen (5). The cedar-paneled family room has an intimate scale (6). Photos © Paul Masi

Throughout the house, the deep pitch of the gabled ceilings—a throwback to traditional wood-framed architecture for assorted lodgings—continues to provide spatial drama. “The steep gables add height to the rooms, while the floors can act as collar ties for the structure,” says the architect. A lightwell on the north end of the bedroom pavilion reminds you that Masi’s idea of the vernacular can extend back to a feature used in ancient times: to admit daylight into the underground level of the pavilion, where a gym and other activity spaces are located, the architect carved a gap between its glazed walls and a 14-foot-high concrete retaining wall. The planted courtyard of the narrow lightwell, which is accessible from the recreation rooms and angles gradually up to the lawn, adds a surprising feature to the ensemble. 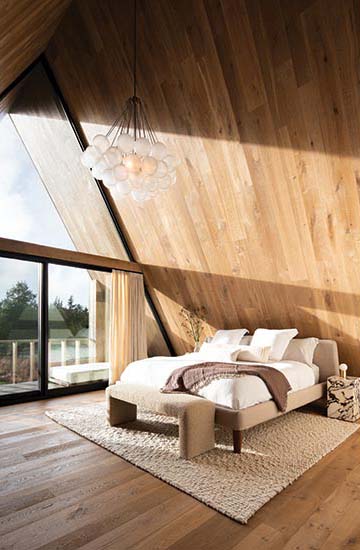 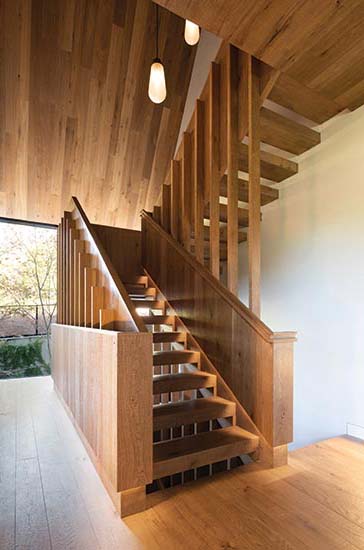 The high level of craft and detailing has been a hallmark of the architect since he became a partner of Harry Bates (now retired) in 1997 and began to earn a reputation for crisp wood-frame structures of both heft and elegance (Record Houses, April 2012, June 2017). “He knows his materials and how to use them,” says Hummel, a particularly useful skill in the often harsh, damp, cold climate on the Atlantic shore of Long Island. Equally important, Masi is savvy about the top contractors in the area—and for this house, the builder is the client: Jon Hummel is a principal in the custom-home building company that his father, John Hummel, started in 1982, in East Hampton. In selecting his frequent collaborator as the architect for his own residence, Hummel emphasizes Masi’s knowledge of building for all seasons, in a place where so much new construction is geared to summer houses. And Janice Hummel, the interior designer for her own house, found her sensibilities favoring a subtle color palette, natural textures, and simple lines were in close accord with Masi’s.

At a time when so many houses are being built on the East End of Long Island that conflict with the landscape through jarring geometric exercises or mimic the context by cloyingly replicating villas and cottages of the past, it is gratifying to see an architect mix traditional and modern vocabularies with such supple dexterity and imagination. In its “both/and” approach, this house reminds us that there are rich and variegated alternatives to the box on the rocks. 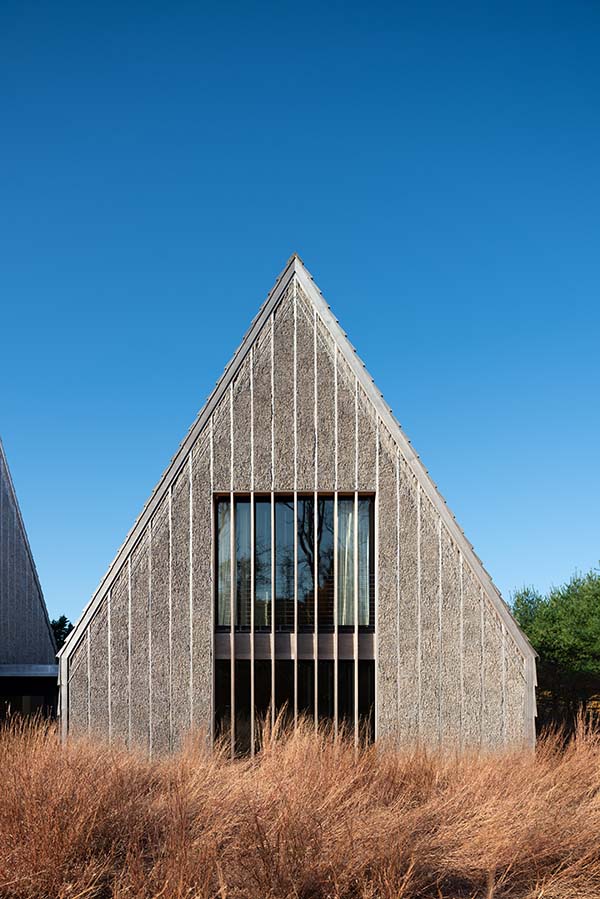 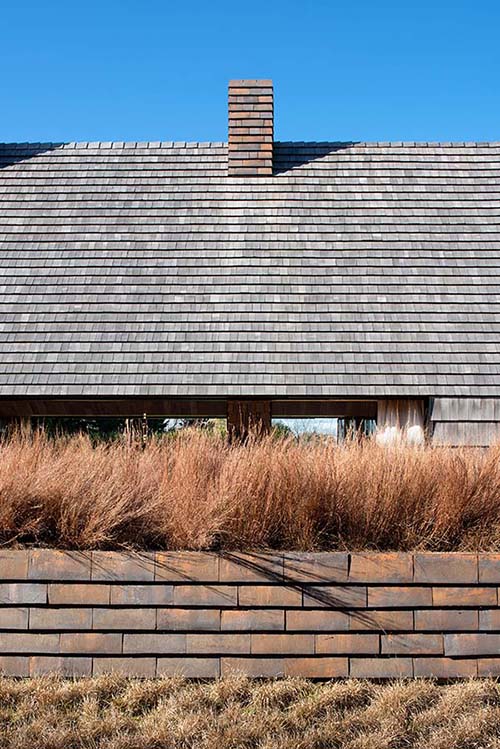 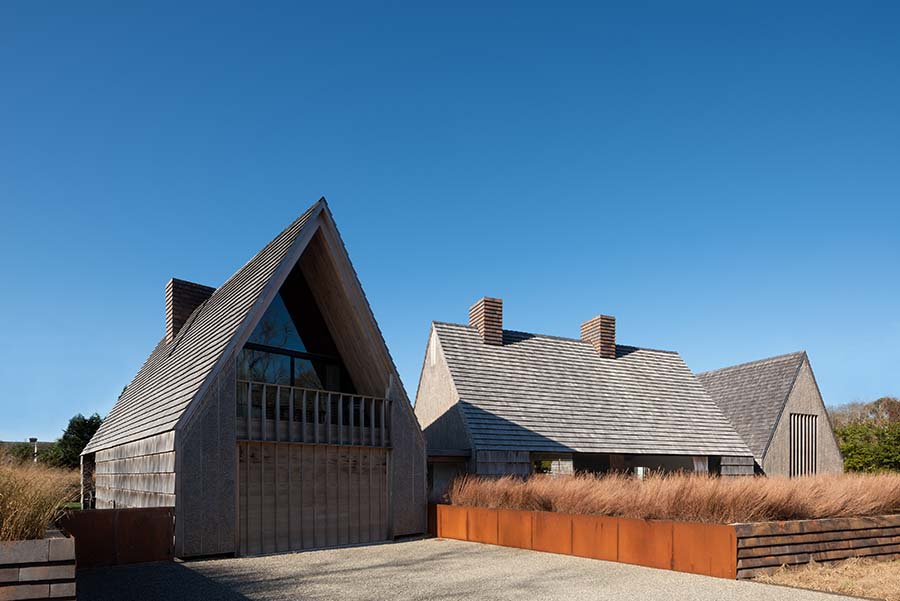 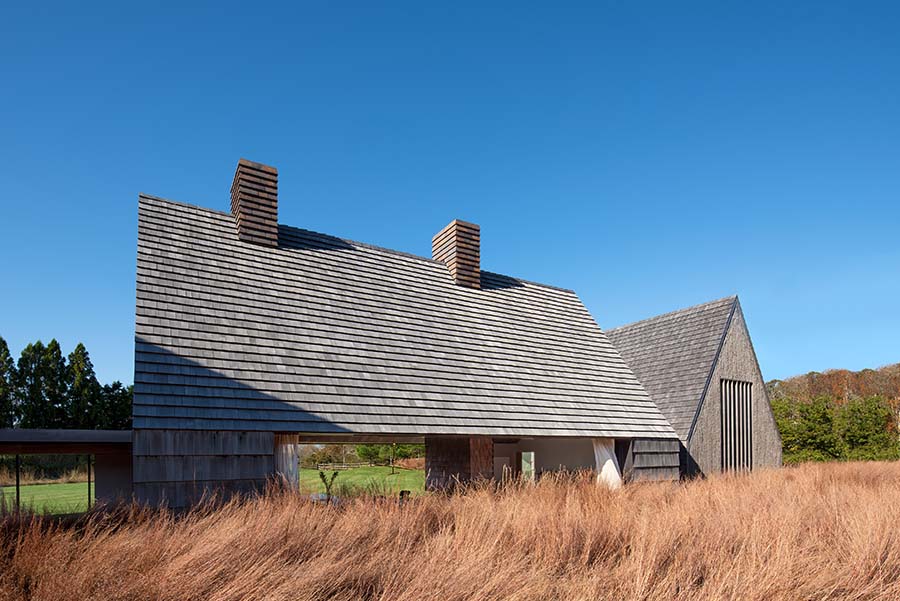 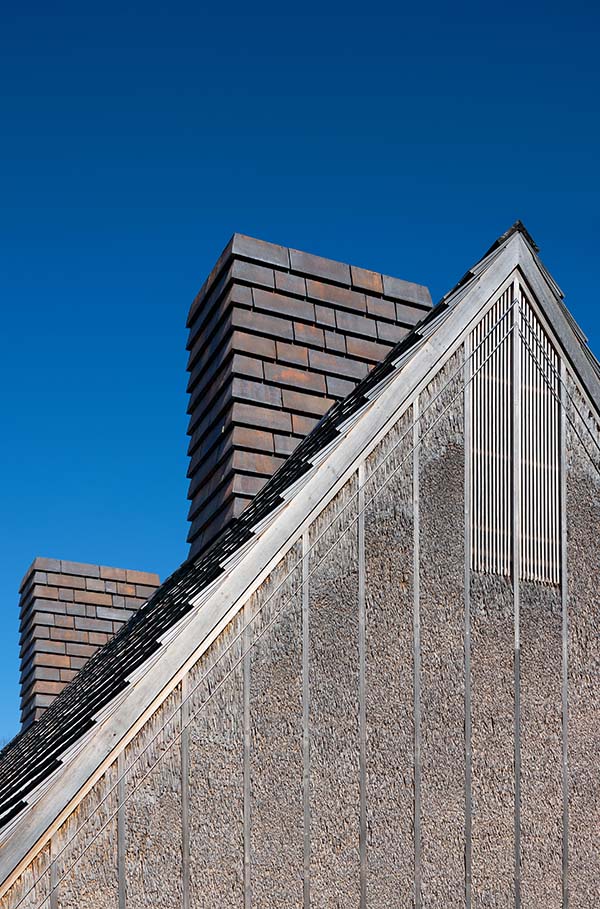 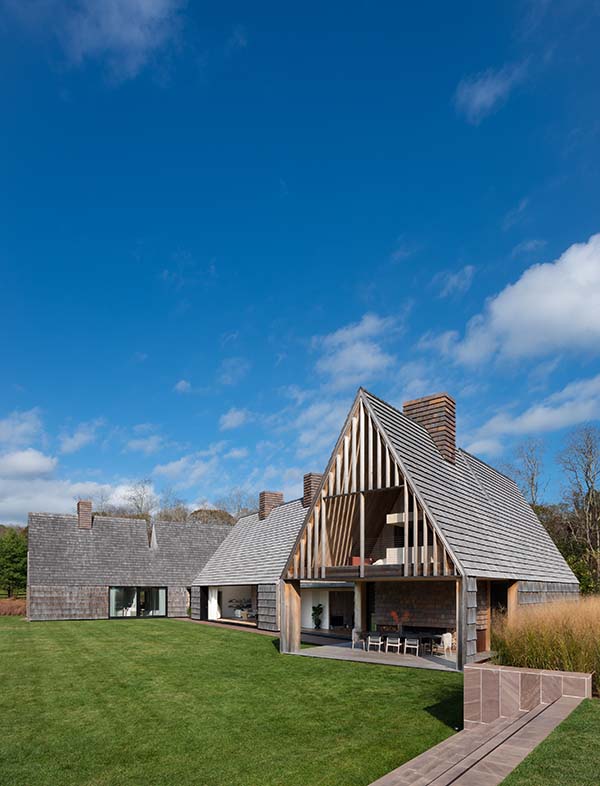 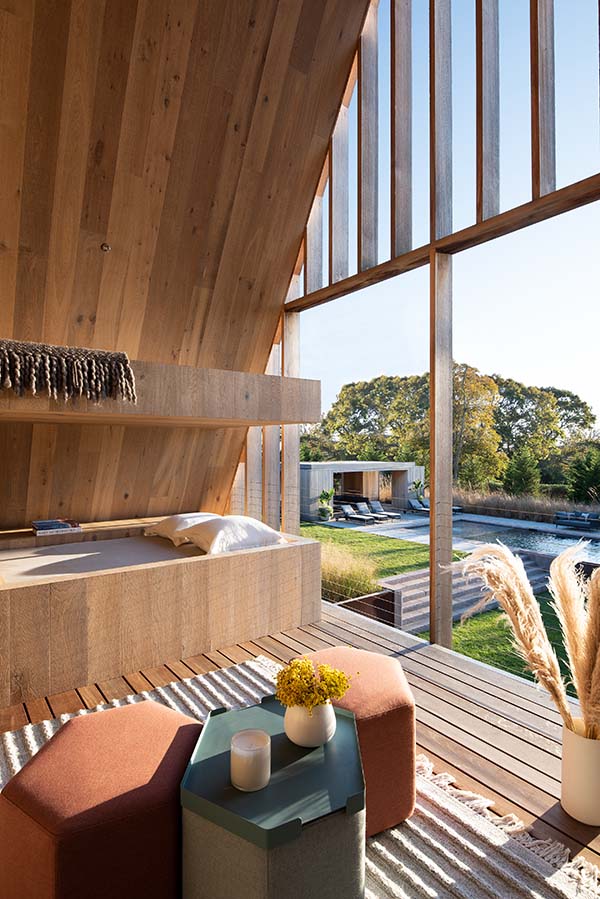 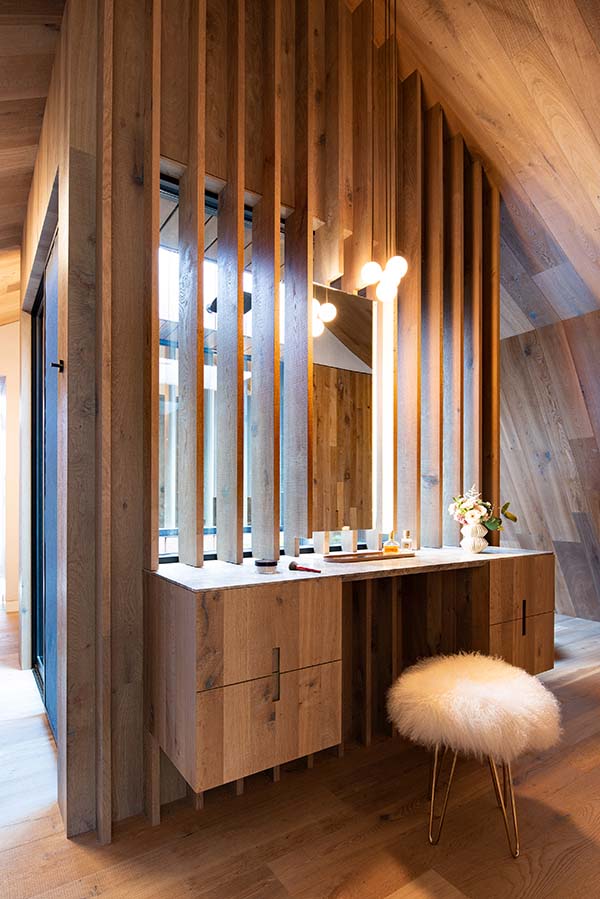 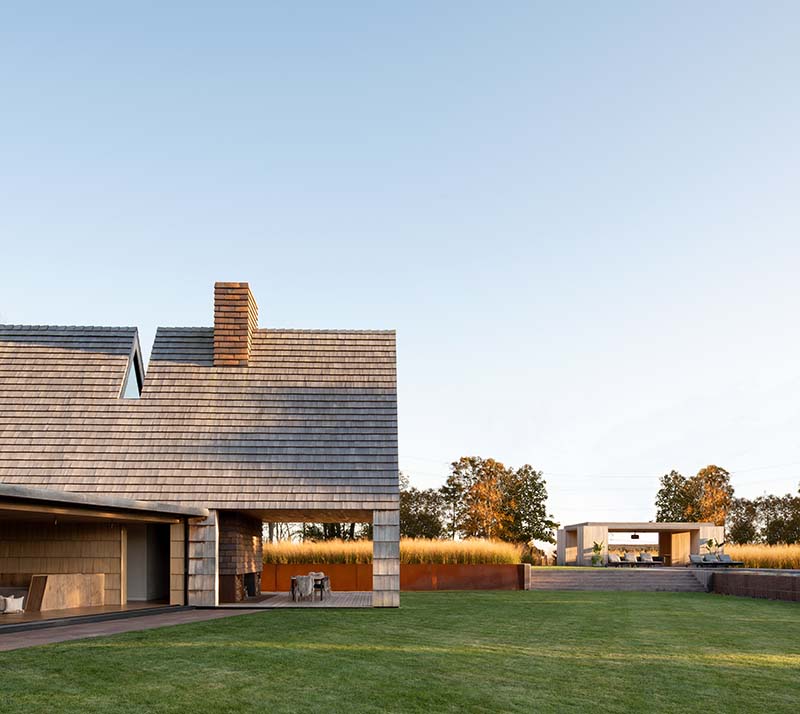 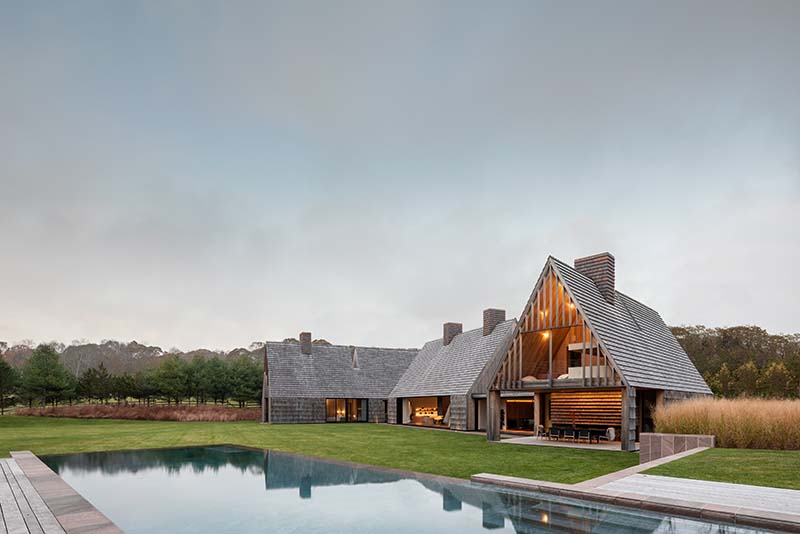 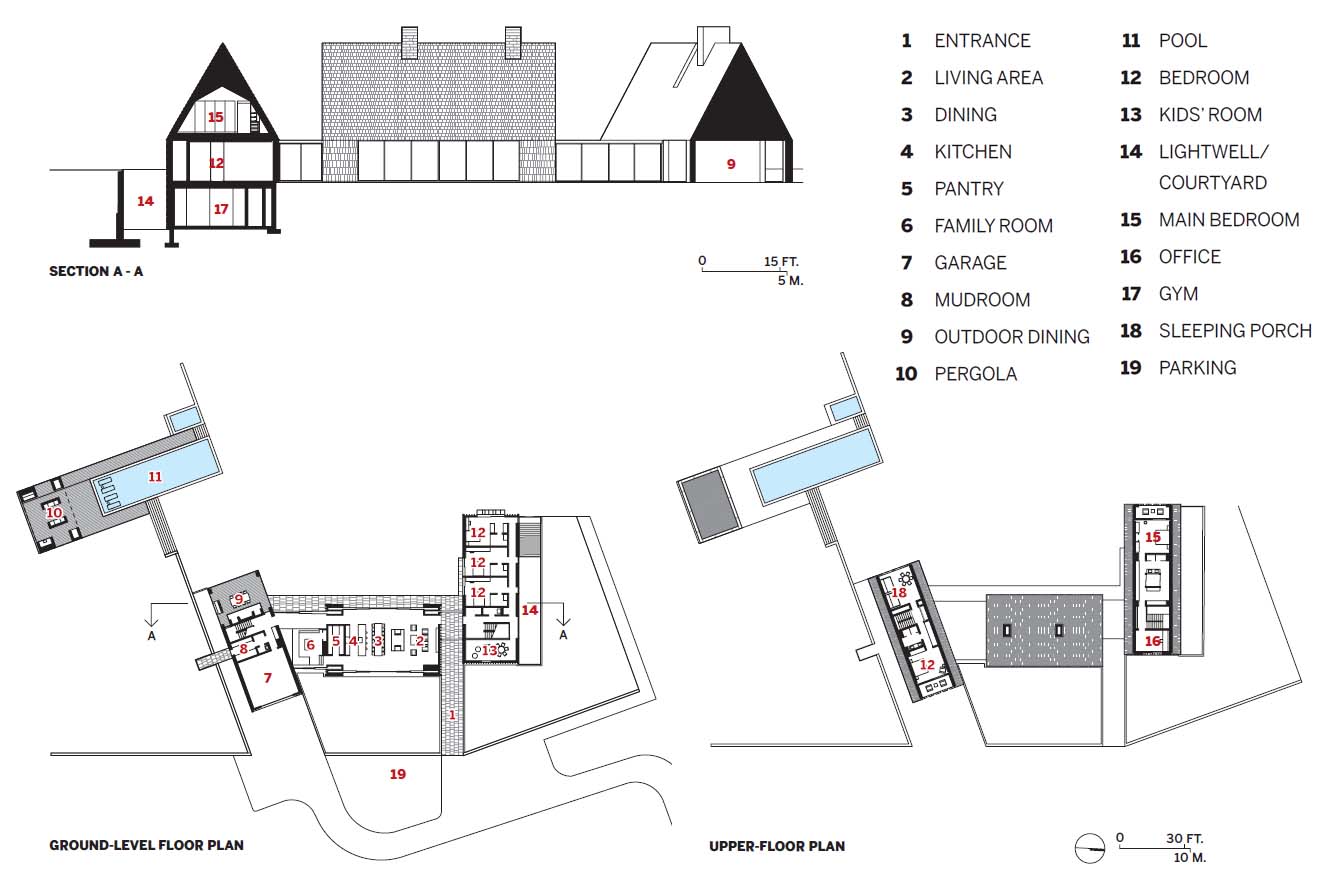