Forest Park has been the 1,300-acre centerpiece of St. Louis for nearly 150 years: it hosted the 1904 World’s Fair and is home to many of the city’s beloved museums, gardens, and historical structures. Today, a new building punctuates the northeast corner of the park. Completed last fall, Studio Gang’s One Hundred is the firm’s first project in St. Louis. The tower houses 316 residential units ranging from studios to three-bedrooms and rises 36 levels above the Central West End neighborhood. Located near mansion-lined Lindell Boulevard at an intersection of a main artery, North Kingshighway, the building takes advantage of some of St. Louis’s finest views. To the west, it overlooks the rolling green space of Forest Park, while to the east, the building sits almost directly on axis with the Gateway Arch and downtown St. Louis. 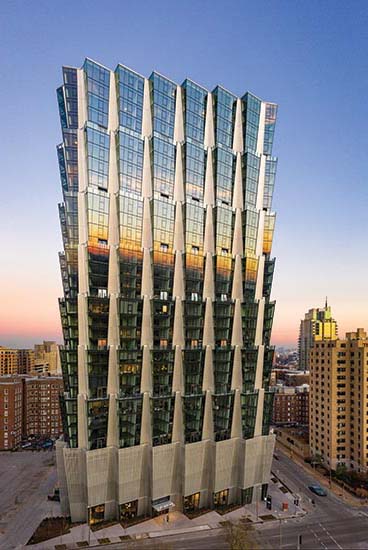 The building springs up in four- to five-floor tiers. Photo © Sam Fentress, click to enlarge.

A bustling district, with a vibrant streetscape of shops and restaurants, the Central West End was one of the neighborhoods that suffered least from the impact of urban decay that afflicted the city in the mid- to late 20th century. Vestiges of the neighborhood’s historic grandeur are speckled throughout the area, such as the Art-Deco Chase Park Plaza hotel and apartments. Until One Hundred surpassed that building by eight floors, the 28-story Park Plaza tower was the most prominent landmark in the area. For the design team, it was important for One Hundred to engage with this context. According to Studio Gang design principal and partner Juliane Wolf, “We wanted to create a massing that continues the street wall of Kingshighway and finds its place within the other tall buildings—Chase Park Plaza and Barnes Jewish Hospital—that define that edge.” The building also adds roughly 95 linear feet of retail frontage at street level, with the first tenant, a Pilates Lab, set to open in May. 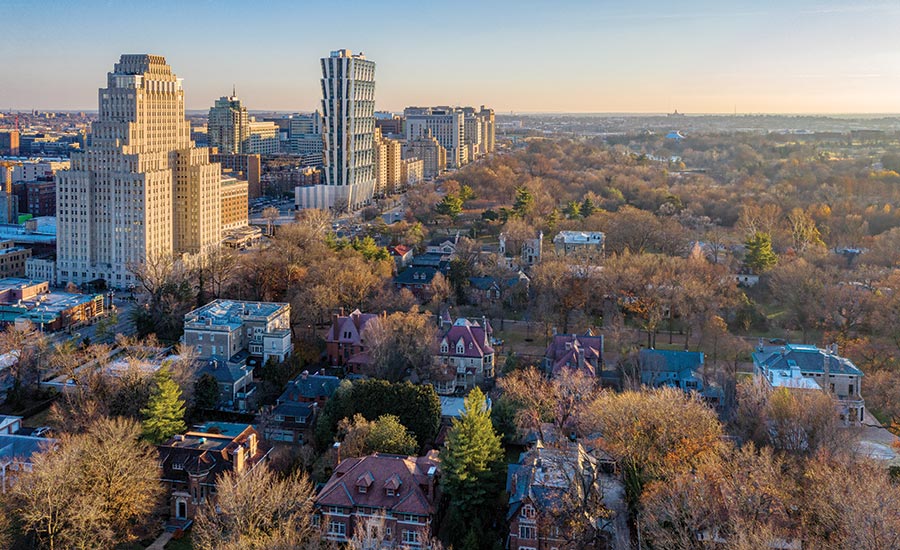 One Hundred is part of the street wall along the eastern edge of Forest Park, whose north side is lined with century-old mansions. Photo © Sam Fentress

The most striking feature of the new building is its distinctive shape. Above a horizontal podium consisting of the ground floor, parking levels, and an amenities level, the tower rises in a series of four- or five-floor tiers, each splaying upward in a pattern of oblique angles. One Hundred is the latest in a trio of ground-up projects that Studio Gang has completed with Chicago developer Mac Properties, each with successively more complex exterior skins that address conditions of natural light and solar heat gain. Studio Gang’s earlier projects with Mac Properties, City Hyde Park and Solstice on the Park, both in Chicago, foreshadowed the formal decisions made at One Hundred. But while those two buildings manipulated the skin solely in the horizontal or vertical axis, respectively, the faceted facade of One Hundred contorts in both directions, maximizing views and daylight. 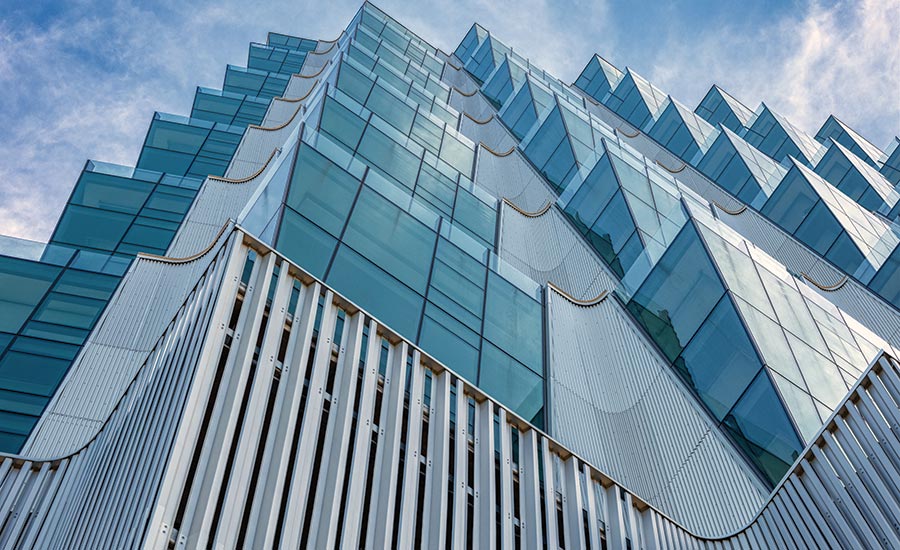 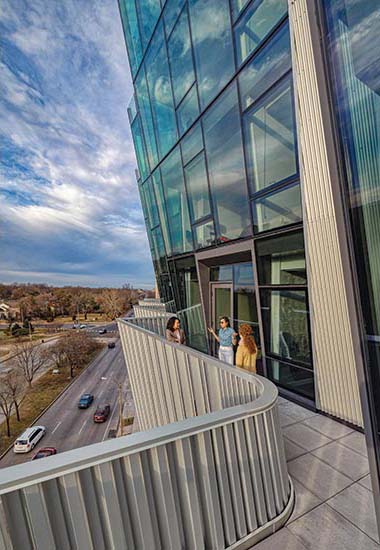 The splaying of the exterior wall was born from the desire to connect residents with the outdoors. Among the client’s initial goals for the project was for a quarter of the units to have exterior space. By pushing the envelope outward, the “roof” of each tier becomes a terrace for the first floor of the tier above. The outward thrust comes with a trade-off: the units at the top of each tier have more enclosed space, while units at the bottom are smaller but offer private terraces. The curtain wall’s slant also improves thermal performance: it reduces solar heat gain in the summer, when sun angles are steeper, but permits lower winter rays. This geometry was not without its challenges: the building required a structural strategy to support the cantilevering floors of each tier. To achieve this, the concrete structure is braced by a vertical core within the northern portion of the floorplate. At the perimeter, the columns align vertically throughout the building but are adapted into a wedge-shaped profile that transfers the load of each additional floor. 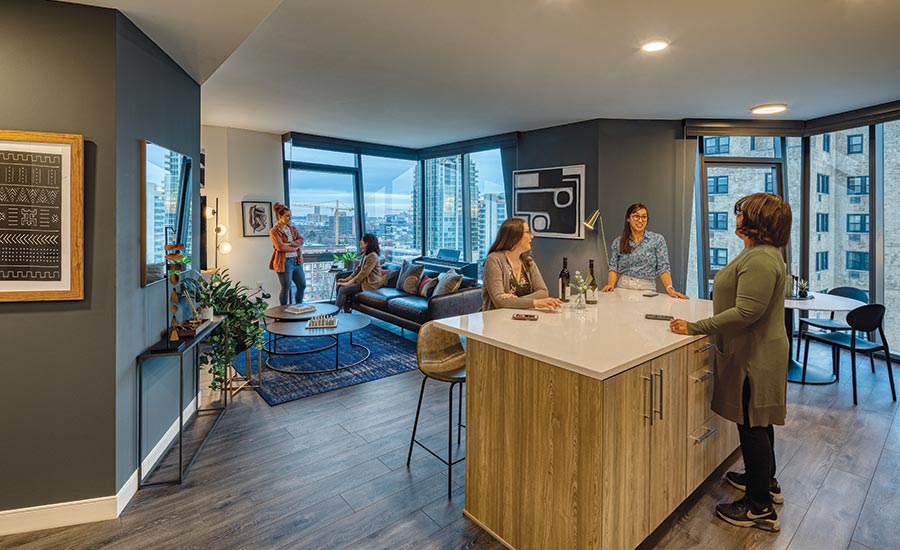 The shape of the floor plate was inspired by the plant life of Forest Park: the plan resembles the outline of a leaf, with jagged edges symmetrical around a central north–south spine. The corridor forms a central axis, and each unit rotates south about the spine, maintaining a 90-degree glazed corner at each living room. This essentially makes each apartment a “corner unit” with multidirectional views. Studio Gang took particular care to ensure that there is a direct view to the exterior from the entrance to each unit, adding to a feeling of openness in the nonorthogonal layouts. 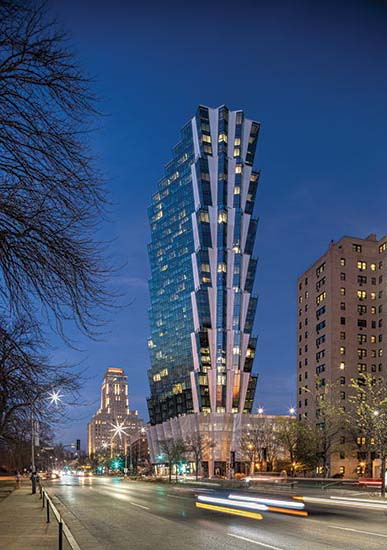 The subtle rotation of the units results in a building that appears to be different from virtually every angle. The materiality of the exterior skin plays a critical role in this respect. The facade alternates between regions of transparent curtain wall glazing and corrugated anodized-aluminum rainscreen panels. According to the design team, the material decisions were inspired by the stainless steel of the Gateway Arch and the way it reflects its environment. This textured expression, as opposed to the minimal appearance often associated with curtain wall construction, feels appropriate in the historic brick-and-masonry character of its context. The facade is wonderfully dynamic, particularly as seen from Forest Park, where the tower has a strong visual presence. The pattern of transparent curtain wall and aluminum rainscreen enhances the experience of the building “in-the-round.” From the north, the aluminum shards dominate while, from the south, the curtain wall makes the building appear more open and transparent. The material expression is consistent from base to top; at the podium, the anodized aluminum panels become a striated screen of vertical Z-channels, allowing for natural ventilation at the parking levels and contributing to the project’s sustainability program.

One Hundred is full of inflections: between downtown and Forest Park, between the city’s past and its future. It serves as a bold new landmark for the Central West End that still subtly responds to the context through its massing, geometry, and materiality. The tower adds to the rich and layered history of its neighborhood while embodying an optimistic outlook for the city of St. Louis. 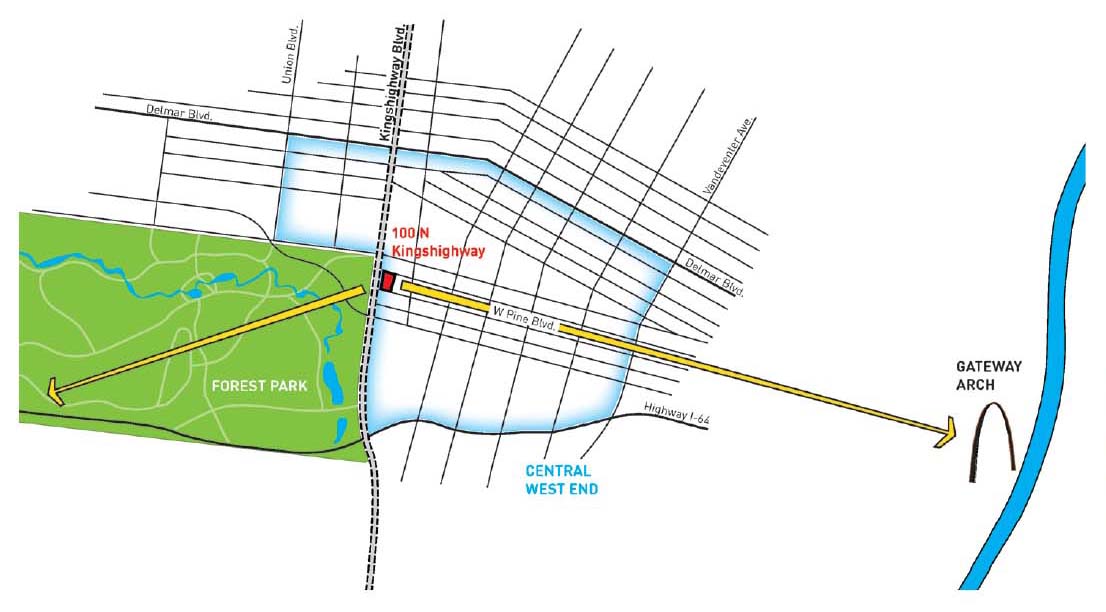 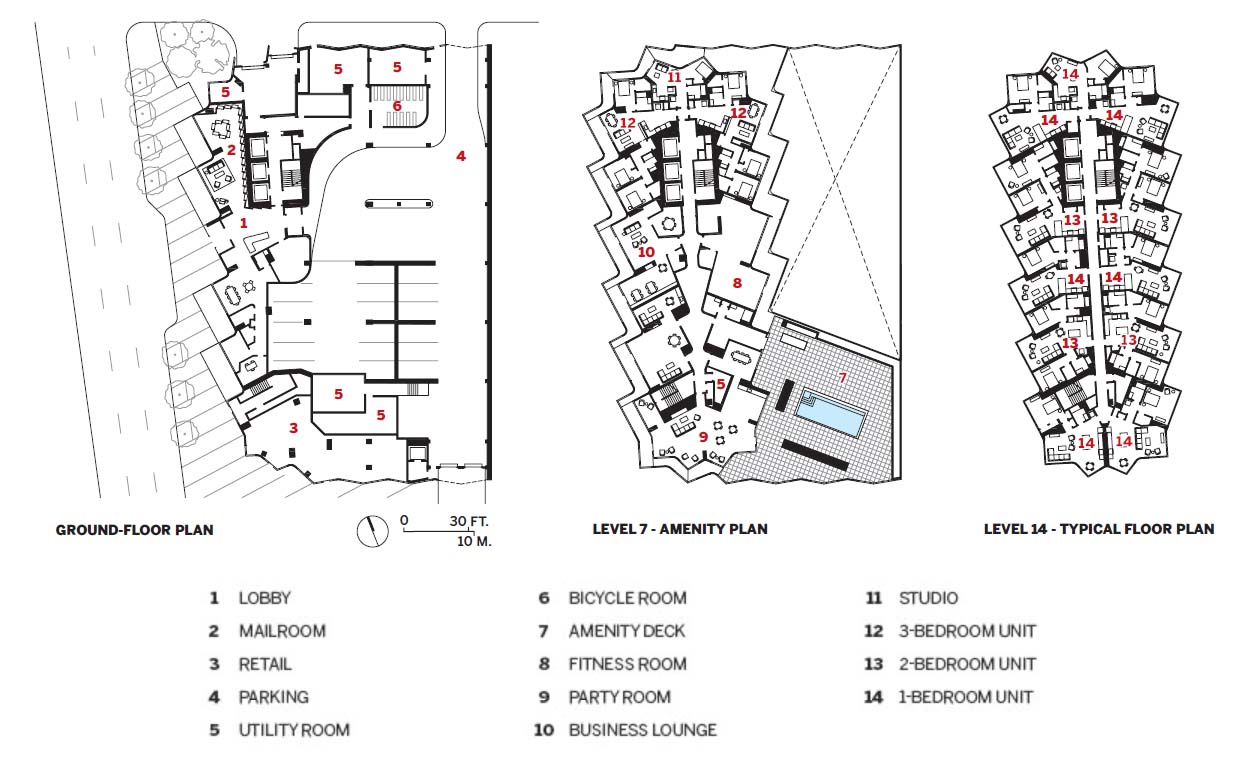 John Knuteson is a practicing architect and educator based in St. Louis.