A Variety of Strategies

Projects from around the country reflect an array of inventive affordable approaches.

A challenge announced by C40, a global consortium of major cities fighting climate change, intrigued Chicago architect Jeanne Gang. “Its goals are really ambitious—things that make people say, ‘It can’t be done.’ I was attracted to that,” says the founder of Studio Gang. C40’s Reinventing Cities competition asked architect-developer teams to design affordable, equitable, and sustainable housing for real sites. Studio Gang entered with The Community Builders, a self-described “mission driven” developer. The team won in June with its plan for Assemble Chicago, a 20-story building on an empty lot within the city’s downtown Loop. The area has “a lot of workers making between $25,000 and $35,000 a year,” says Gang, describing the target market for the 207-unit building, which is expected to cost $102 million. The studio, one-bedroom, and two-bedroom apartments will be rented to those making between 30 and 80 percent of the median income for the Chicago area, now about $90,000 for a family of four. The tower will rest on a podium, called NeighborHub, featuring a food hall for minority-owned restaurants, office and meeting spaces for nonprofit groups, a health clinic, and a grocer. Such measures as modularizing the facade and building it in a factory will keep costs down, Gang says.

Using glazing on just 25 percent of its envelope, the tower offers proper daylight without excessive heat loss or gain and keeps operational energy use low. Reducing embodied energy is also in the mix, literally: concrete will be made with industrial byproducts in place of much of the cement. The building’s footprint is too small for a meaningful array of PV panels, so it will join nearby buildings in a community solar grid. Gang embraces C40’s goal of replicability. “The building,” she says, “should be an example people can point to.” Fred A. Bernstein 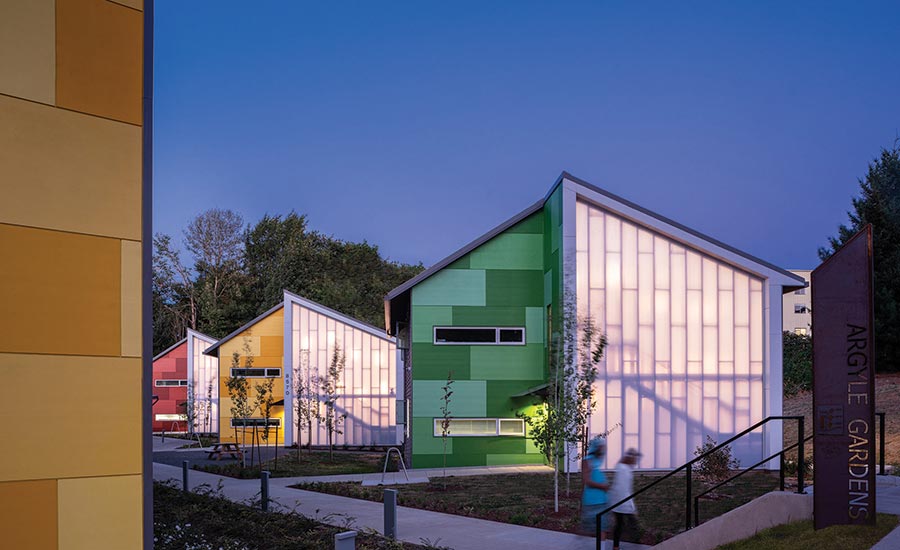 Argyle Gardens, in Portland’s Kenton neighborhood, aims to be a stepping-stone on the path out of homelessness, with rents as low as $300 a month. A long, rectangular building contains 35 200-square-foot studio apartments, as well as community gathering spaces. It faces three small buildings, each containing 12 100-square-foot single-room-occupancy units, six upstairs and six downstairs, along with two bathrooms and a communal kitchen on each floor. Ingeniously, each building can be described as a pair of six-bedroom apartments, so the design can be employed anywhere duplexes are permitted, says Dave Otte, principal in charge of the project for Holst Architects.

Funded with Oregon Low Income Housing Tax Credits, the complex was built on a tight budget. The units were prefabricated right in Portland, lowering construction costs significantly and reducing shipping expenses. Otte clad the buildings’ stairwells in translucent polycarbonate, an inexpensive material that creates a lantern effect at night and maximizes solar gain by day. (That keeps the stairwells warm in winter. Insulation and ventilation keep them cool in summer.) The architect created attractive front facades by simply varying the color of paint on fiber-cement board. F.A.B. 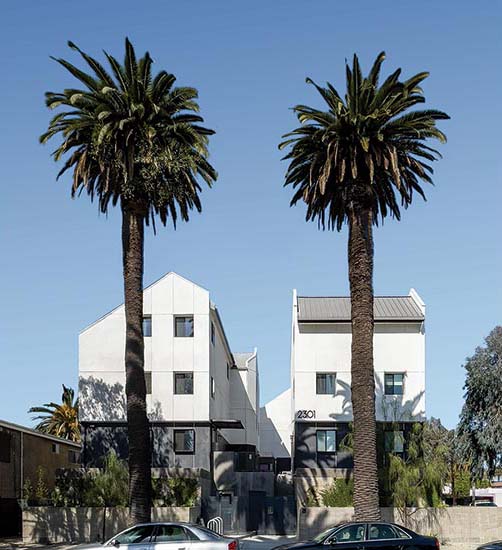 An alternative to traditional multifamily housing, co-living projects offer unrelated people the chance to have their own bedrooms and baths while sharing cooking and living spaces. Aimed mostly at young professionals accustomed to using car- and apartment-sharing apps, such projects are more affordable, because fewer kitchens and living rooms need to be built.

Tighe Architecture, which recently completed three co-living developments in Los Angeles and has more on the boards, designed West Adams Co-Living as a set of five townhouses sitting on top of a parking podium and looking onto a raised courtyard in the center. Each three-story townhouse has six bedrooms and one common kitchen and living area.

Respecting the scale and massing of buildings in this mostly residential part of Mid-City Los Angeles, Tighe designed the 17,800-square-foot project as a cluster of Monopoly-like houses with gable roofs, white stucco walls, and punched windows. The complex reads as a small village, immediately communicating the notion of community. The courtyard on top of the concrete parking podium offers a variety of tables, chairs, and couches for residents of all the townhouses to share. By raising the residential blocks above the courtyard and podium, Tighe provided bedrooms with unobstructed views of the Hollywood Hills, Downtown L.A., and Culver City.

“The simplicity of the West Adams building form takes cues from the stucco gable-roofed building typology familiar throughout Los Angeles,” says Tighe, who founded his firm in Santa Monica in 2001 and has deep roots in the city.

The units are fully furnished and include utilities, Wi-Fi, on-site washer/dryer, and weekly cleaning, so they work well for people new to the city or those who will be in town for limited periods. Rents for the bedrooms range from $1,100 to $1,385, according to a recent listing, compared to $2,100 for a traditional unfurnished studio apartment in the West Adams area. Clifford A. Pearson

Side By Side
Cleveland

Designed for people of different ages and capabilities, Side By Side offers a number of twists on the co-housing model. Instead of targeting a single type of resident, it provides shared housing for families and singles, able-bodied people and those with physical and developmental issues. The project, designed by the New York firm Brandt: Haferd, was the winning entry in a “zero threshold” competition run by the nonprofit North Coast Community Homes, which operates more than 200 group homes for developmentally disabled people in Northeast Ohio. The five-unit building occupies a double lot in the mixed-income, racially diverse Old Brooklyn neighborhood of Cleveland.

The architects K. Brandt Knapp and Jerome Haferd conceived of the project as a pair of three-story houses connected by a large double-decker elevator inspired by the movable room at the center of Rem Koolhaas’s Maison Bordeaux (1998). Communal spaces wrap around the central elevator, encouraging residents to interact with each other. A large kitchen on the lowest level, a deck on the roof, and a garden in the back serve as additional areas for people to socialize in.

While the competition called for a project on two lots, Brandt and Haferd included a community garden and park on an adjacent third lot. They even added a bus kiosk at one end of the garden to further tie their project to the surrounding neighborhood. “We wanted to use domesticity to deal with urban issues, such as the lot,” says Haferd, who approached the project as one piece in an urban puzzle. Organizers of the competition are still raising funding and gathering a broader coalition of partners, but plan to move forward, says Haferd. C.A.P.

Its 2.65-acre site—a longtime city-owned parking lot—straddles a canal across Venice Boulevard from the historic district. RDC’s buildings—two sand-toned stucco-clad full-block structures, rising three stories and totaling 104,000 square feet—will provide half of its units to homeless people (with supportive services), 25 percent to low-income artists, and 25 percent to other low-income households. The estimated $75 million compound will include a community arts center, a café, small-scale retail/microenterprise space, roof decks, and both residential and public parking. Instead of outwardly expressing the individual units, architect Eric Moss says he favored “big, warping, morphing gestures,” with smaller, idiosyncratic conditions, such as scooped-back gallery spaces, within the sweeping forms.

Those large gestures, however, have prompted opposition. Some neighbors, while supporting affordable housing, object to the scale jump from the historic district to RDC’s monolithic sloping, geometrically hyperbolic walls, which some liken to fortresses. Others question the concentration of units in one place instead of dispersing them around Venice. And, despite the town’s progressive leanings, NIMBYism exists. The project still has hurdles ahead, including more public hearings and full L.A. City Council review. Sarah Amelar 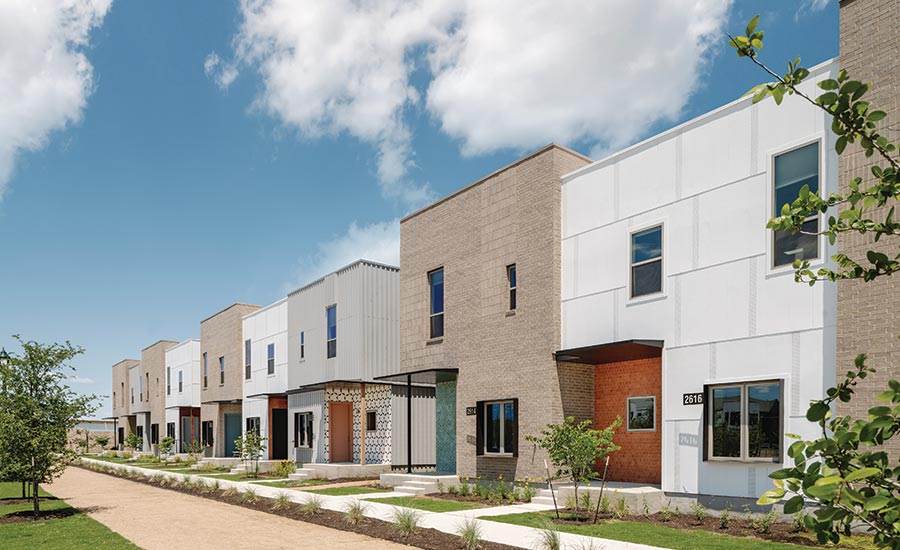 Habitat for Humanity mainly builds single-family homes, “but single-family shouldn’t be the model for housing everywhere,” says Michael Hsu, founder of Michael Hsu Office of Architecture in Austin, Texas. The firm, best known for stylish stores and restaurants (and Austin’s South Congress Hotel), proved his point with a row of 11 attached houses in Mueller, a planned community on the site of the city’s old airport. Austin Habitat for Humanity’s first multifamily project, it had to satisfy a design-review board, the Mueller New Construction Council.

At the same time, Hsu aimed to give residents a sense of ownership. “We wanted to make sure it didn’t look like quote-unquote affordable housing,” Hsu says. “But on these jobs, every dollar counts. There is no fluff.” So, to give each unit a distinctive look, he had to be resourceful. Unable to vary the massing of the three- and four-bedroom units, he customized them with a range of cladding materials, including tile, brick, and fiber-cement soffit boards, whose ventilation holes he used as a decorative element. Residents (all of whom committed to 30-year mortgages) helped choose the tiles and paint colors for their entries. Many of the facade materials were donated by manufacturers, as were the cabinets inside. The houses sold for an average of $186,000, at a time when the median home price in Austin is more than $500,000.

To enhance the townhouses’ presence on the street, Hsu tucked parking in the rear and placed a sidewalk and a gravel path for pedestrians and bicyclists in the front. F.A.B.

Back to “Reimagining the City” Series

Architects and Urban Thought Leaders on Design for the Public Realm

Extension of the Swiss National Museum