When Vaudeville singer, dancer, and actress Florence Mills died in New York in 1927, at age 31, nearly 10,000 fans flocked to the funeral home to pay their respects. Soon, both Duke Ellington and Fats Waller dedicated songs to her; and in South Central Los Angeles, the 1912 Globe Theater, in the city’s then-vibrant jazz district, was renamed in her honor. Yet, decades later, the theater languished as a burnt-out shell, and the collective memory of Mills was virtually lost. But now, on that site, the legacy of this legendary Black performer, whose parents had been enslaved, is reemerging in larger-than-life ways. 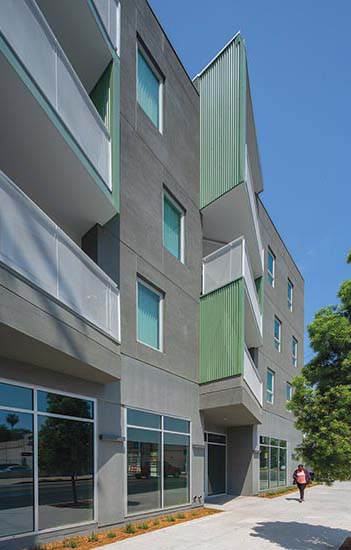 Rather than turning its back to the community, the housing engages with the the street. Photo © Jim Simmons, click to enlarge.

On that parcel, along with several adjacent ones, the nonprofit Hollywood Community Housing Corporation (HCHC) has recently completed a mixed-use, 74-unit affordable-housing complex, infused with music. The organization had always planned to name the building for the late singer, but then its designers, Culver City–based KFA Architecture, took the tribute further. “We hit on the idea of leaving two exterior walls as blank ‘canvases’ for murals,” recalls KFA partner John Arnold, “and presented the concept with vintage photos of Florence Mills, as building-scaled placeholders for the final artwork.” HCHC ran with it, engaging the community in the process.

The organization soon took a booth at the neighborhood’s popular Central Avenue Jazz Festival, inviting attendees to vote on photos of the entertainer as inspiration for the murals. Participation was enthusiastic. With the top-ranked images, HCHC elicited proposals from four California muralists and, for the final selection, reengaged community stakeholders. The commission went to 31-year-old Los Angeles artist Myisha Arellano for two electric-hued murals that integrate Mills’s likeness at billboard scale, along with quotes in her own handwriting. One painting also refers to the vocalist’s personal anthem, “I’m a Little Blackbird, Looking for a Bluebird,” a protest song asserting that everyone, regardless of color or creed, is entitled to seek and find “the bluebird of happiness.”

The completed murals are about three-stories tall and highly visible at a busy Central Avenue intersection. “I want people to look up and be curious about Mills’s history, her legacy, her art,” says Arellano. Working with an irregularly shaped corner site, KFA gave the 125,600-square-foot building a rectilinear, backward-S plan that wraps around two open-ended, tree-planted courtyards. “Back in the ’90s, when affordable housing was fortress-like, closed off from the surroundings, it was grim, hard to love, and quickly grew derelict,” says Arnold. “To succeed, housing needs to feel open, engaging, and optimistic, not barricaded and introverted.” Though only residents and their guests can actually access the protected outdoor spaces, he explains, generous sight lines from the street were important. 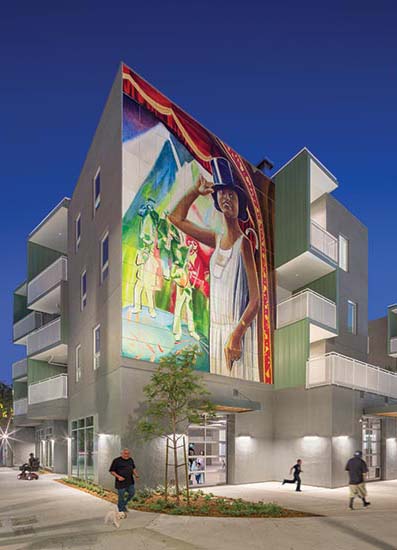 A $25.2 million construction budget (or about $200 gross per square foot)—largely publicly funded—meant a modest material palette, including ordinary stucco exterior walls over structural wood framing, but the architects used that surface, in neutral gray, as a foil for more animated elements. Besides the vibrant murals is the sinuous, zigzagging rhythm of green corrugated-metal balcony surrounds. Textured components—such as slatted wood screens around an exterior stair and along open-air passageways, and perforated-steel balcony face plates—invite the play of light across the facades. 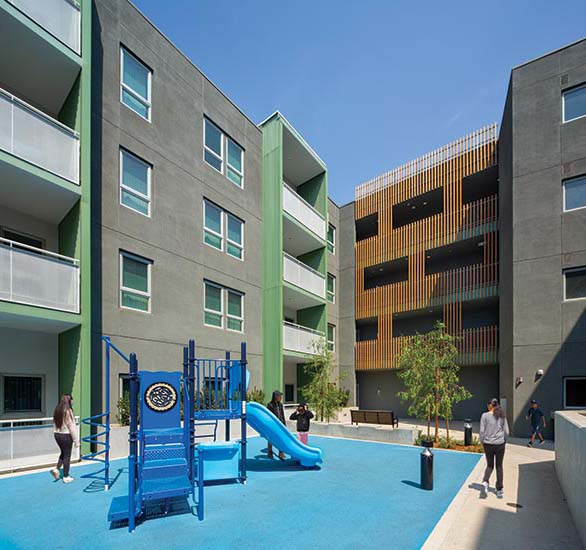 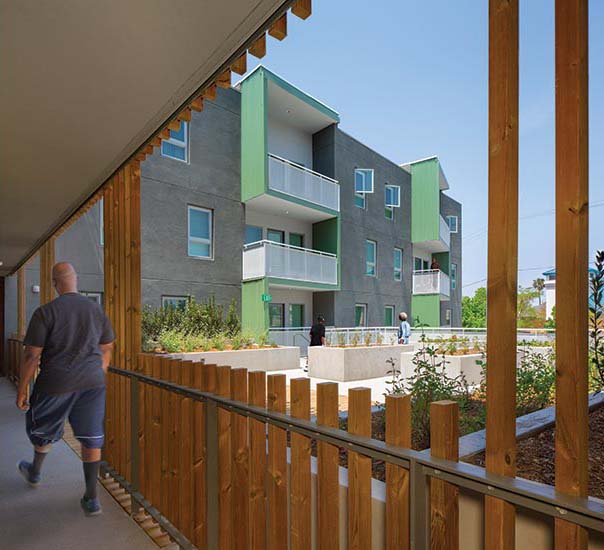 Inside, the mostly double-loaded corridors open onto one-, two-, and three-bedroom units. Qualifying tenants must meet specific low-income thresholds, among other criteria. For example, 13 one-bedroom apartments are for homeless veterans who earn less than 30 percent of area median income (AMI) and are eligible for government subsidies. Other apartments are reserved for low-income homeless, or otherwise financially distressed, families. Light-filled and airy, each unit has durable, wood-like vinyl-plank floors, solid-surface countertops, large windows, and its own balcony. 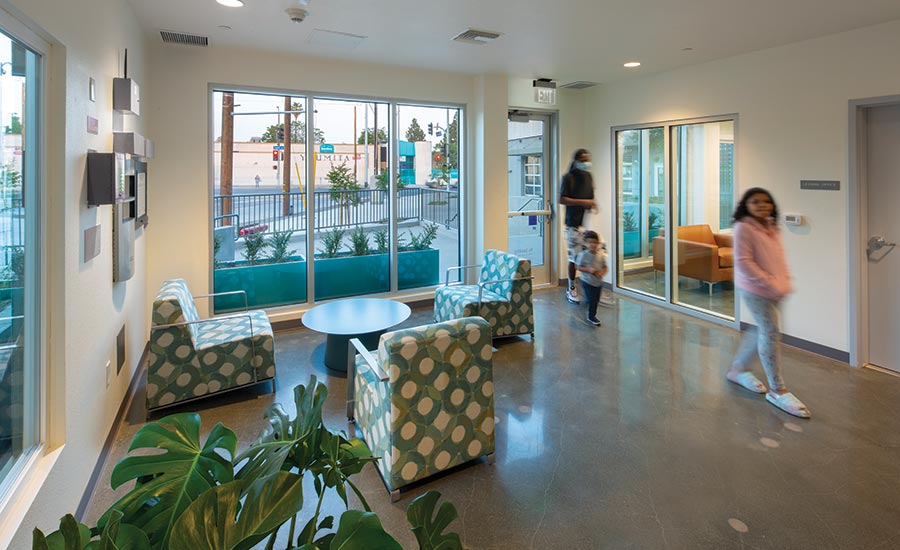 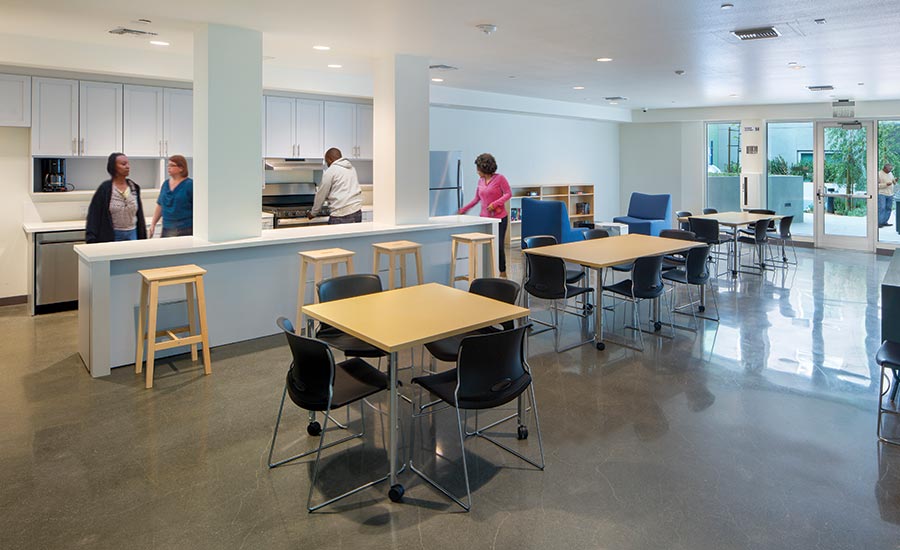 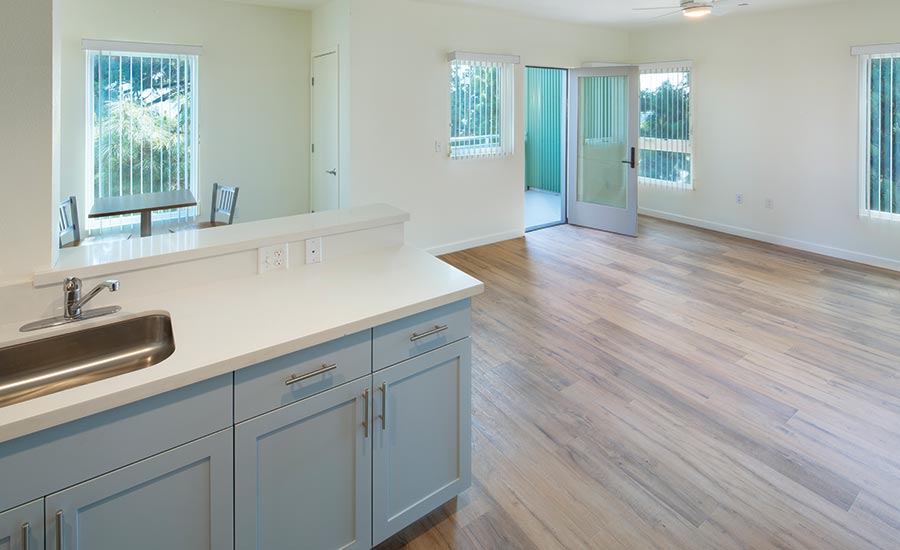 On track for LEED Platinum certification, the building also includes rooftop solar panels, plus a 5,000-square-foot ground-floor commercial space. Its tenant is the nonprofit Young Musicians Foundation (YMF). This pairing, though not originally planned, has the makings of a remarkable fit. Through an innovative partnership with HCHC, YMF will offer free music classes, instrument use, and recording/sound technology training to residents of Florence Mills, as well as another HCHC property, the affordable Paul R. Williams Apartments, across the street.

With considerable buzz around Florence Mills, nearly 4,000 people applied for its 74 units through a lottery-and-evaluation process. (Recognizing the enormous need, HCHC has other buildings across L.A., completed or in the works.) Since the official opening, last June, “people have been telling me how life-changing this has been for them,” says HCHC executive director Sarah Letts. “One formerly homeless vet described what it’s been like to finally have a home where he can feel safe, something we tend to take for granted. And a single mom with four kids—who had a job, but was still homeless—was telling me how transformational this has been for her entire family.”

Among the many positive aspects so far, says Letts, are the “unexpected synergies—from naming the building for Florence Mills to creating the murals, to getting a music nonprofit to occupy the ground-floor space, to the fact that we’re right on Central Avenue, the historic hub of jazz and culture in South L.A. It all came together, some of it through luck and some through sheer determination.”

Click here for a case study on HCHC’s more extensive work in the neighborhood. 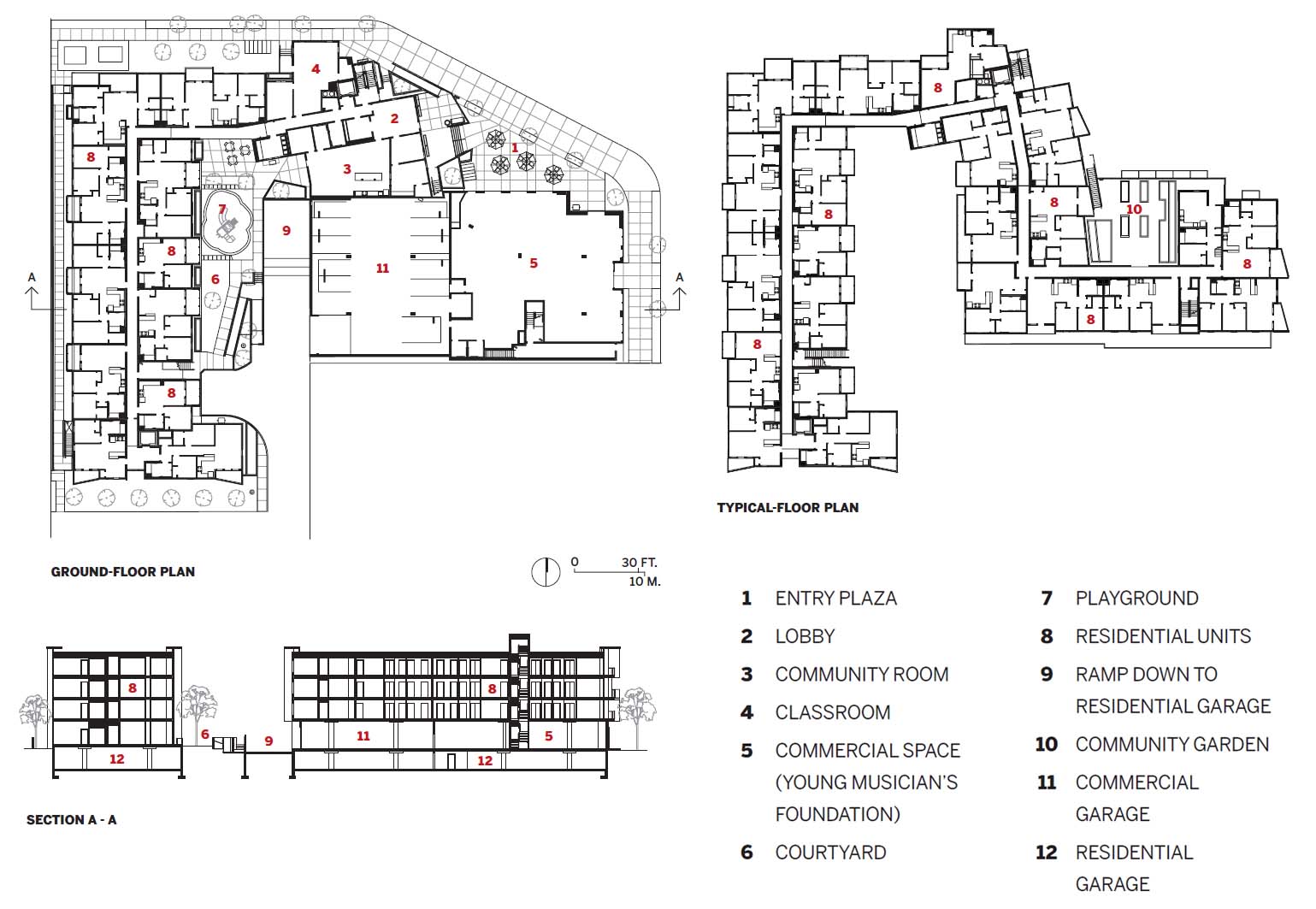