“Our ambition is to create the finest urban hotel in the world,” says Éric Fratty, Design and Construction Director at Maisons Cheval Blanc (MCB), the exclusive LVMH-owned hotel company, which was founded by LVMH Chairman and Chief Executive Bernard Arnault himself, in 2006. Fratty was speaking a day before the opening of MCB’s fifth address, their first in Paris, located in part of the mythic La Samaritaine department store, which the LVMH group has just spent $900 million redeveloping (for a review of the retail revamp, click here). Since it enjoys by far the best views, the riverside wing of the store was set aside for the hotel, a part of the complex completed in 1928 by architects Frantz Jourdain and Henri Sauvage, who dressed up their steel-framed structure in monumental Art Deco façades. Following a competition, in 2010, MCB appointed French architect Édouard François to undertake the conversion and New Yorker Peter Marino to oversee the interior design. 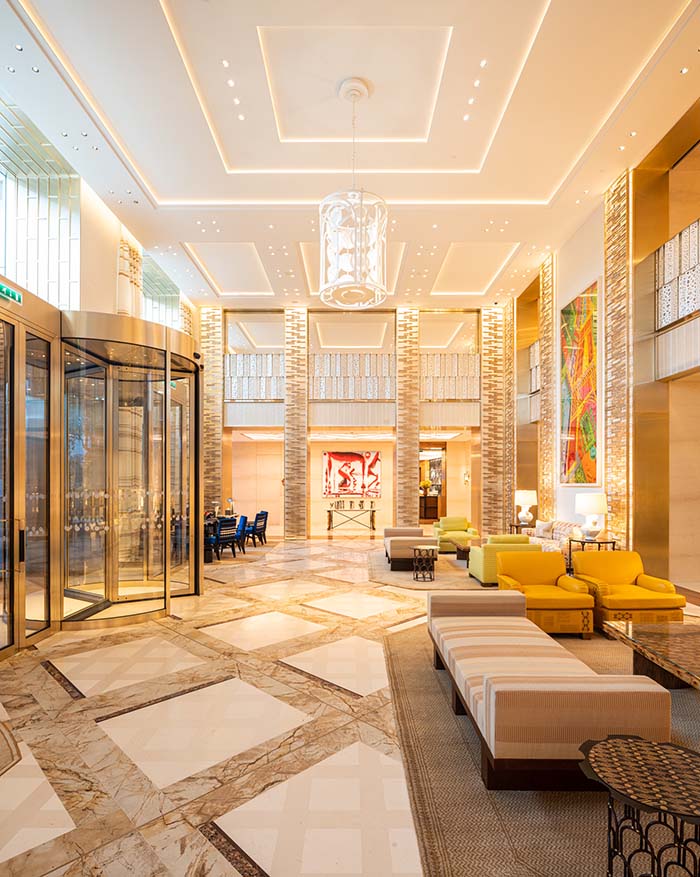 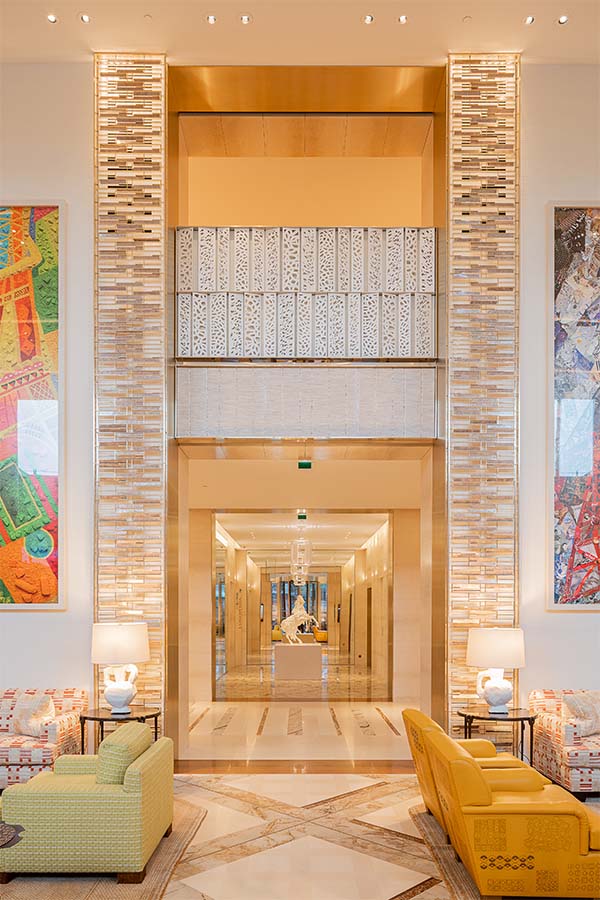 “Among the competition entrants, Édouard François made two proposals that no one else did,” explains Fratty. “First, he placed all the bedrooms on the exterior facades, where the other architects included guest accommodation around the building’s interior lightwell. Second, he insisted that the hotel have a rooftop terrace and restaurant on level eight, which a decade ago wasn’t nearly so obvious a thing to do.” On first visiting the building, says François, “I was very impressed by the views. You can see all the city’s monuments. I wanted to make the eighth floor publicly accessible so that the hotel would become a sort of promenade allowing you to discover Paris. Now I say that if a visitor only has a day in the city, they should spend it here—you’ll see everything.” 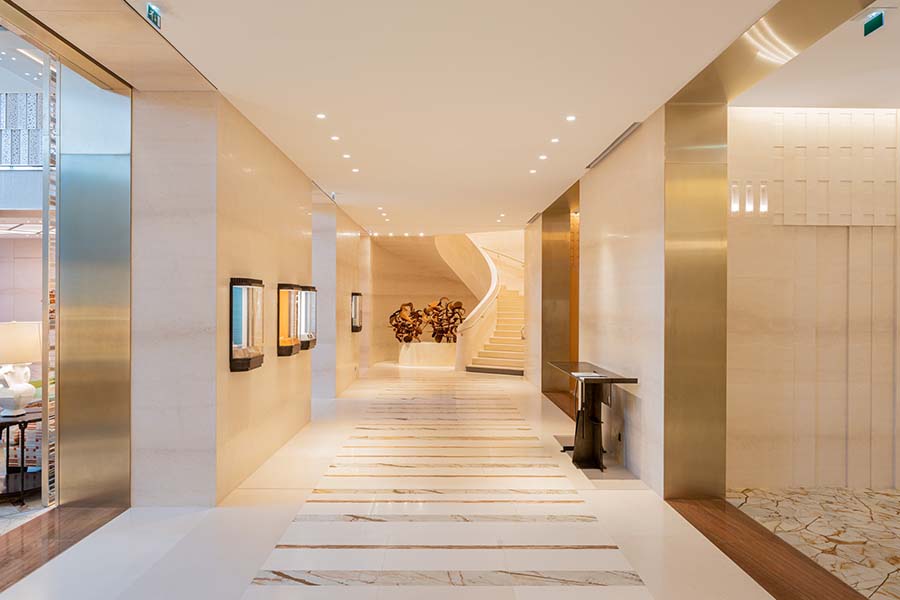 French architect Édouard François installed the battery of elevators in a former lightwell. 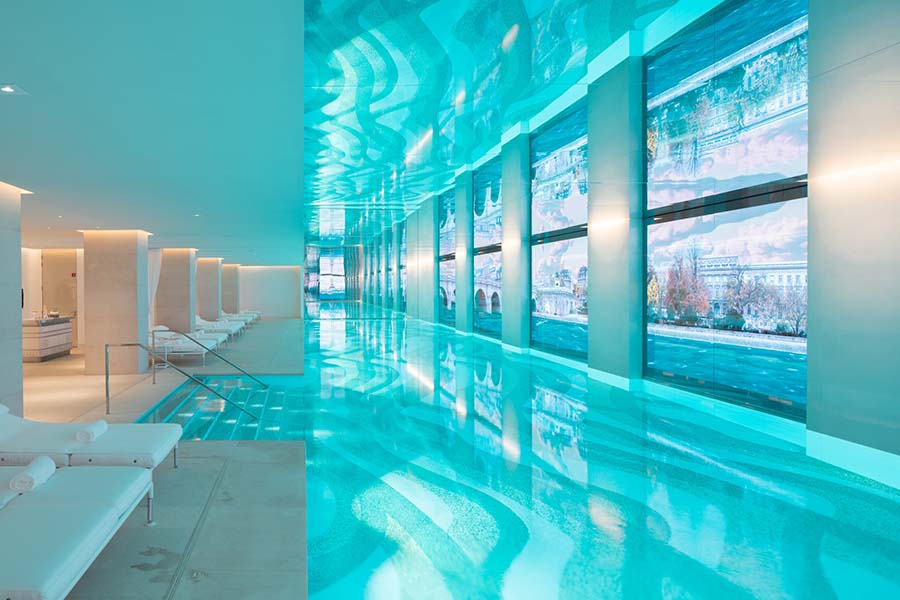 The spa features what François claims is the largest hotel swimming pool in Paris.

“To ensure exclusivity and personalization,” continues Fratty, “a Cheval Blanc hotel has a very limited number of keys.” At its Paris “house,” as MCB likes to call its establishments, there are 72 guest suites and rooms in a complex of 169,000 square feet (compared to, say, the 142 rooms and suites at the 296,000-square-foot Ritz). On the ground floor, a double-height lobby accesses the street-level tea room/bar and the battery of elevators that François has installed in the former lightwell; down in the basement there is a spa featuring what François claims is the largest hotel swimming pool in Paris; a gourmet restaurant is located on level two; suites and bedrooms occupy levels three to seven; while the level-eight restaurants offer stunning views from their Seine-side balconies, and link up to the roof terrace at the rear, which fills the space around the skylight on top of the store next door. That leaves two additional floors above, which, under French regulations, are too high up to admit large numbers of people without having firemen stationed 24/7 on site. Instead, they have been converted into the most luxurious suites of all—two duplex penthouse apartments of 3,700 and 7,000 square feet, which can also be combined as one (almost 11,000 square feet), with a giant private roof terrace (which is not something you’ll find at the Ritz). So exclusive is this part of the hotel that MCB refuses to release photos of it or make public the cost of hire. 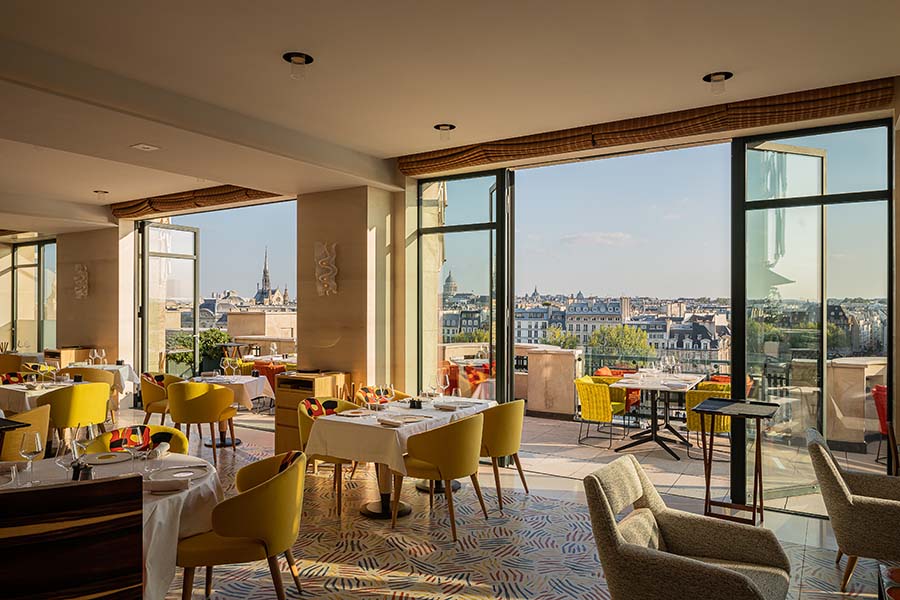 Wherever you sleep, you’ll enjoy breathtaking views. Sauvage’s giant window bays turn each room into an oversize floating goldfish bowl, while glass-walled bathrooms allow Paris to be savored from the tub too. François’s decision to make level eight accessible to non-residents meant that, in the name of exclusivity, the number of front-of-house elevators and staircases had to be doubled so that guests can move around the building without running into the hoi polloi. There was also the question of staff access, the former lightwell again proving useful for the discreet movement of personnel. But there simply wasn’t room to squeeze in all the back of house, meaning that the 450 staff members—“ambassadors” in MCB jargon—are located on a side street in a separate, ancillary building, which is linked to the hotel proper via two basement levels. 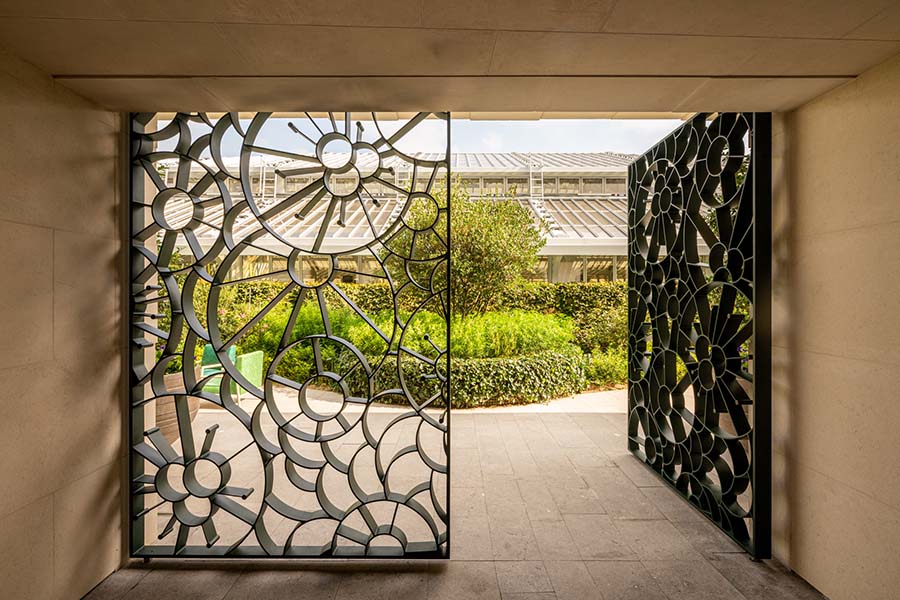 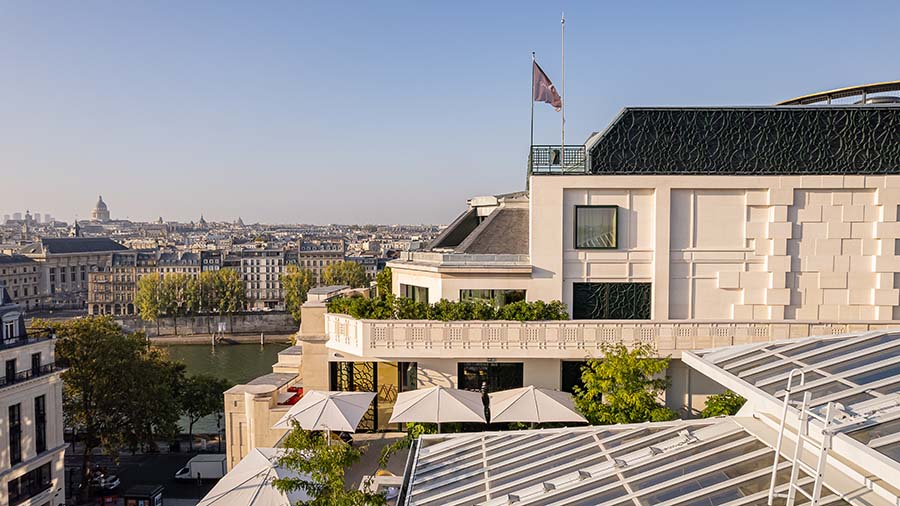 A roof terrace at the rear of the eight floor fills the space around the skylight on top of the store next-door. Photos © WEARECONTENTS

“Since Paris comes right into each room, it seemed rather prissy to decorate the hotel in a classic French style too,” says Fratty. “Instead we sought to be different and contemporary, while celebrating French knowhow.” Despite calling almost exclusively on French artists, designers, and artisans, as well as sourcing vintage French furniture and artworks, architect Peter Marino has produced the nearest thing to Dubai this side of Marseille—an impression that Frank Gehry’s specially commissioned statue of a white horse (MCB’s symbol, which greets you by the elevators) does nothing to dispel. Had you any doubt, this deluge of bling makes it quite clear which sort of clientele Cheval Blanc Paris seeks to seduce. 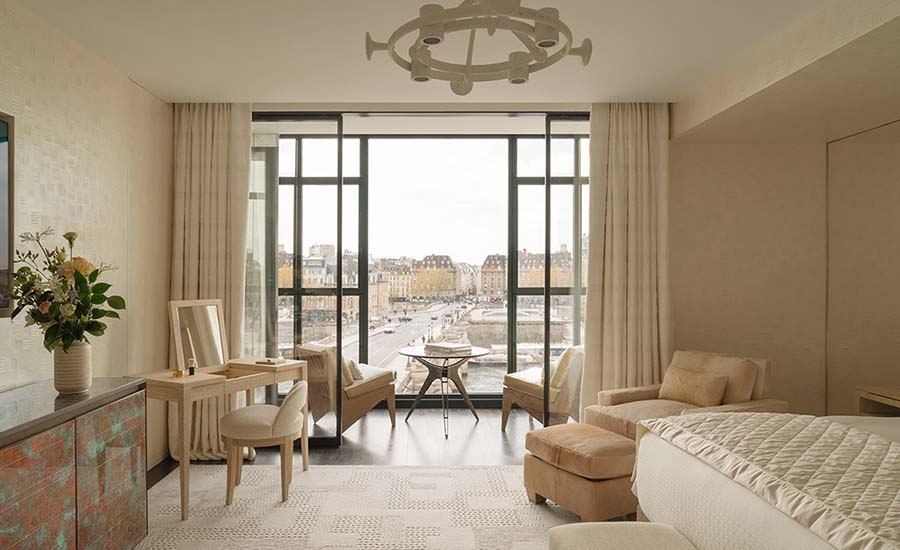 Glass-walled bathrooms allow Paris to be savored from the tub too.