“It was a semi-desert climate here. Officially—we measured it,” says Belgian landscape designer Bas Smets, standing by the large, limpid pool in his new 8.35-acre park at the LUMA Foundation in Arles, an ambitious arts and culture campus created by Swiss billionaire Maja Hoffmann on the site of a disused railroad repair yard (RECORD, June 2021 and February 2017). “I remember walking down here with Maja the first time she invited me: she told me she wanted to give the people of Arles a garden, and I thought, ‘A garden?! This place was scraped down to the bedrock—there’s no water, there’s no soil. How are we going to make a garden?’ ” The challenge was exacerbated by the local climate, with its scarce rain, its torrid summer sun, and its mistral, the infamous wind that blasts Provence from the north, chilling the landscape in winter and causing forest fires in summer. As a result, the LUMA site was decidedly harsh much of the year, which makes Bureau Bas Smets’s transformation all the more remarkable—a dry, dusty, mineral, rectilinear landscape of industrial dereliction has given way to a temperate, naturalistic haven of trees, grass, and crystal-clear water. 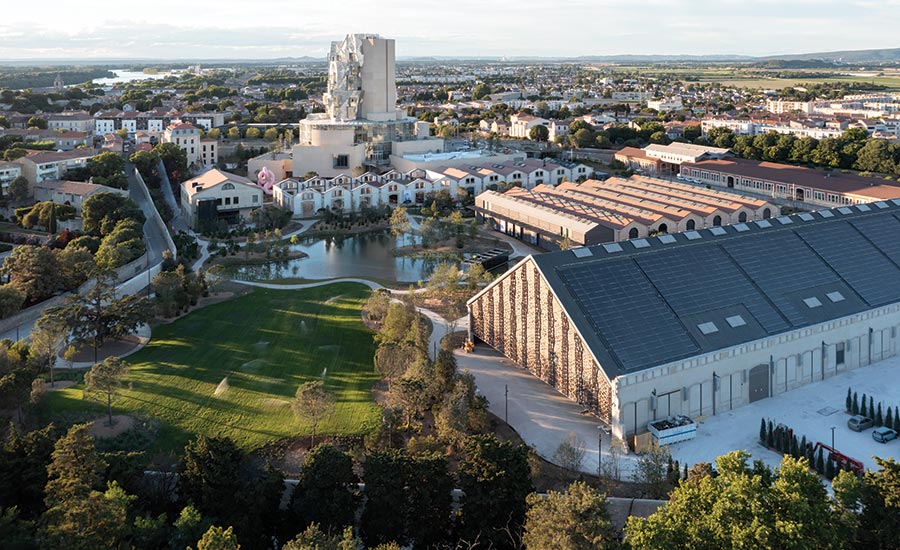 Water, pumped from a nearby canal into the pool, is naturally filtered before draining to a cistern that feeds irrigation devices. Photo © Iwan Baan, click to enlarge.

This is not, however, the unsustainable equivalent of creating a golf course in the desert—Smets and his team were far more principled than that. Where water was concerned, it turned out there was a canal nearby—dug in the 16th century to irrigate the arid region—that could be tapped into (LUMA’s needs are nothing in comparison to what the local farmers pump from it). “In the beginning,” says Smets, “I thought we had to work with the industrial traces: the railroad tracks, the flatness, the orthogonality. But that was a dead end in this inhospitable context. So then I thought, ‘What would nature do? In 100 to 200 years’ time, how would natural forces have rewilded this terrain?’” He conjectured that the mistral would bring in sediments and, with this in mind, designed a topography of “dunes” that slope softly toward the wind and more steeply away from it, so that in summer visitors can enjoy the breeze in the shade of the trees, and in winter soak up the sun out of the mistral. He then set about creating a microcosm of habitats from the surrounding region, reproducing in miniature three typical biotopes: the Camargue wetlands, located around a central pool; the dry woodlands of the Alpilles mountain range; and the steppe of La Crau, formed from pebbles and clay. Conscious of the park’s public role in a town with few green spaces, Smets introduced 56,000 square feet of lawn, including a magnificent main sward that, by rising 12 feet, hides the perimeter wall, creating the illusion that distant trees are part of the park. What’s more, this artificial hillock, made from rubble excavated when digging the pool and the foundations of Frank Gehry’s LUMA tower, provides an ideal setting for outdoor concerts.

“This is a climate machine,” concludes Smets. In late June, when afternoon temperatures reached 88° Fahrenheit, 323 cubic feet of water a day were being lost through evaporation. “Which is great,” he explains, “because that, and the presence of 80,000 new plants, is what creates the cooling effect. Though it may look classically romantic, this is a form of techno-nature.”