This website requires certain cookies to work and uses other cookies to help you have the best experience. By visiting this website, certain cookies have already been set, which you may delete and block. By closing this message or continuing to use our site, you agree to the use of cookies. Visit our updated privacy and cookie policy to learn more.
Home » Elizabeth Diller Creates Light Show for Bill T. Jones’ "Deep Blue Sea"
Architecture NewsCommentary & Criticism

Architects facing the blank screen confront the necessity of invention when they have to create something from nothing. But the blankness was especially daunting for Elizabeth Diller of Diller Scofidio + Renfro (DS+R) in her set design for “Deep Blue Sea,” when she faced 38,000 square feet of blankness in the cavernous Drill Hall of the Park Avenue Armory in New York. The size of the floor area for the sprawling dance opera by the legendary choreographer Bill T. Jones lands somewhere between a football field and the concourse at Grand Central Terminal.

But besides the monumental scale, the challenge for Diller was how—as an architect trained to think three-dimensionally—to design in a flatland of two dimensions. There were no walls bordering a conventional proscenium stage, not even an invisible fourth wall: the only “wall” in this theater in the round, ringed by bleachers, was simply the ground. The floor acted as a screen on which the set design was projected. Time was the third dimension. For nearly two hours, the projections shaped changing floor plans that supported a story told through music, Jones’s own narration, and his specialty, expressive movement. 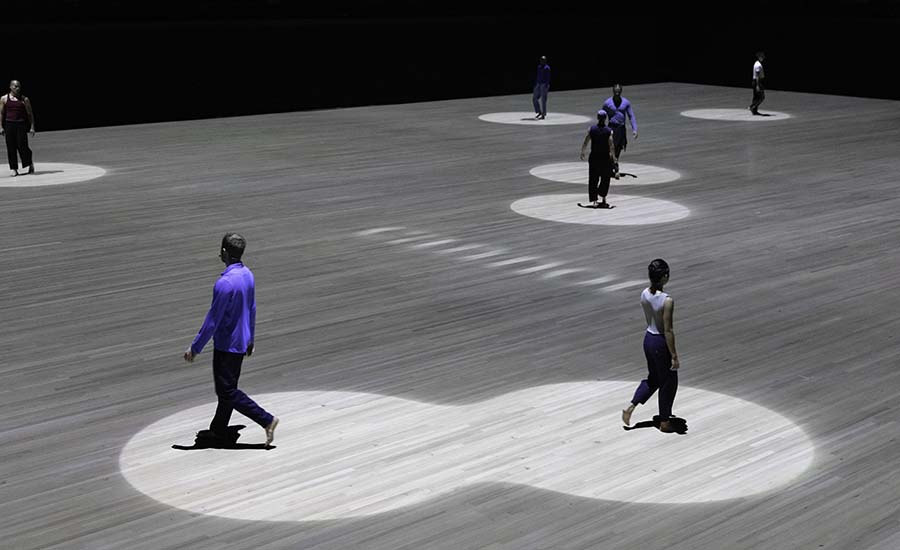 “Deep Blue Sea” is as broken and non-linear as a Beckett play, its message constructed as a collage of media to raise awareness about America’s fraught social conditions around racial injustice and inequity. Jones opens his saga with the tale of Pip, the Black cabin boy in Moby Dick—and then proceeds to Martin Luther King’s “I Have a Dream” address of 1963. In this sustained cri de coeur, Jones layers dance, music, song, speech, digital design, high-tech effects, and word art into a gesamtkunstwerk.

With a career based in performance art and architecture, Diller came prepared for the show. Since the 1980s, she has used concepts as bricks-and-mortar, creating what has been called “cultural space.” DS+R’s more recent participation in the design for the 1.5 mile-long High Line in New York was arguably an urban performance piece, staged on an abandoned elevated rail line that opened short and long views into the living city. In 2018 Diller compounded the organic urbanism by staging the Mile-Long Opera on the former tracks, where 1,000 singers, dispersed within the digitally organized landscape, sang to strolling pedestrians.

At the Armory (where the show concluded a 12-day run last week), she upgraded her digital toolbox by collaborating with New York projection designer Peter Nigrini, as they combined theatrical lighting with sophisticated video equipment to project light, shadow, and color onto the floor, from the long 19th-century iron trusses spanning the monumental space. Breaking down the vast marching field with moving carpets of light, they framed dancers as both individuals and ensembles. Think Mondrian’s “Broadway Boogie Woogie,” but with its rhythmic geometries painted on a football field in luminous pigments. Their visual armature structured and paced a fragmentary production that might otherwise have lost visual cohesion, rhythmic momentum, and its sense of urgency.

Written in light and shadow, their minimalist visual language took the form of circles, dots, squares, monumental T’s, mostly with crisp edges that sometimes fuzzed at the boundaries. The Euclidean shapes always moved and changed, shadow becoming light and light, shadow. Eclipses scanned the width of the floor, throating down space to focus on dancers. The always-changing geometries scaled the hall to the body, expanding and contracting. Yet the design didn’t deny the vastness but sustained it. 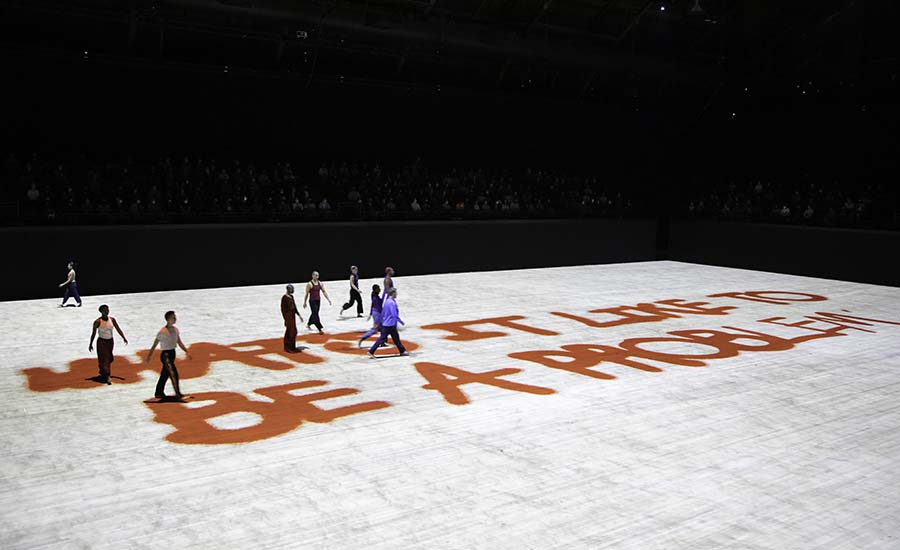 Sometimes the space was immersive: an ocean of cresting waves seen from above flooded the field, and then, from below the surface, as Pip, abandoning ship, went under. The designers soaked the floor in a blood-red sea, submerging the stage and audience in pure color and alarm.

At times, dots of light became dots of shadow that circled dancers, who wore devices to track their movement. Squares, parabolas, and rectangles concatenated, pooled, and separated in a series of witty moments where performers froze, shimmied, pranced, stomped, and sauntered in a vibrant soul dance. Cameras transcribed the revolving scrum of dancers in real-time, as their tangled figures were cast on the floor as silhouettes. Diagonal bars of light crossed each other, which then crossed wide word bars of pithy, disturbing thoughts à la Barbara Kruger, all of which passed through each other, reversing into shadow and light. The dynamic floor plan was propulsive. A drumming heart and Afrobeat paced the eery, percussive, and rhythmic score.

Near the end of the performance, dancers multiplied in number and merged into ensembles that grew into public protest. Larger groups formed new geometries that filled the stage. Waves of demonstrators, gesturing as though throwing rocks, swept across the drill hall, the waves transforming into a wall of enraged people marching and massing in a display of political power. 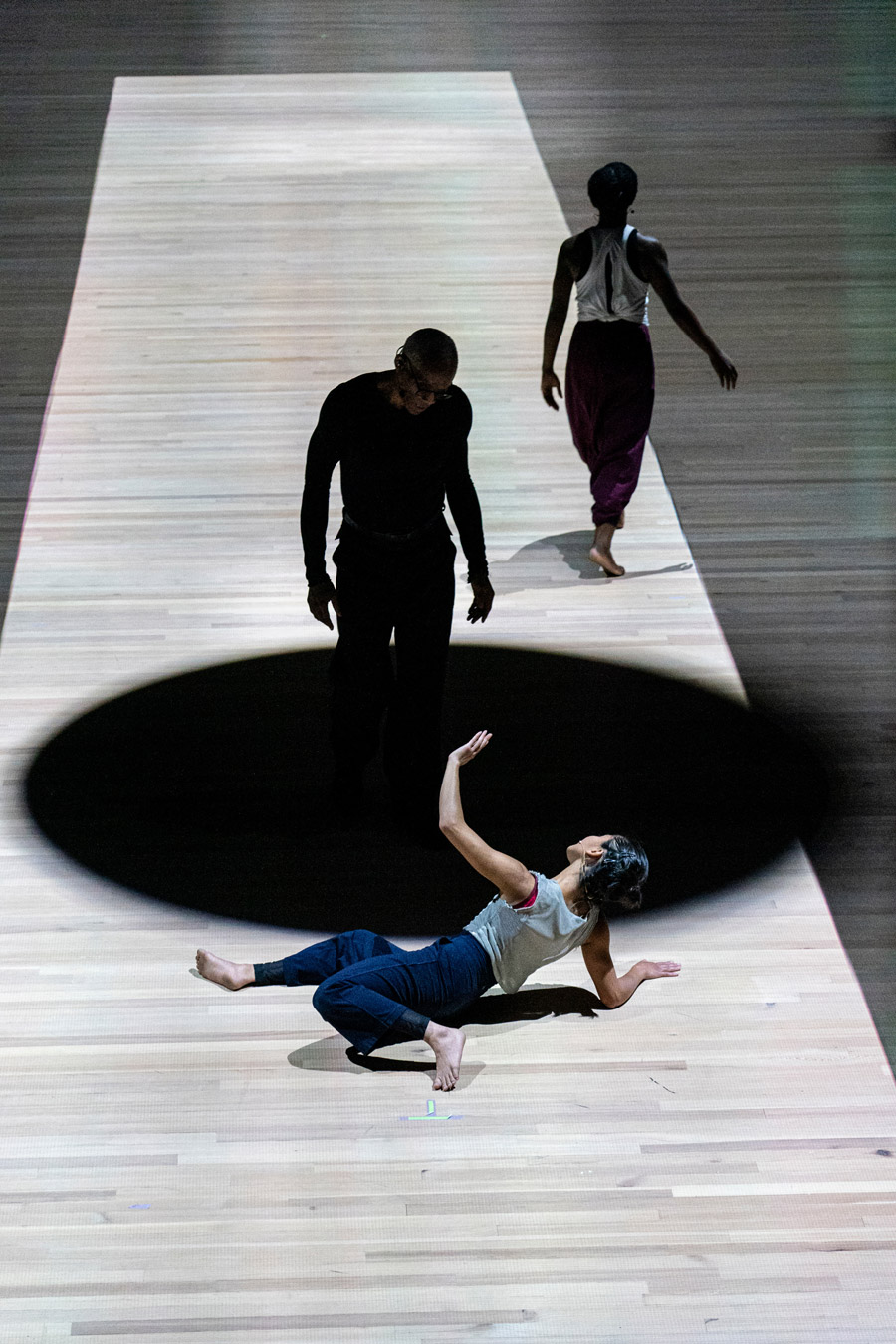 But for three-quarters of the show, the designers used light, in all its permutations, to situate the human body in space and amplify the individual dancer so that dance held and commanded the hall. The design, though ephemeral, is not decorative but structural, integral to the work, fused with the other disciplines.

The cultural matrix of the entire work is largely Black experience—history, pathos, rhythm, dance—linking the Black body and culture to a cavernous space originally built for the regimented, marching body of a dominantly white nation.

History is not over. In “Deep Blue Sea,” we witness another layer, written in sound, fury, and light.

The Shed by Diller Scofidio + Renfro with Rockwell Group