The latest exhibition from the Chicago gallery Wrightwood 659, Romanticism to Ruin: Two Lost Works of Sullivan & Wright, elicits both joy and sadness. This paean to two of America’s most celebrated designers features parallel narratives of the life and death of Sullivan’s 1892 Garrick Theater in Chicago and Wright’s 1906 Larkin Building in Buffalo. Though both met with the wrecking ball, this show—scheduled to be on view through November 27—enables us to savor their innovation, beauty, and artistry once again.

Filling the gallery’s second and third floors, the Garrick display is a collaboration among the architect John Vinci, the cultural historian Tim Samuelson, the architectural-salvage expert Eric J. Nordstrom, and the writer-artist Chris Ware, who also designed the catalogue for the Sullivan component—if you can’t get to the gallery, at least get this brilliant book. The Larkin Building exhibit, which was developed by University of Pennsylvania associate professor Jonathan D. Katz, occupies the fourth floor. Though shown through separate curatorial lenses, the buildings’ stories overlap. A Sullivan protégé who worked on the Garrick, Wright opened his first independent office on the building’s 15th floor. But, more critically, both buildings embodied technological feats and a wealth of cultural history. And both were reduced to parking only decades after completion. 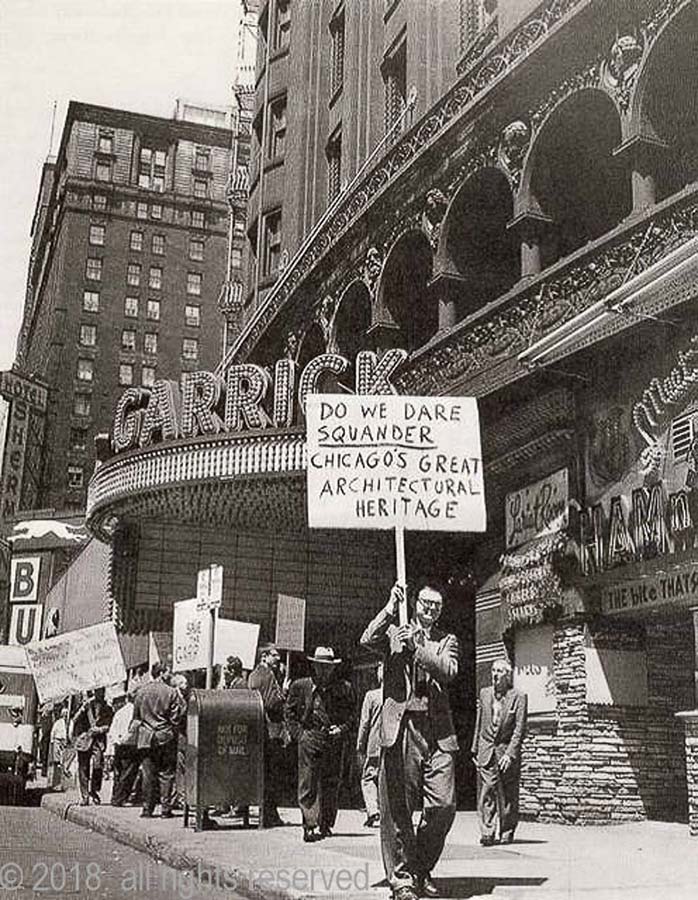 The Garrick was torn down in 1961 despite protests. Photo by Richard Nickel © Ryerson & Burnham Libraries, Art Institute of Chicago, click to enlarge.

The genesis of the exhibit traces back to 1961, when Vinci joined the architectural photographer Richard Nickel and Illinois Institute of Technology student David Norris on a mission to salvage the Garrick Theater’s ornament before demolition. Though granted landmark status, the theater was not legally protected. “The designation was purely honorific,” explains Samuelson. So, when the owners decided to raze it, the building was defenseless, despite a flurry of outraged telegrams and protest marches spearheaded by Nickel. To save face, the city charged Nickel with harvesting bits and pieces. Chiseling off whatever they could reach, the threesome prowled the dark lobbies, corridors, and the theater, where thousands of Sullivan’s “star-pod” panels adorned the proscenium’s soaring arches. The remnants were carted off to an unused airplane hangar on Navy Pier, meticulously catalogued by Nickel, and then distributed among various institutions. And, sadly, that was the end of that. 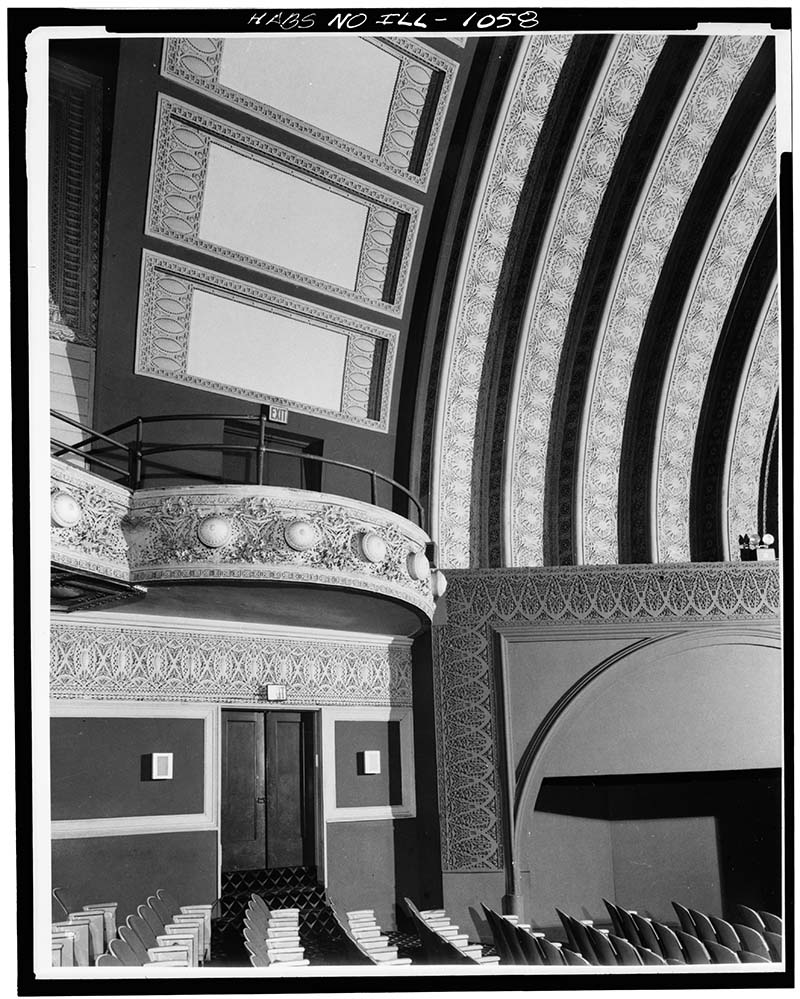 But not for Vinci. “The more we worked on the building, the more it revealed itself as a work of art,” he recalls. “That thought stayed with me.” Years later, it inspired the architect to construct CAD drawings of the entire edifice. He was fascinated by the building’s composition as well as its history. Though conceived as a center for German culture, the building endured repeated alterations, evolving from stage theater to movie palace to TV studio, as its magnificence was steadily sullied with garish signage and city soot. But this installation of colorful fragments, ephemera, photos, and drawings, as well as models and a digital film, evokes the theater’s original glory.

By contrast, the third-floor gallery documents the building’s dismantling. Rendered with muted colors and monochrome images, the space has a funereal pall. Nickel’s devastatingly beautiful wall-size photos of the skeletal building both draw and repel the eye. Like a postmortem, Vinci’s large-scale drawings are mounted in a separate room in back, enabling close study of the building’s ingenuity and intricacy.

Switching gears, the Larkin Building display touches on Wright’s architecture but focuses on the building contents—an impressive array of packaged goods and Wright-designed pieces are shown. “The Larkin Company was the Amazon of its day,” comments Katz. While it started with soap, the mail-order manufacturer produced all manner of daily use goods. Though Wright had yet to realize a commercial project, he got the commission for the building and its furnishings, including modular metal filing cabinets and desks with attached chairs to ease floor cleaning—both Larkin firsts.

Given its specificity, Wright’s building could not be sold when the company’s fortunes declined. “It was not capable of being repurposed,” says Katz. Nor could it be saved, despite Wright’s own outcry. The need for better protection highlighted here continues to haunt us today, with structures of note like Helmet Jahn’s 1985 State of Illinois Center, in Chicago, now seriously threatened. “There is a tradition of tearing things down,” laments Vinci. “But buildings are not just personal property; they have public value too.”