This website requires certain cookies to work and uses other cookies to help you have the best experience. By visiting this website, certain cookies have already been set, which you may delete and block. By closing this message or continuing to use our site, you agree to the use of cookies. Visit our updated privacy and cookie policy to learn more.
Home » Calvin and Tina Tyler Hall at Morgan State University by Teeple Architects and GWWO
ProjectsArchitectural TechnologyArchitect Continuing EducationBuildings by TypeCollege and University Projects

In 2016, the National Trust for Historic Preservation designated Morgan State University’s campus in Baltimore a National Treasure. Founded in 1867, Morgan is one of the first Historically Black Colleges and Universities (HBCUs), and the National Trust’s designation noted the public university’s 20-some significant structures by celebrated Black architects including Leon Bridges, Albert Cassell, Louis Fry, and Hilyard Robinson.

Morgan has occupied its current site in northeast Baltimore since 1917, and though the campus is rich with important buildings—ranging in style from Brutalist to Modern to Neoclassical—it also includes more than a few duds. When university president David Wilson was hired in 2010, he made it his mission to oversee a period of “capital eminence,” in which underutilized or dysfunctional buildings would be renovated or replaced, sending a message that Morgan is a preeminent research university that cares about its students and welcomes private investment. Wilson’s vision is also an attempt to keep up with the university’s highest-ever enrollment, of about 8,000 students for the last five years. 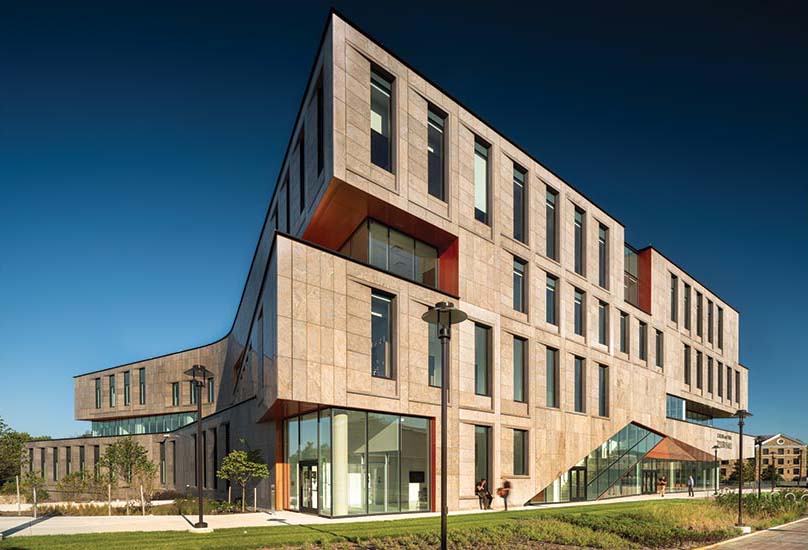 The linchpin of Wilson’s blueprint is the new Calvin and Tina Tyler Hall, Student Services Building, which opened in September of 2020. The 140,000-square-foot building, designed by Toronto’s Teeple Architects, with Baltimore-based GWWO as architect of record, is bow tie–shaped and clad with panels formed from precast concrete and 2-inch-thick Eramosa limestone slabs. 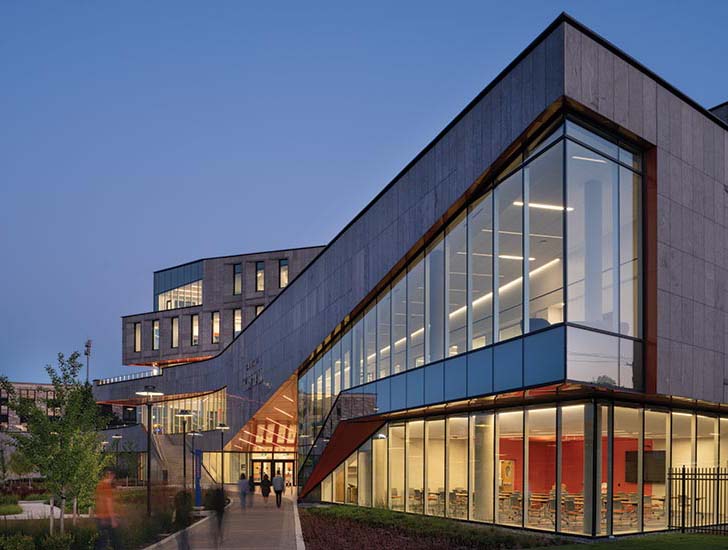 To the north, the building’s curved facade embraces a generous arrival court; to the south, its arcing form responds to the glazed, convex wing of the adjacent library. Teeple’s team conducted an exhaustive search for Tyler Hall’s limestone, ultimately finding the Eramosa in a quarry north of Toronto. “We wanted a modern, clean, sculptured look,” says founding principal Stephen Teeple, “but we also were looking for depth and texture in the facade and hoped to create a dialogue with the thickness of the old stone buildings on campus.”

The architects honed the limestone to match the dark hue of the existing buildings’ masonry, giving the panels a relief that also helps to minimize the reading of the panel joints. Rows of punched windows march across the facades and are set within angled surrounds. Tyler Hall is unmistakably contemporary, but stitches the materiality and scale of Morgan’s historic campus to the north to the modern campus to the south. “We don’t want this period of architectural newness in a fistfight with the historic and legacy buildings on campus,” says Wilson.

Housing admissions, enrollment, financial aid, work-study, the bursar’s office, and other essential services, Tyler Hall is now Morgan’s gateway. When Wilson first arrived on campus, student services were divided up among a warren of offices in a former hospital building, sending confused students running between disparate departments. “Now our front-door offices are indeed on the front side of campus and speak volumes about what this institution values,” he says.

As Teeple explains, Tyler Hall’s sculptural form and complex geometries serve a purpose beyond acting as viewsheds; they create an obvious choreography and path through the building that helps with wayfinding. At the arrival court, prospective students and visitors are drawn to the front door by a prow-like glazed corner that reveals a community-outreach lounge and a dramatic carved canopy covered in orange aluminum-composite panels. And, inside, a wood ceiling mirrors the building’s exterior curves, cladding the underside of an interior monumental stair and leading the way through clearly marked program areas.

The building navigates a 15-foot grade change from front to back, so an exterior stair and a winding ramp guide people to the southern, second-story entrance. From there, students can drop by a one-stop service hub inside the three-story lobby. Generous lounges invite lingering and study. Administrative offices and conference rooms on the third, fourth, and fifth floors are arranged around a skylit atrium. 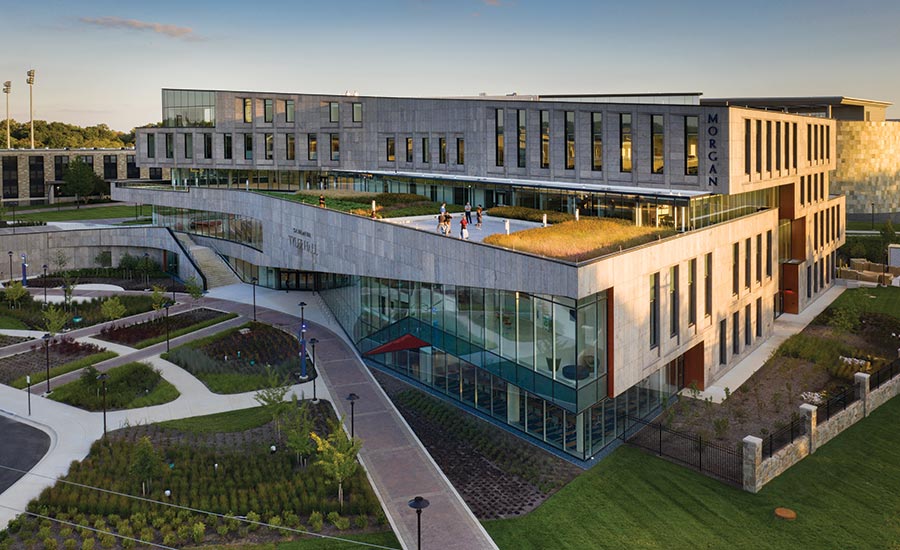 On the third floor, a 10,000-square-foot roof terrace is planted with tall grasses and native pollinator species, offering space for gatherings and events with views of campus. The green roof helped Tyler Hall achieve LEED Gold certification, as did light-colored roofing materials to minimize the heat-island effect and the use of energy-recovering HVAC systems, among other strategies. Because Baltimore is part of the Chesapeake Bay watershed, the building must comply with stormwater-runoff regulations. In response, landscape architecture firm Floura Teeter created a series of lush, terraced bioretention rain gardens. 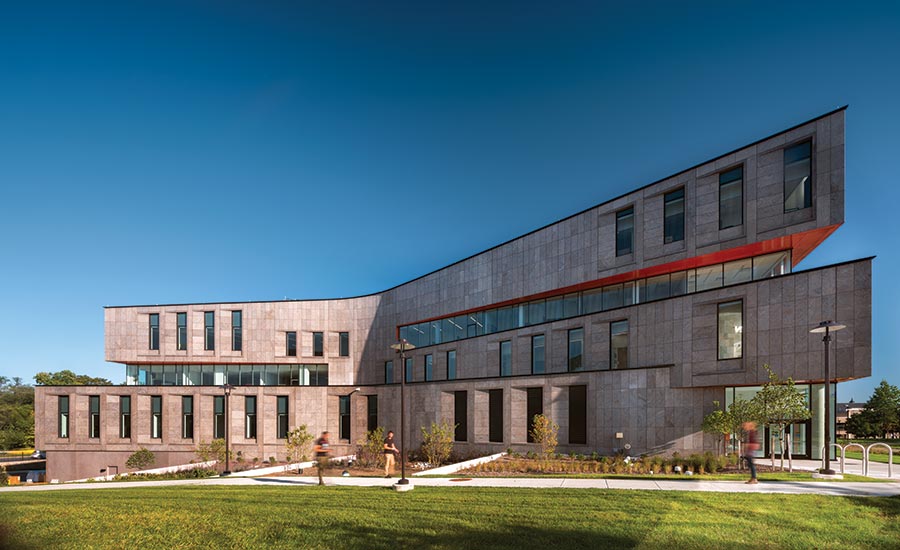 Calvin Tyler, for whom Tyler Hall is named, grew up in west Baltimore and was a student at Morgan in the 1960s. When he couldn’t afford to continue to pay for school, he dropped out and got a job as a driver for UPS. He rose through the corporation’s ranks, ultimately becoming senior vice president of operations. Last February, he gave Morgan $20 million, the largest-ever private donation to an HBCU from a former student. With his gift, which has endowed dozens of scholarships, he hopes to help students achieve what he could not. Now, with Tyler Hall, Morgan sends a similar message of hope and belonging. As Wilson says, “In marginalized communities, individuals should live in buildings at the highest level of design. We are not going to settle for second-rate architecture.”

A daylight drenched lobby, lounges, and breakout rooms offer a variety of areas for gathering and study. Photos © Nic Lehoux 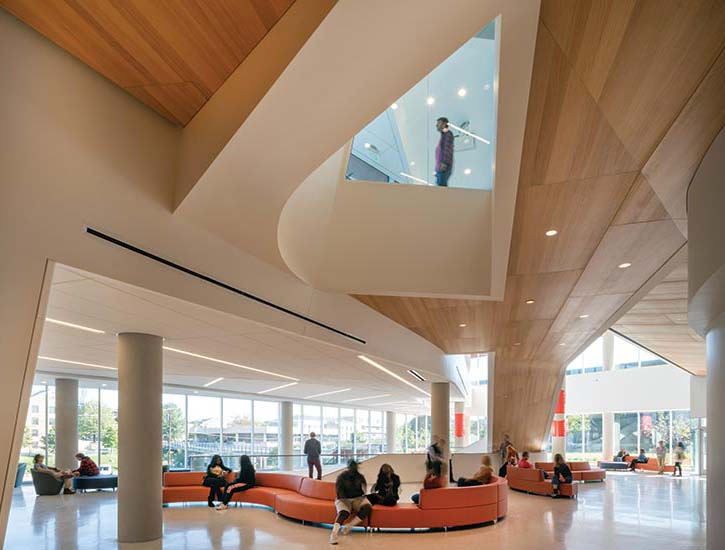 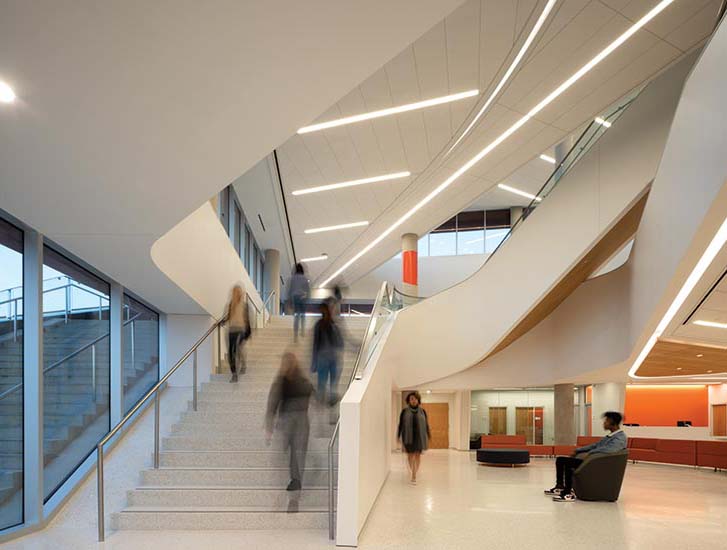 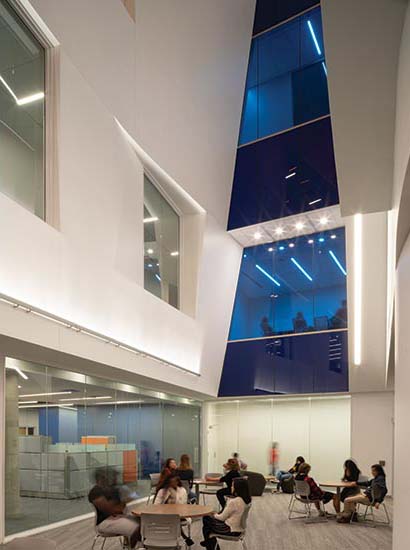 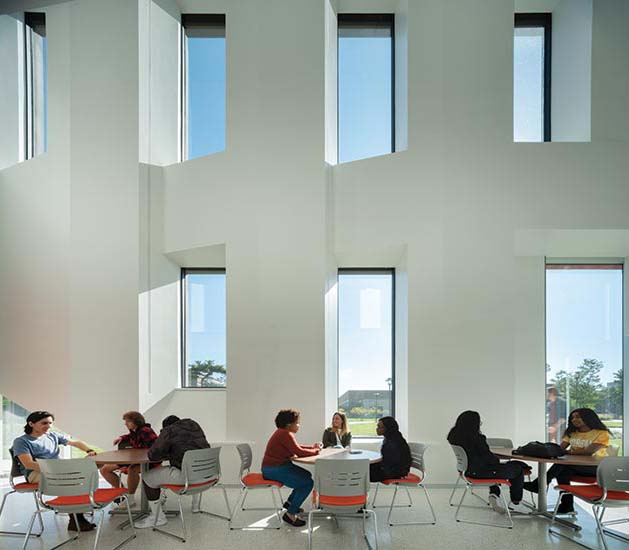 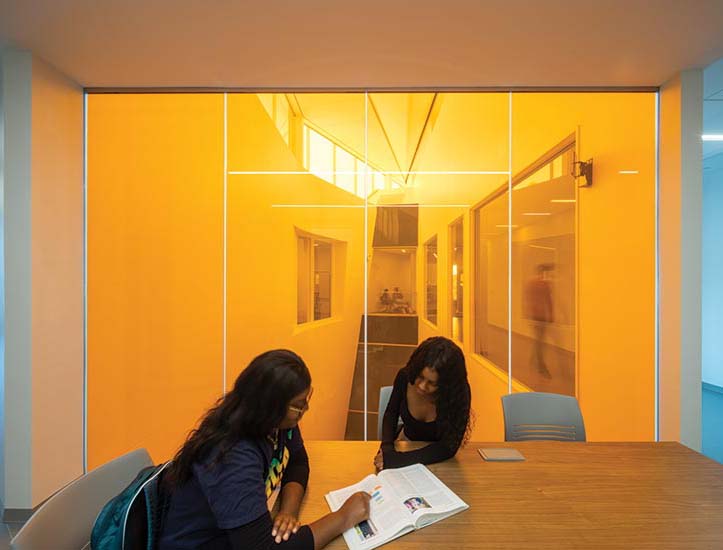 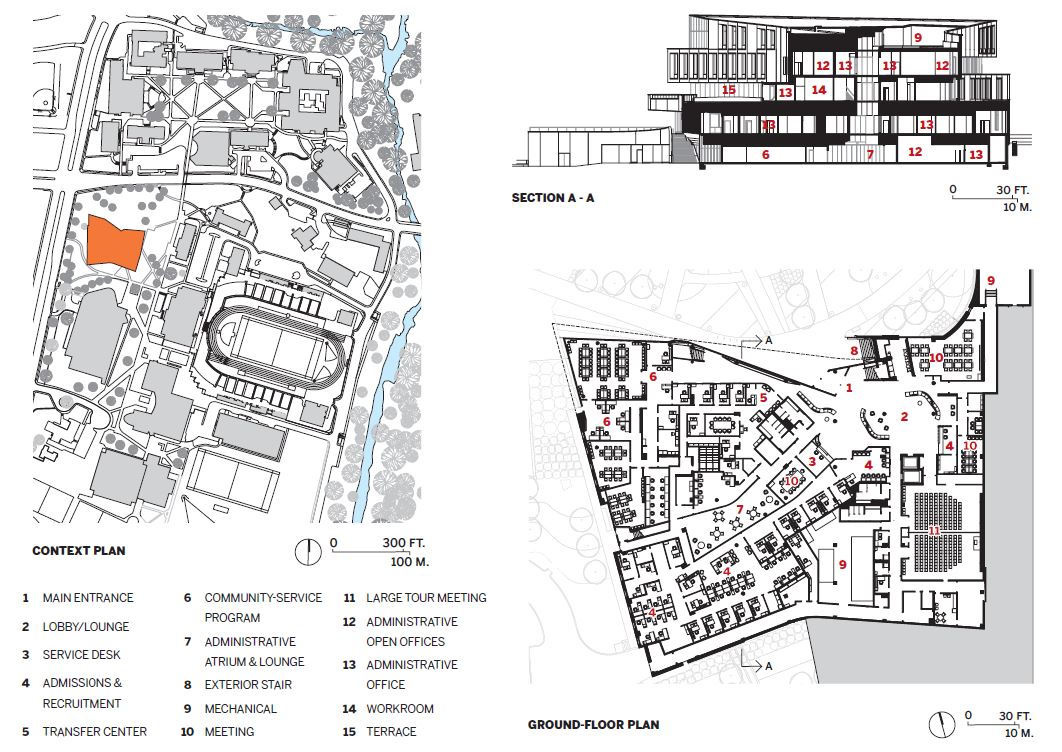