Johns Hopkins Loses a Gem by Williams and Tsien

The delicate glass-and-metal studios enclosed by the long, low brick walls of the Mattin Center at Johns Hopkins University in Baltimore are coming down. It is a significant loss because it is a deceptively modest but exceedingly rich building by Tod Williams and Billie Tsien—and it is just 20 years old.

The Mattin was a 50,000-square-foot center for visual arts, dance, and theater in three structures surrounding an intimate courtyard. It is a subtle building that may have seemed expendable because it almost disappears beyond a group of trees. Its cloistered, introverted personality contrasts with the university’s green quads of stolid Neo-Georgian structures. It revealed itself as one approached and descended into the courtyard via brick-railed ramps and stairs. While intricate layering of materials evoked the heft of older structures, the feel of the Mattin was more like a medieval Italian hill town. Within, daylight showered art studios and public spaces.

It will be replaced by a new, much larger student center, the kind of facility the university says it’s never had, designed by Bjarke Ingels Group (BIG). 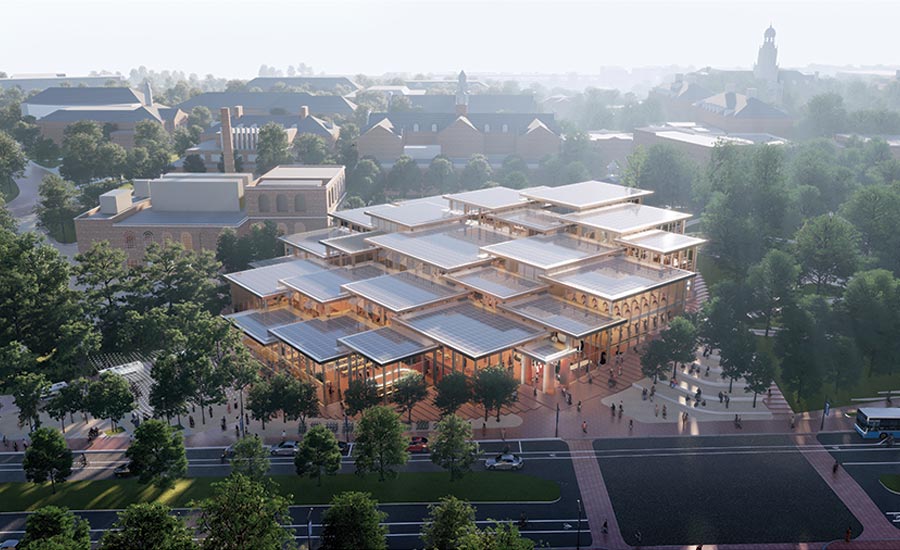 The Mattin Center at Johns Hopkins University, with its tiered composition of brick and glass (top), is being torn down and replaced by a student center by BIG (above). Image © BIG, click to enlarge.

Several key works by prominent modern architects have faced the wrecking ball on college campuses in recent years, or have been altered beyond recognition. Most are from the 1950s to 1970s and are often deemed—rightly or wrongly—to be obsolete. This can’t be said of the Mattin Center. “While studies were performed to test the integration of the Mattin Center within a broader student-center solution,” Lee Coyle, Johns Hopkins’s director of planning and architecture told RECORD in a statement, “existing building geometries and site complexities made this approach unworkable.” Williams says, “We’re still unhappy that Johns Hopkins did not come back to us with their needs. Not to save this building shows a lack of imagination.”

Belmont Freeman, an architect who has renovated well-known modern buildings, calls the Mattin “a gem,” adding, “It would have been a wonderful opportunity to come back to the previous architect to update and expand the project.” When asked to renovate galleries dating from the 1970s by Kevin Roche and John Dinkeloo Associates at Wesleyan University, Freeman consulted with Roche: “I had been told that he was prickly about earlier renovations by other architects, but I found him to be so gracious and helpful. He appreciated that I reached out. It’s also environmentally irresponsible to demolish a building that is a mere 20 years old,” adds Freeman, referring to the greenhouse-gas emissions embodied in new construction as well as to the wasted energy embodied in the Mattin. “Renovation is today’s sustainable practice.” 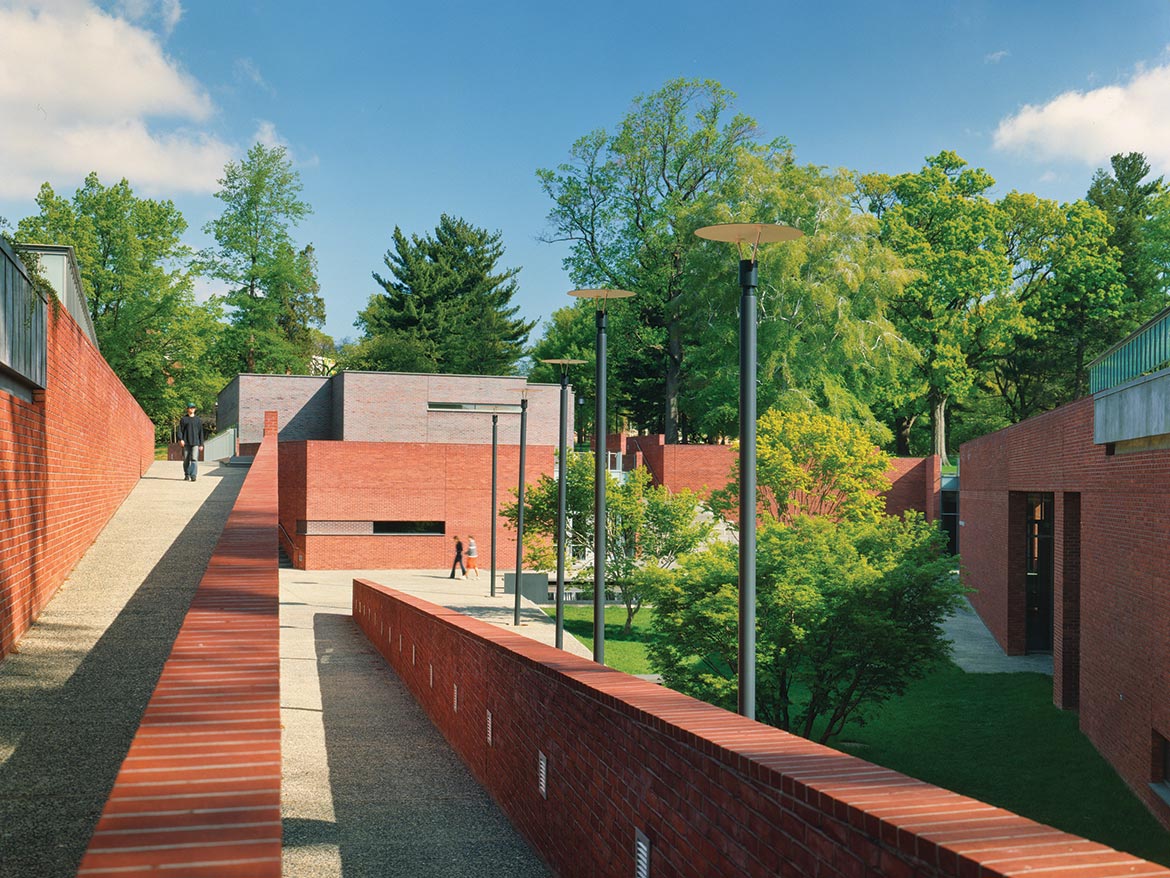 Brick walls enclose the courtyard of Mattin, which was completed in 2001 but deemed not suitable for renovation. Photo © Michael Moran / Otto

Johns Hopkins chose BIG for the student center in a design competition in late 2020. At 150,000 square feet, it will be three times the size of the Mattin. It clusters mass-timber-framed glass pavilions that step up the slope from Charles Street near the campus’s main entrance. Some replacements for the Mattin’s studios will be included in the new $250 million building, which pinwheels a wide range of student resources around a central “living room,” including a media center, a 200-seat performance space, and a food hall—all orchestrated to encourage mingling. (The interiors are by the Rockwell Group.)

In contrast to the Mattin, the design is intentionally extroverted, with activities spilling into outdoor plazas. “BIG’s scheme capitalizes on the building’s ability to be at once gateway, connecter, and destination,” Coyle explained in the statement. The student center is expected to open in fall 2024.

While it may seem that colleges and universities are demolishing many buildings of architectural merit, instances of razing structures as recent as the Mattin are rare. In 2007, the University of California, Irvine, bulldozed a diminutive 1986 computer-science and engineering building by Frank Gehry under circumstances almost identical to the Mattin’s.

This isn’t the first Williams and Tsien building to be razed. Their Folk Art Museum (2001) in Manhattan was purchased by the Museum of Modern Art next door—and then, famously, destroyed, despite widespread protest, as part of the museum’s 2019 expansion. Yet some also decried Williams and Tsien’s substantial alteration to the Hood Museum at Dartmouth College, by the exuberant Postmodernist Charles Moore, for their own addition.

Compromises to meet modern needs are often inevitable. “There are lots of studies and books on the preservation of Modernism, but you have to decide how far you take it on an individual basis,” says Freeman.

The university is also constructing, to expand its offerings, the SNF Agora Institute, by Renzo Piano Building Workshop, focused on civic engagement, to open 2023, as well as an addition to the Ralph S. O’Connor Center for Recreation and Well-being.

Johns Hopkins is faced with difficult decisions on yet another prominent building: it has acquired the abandoned 2008 Newseum, a failed paean to press freedom, in Washington, D.C., for $302.5 million. The university has decided to convert rather than demolish the structure as it consolidates its extensive programs in Washington, including the School of Advanced International Studies.

There, the school is altering significant exterior and interior features, including the grandly scaled atrium. Yet, in that case, Johns Hopkins turned to Ennead—the building’s original architect.