The Depot adjacent to the Boijmans Van Beuningen Museum in Rotterdam is the first of a kind: a publicly accessible museum storage facility. Opening on November 6, the Depot looks like a piece of super-scaled public sculpture: an amped-up version of Anish Kapoor’s Cloud Gate in Chicago’s Millennium Park, but it is in fact home to 150,000 art objects worth around $8 billion. Sjarel Ex, co-director of the Boijmans Van Beuningen museum and its Depot, refers to the new structure as “a bowl in a park,” as do the architects, MVRDV, celebrating not just its simplicity but also its strange novelty. 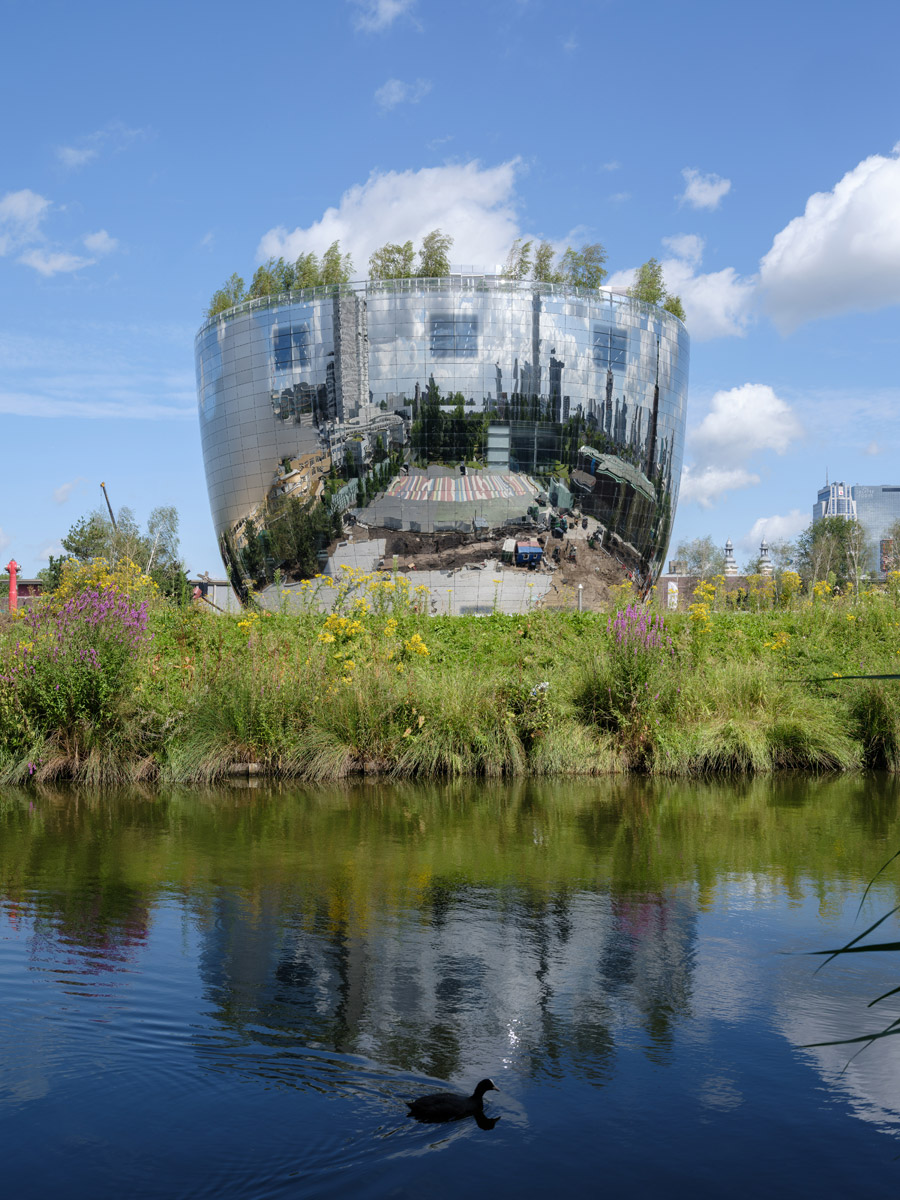 Similar buildings will be completed soon. The Victoria and Albert Museum will open the V&A East Storehouse in 2023, describing it as “a new immersive experience, taking visitors behind the scenes and providing unprecedented public access to V&A collections” on the former Olympic site in East London. Other European museums are looking to do likewise, seeking to open their collections to the public in new ways.

Why they are doing so is an interesting point with no clear answer. If a museum needs new storage, it could make financial sense to arrange for public access in order to increase revenue. However, this opening up of the collection also celebrates the importance of curating to contemporary culture. What is certain is that the Boijmans Van Beuningen Museum and Dutch architects MVRDV have gotten there first, grasping the opportunity to revel in the novelty of this building type. The Depot is a truly original structure with no real architectural precedents.

The parent museum, immediately adjacent to the east and currently closed for refurbishment, is a mid-19th century brick building, relatively modest in terms of decoration or scale, but complex in that it is organized around three courtyards. The Het Nieuwe Instituut to the north is a modern museum of architecture, design, and digital culture, which is a highly articulated structure that unfolds out into the vicinity of the Depot in Rotterdam’s Museumpark. The city’s largest hospital stands at the perimeter of the park just to the southwest. With a circular plan, the Depot presents its “back” to none of these buildings. 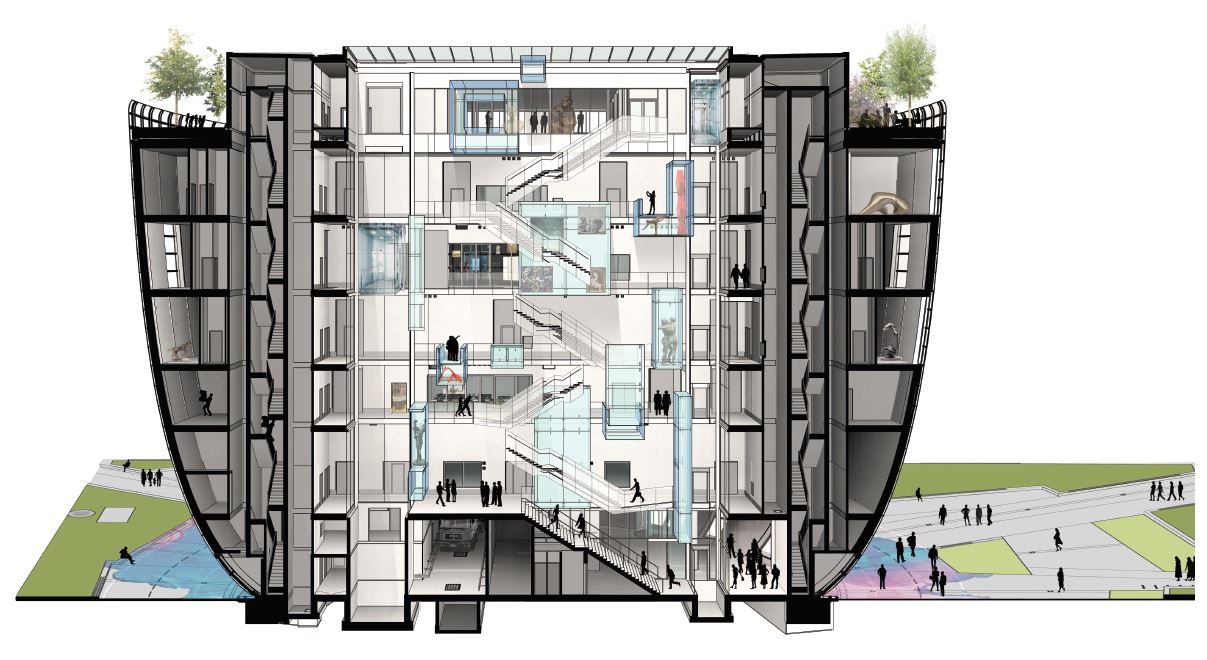 MVRDV has made this simplistic geometric solution into something of an aesthetic challenge. If contemporary Dutch architecture has been dominated by the approach of Rem Koolhaas’s OMA, where the program of a building is legible in the exterior form, MVRDV has attempted the opposite. The Markthal, or market hall, also in Rotterdam, which the practice completed in 2014, is a covered square nestled beneath what could very easily be mistaken for a large arch. The arch however is a block of 228 apartments. At the Depot, the firm has hidden the program of the building even more. With no windows at low level, and glazed entirely in reflective glass, although it is 6 stories or 130 feet in height, from the exterior it is a visual enigma.

It is able to be such through a double structural system. The building’s footprint is small—only 130 feet in diameter at its base but bulging out to nearly 200 feet. Sitting on top of the foundations is a three-story saucer of poured-in-place, reinforced concrete which cantilevers outwards in all directions. To counter this cantilever, two floors of reinforced concrete at levels two and three, which were cast as one piece with the outer bowl they sit within, pull the cantilever back in. The structure above the concrete base is light: a stacked series of circular concrete floor plates supported by 10 circular concrete columns rise until the sixth floor, which is steel, providing support to the pavilion on the roof. 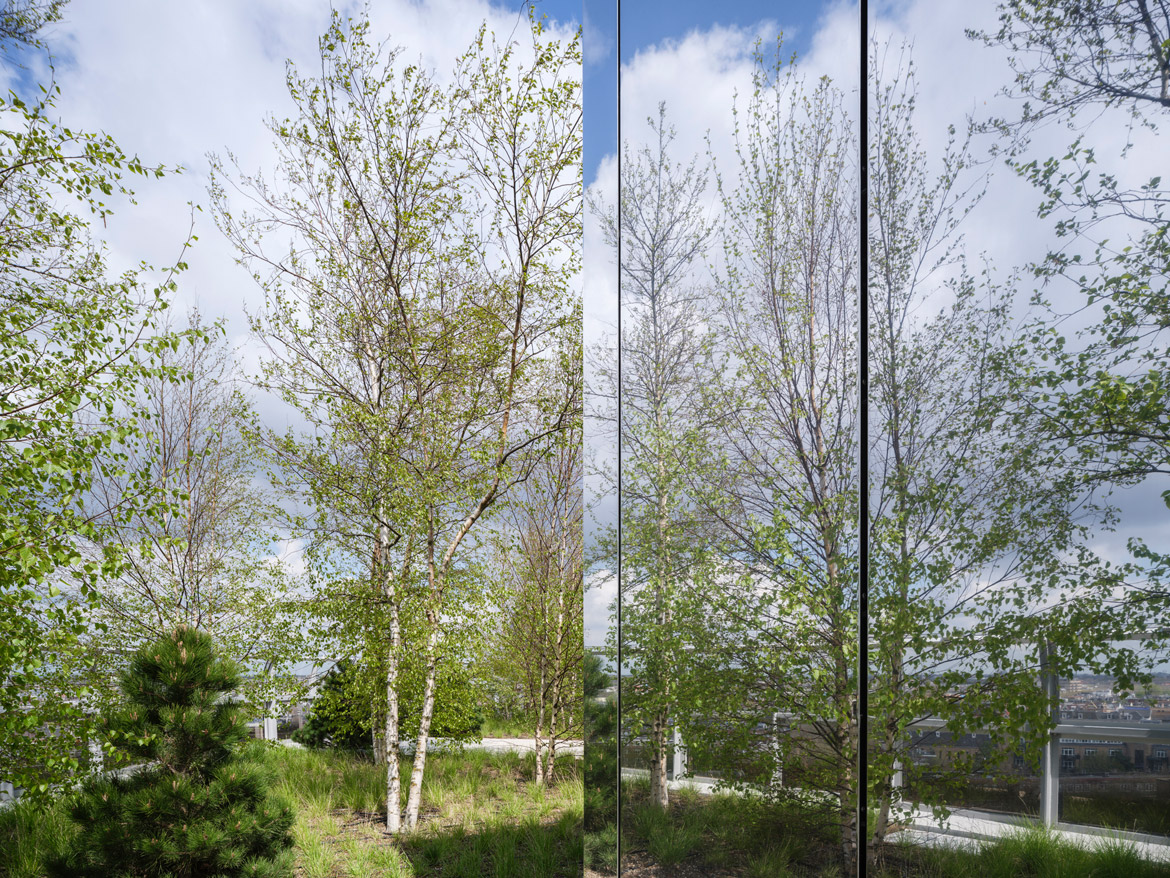 The roof, where a restaurant is located, is planted with trees. Photo © Ossip van Duivenbode

Above the poured-in-place section, the facade is made from prefabricated panels which tilt outwards slightly but are also load bearing. (The facade, the atrium walls, and the columns all work together to support the floors). On the exterior of the building, 71,000 square feet of glass divided into 1,664 panels is hung. The facade nominally helps the building blend into its surroundings, but it also creates a distancing effect. The curvature of the mirrored surface means that reflections change in a funhouse fashion as you approach the building. It is a distorted, exaggerated Rotterdam one sees reflected back. The panels themselves are each technical marvels: utterly bespoke to their position and bending in two directions.

The panes are painted with mirror coating and then formed to their desired shape in an oven, where gravity is used to allow the heated glass to settle into a tubular steel mold. Both layers from each laminated panel are formed simultaneously, with a film between the two that allows the glass panes to slide against each other as they bend. The panes are cooled as slowly as possible to reduce any deformations. Once the panes have cooled, they are laminated with a central polyvinyl butyral (PVB) layer, before being shipped to the Netherlands from Shenzhen, China. Cumulatively their effect is dazzling.

Within is 160,000 square feet of floor space: home to over 100,000 objects of Western art dating from the Middle Ages to the present day. Pieter Bruegel the Elder’s oil painting of the Tower of Babel is one of theirs as are Peter Paul Rubens epic tapestries of the life of Achilles. They also own key works by everyone from Hieronymus Bosch to Willem de Kooning. There’s little sign of these in the main entrance on the ground floor however, which is a relatively tight space. Apart from the staircase and elevator shaft, a ceiling withholds the drama of the atrium above: very much the key space of the building which runs from the second to the fifth floors. It is a complete surprise in a building dedicated to storage, even the storage of art. 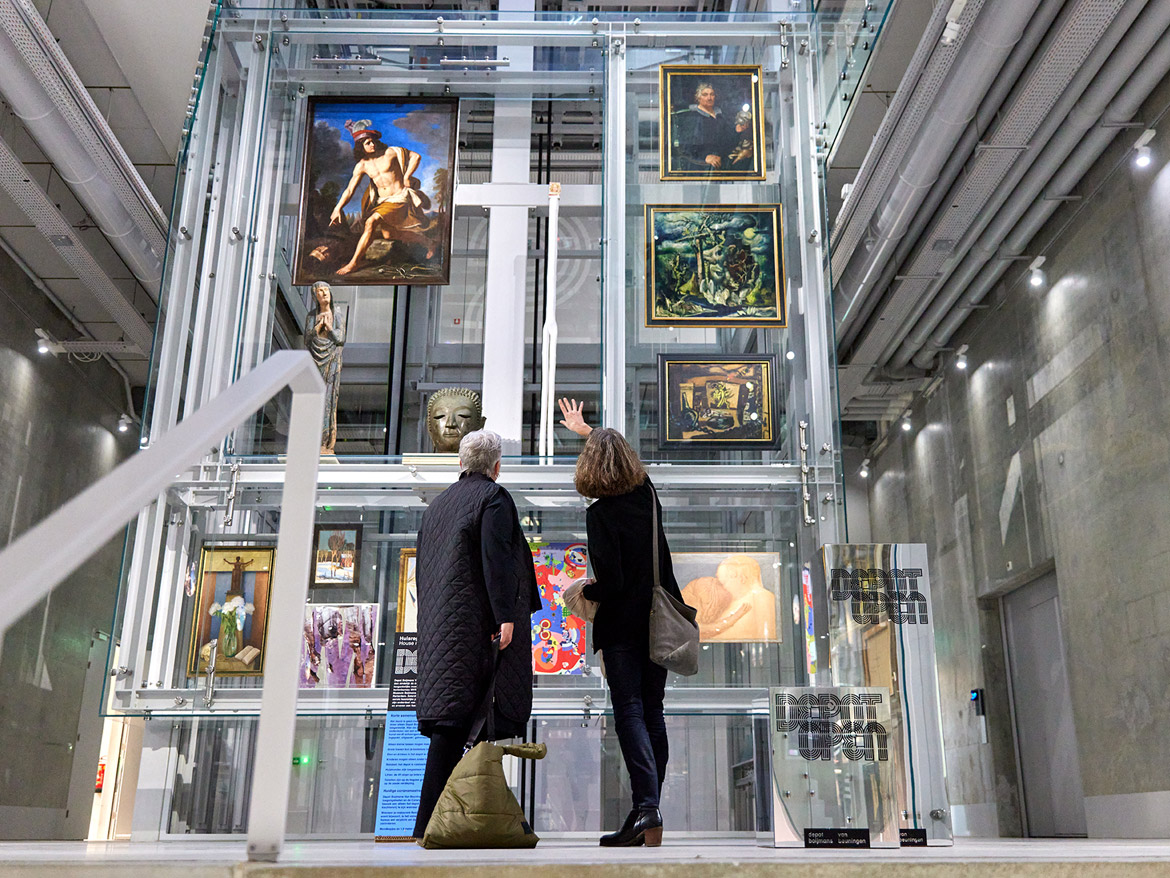 At the northern public entrance stand two separate passenger elevators; one an express elevator straight to the roof, so the restaurant and a public roof garden can be accessed when the Depot is closed. At the opposite end is a huge freight elevator. The atrium is defined by these elevators and their steel support structures. The central space though is dominated by five steep, criss-crossing staircases, creating a dynamic space in which movement, or the suggestion of it, is constant. Around the staircases are 13 vitrines which exhibit examples of the collection. It’s not a space designed to make the collections legible or to ease their access, it is a space which dramatizes the act of curating: making links between objects, looking at them in new ways, and displaying them in novel settings.

The storage rooms off the atrium are by necessity more subdued. Paintings are arrayed on centripetally arranged retractable racks. Sculpture is stacked on shelves. These repositories are interspersed throughout the building by three exhibition spaces, a suite of rooms for specialized conservation work and, given the collection contains film, a cinema. On top of the Depot stands a cruciform pavilion containing a restaurant and function rooms. The cross shape was chosen so that at any one time a corner can be found which will provide shelter from Rotterdam’s notoriously persistent winds. 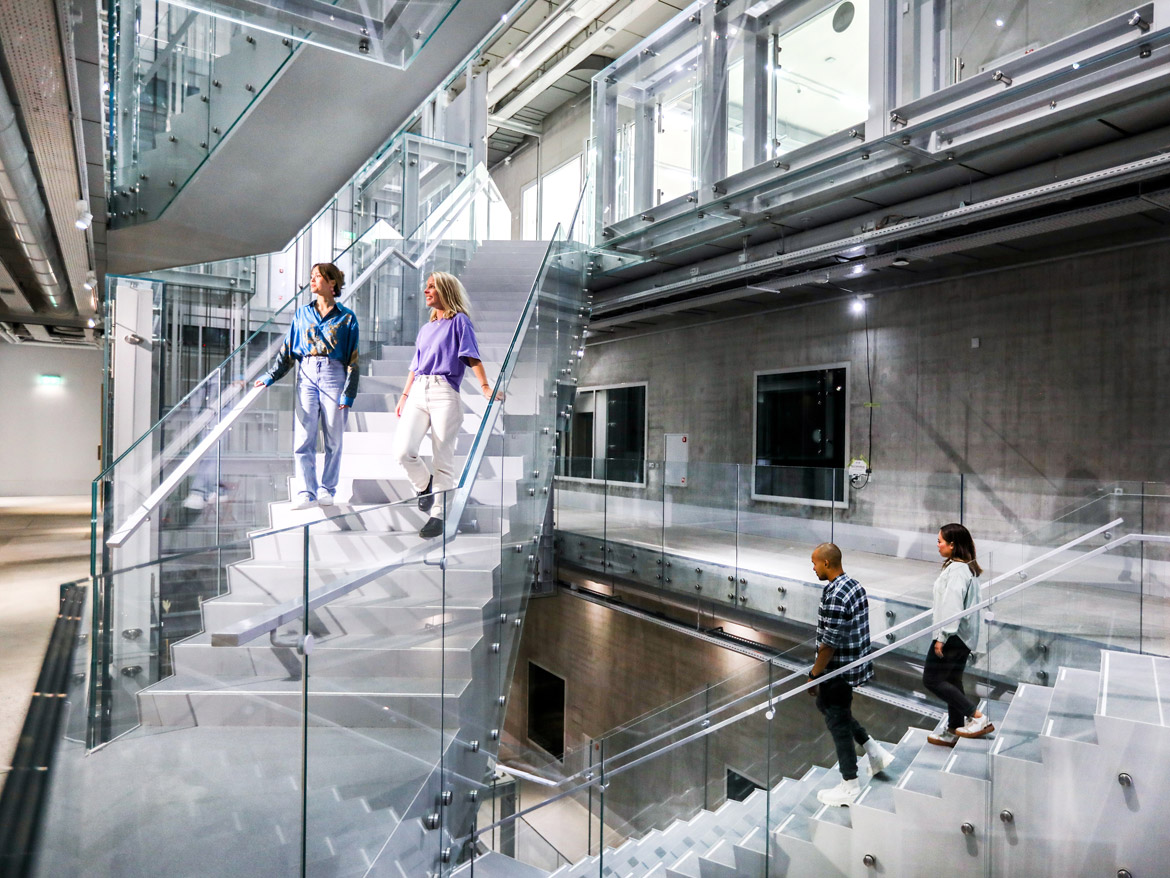 With institutions moving towards more open access to collections, some have argued that museums are doing little other than returning to their 18th-century origins by showing off the totality of their collection. The wunderkammer, or chest of delights, a small cupboard or wardrobe popular in the 18th century, is cited as a precedent for the new depot typology. This totally fails to grasp the scale and drama of what MVRDV has achieved with the Depot Boijmans Van Beuningen: a building in which our journey into making sense of the material riches of the past is celebrated to an almost giddy height.

Back to Cultural Buildings 2021
KEYWORDS: Netherlands