Approached along a winding gravel path and nestled in a scenic valley just 200 yards from the Great Wall of China, the Chapel of Sound, by Li Hu and Huang Wenjing, of the Beijing-based OPEN Architecture, looks like a giant boulder. Located 2½ hours northeast of the capital, next to a sprawl of luxury homes and resort apartments, the 8,500-square-foot open-air concert hall was commissioned by Aranya, the property developer that built the mountain resort. Aranya had previously worked with the architects on the UCCA Dune Art Museum, which opened in 2018 on the country’s northeast coast. 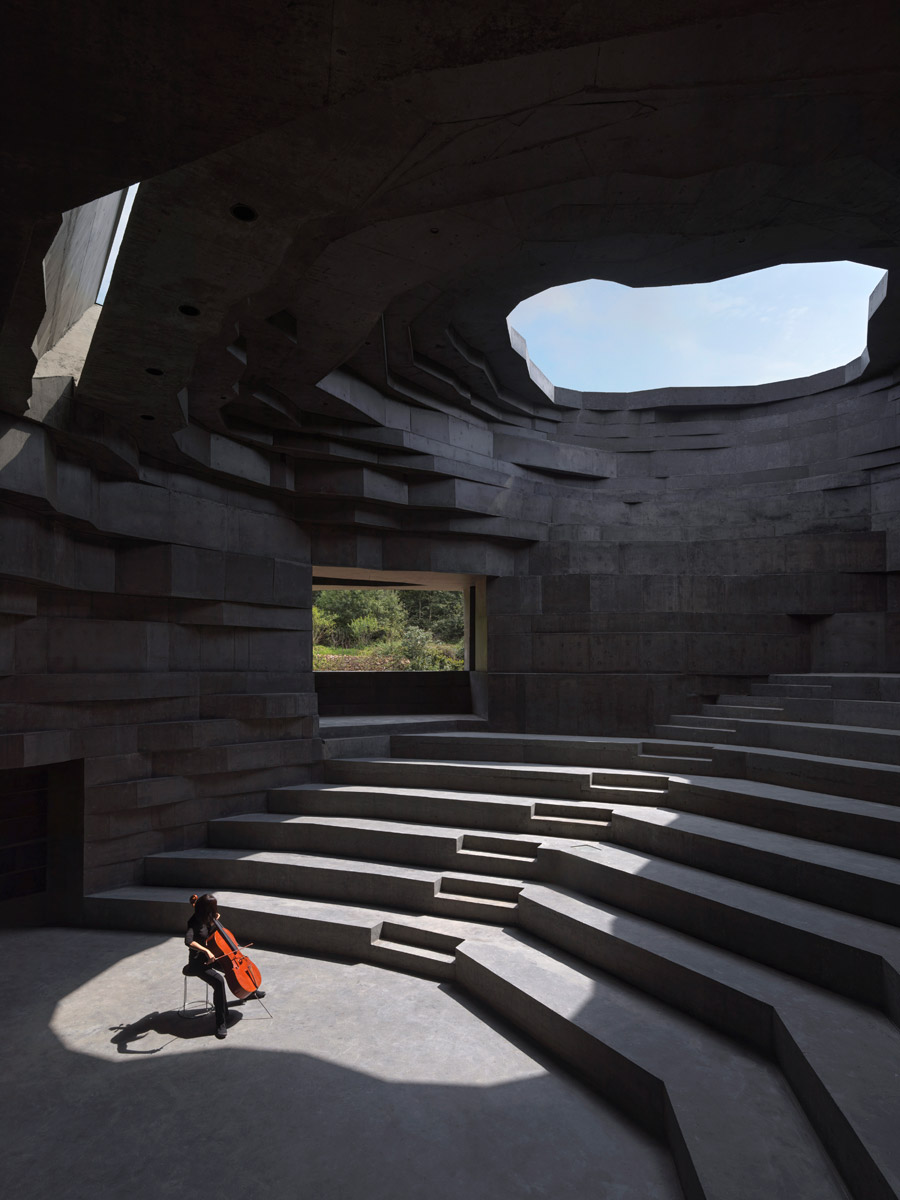 The roof aperture brings a dramatic shaft of light into the auditorium. Photo © Jonathan Leijonhufvud 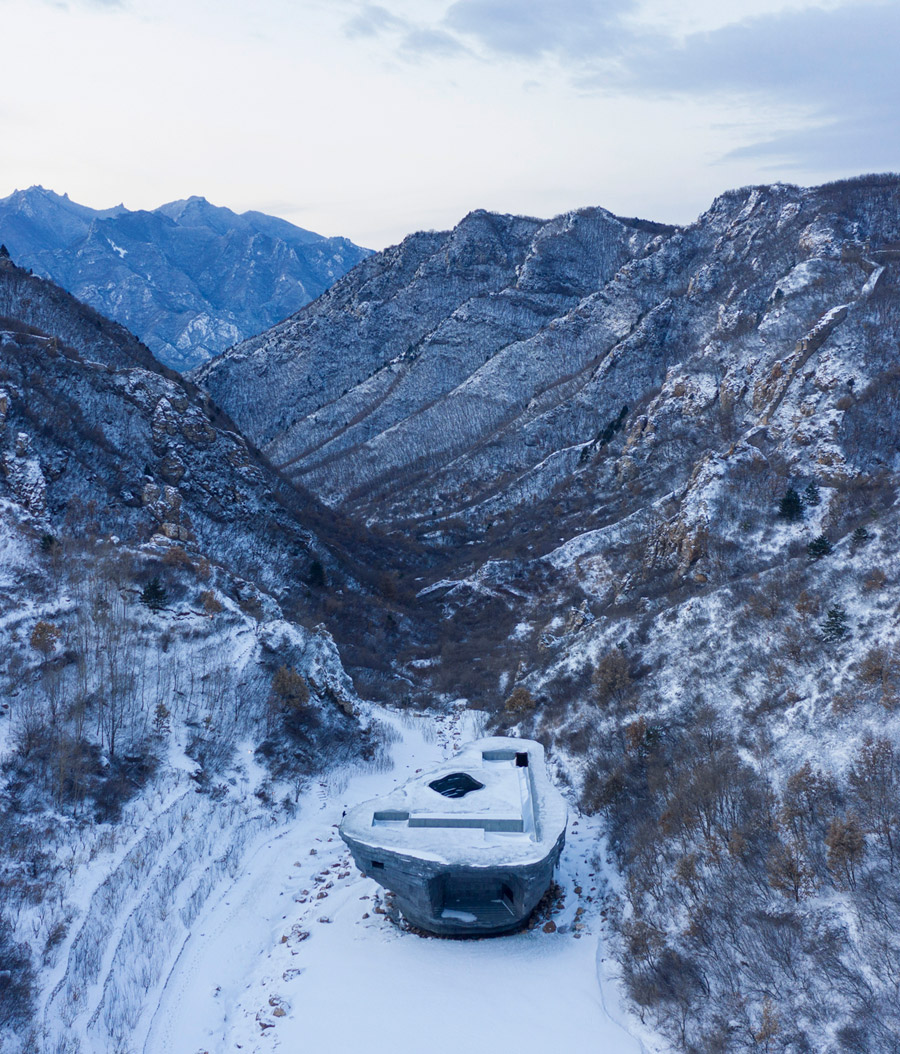 The Chapel of Sound has no climate control so is not officially open during the winter. Photo © Kang Yu

With its inauguration scheduled for spring 2022, the concert hall, which has no heating or air-conditioning, will be open officially only during warmer months. However, the architects believe that cultural buildings shouldn’t be reserved just for the privileged and hope that people will wander around and through the Chapel of Sound even when there is no performance. By designing a structure with large openings, multifunctional communal spaces, and very few doors, Li and Huang tried to reinterpret not only concert halls, but the idea of theater itself.

From the start of the project, the architects wanted to create a space shaped by sound, for sound. “We drew inspiration from all kinds of sound instruments,” says Li, “be they natural like the human inner ear, or man-made, such as a violin or cello.” 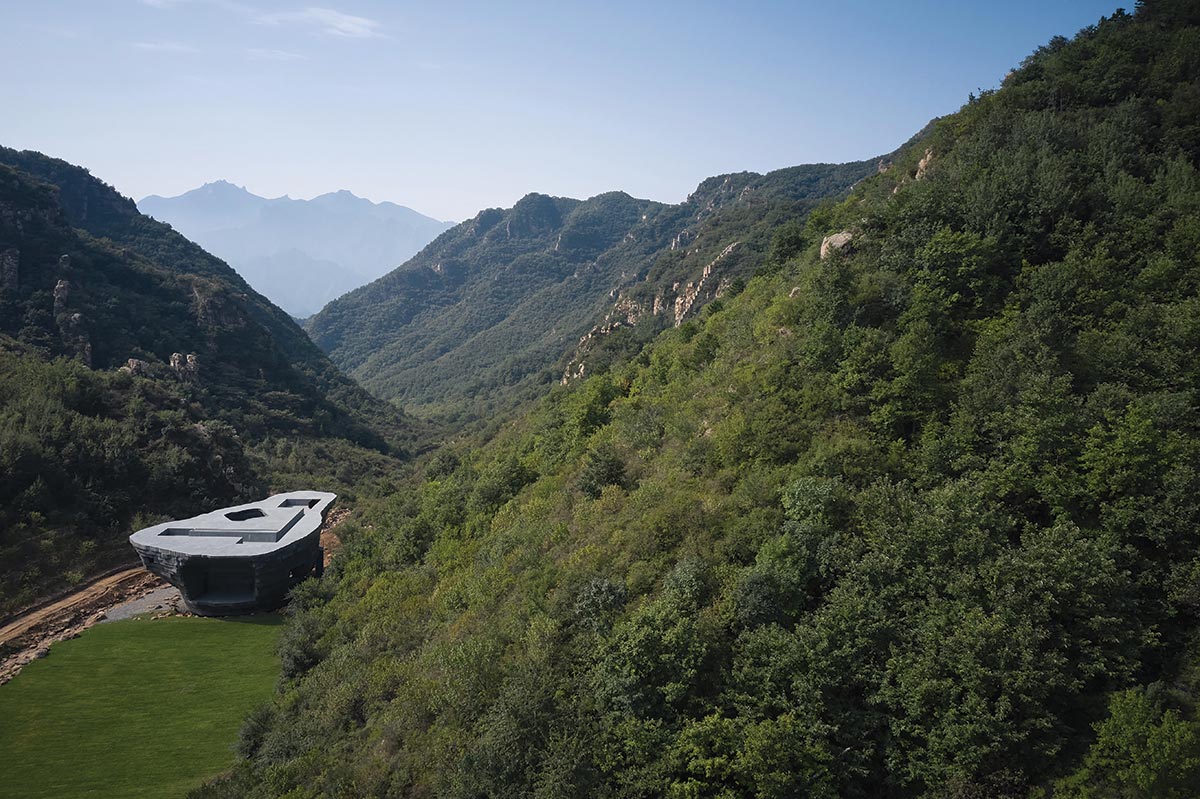 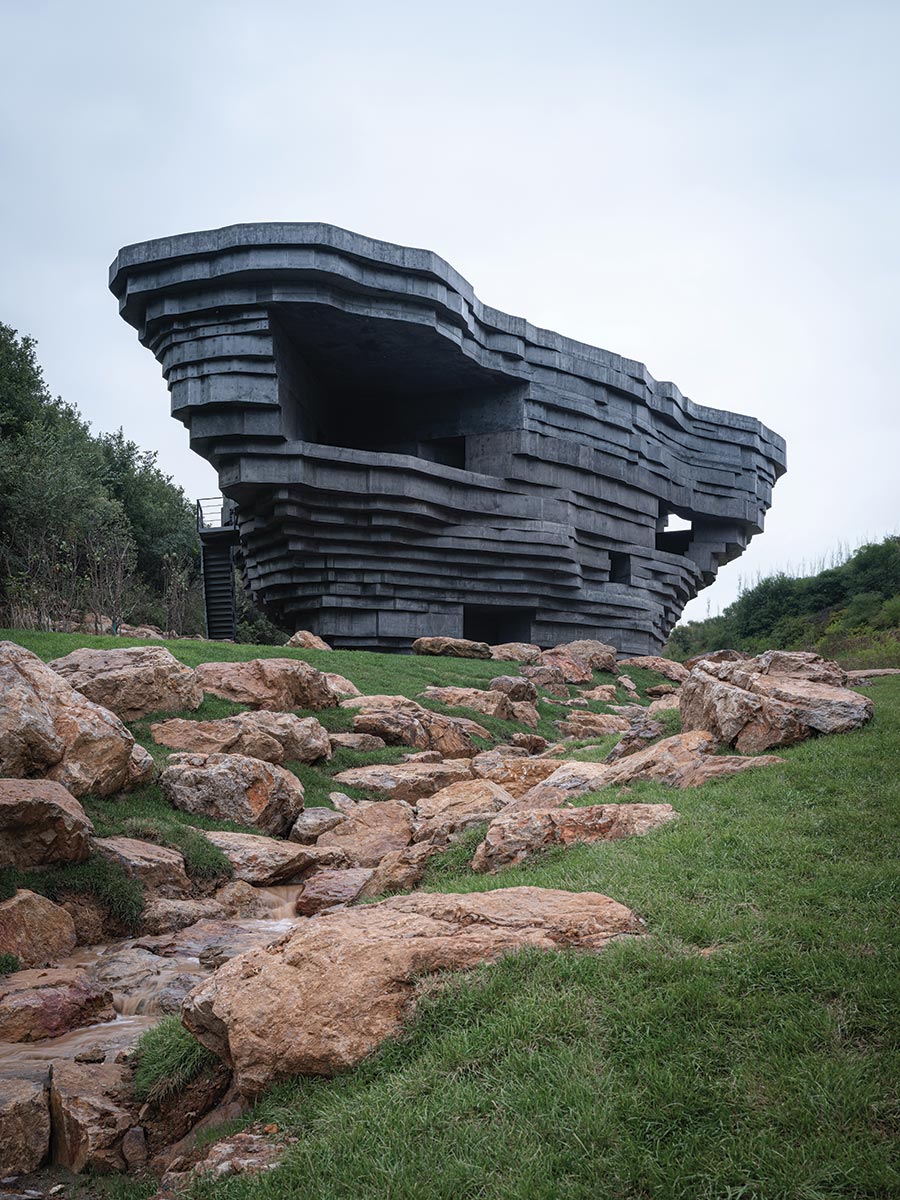 Lacking precise drawings of the valley, the architects built a plaster model of the whole site by hand. They initially wanted to place the building as close as possible to the Great Wall, but settled on a more level spot in the valley, because it was easier to build there and wouldn’t be as prominent. They positioned the structure to capture the dynamic sweep of the land and orient visitors to the spectacular views. As you walk toward it, the building appears to change from a solid boulder to something more open and hollow. Its inverted conical form, which recalls the shape of an inner ear, responds to the spatial needs of an auditorium and echoes the compressive forces of its canyon setting.

Taking a cue from the area’s sedimentary rock, Li and Huang designed the building’s envelope as cantilevering, stacked layers of poured-in-place concrete. “We didn’t want to simply imitate a rock,” say the architects. “We wanted something that blends in with the environment and yet is undeniably assertive and human. Concrete was a natural choice for its resilience in harsh outdoor conditions.” But typical concrete, they believed, would look “too bright,” so they used an aggregate of crushed local rock to further connect the chapel to the site. 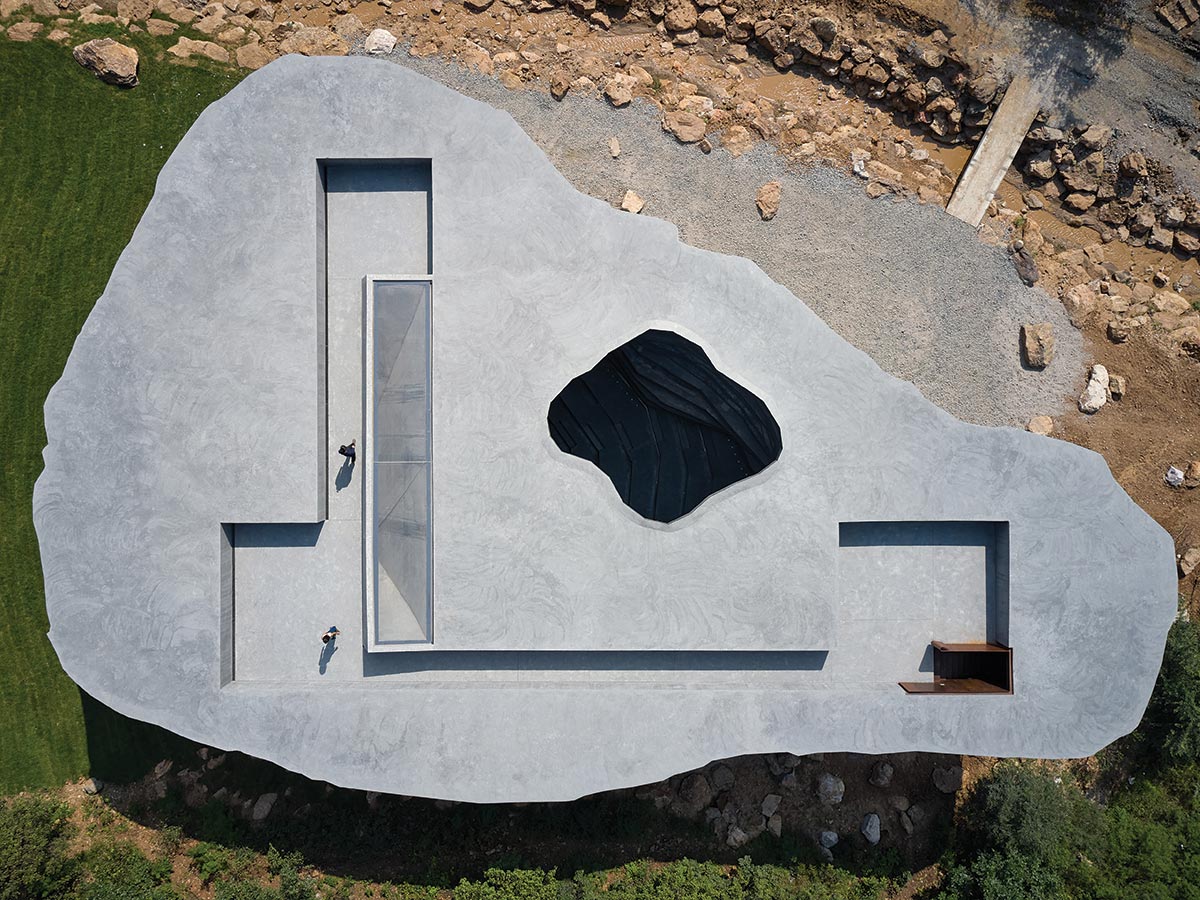 The Chapel of Sound encompasses a semi-enclosed auditorium, an outdoor stage, and two viewing terraces on the upper two levels; while the auditorium turns inward, the terraces orient visitors to the setting, one looking south to the valley and the smaller one looking east to the mountains. Service areas—a dressing room, green room, and restrooms—are on the ground floor. Working with engineers at Arup, “we cut out all the structurally unnecessary concrete,” says Li, and devised a double-shell structure with space in between that operates as a truss. Visitors ascend a winding stair in the dimly lit, crevice-like gap between the inner and outer walls to reach the cavelike performance hall, the outdoor stage, and the viewing terraces. 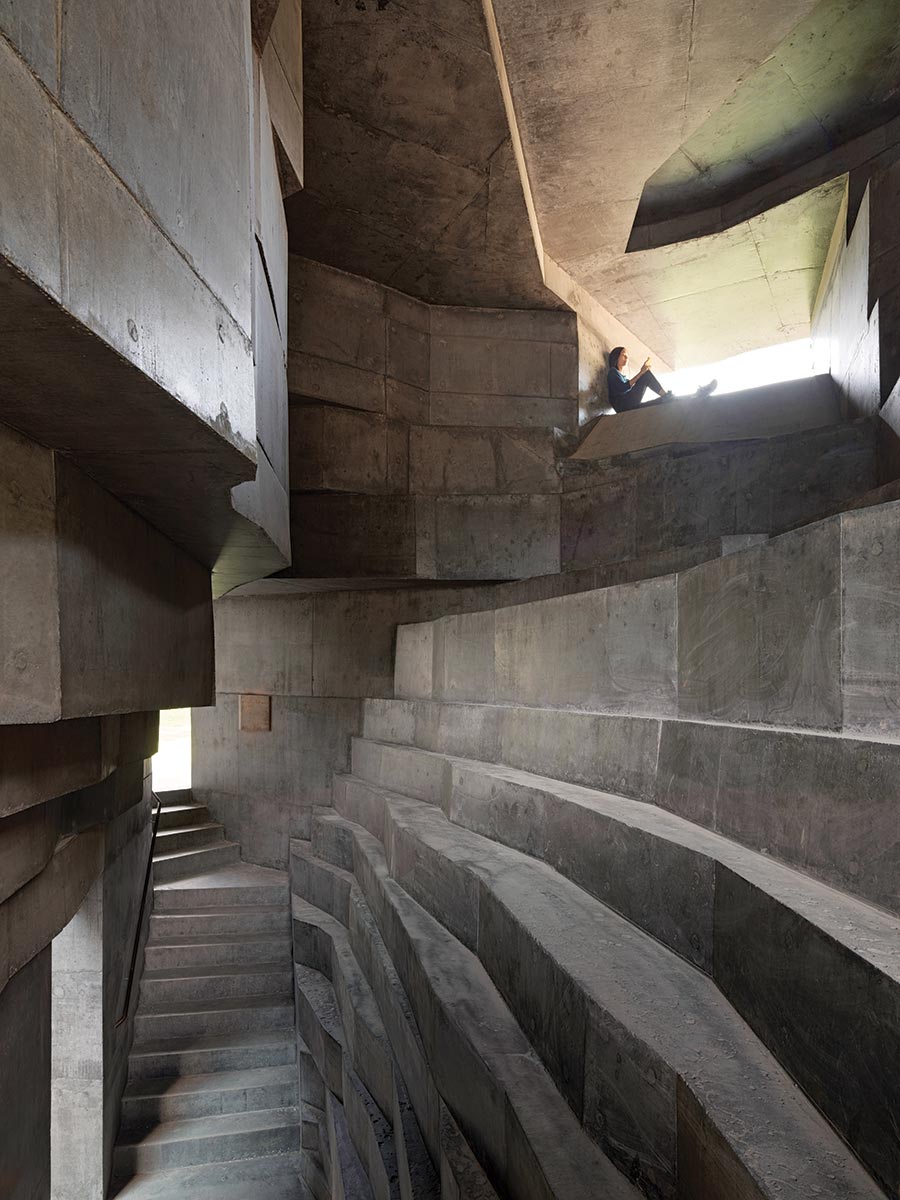 While the architects at first had imagined a roofless amphitheater, they eventually settled on a flat roof with a large, cloud-shaped opening that brings a dramatic shaft of light into the auditorium. “An open-air concert hall is about drainage rather than being waterproof,” says Li. “So we learned from the Romans and implemented a drainage system in the floor.” When it rains, two-thirds of the 150 inside seats are protected by the roof.

Various openings in the thick concrete walls blur the boundary between indoors and out, contributing to a sense of being in nature, and softening the hall’s acoustics. The interior walls and ceiling of the performance space, designed with a multitude of surfaces, allow sound to reflect off and reverberate within them. The hall is proportioned so that it works for an audience of many or just one—if a visitor arrives alone to enjoy the sounds of nature when no music is being played. Similar consideration went into the design of the outdoor stage, with its slanted walls that reflect sound onto a lawn that can seat up to 5,000 people. 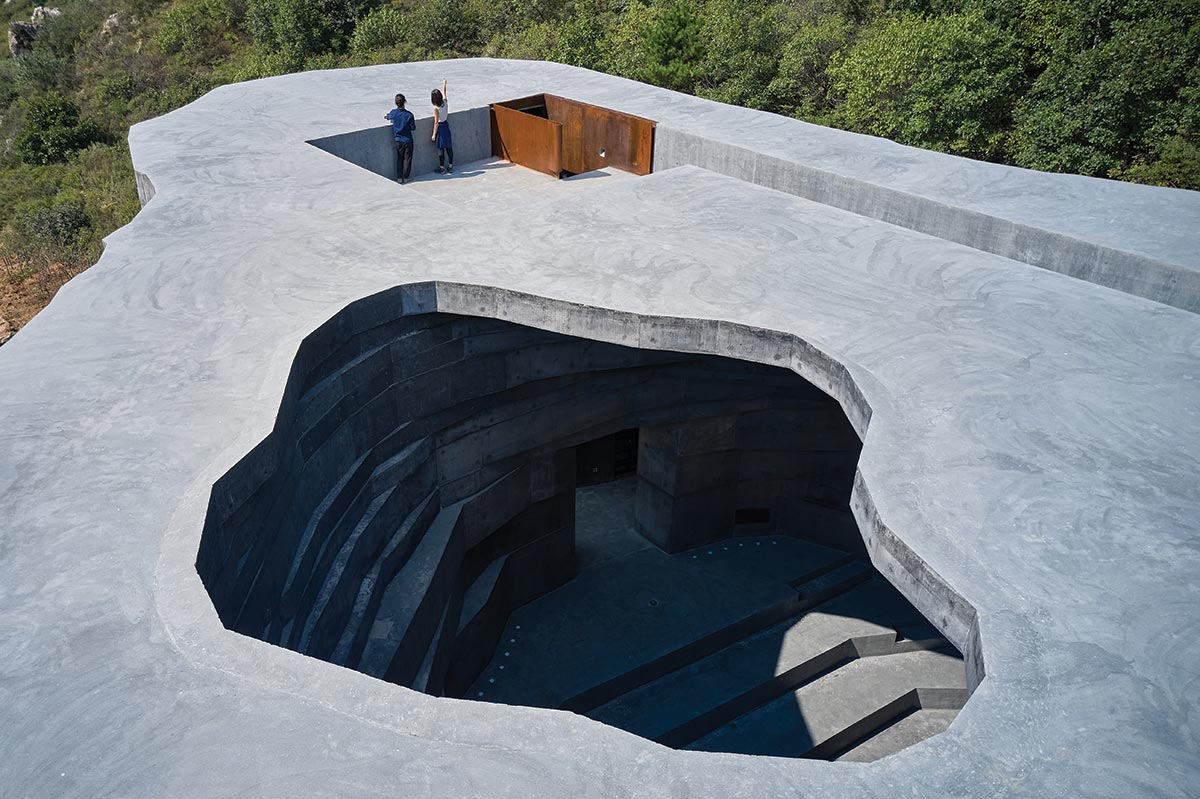 The roof’s opening (3) creates a cloud-shaped frame for the sky (4). Photos © Jonathan Leijonhufvud (1) 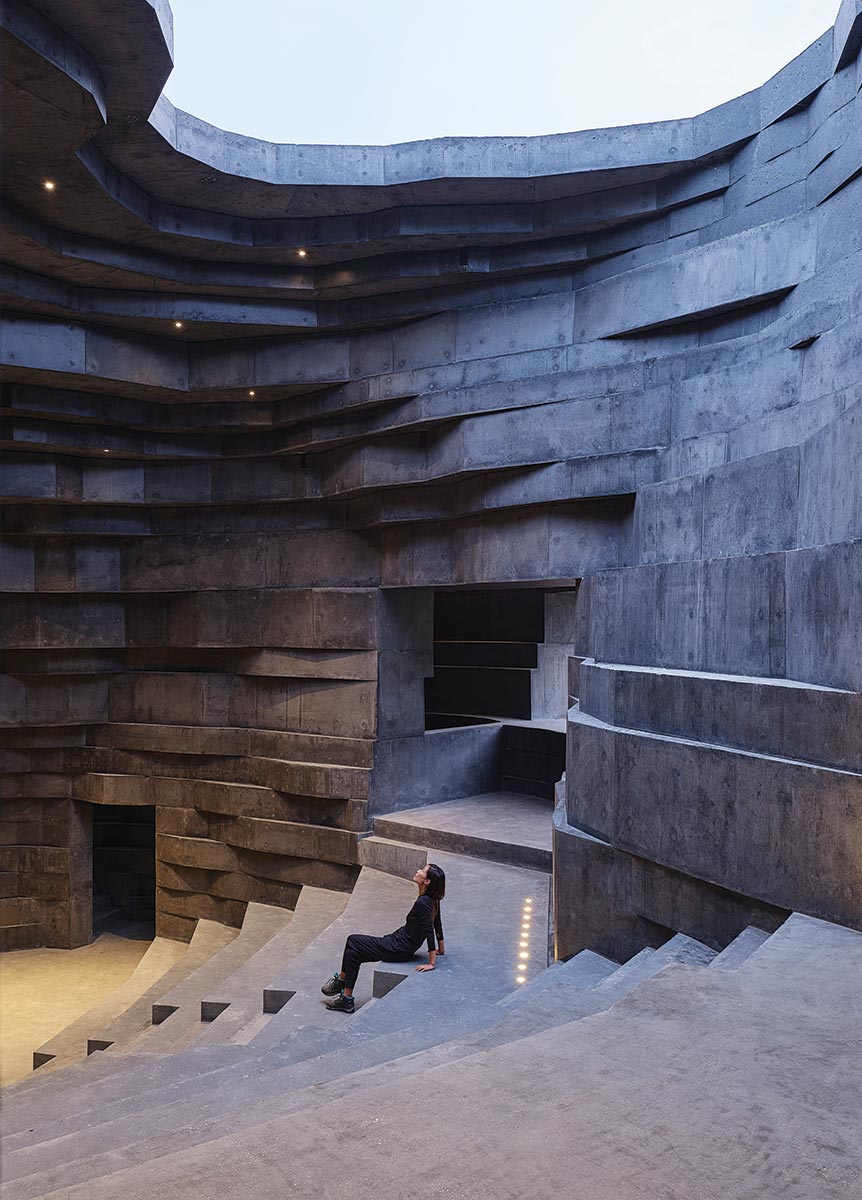 In contrast to the organic form of the auditorium, a walkway on the roof is all straight lines and right angles—a place where a more rationalist order asserts itself. The entire structure is a place of tension and contrasts: visitors move from light to shade and from constricted spaces to open ones. Such tension is expressed, too, in the contrast between the roughness of concrete and the delicacy of bronze signage and handrails.

The Chapel of Sound’s self-supporting inverted concrete cone sits on a modest raft foundation that required just a small amount of excavation. Its roof has extra steel reinforcement working in tension and holds the entire structure together—creating a monolithic sculpture that is not unlike a rock or a mountain, says Li. Explaining the firm’s approach to the project, Li says, “This does not have the architectural logic of pillars and beams. This is the way of nature.” 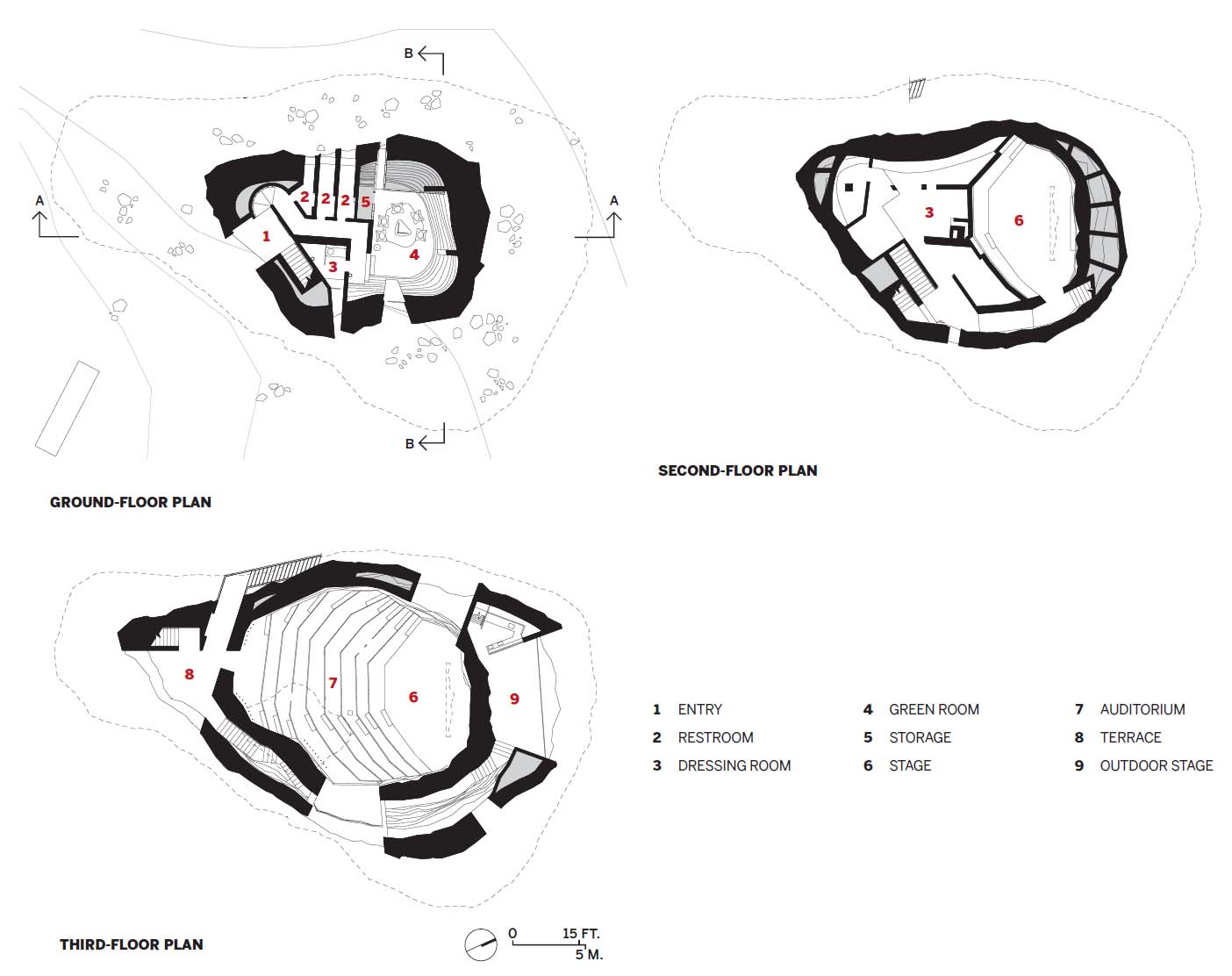 Gabriel Yao is a Beijing-based freelance writer, translator, and curator.