This website requires certain cookies to work and uses other cookies to help you have the best experience. By visiting this website, certain cookies have already been set, which you may delete and block. By closing this message or continuing to use our site, you agree to the use of cookies. Visit our updated privacy and cookie policy to learn more.
Home » Pivadenco Rural School by MAPAA Architecture Studio + Duque Motta
ProjectsBuildings by TypeCivic ArchitectureK-12 School Design

Since the 1900s, the Araucanía region of Chile has been the site of intensifying conflict between indigenous Mapuche communities and the government, which has permitted large forestry contractors and others to take over historical lands. Amid this ongoing dispute—which goes back to the late 19th century—the region has become one of the poorest in Chile. In an attempt to preserve and foster the language and culture of the indigenous people there, in 2016, the country’s Ministry of Education launched an architectural competition to bring schools to these remote areas, about 400 miles south of Santiago. 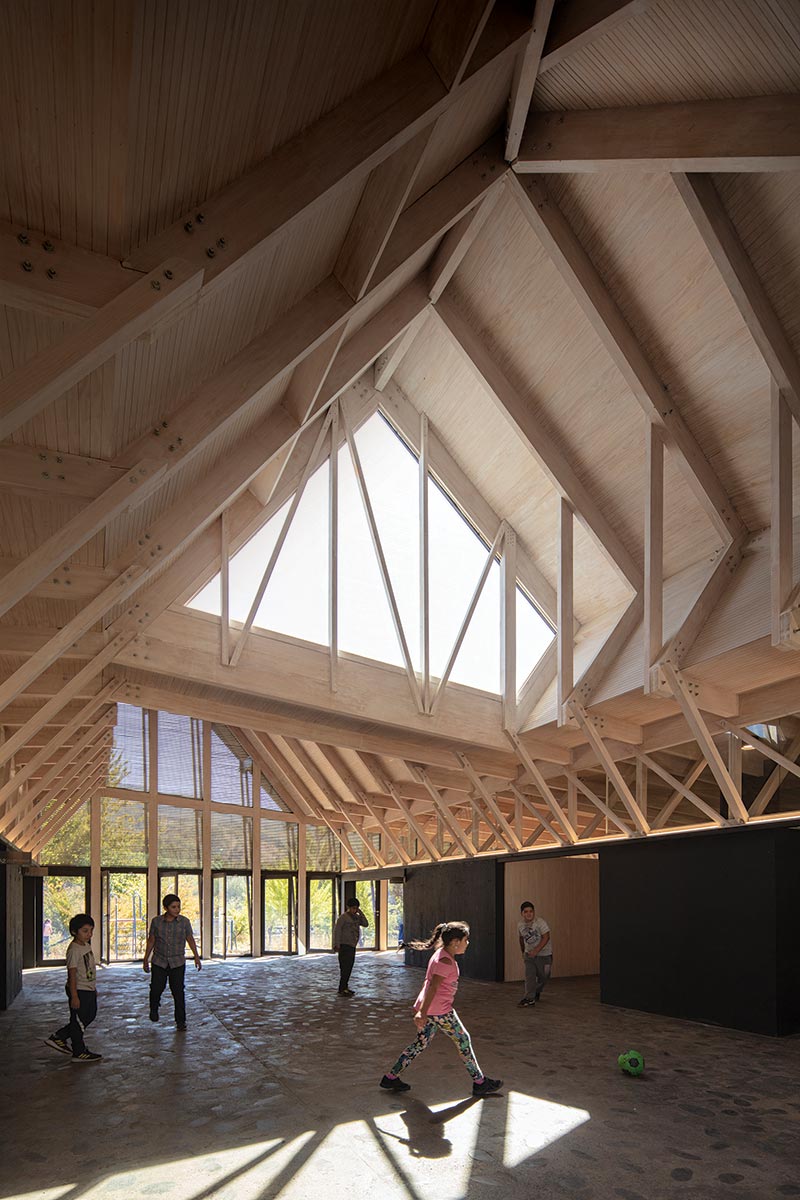 “In these scattered rural territories, the school is the center of community life,” says Cristián Larraín, partner and director of MAPAA Architecture Studio, which in collaboration with architecture firm Duque Motta was awarded the task of developing four of eight schools commissioned through the Rural Schools of Araucanía initiative. “We sought to define a common strategy for the four schools, based on understanding the building not only as an educational center, but also as the social center of a territory,” says Larraín, who founded MAPAA Architecture Studio with Matías Madsen in 2007, and has since completed office and residential projects across Chile.

Though linked in their goals, each school has its own design, responding to specific topographic conditions, solar orientation, and program requirements. The Pivadenco Rural School, in the Los Sauces district, recalls the local timber agricultural sheds, composed of wood assemblies with short members capable of creating large structural spans. “We worked with a prefabricated pine system, which allowed pre-dimensioning of all the structural parts that make up the building,” says Larraín. On the ceiling, a tongue-and-groove pine fascia meant the architects could generate a continuous surface while adapting to the geometry of the roof. Exposed concrete stained black acts as a heat sink by capturing and storing solar energy from skylights and releasing it as the climate cools. Floors are polished concrete in high-traffic common areas and native coigue wood inside the classrooms, for a warmer material palette. 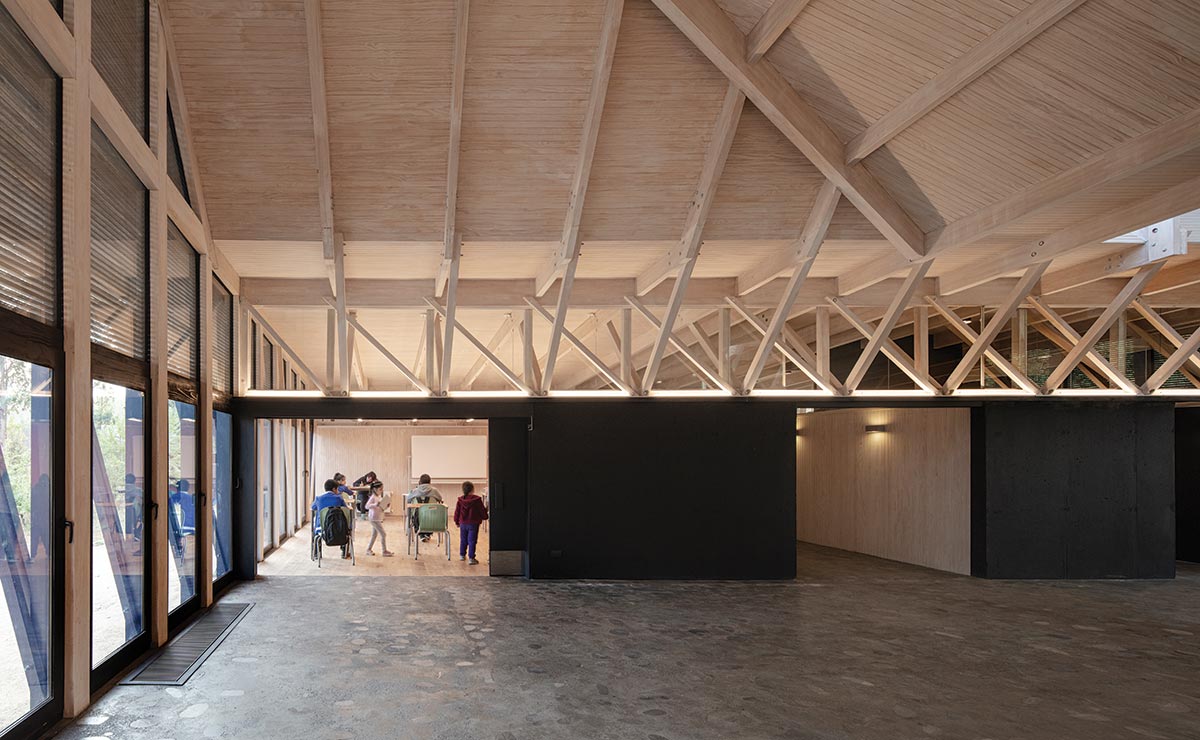 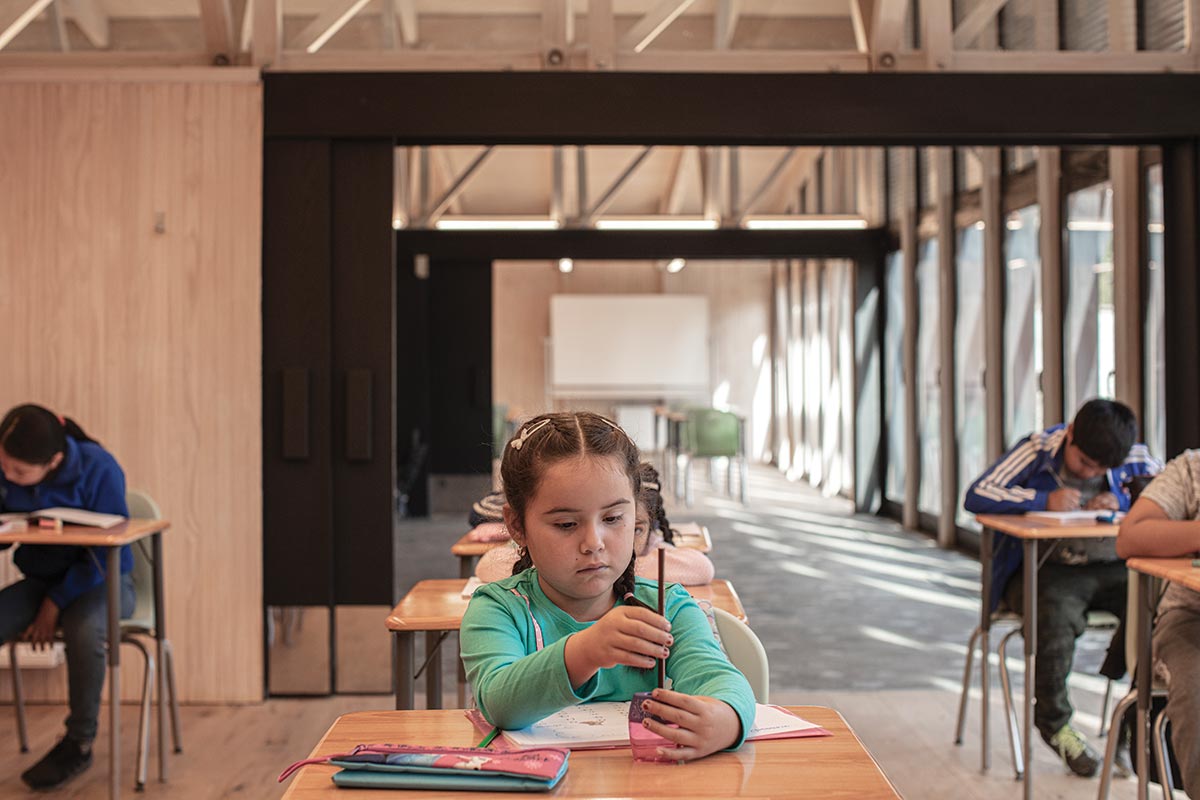 To promote the idea of a community center, the architects created a space capable of adapting to a variety of educational and social activities within the school. It was a design strategy that evolved from meetings with the local population, where the architects presented the main goals of the building and in turn received community input. The school relies on a single teacher to guide students between 7 and 14 years old in the same classroom; to allow children of different ages to coexist in a single space, a 1,185-square-foot multipurpose internal patio is flanked by two 440-square-foot classrooms that can be used individually or in tandem with the central space, as sliding doors are opened or closed. A kitchen and pantries, restrooms, and circulation corridors all link with the patio. The effect is a direct and supportive connection with the surrounding community, whether for a jovial afternoon of sports or for important meetings with neighbors about the future of the rural territory. 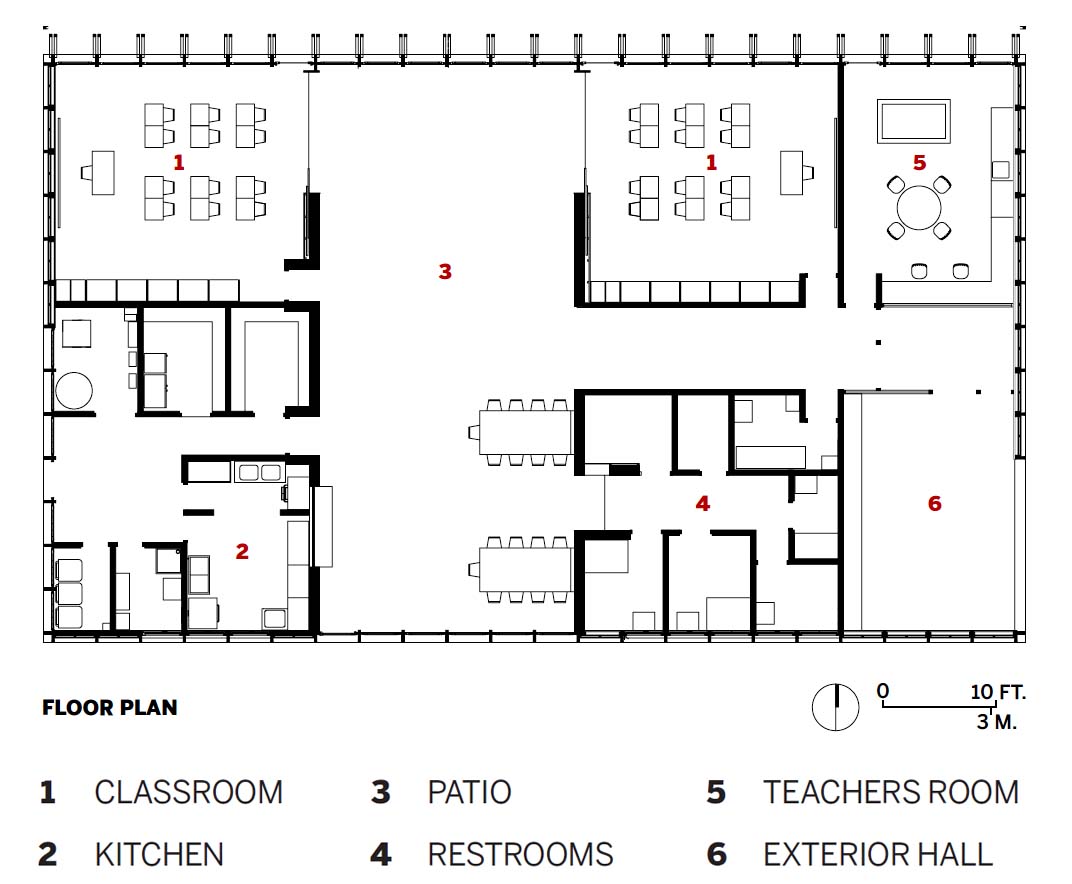