Sometimes, a respectful restoration requires radical intervention, even by the most respectful of architects. Graduate and former dean of the Yale School of Architecture Robert Stern, and his New York–based firm Robert A.M. Stern Architects (RAMSA), led the transformation of a neoclassical Carrère & Hastings building at the heart of the university’s New Haven, Connecticut, campus into a center for dining and theater. In the process, they ripped out the old floor slab and the wood paneling in a train-station-scaled refectory, added a skylit two-story annex where there was once a terrace, exposed foundation walls, and carved a new exterior staircase within a prominent quadrangle.

The Schwarzman Center, named for billionaire Blackstone CEO and Yale alum Stephen Schwarzman, who made a $150 million gift toward the project, occupies much of what’s known as the Bicentennial Buildings (actually, one connected L-shaped structure), built in 1901 to honor the 200th anniversary of Yale’s founding. RAMSA’s project is meant to bring students together around the arts and meals—rather than the dining and socializing historically confined within residential colleges and separating those pursuing graduate degrees from undergraduates. It comprises the renovation of the entire northern wing, including the Memorial Rotunda that serves as the hinge with Woolsey Hall, the eastern leg (which was not part of the renovation’s scope and remained largely in operation throughout construction), as well as excavating 8,300 square feet to create an expanded basement level. 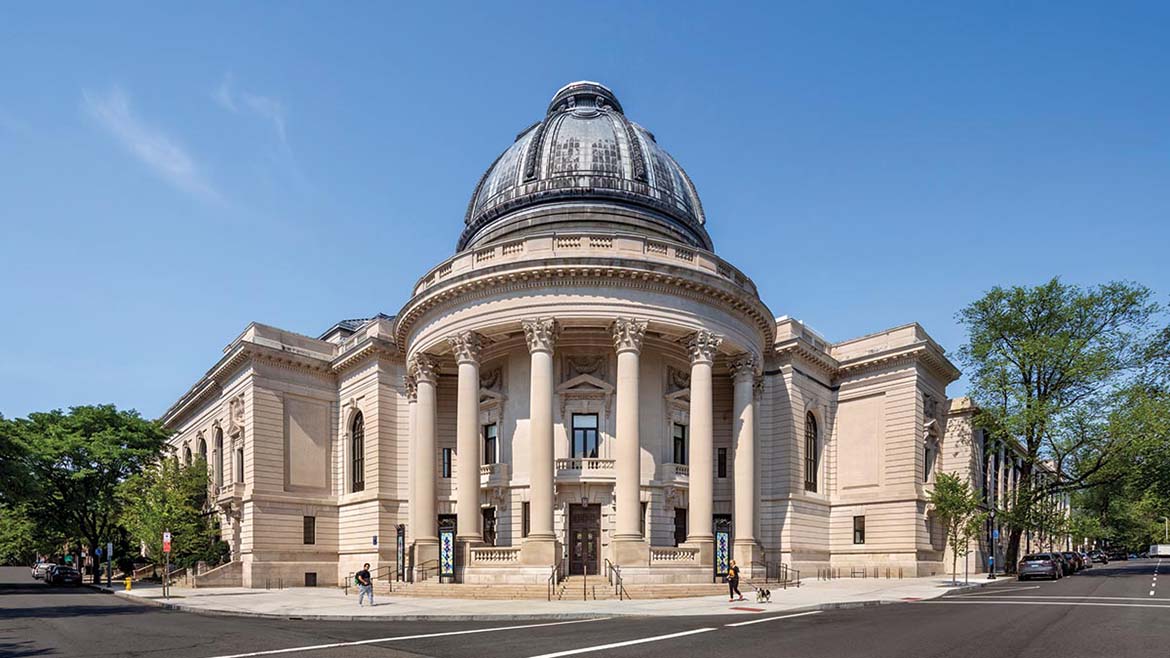 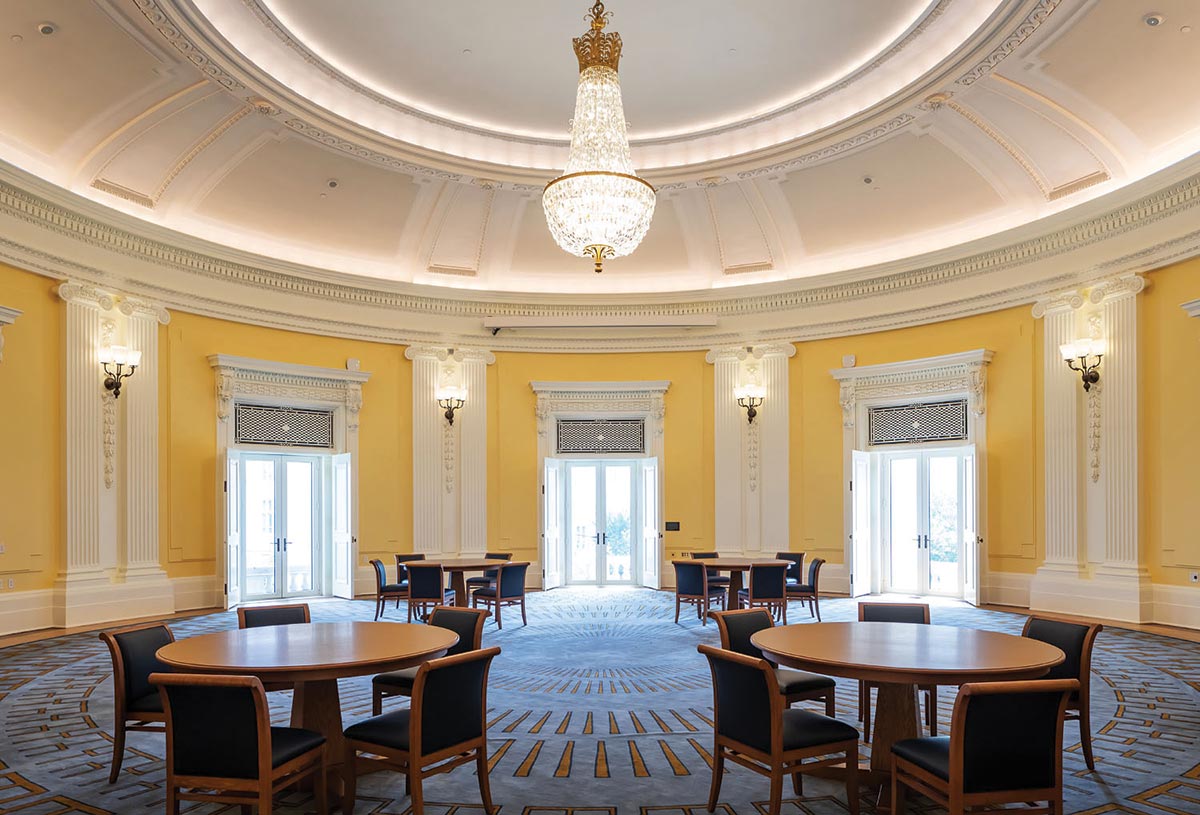 The rotunda is the corner piece between the L-shaped Bicentennial Buildings (1). The striking ceiling lights inside its entrance were converted to LEDs (top). Sconces in the Presidents’ Room (2) were custom designed based on historic photos. The pilasters on which they rest were restored after previously being removed. Photos © Francis Dzikowski, click to enlarge.

The north wing is dominated by the Commons, an ornate 66-foot-high timber-trussed banquet space that had not been touched in its nearly 120-year history. “One might call it benign neglect,” says Stern. “But it is among the great classical spaces that transcends the limitations of program.” Designed around the same time as Carrère & Hastings’s New York Public Library on Fifth Avenue in Manhattan (and also bearing the Schwarzman moniker now), the Commons has a similar size and grandeur as that building’s Rose Main Reading Room, both with rich wood surfaces and statement chandeliers.

What the immense hall needed, however, was a good cleanup, and an HVAC system—it was neither heated nor cooled. There was also the issue of the concrete floor slab, which had to be fully replaced. (The slab in the basement level, previously home only to storage and the kitchen, was lowered 30 inches to accommodate new programming, including a more casual eatery, the RAMSA-designed Underground, which now occupies the space beneath the Commons.) The oak panels that line the lower walls of the Commons were removed and restored off-site, then reinstalled 2 inches farther into the room from their original position, after also creating cavities in the 30-inch-thick brick bearing walls, to make room for mechanical equipment. Supply and intake air grilles were incorporated into the panels’ woodwork. Over a century of grime, including decades of cigar and cigarette smoke, were cleaned from the exposed brick above the panels, and the wood roof structure above that. 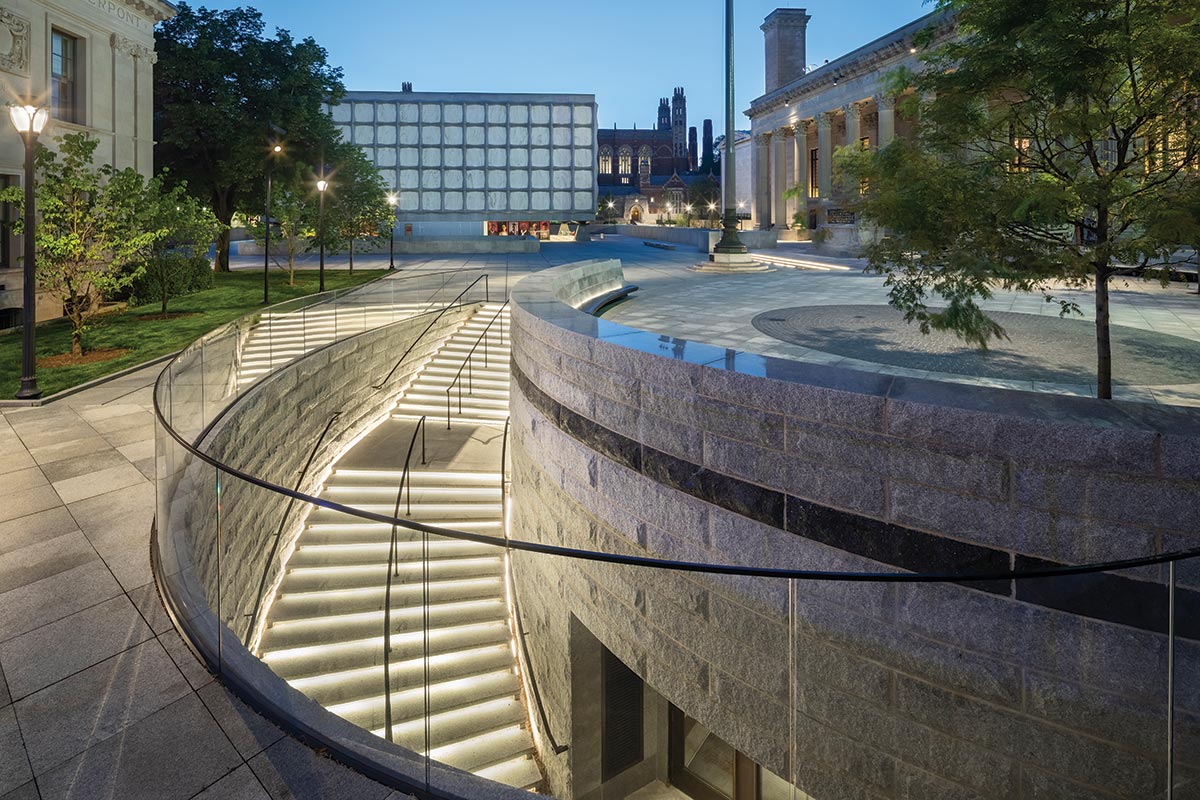 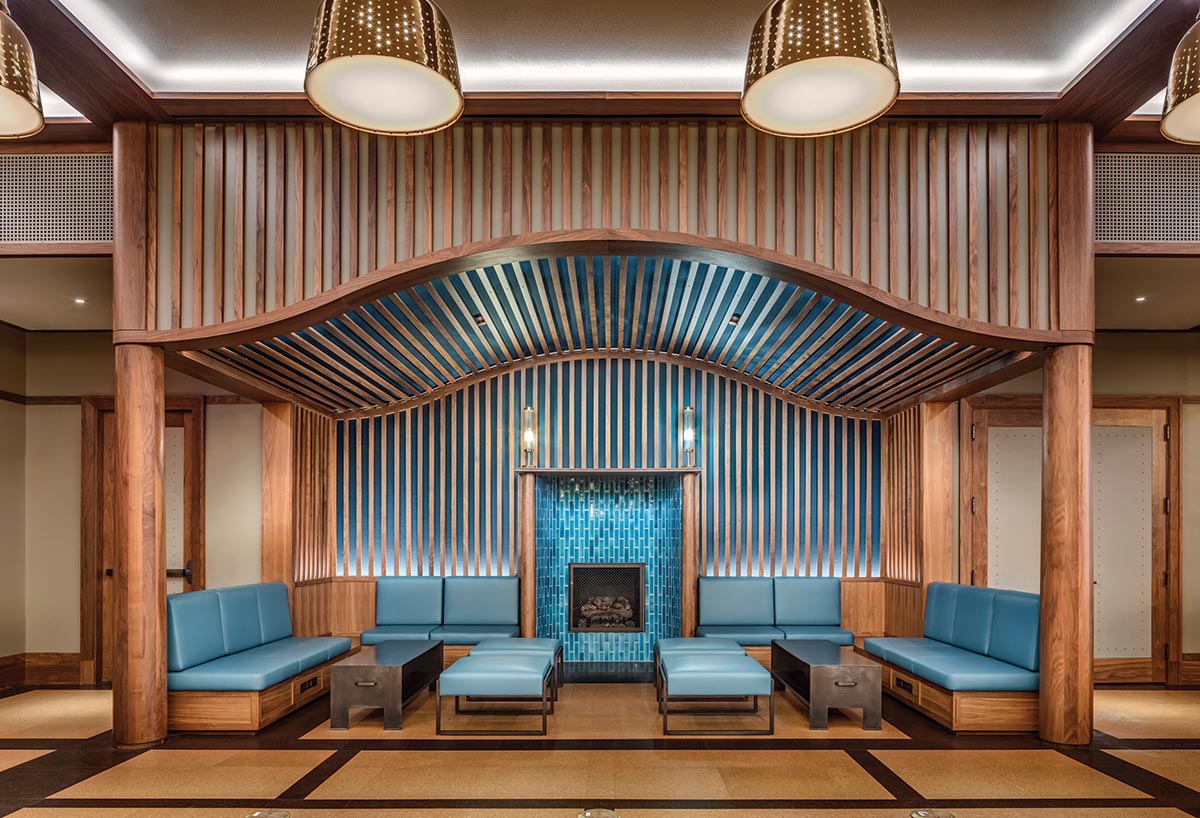 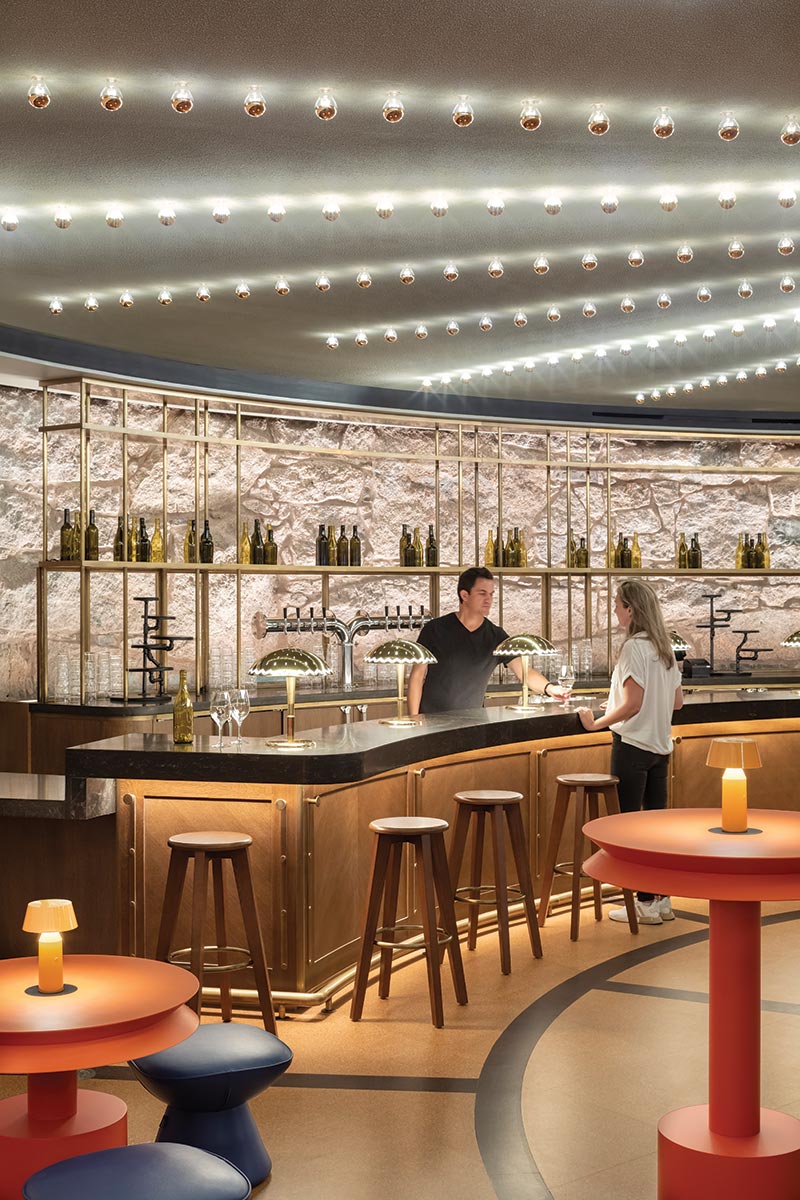 A curving exterior staircase (3) leads to the expanded basement, which includes a new eatery, the Underground (4), with cozy fireplaces. The Well (5), a new bar, features exposed granite and ceiling lighting to mimic that in the Rotunda’s entrance. Photos © Francis Dzikowski. Taken in July 2021 in accordance with Yale University's COVID-19 guidelines.

Not only is the Commons one of the rare spaces on campus that now welcomes all students—as well as faculty, staff, and visitors —it is also a performance space. Micro-perforated acoustic wood panels were added between the purlins of the roof structure, where a metal catwalk was also installed, and the chandeliers were motorized to lift out of the way of the many giant video screens that have been inserted throughout.

Meanwhile, in the rest of the northern wing, a variety of smaller-scale restoration projects were undertaken. Working with L’Observatoire International, RAMSA made significant upgrades to the lighting—replicating historic fixtures, designing contemporary ones, and transitioning all illumination to LEDs. Sprinklers were added, as were ramps and elevators to make the building fully accessible.

On the first level of the Rotunda, RAMSA restored the vaulted ceiling of the War Memorial, which had at some point been painted black, to its original off-white color. (Its marble walls, engraved with the names of alumni who died in service of their country, inspired Yale undergraduate Maya Lin’s competition-winning design for the Vietnam Veterans Memorial in Washington, D.C.) A level above that, in the Presidents’ Room, the architects put back the decorative pilasters and sconces previously removed from its curved walls. And a level above that, the Dome, which for years housed the yearbook staff in dark offices, has been turned into a state-of-the-art performance space. “It’s our black-box theater, except it’s white and round,” jokes the Schwarzman Center’s marketing and communications director, Maurice Harris.

In the Rotunda’s basement, in a former storage space, RAMSA exposed the colossal Stony Creek granite blocks of the rounded foundation walls, which had previously been plastered over. They now offer a stunning backdrop for the Well, a new bar, whose cavelike atmosphere is a counterpoint to the cozy, walnut-clad Arts and Crafts-inspired Underground nearby on the same level (that dining area is an additional performance space, with a stage and flexible seating arrangements). One can enter the newly excavated portion of the basement—which includes a large dance studio, galleries, and a grab-and-go food store called the Bow-Wow (in honor of Yale’s bulldog mascot)—from a curving new exterior staircase. Also lined in granite, this below-grade expanse is carved into the northeast corner of Hewitt Quadrangle—more commonly known as Beinecke Plaza after Gordon Bunshaft’s celebrated Beinecke Rare Book Library, just to the west.

RAMSA’s contribution to the stately Indiana-limestone-clad building’s exterior is a three-story annex, built where a one-story volume along the north elevation stood. It looks as if it had always been there, and for good reason: the design for it came, in large part, from Carrère & Hastings. RAMSA uncovered a drawing the Beaux-Arts firm had done of an addition to that elevation just a few years after the building was completed. “From my experience, the original building was either underplanned or money ran out,” says Stern of the existence of this drawing. “It’s wonderful to have that documentation, but options for an addition are limited, and this was the logical way to go.” 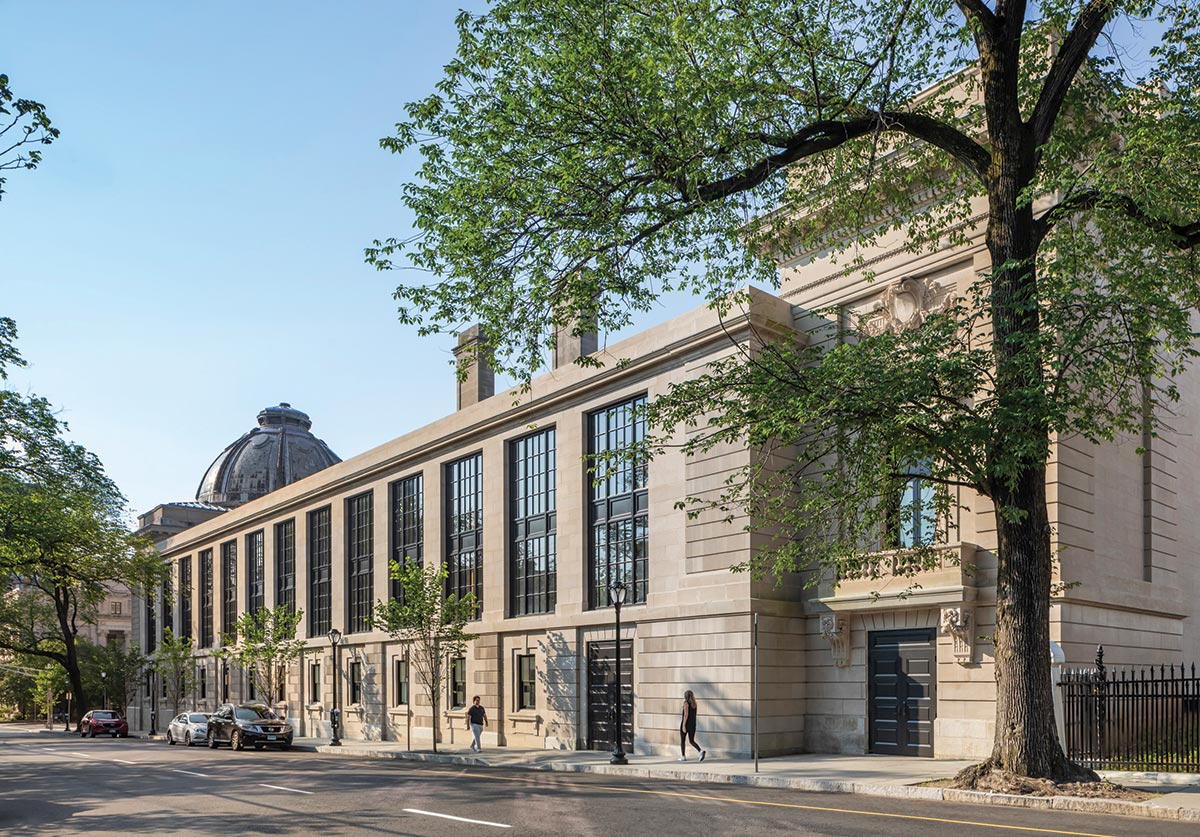 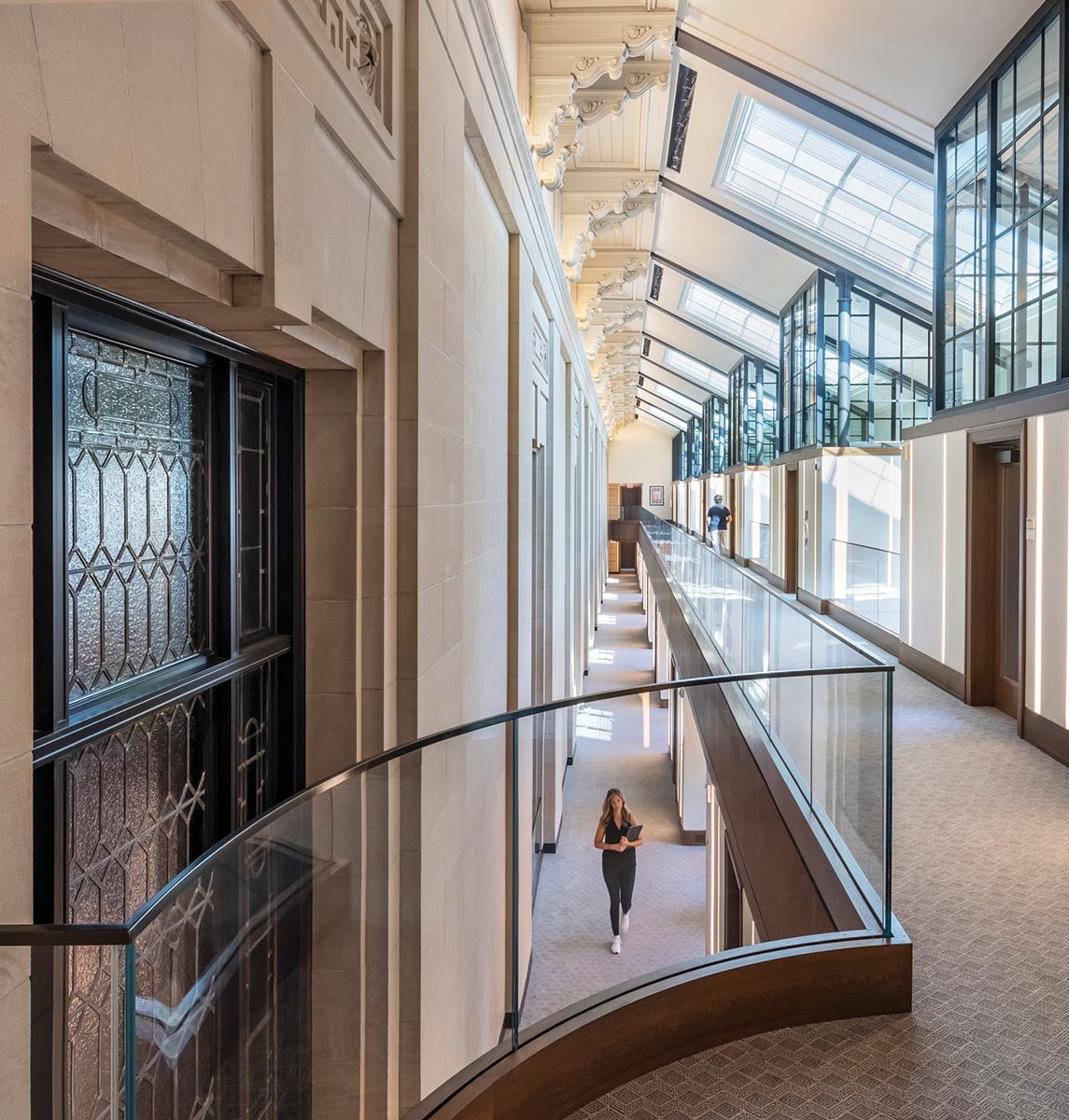 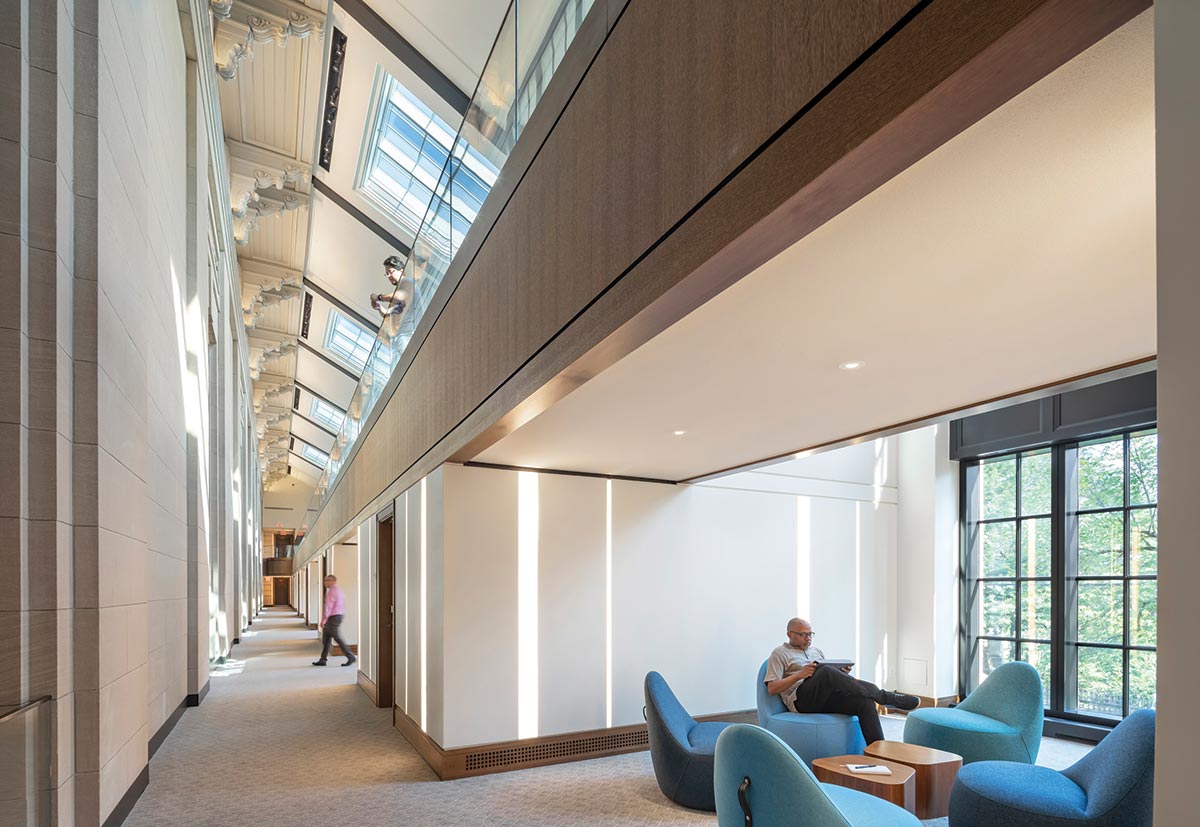 The existing one-story portion was taken down, creating a uniform three-story facade. The first floor’s new interior houses the crisply designed food hall for the Commons. Above it, a long skylit space is bathed in sunlight. Offices on the mezzanine alternate with double-height lounges and study areas below. RAMSA replaced what were once exterior windows with ones comprising lead-camed translucent glass, to match the historical windows, with a laminated IGU, to provide acoustic separation and the one-hour fire rating now needed between enclosed interior spaces.

“I have a preference for new things to be respectful of old things,” says Stern, whose two residential colleges at Yale, completed in 2017 as ground-up construction, carry forward the spirit of stone and brick Gothic on campus. “I’m proud to have made a substantial contribution to Yale’s evolving heritage—both academic and architectural,” he adds, about his own long history at the school. 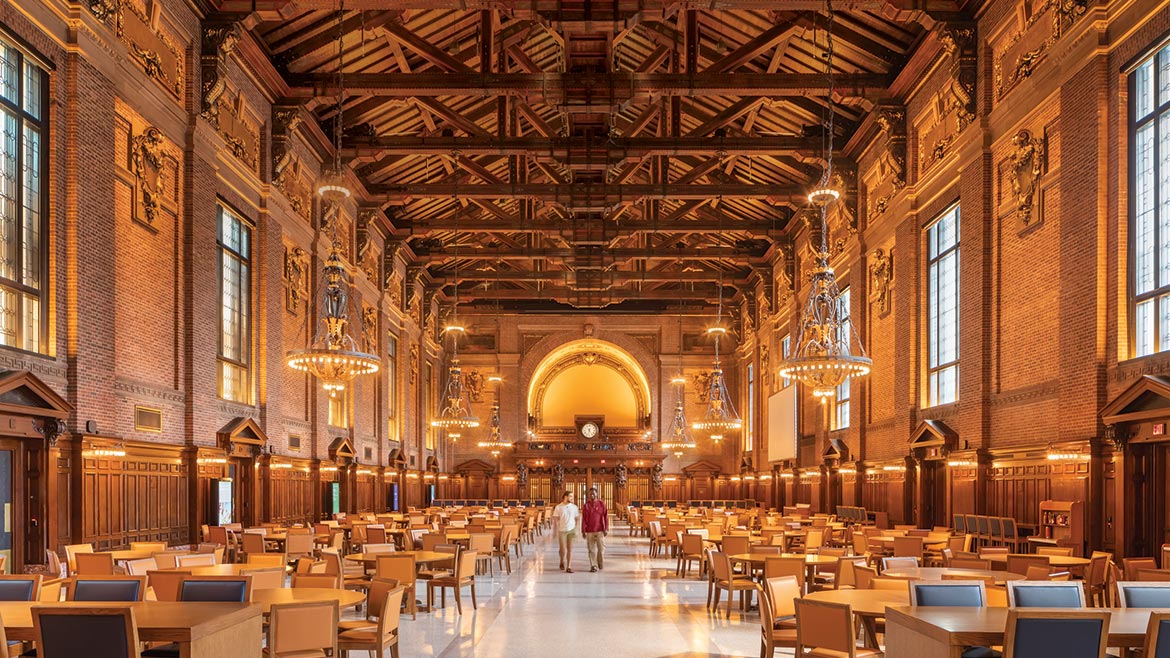 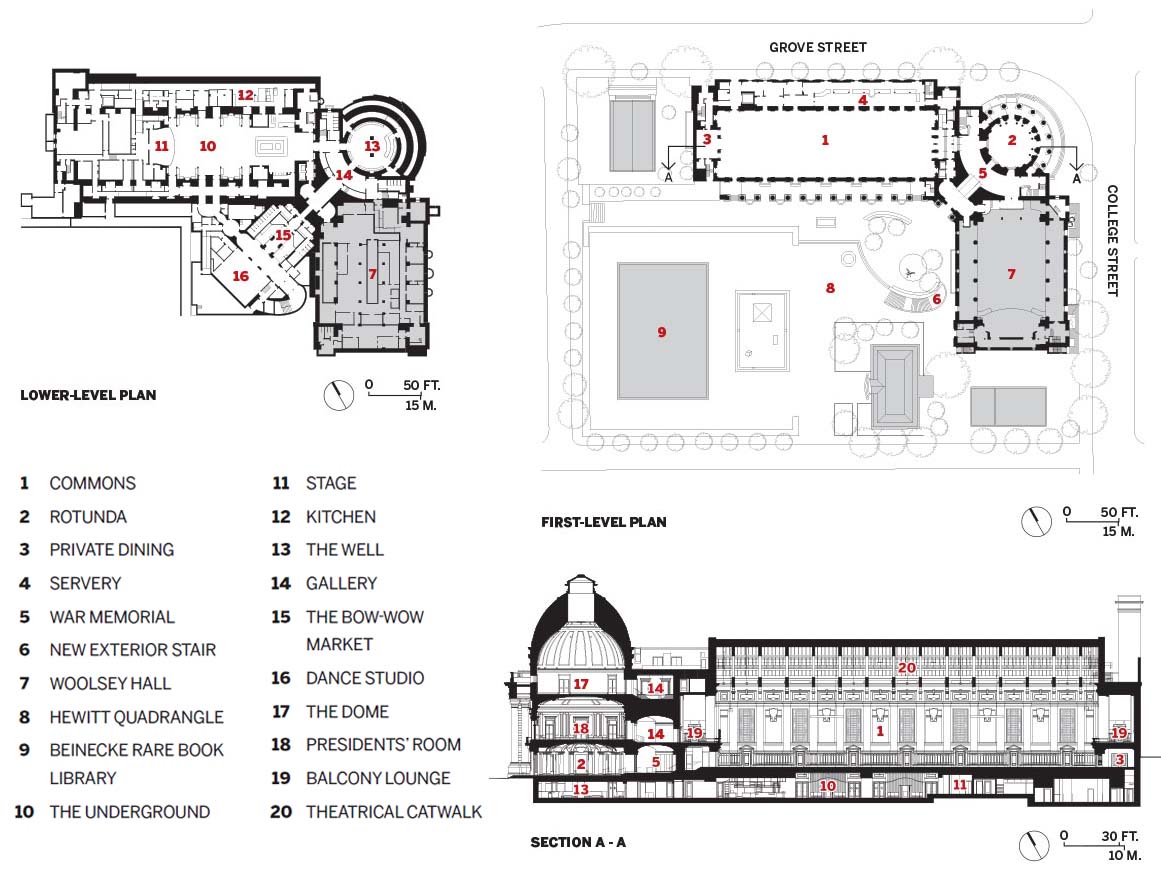 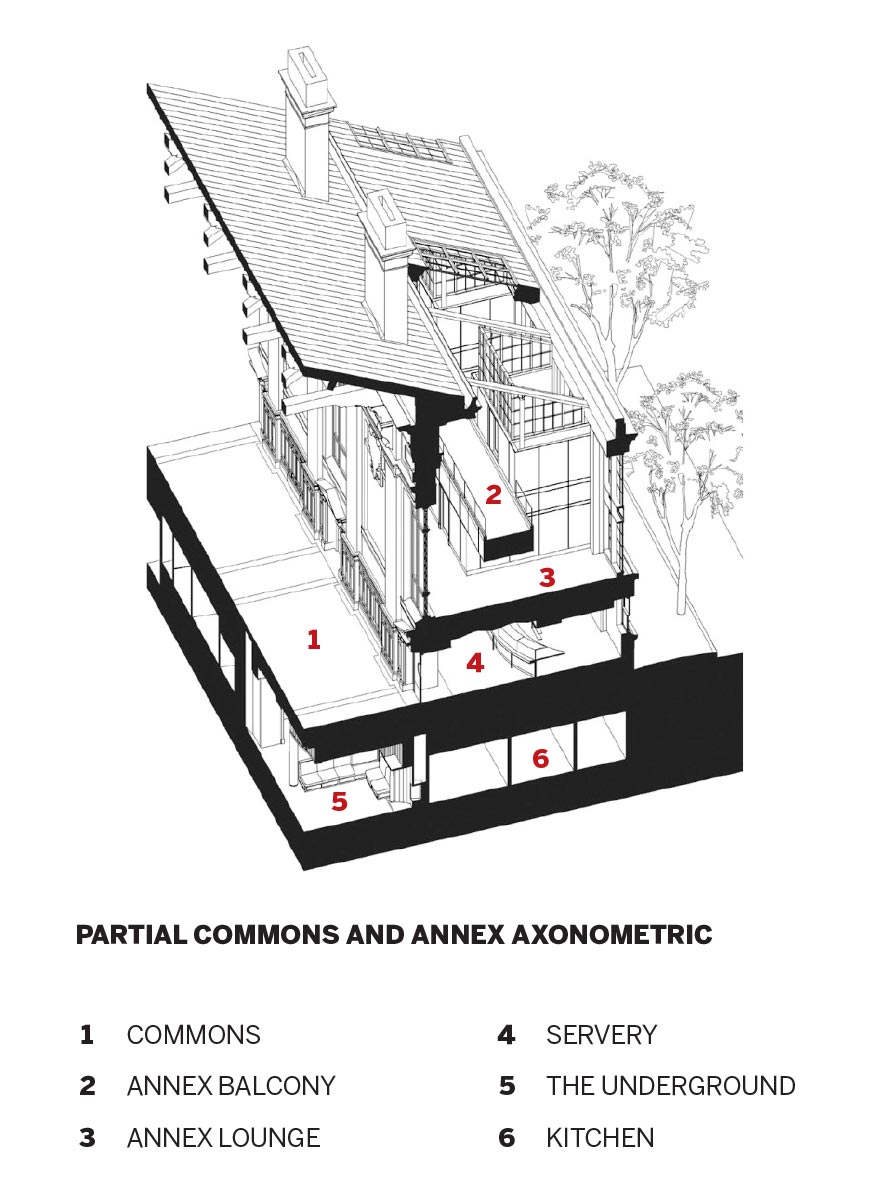