This website requires certain cookies to work and uses other cookies to help you have the best experience. By visiting this website, certain cookies have already been set, which you may delete and block. By closing this message or continuing to use our site, you agree to the use of cookies. Visit our updated privacy and cookie policy to learn more.
Home » SoFi Stadium and Hollywood Park by HKS with Studio-MLA
ProjectsBuildings by TypeLandscape ArchitecturePark & Public Space DesignStadium Design

SoFi Stadium and Hollywood Park by HKS with Studio-MLA

In the old days, stadiums often created neighborhood dead zones, disrupting the urban fabric with their monumental scale, fortresslike exteriors, and periods of dormancy. But a trend toward mixed-use complexes, active 365 days a year, has emerged, providing opportunities for lucrative development—and for modest or struggling areas to transform themselves into destinations. Across the nation, new complexes are combining professional sports with entertainment—from theaters to amusement parks—along with working, living, lodging, shopping, and dining.

Far less common, however, is the integration of new, publicly accessible parks. But that’s a key component of L.A.’s 298-acre Hollywood Park, a phased development in Inglewood, California, on former racetrack grounds. Along with the 3.1 million-square-foot, 70,000-seat SoFi Stadium—home to the city’s two National Football League teams, the Rams and Chargers—the master plan, by Hart Howerton with HKS, called for 25 acres of open green space and a 6,000-seat theater. The stadium (reconfigurable to 100,000 seats) opened in September 2020, and the YouTube Theater last summer. Eventually, there will be a 300-key hotel, plus up to 5 million square feet of offices, 890,000 square feet of retail/restaurants, and 2,500 residences. 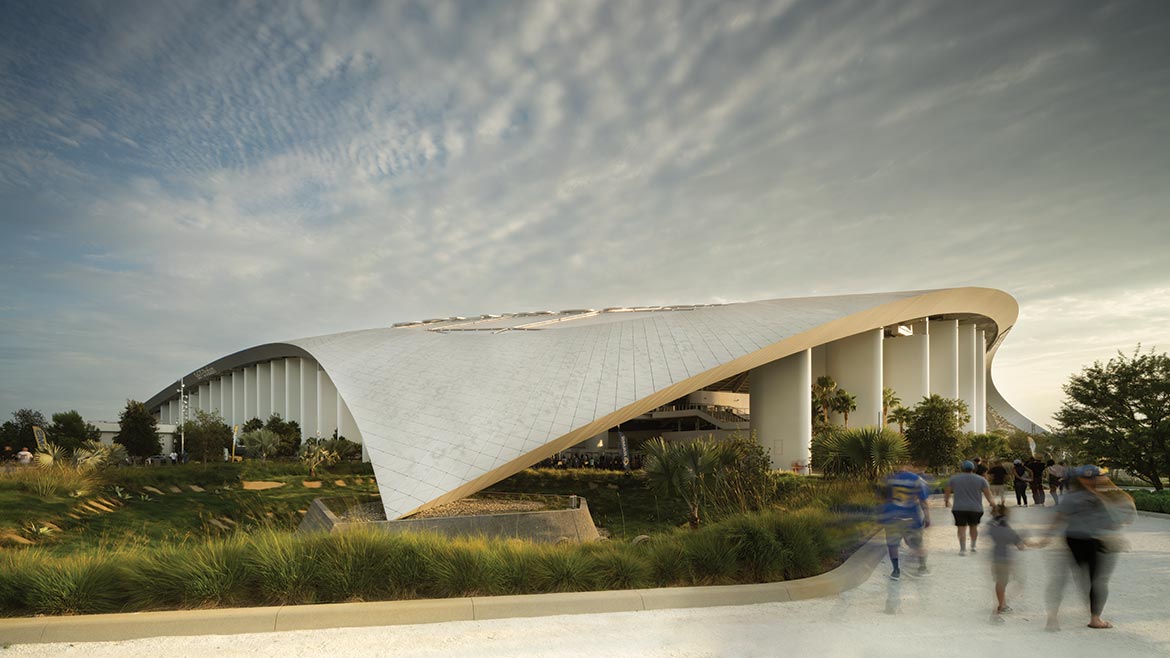 When Rams owner Stanley Kroenke acquired the vast site and hired HKS to design the stadium and linked theater, a critical question was about how to make the building a welcoming neighborhood asset. Also challenging—with a flight path into LAX Airport directly above—were FAA height restrictions. HKS responded by embedding the field and spectator bowl 100 feet below grade. A 27.5-acre roof canopy—featuring translucent, ethylene-tetrafluoroethylene (ETFE) panels, some of them operable—spans over the stadium, theater, and 2.5-acre American Airlines Plaza between them. The building has no conventional facades or enclosing walls, though it has some vertical supports, reinterpreting the classic entry colonnades of older arenas. With its hovering, overarching canopy touching the ground in only four places, the stadium has an openness that invites views in and exploits the indoor-outdoor potential in Southern California’s mild climate.

The deep excavation became an opportunity to create, along the building’s inner periphery, terraced “canyons”—features echoed in the plaza. Covered, yet open to breezes—as is the entire arena—these lushly planted ravines integrate stairs, escalators, and dining/gathering patios. With the field’s innovative and enormous video board visible throughout the building, these “interventions change the experience of the game—it’s no longer a static observation piece,” says landscape architect Mia Lehrer, president of Studio-MLA, which collaborated with HKS to make the building and landscaping “inseparably intertwined,” as HKS principal Lance Evans puts it.

As part of that “dynamic and symbiotic relationship,” says Lehrer, “we sculpted the land to engage the building and celebrate [the character of the landscape] through terraces, promenades, and water features.” While SoFi’s “canyons” highlight native vegetation, the surrounding parkland, recontoured with soil from the excavation, expands the diversity. Its trees and plants draw from the entire “Mediterranean” biome, which includes Southern California as well as southwestern Australia, South Africa, Chile, and the Mediterranean Basin—regions with very similar climates and weather patterns, due to their proximity to a west-facing ocean and distance from the equator. Along with educational and wayfinding roles, says MLA associate principal Kush Parekh, the selection “provides a rich, biodiverse habitat for local species, including monarch butterflies, songbirds, and honeybees.”

A six-acre artificial lake—recalling the former racetrack’s manmade pond, a much-loved community amenity—is the centerpiece of the new 12-acre Lake Park, alongside the arena. It uses only reclaimed water, including storm runoff from the vast stadium roof, filtered through natural wetlands, bioswales, and a man-made arroyo. The lakeshores are already popular with pregame partiers. The surrounding surface parking lots—traditionally tailgate terrain—will eventually be phased out, says Evans, probably replaced by underground or otherwise indoor garage space in various buildings on-site. 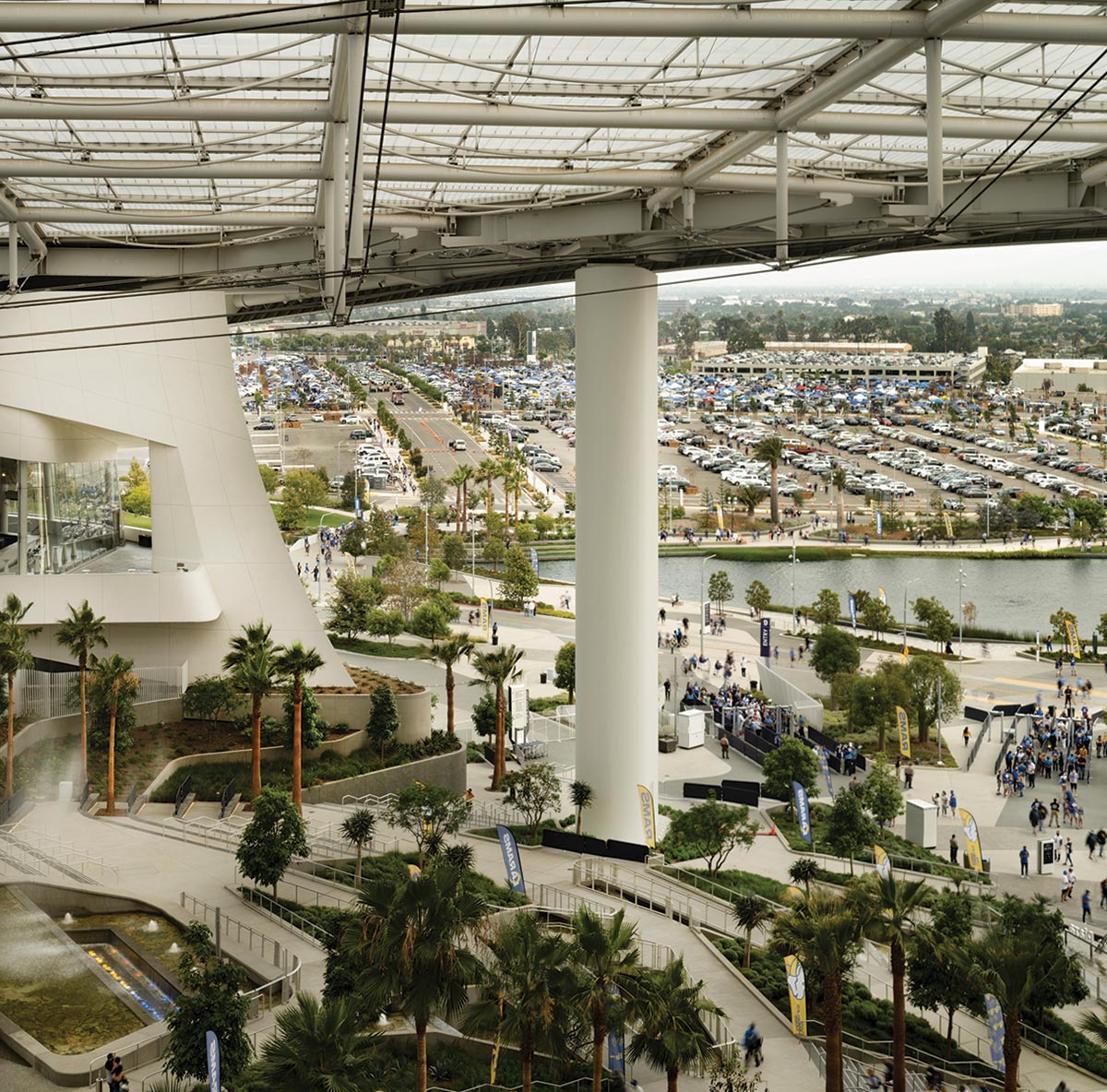 Sports enthusiasts and theatergoers approach the open structure through landscaped grounds (top), visible from the various, terraced levels inside (above). Photo © Nic Lehoux, click to enlarge.

Though pandemic restrictions initially barred spectators from the stadium, they’ve since flocked to its games, school graduations, and performances, including two Rolling Stones concerts in 2021. The arena will have its global, prime-time close-ups when it hosts Super Bowl LVI on February 13 and the summer Olympics opening and closing ceremonies in 2028.

Still, some skeptics have questioned how directly such developments as the reported $5.5 billion stadium will serve Inglewood’s struggling community, which is 40-plus percent Black and 50-plus percent Hispanic of any race, with a pre-pandemic median household income of $54,400. So far, Hollywood Park has made outreach integral to its mission, with events and programs addressing food security, vaccination needs, education, sustainability, and financial empowerment. It has supported youth and scholarship initiatives and, in 2021, donated 97,000 pounds of food locally. Though Super Bowl tickets might be unaffordable to many residents, the event is projected to employ thousands and boost Inglewood’s economy by many millions (and the Rams and Chargers give away tickets throughout the season to community organizations). Also, by contributing thousands of flowering plants to roadway medians throughout the community, and partnering with the city to restore and beautify its other parks, the developer has expanded SoFi’s civic gestures and commitment to publicly accessible green space well beyond its own grounds. 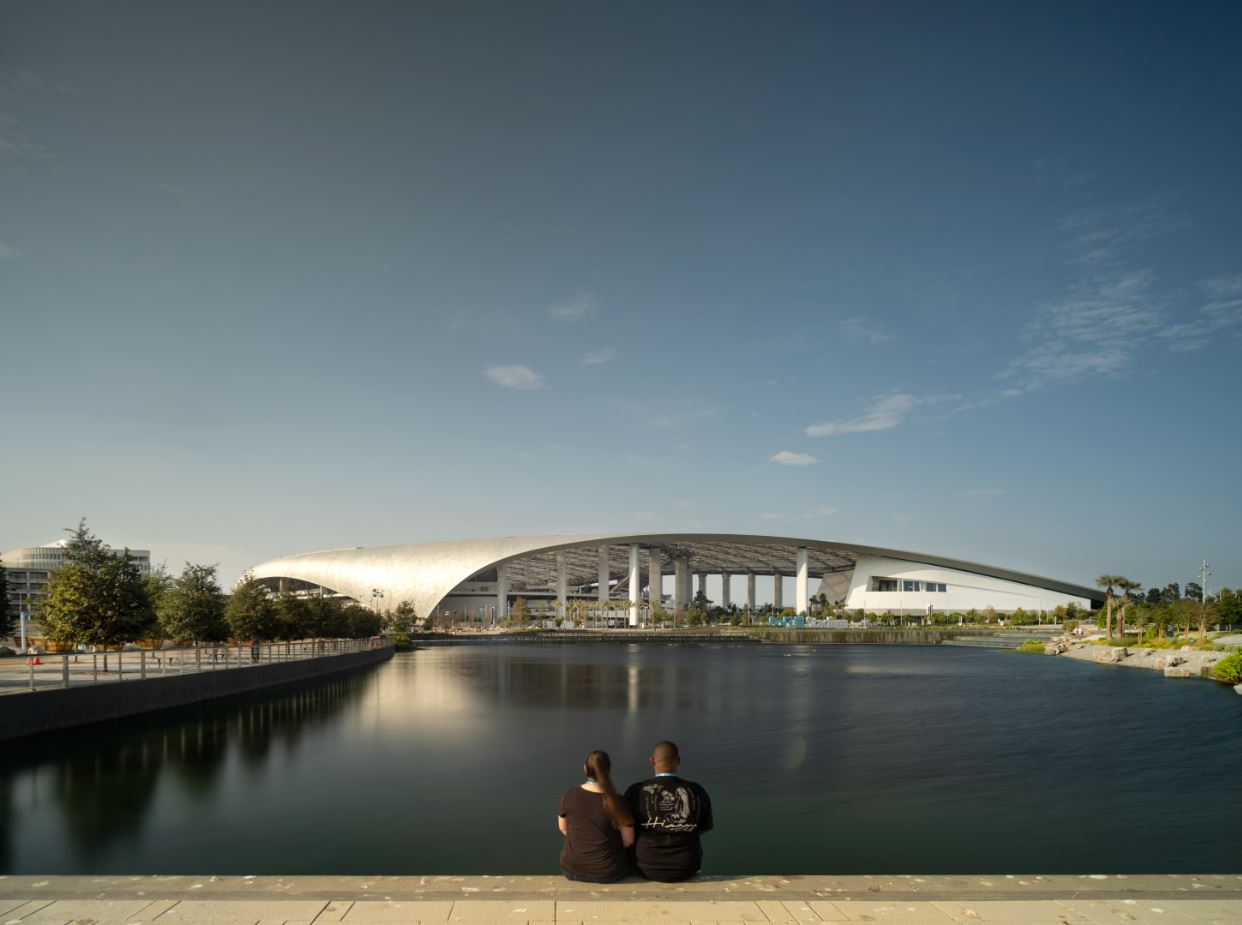 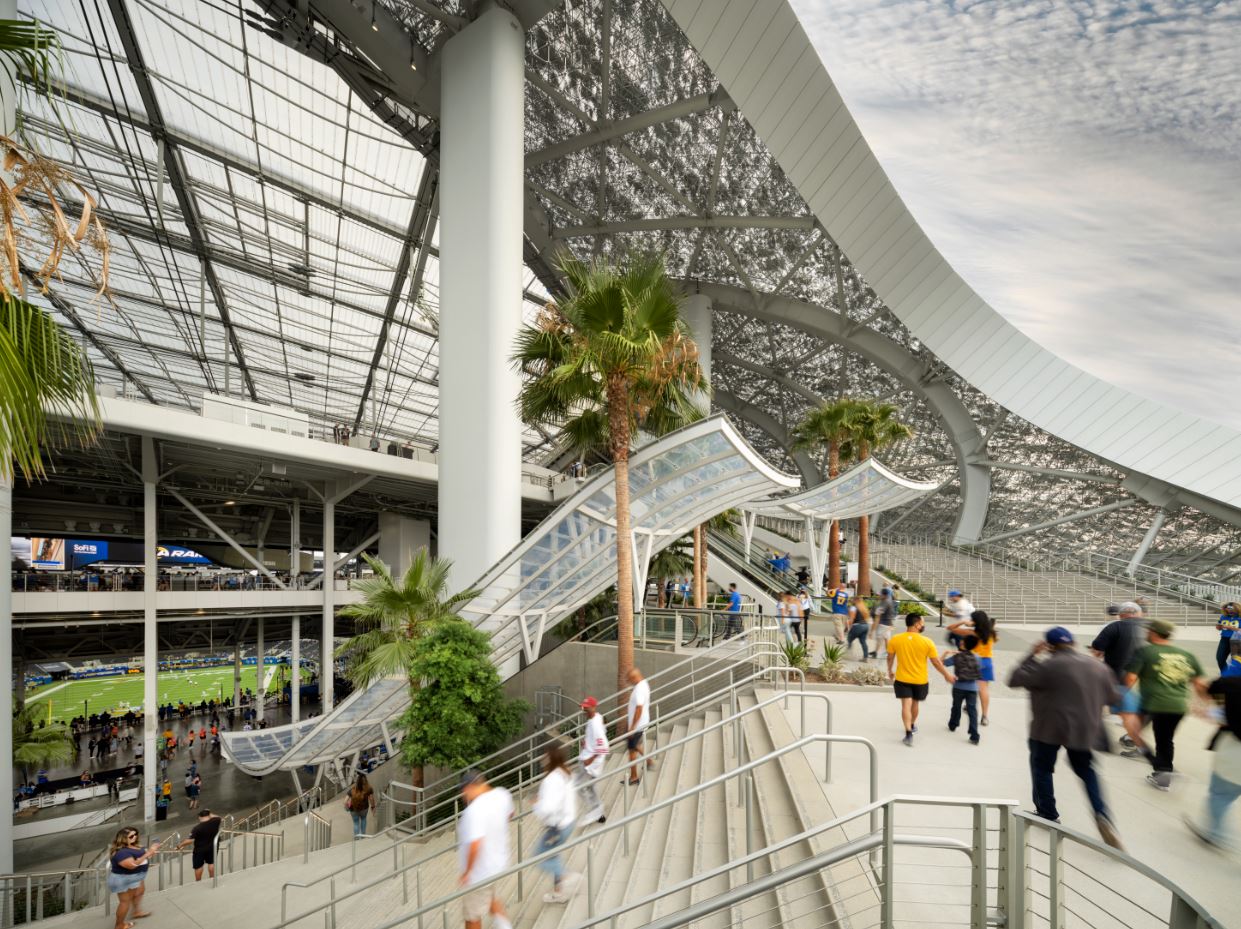 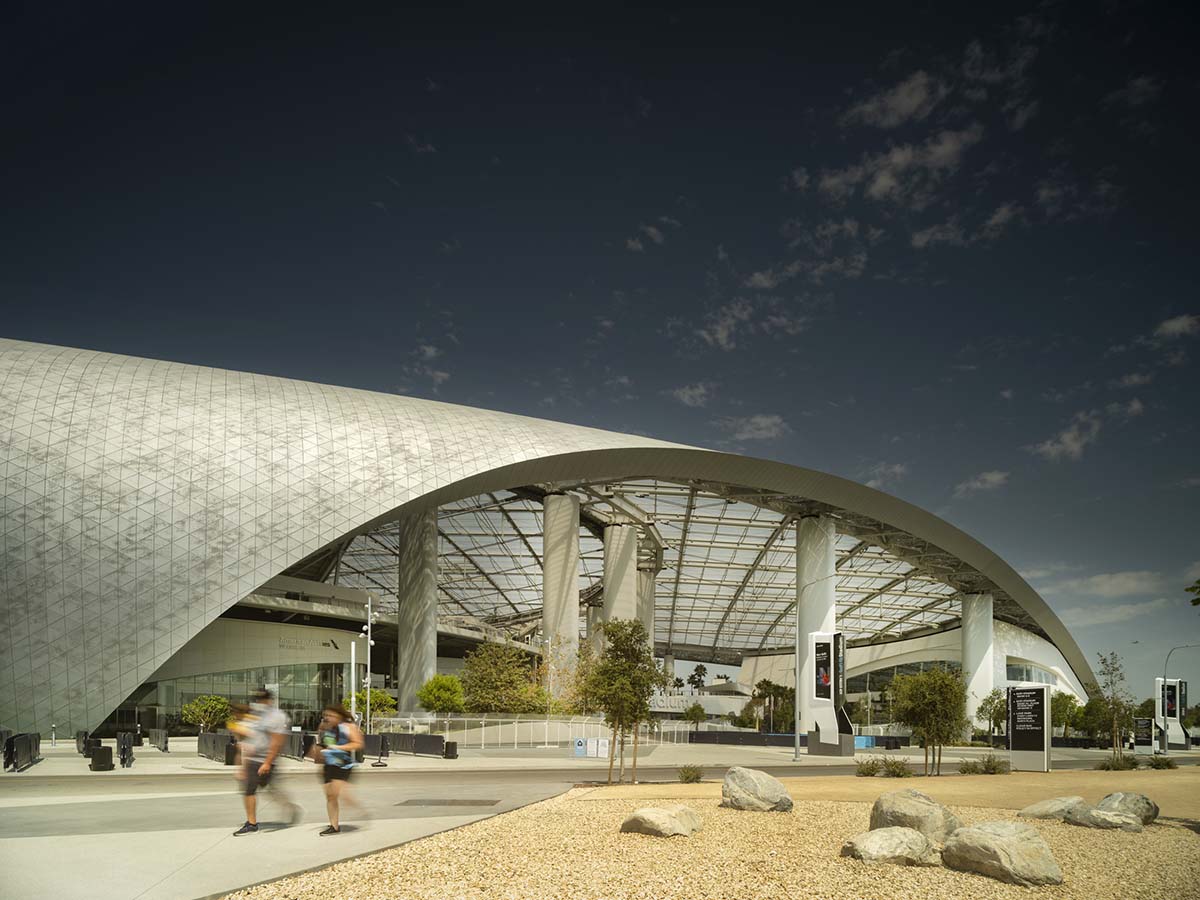 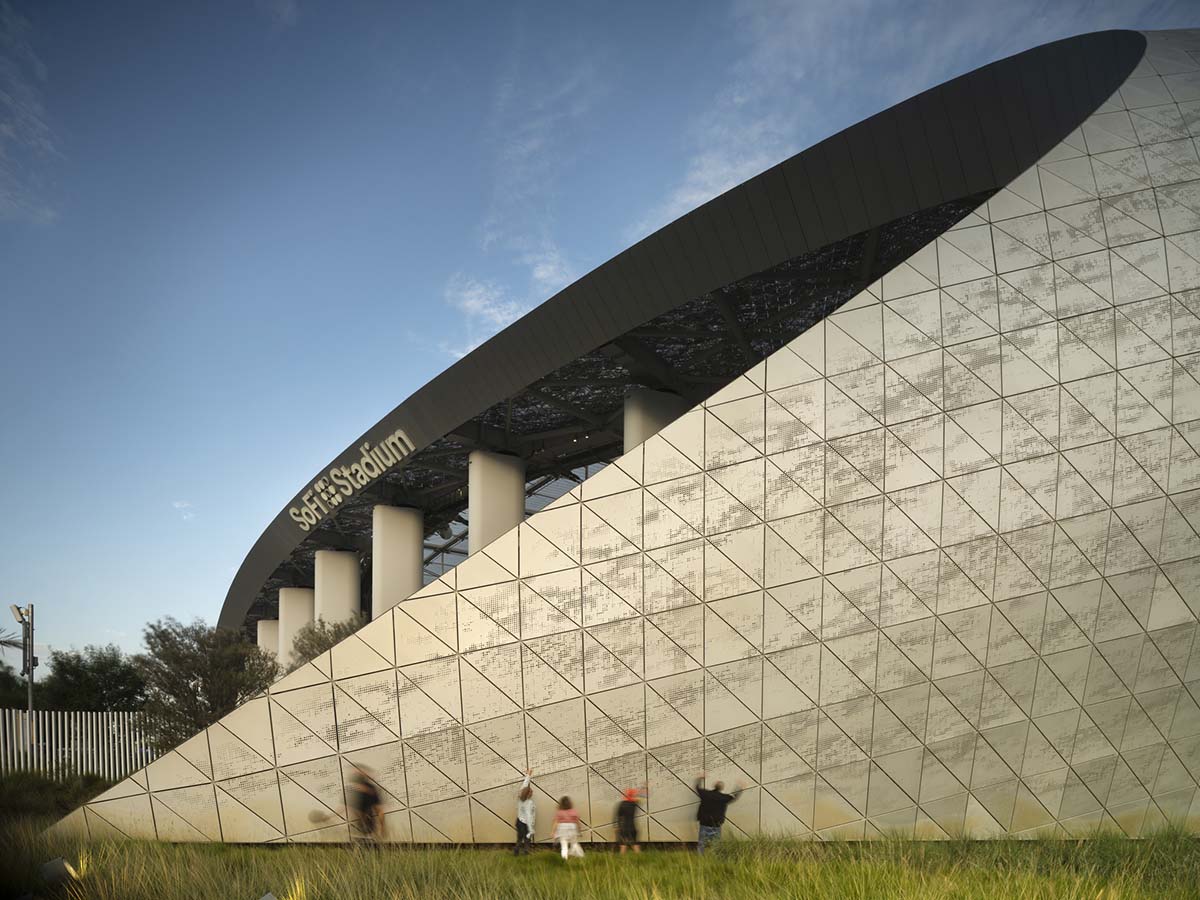 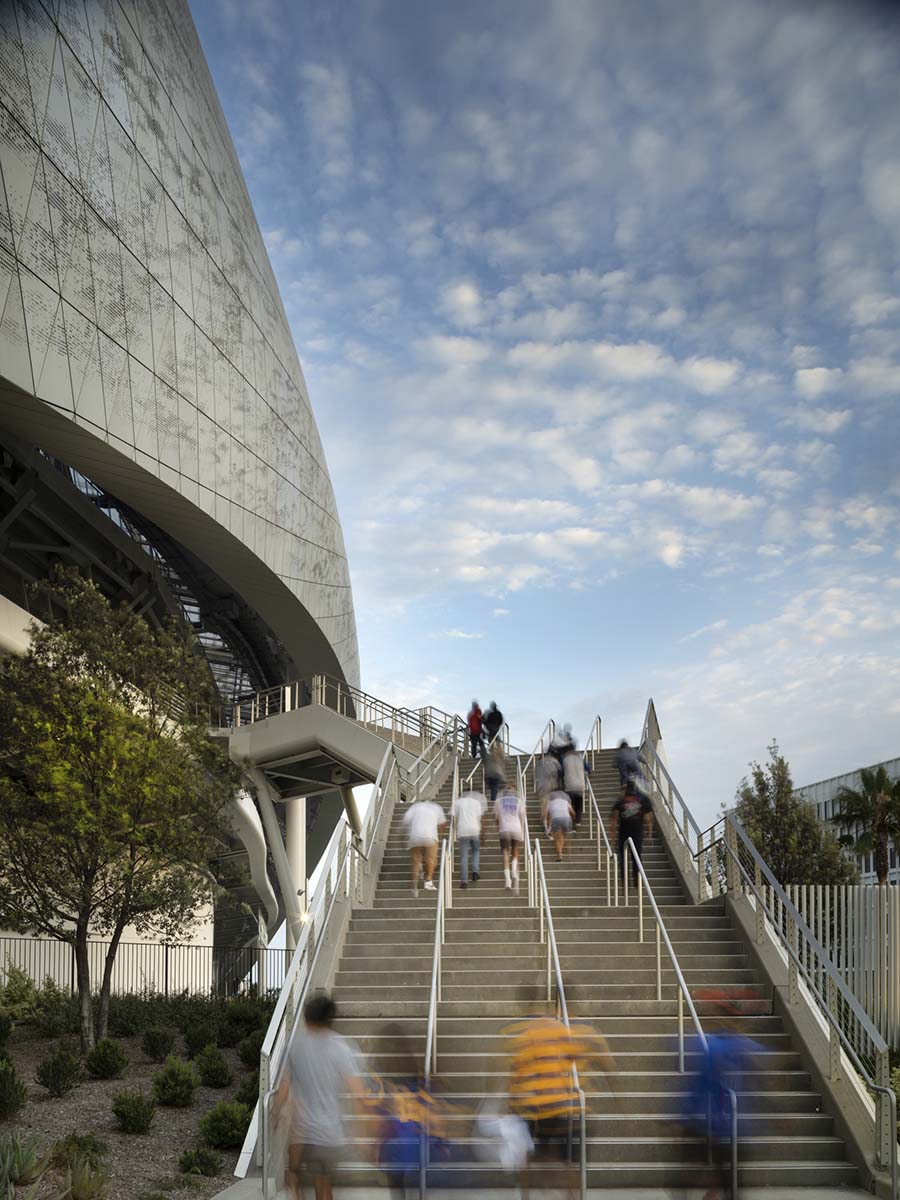 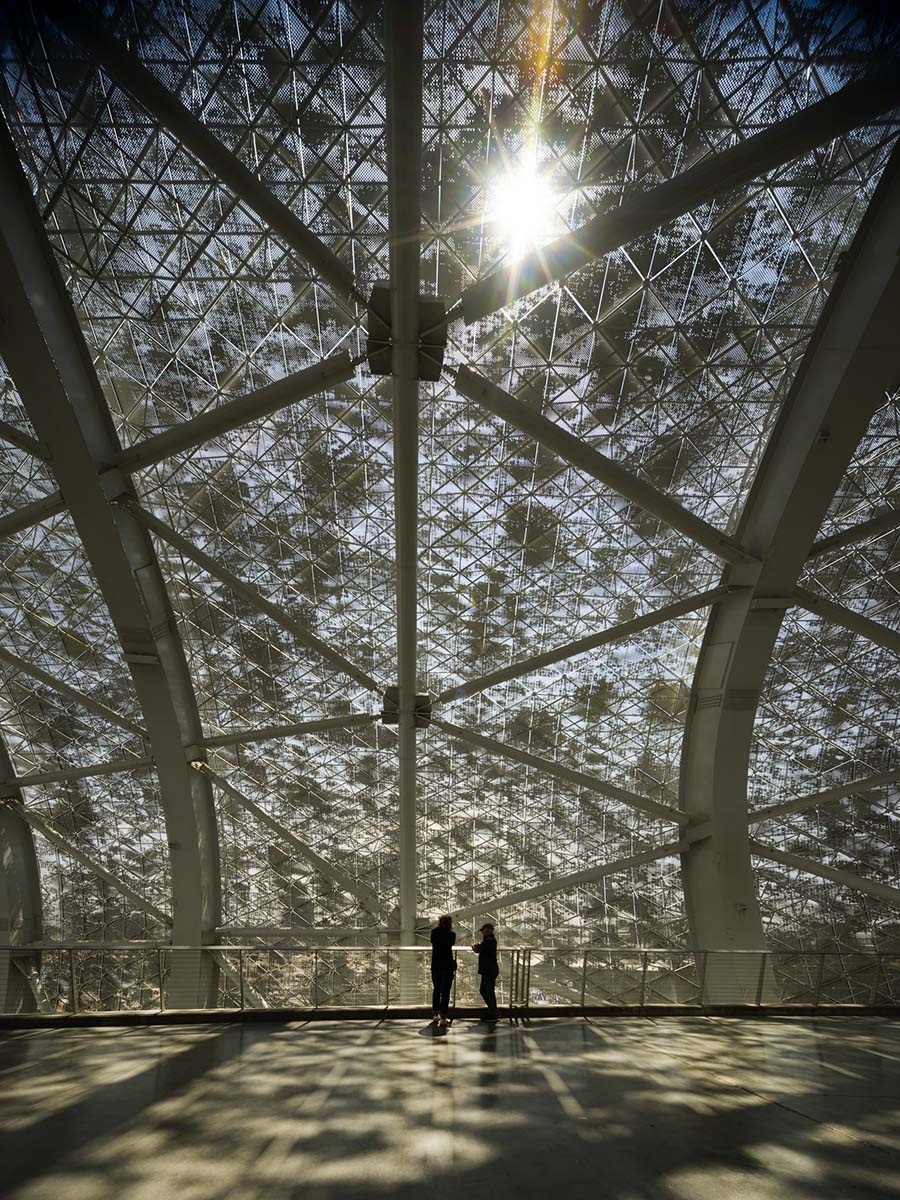 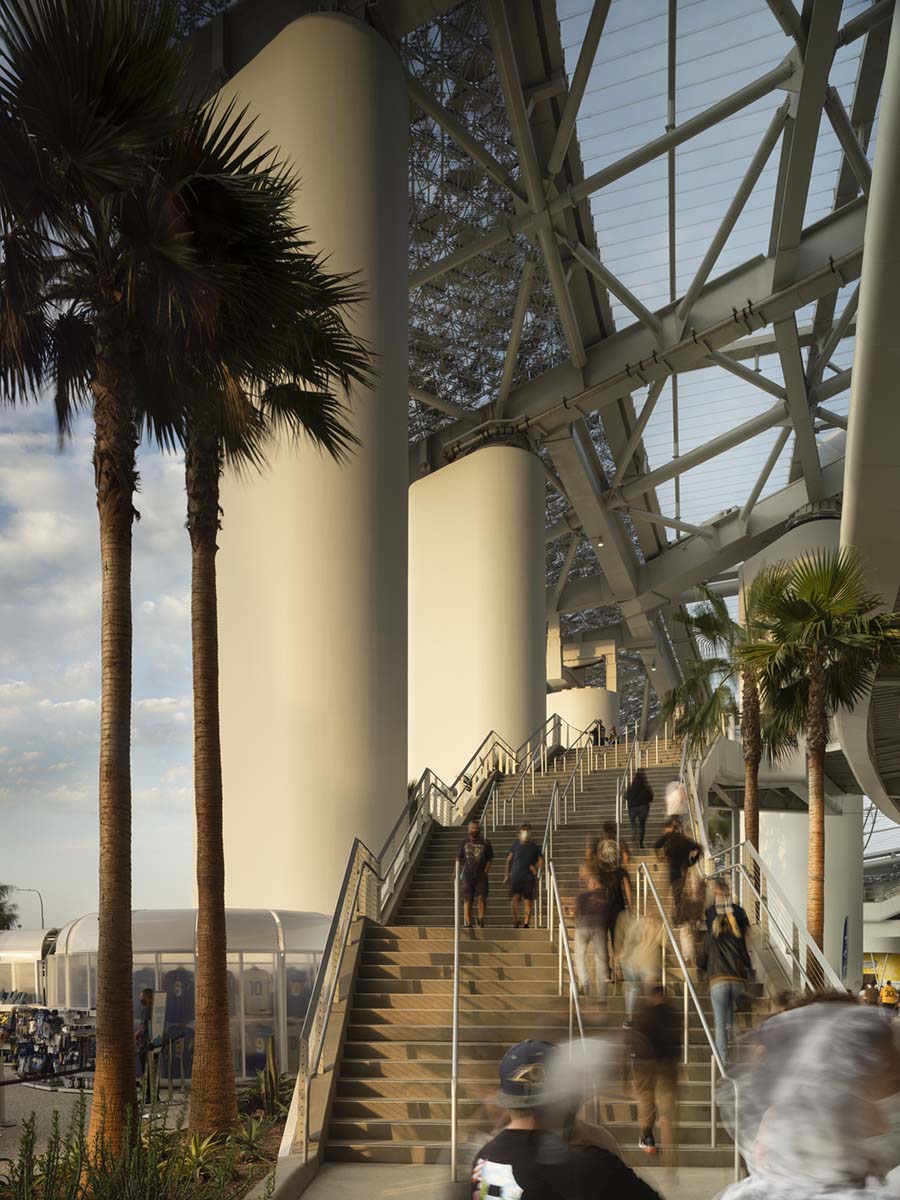 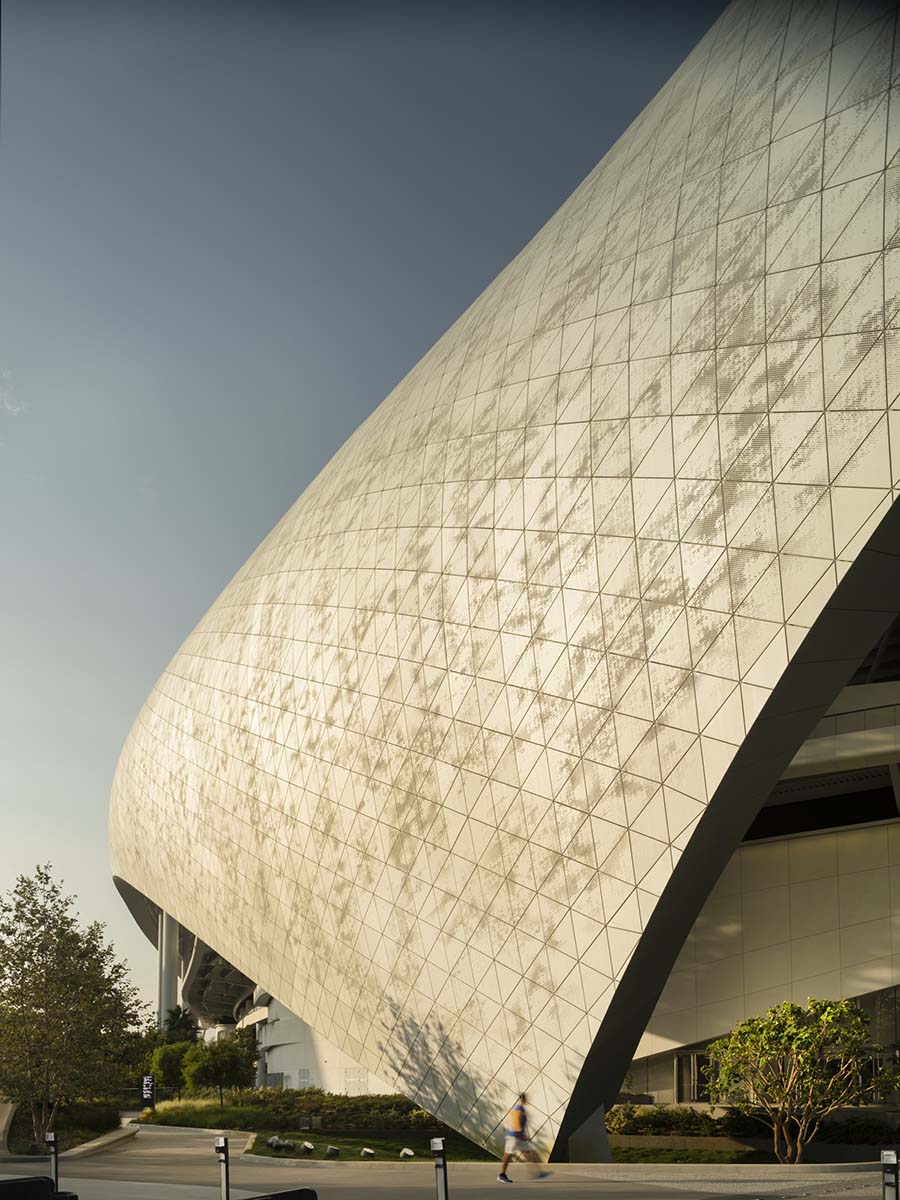 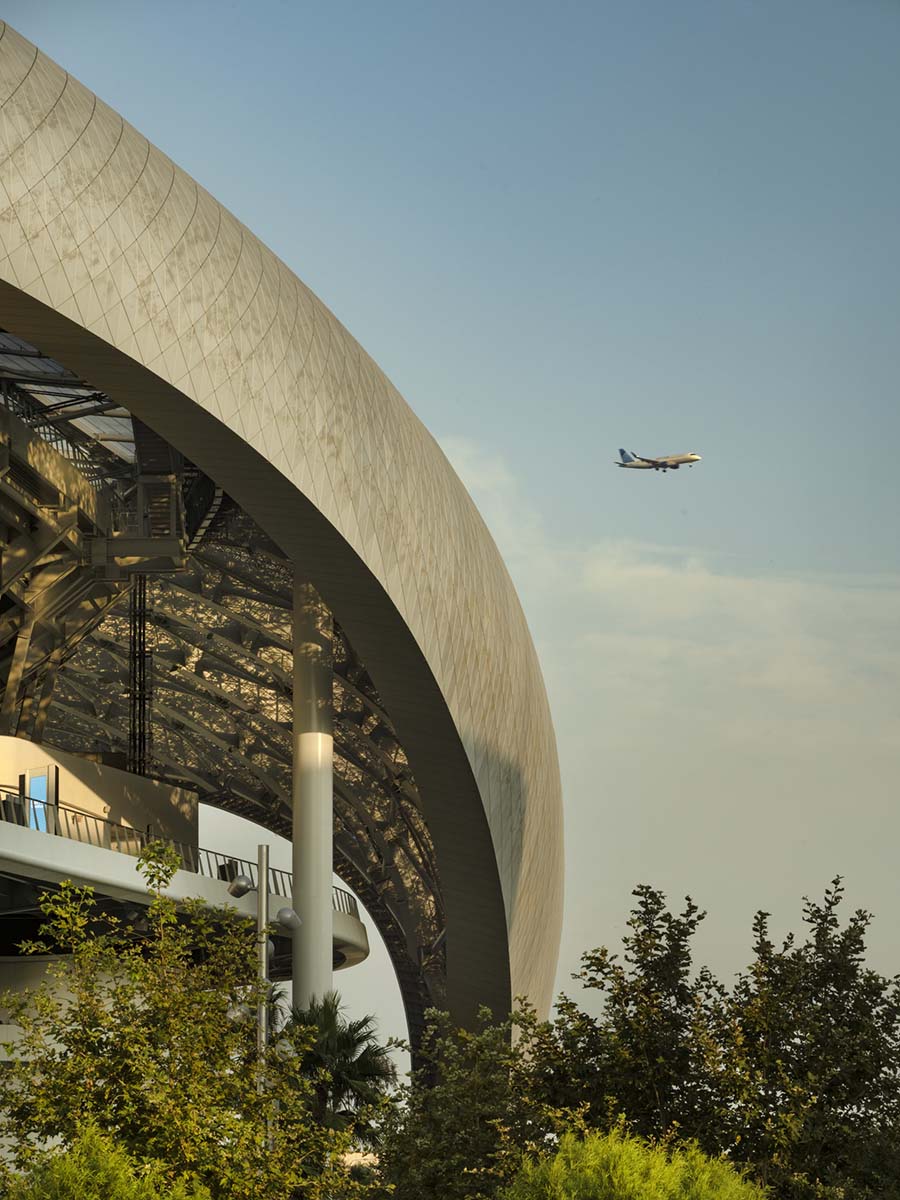 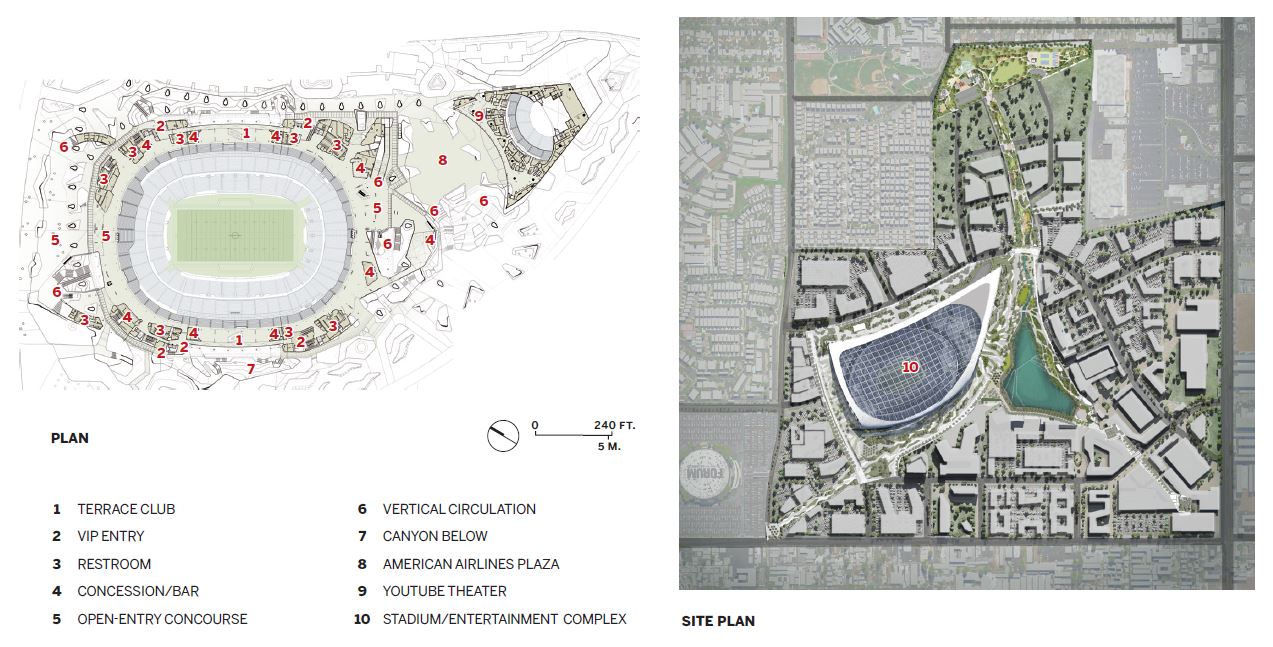 MLA and OMA to Design New Park in Downtown L.A.