This website requires certain cookies to work and uses other cookies to help you have the best experience. By visiting this website, certain cookies have already been set, which you may delete and block. By closing this message or continuing to use our site, you agree to the use of cookies. Visit our updated privacy and cookie policy to learn more.
Home » Winter Park Library and Events Center by Adjaye Associates
ProjectsBuildings by TypeCivic ArchitectureLibrary Design

Building good civic architecture in Florida is an accomplishment worth celebrating. The state’s institutions—notably its museums and universities—have given the public a number of excellent buildings and urban landscapes in the last two decades, but one gets the sense that their quality is due in part to their patrons’ relative autonomy from skinflint governmental bodies. Great civic architecture is a public building that can’t be omitted from any complete account of a city’s history, and the Sunshine State boasts precious few of those. In this context, the delightful new Winter Park Library by Adjaye Associates is exceptional in both senses of the word. 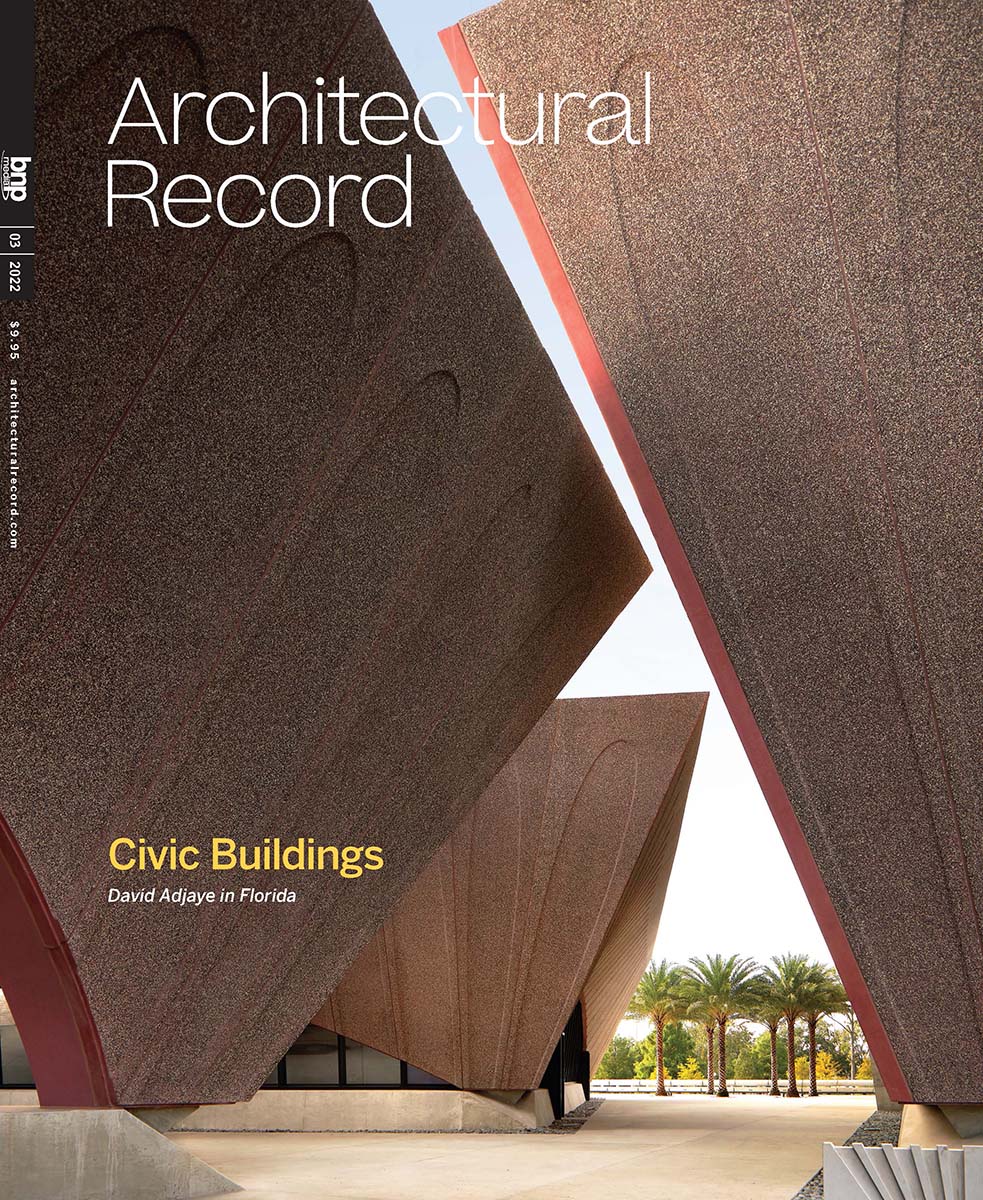 The library is one of three structures—the other two house an events center and an entrance pavilion—that anchor the northwest corner of Martin Luther King, Jr. Park in Winter Park, just north of Orlando. The trio of buildings forms a tight urban composition that creates a suitably monumental presence amid the lush tree canopy of West Morse Boulevard to the north and opens onto a plaza and amphitheater overlooking the park’s lake to the south. In both the library and the events center, the major public spaces are pushed to the perimeter, where they take in expansive views of the park and boulevard, framed by a single enormous arched opening on each facade. 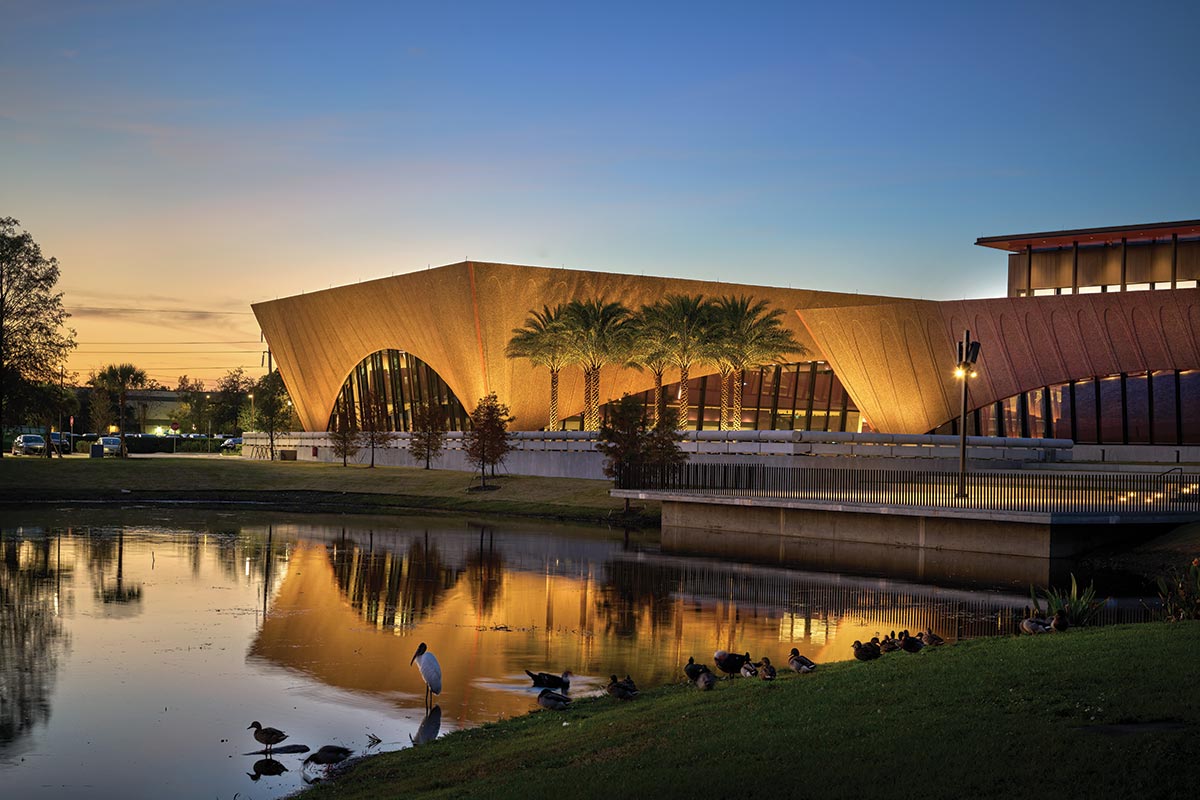 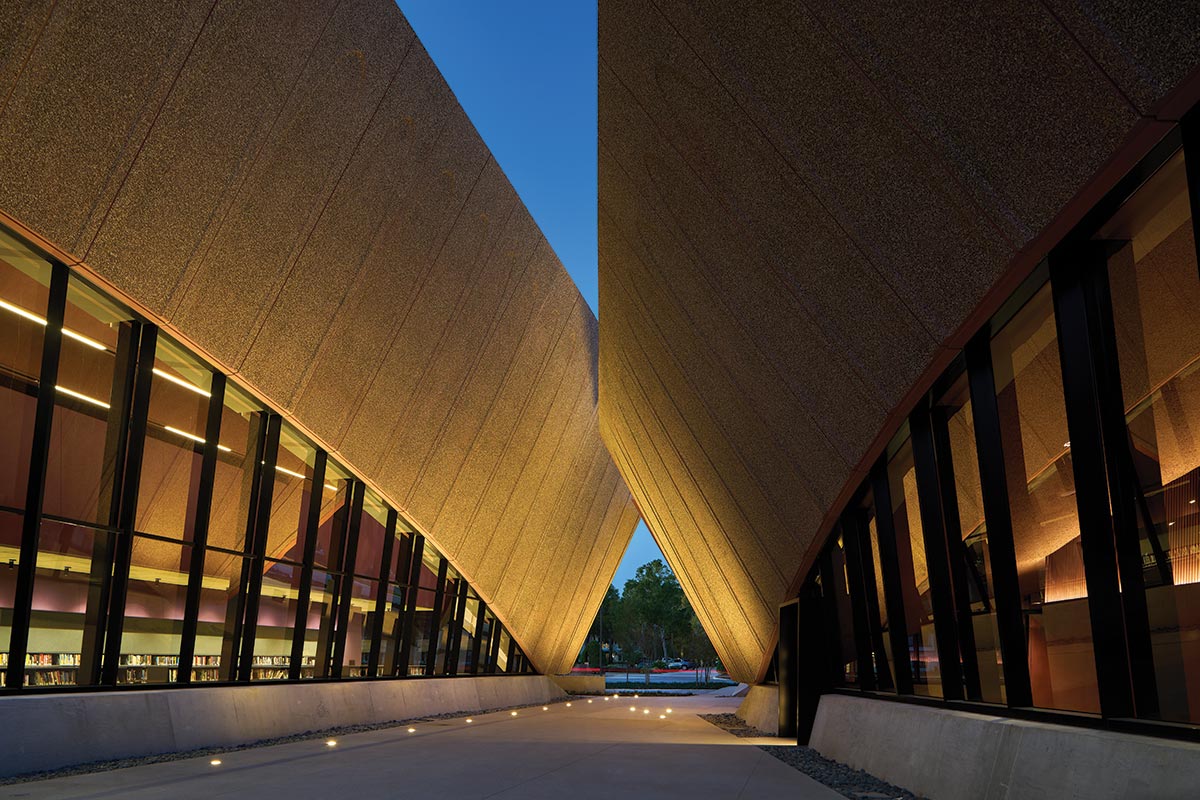 The facades cant outward, giving the complex the appearance of three inverted mastabas of varying sizes. Their massing recalls the three tiers of the National Museum of African American History and Culture, designed by David Adjaye as part of the Freelon Adjaye Bond/SmithGroup partnership. In Winter Park, the arches carved from the outward-sloping facades impart a graceful loftiness to the structures. They also serve environmental and cultural roles; Adjaye was inspired by the climate responsiveness of Florida’s Spanish Revival arcades and loggias, but substituted overhanging walls to shade the large arched openings. The result is interior spaces filled with indirect light and verdant vistas. The architect cites other local sources that informed the design, such as the Sarasota houses of Paul Rudolph and the Lakeland campus of Florida Southern University by Frank Lloyd Wright, which also modeled innovative ways of moderating intense sunlight. 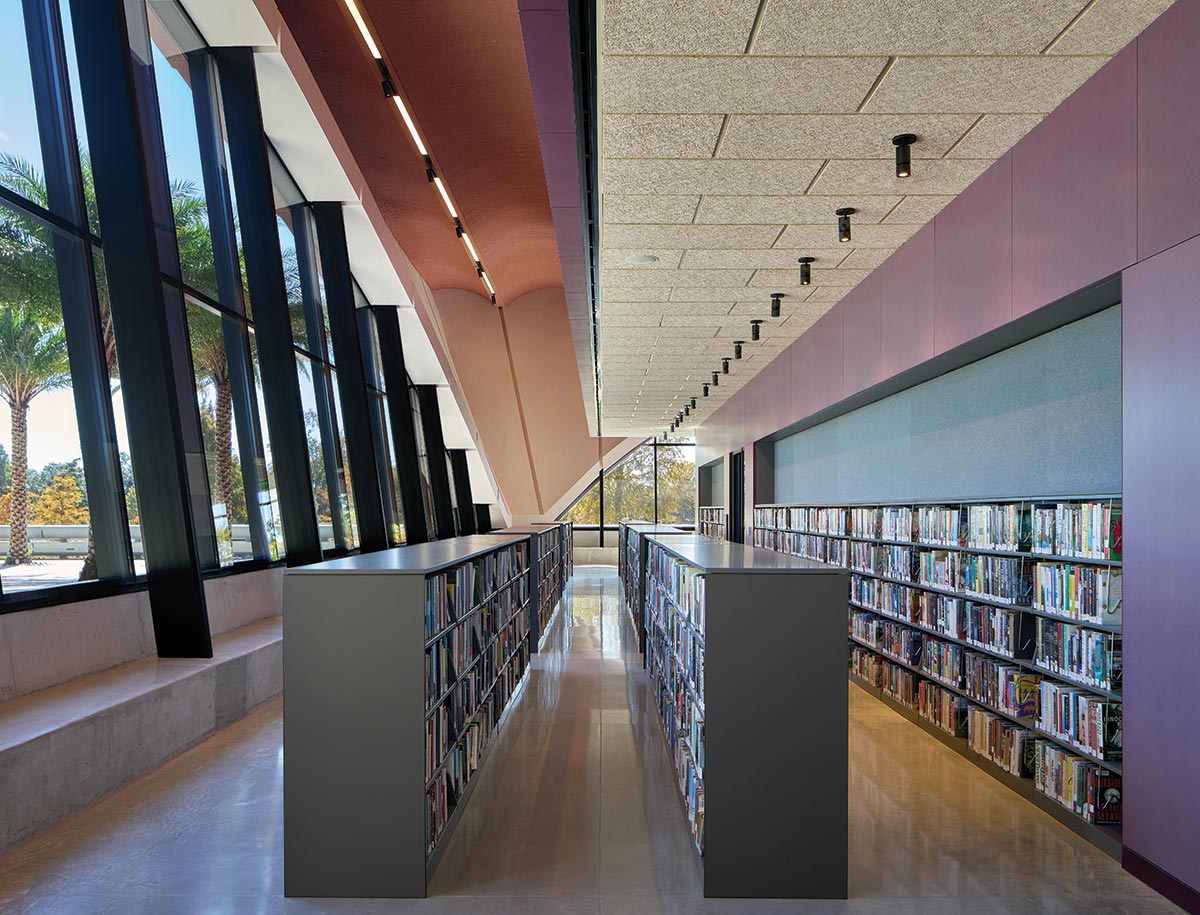 Inside the library, the stacks along the periphery are flooded with daylight. Photo © Dror Baldinger

The quality of light inside the library creates a delightful atmosphere for reading, and patrons take advantage of the informal seating along an interior concrete ledge—thoughtfully furnished with cushions—underneath the grand windows. The building also includes a number of spaces dedicated to nonbibliophilic uses, including a lecture hall, makerspaces, collaborative workrooms, and a computer lab. This mix of functions is increasingly common in new libraries, but Adjaye cites it as vindication of the programmatic diversity of his Idea Stores in London (2003–05), which similarly combined community and technological resources with conventional library services. Each library is “a marketplace of knowledge,” Adjaye says, in which “market stalls” of different programs are arranged in legible configurations. He notes other links between Winter Park and his earlier library projects too, such as the Francis A. Gregory Library and the William O. Lockridge/Bellevue Library, both in Washington, D.C. Like the Idea Store Whitechapel, the Florida project locates its communal spaces around the peripheries of the buildings, and its vertical circulation in their cores. In Winter Park, those cores are centered on monumental circular stairs which add sculptural and experiential richness to the structures. 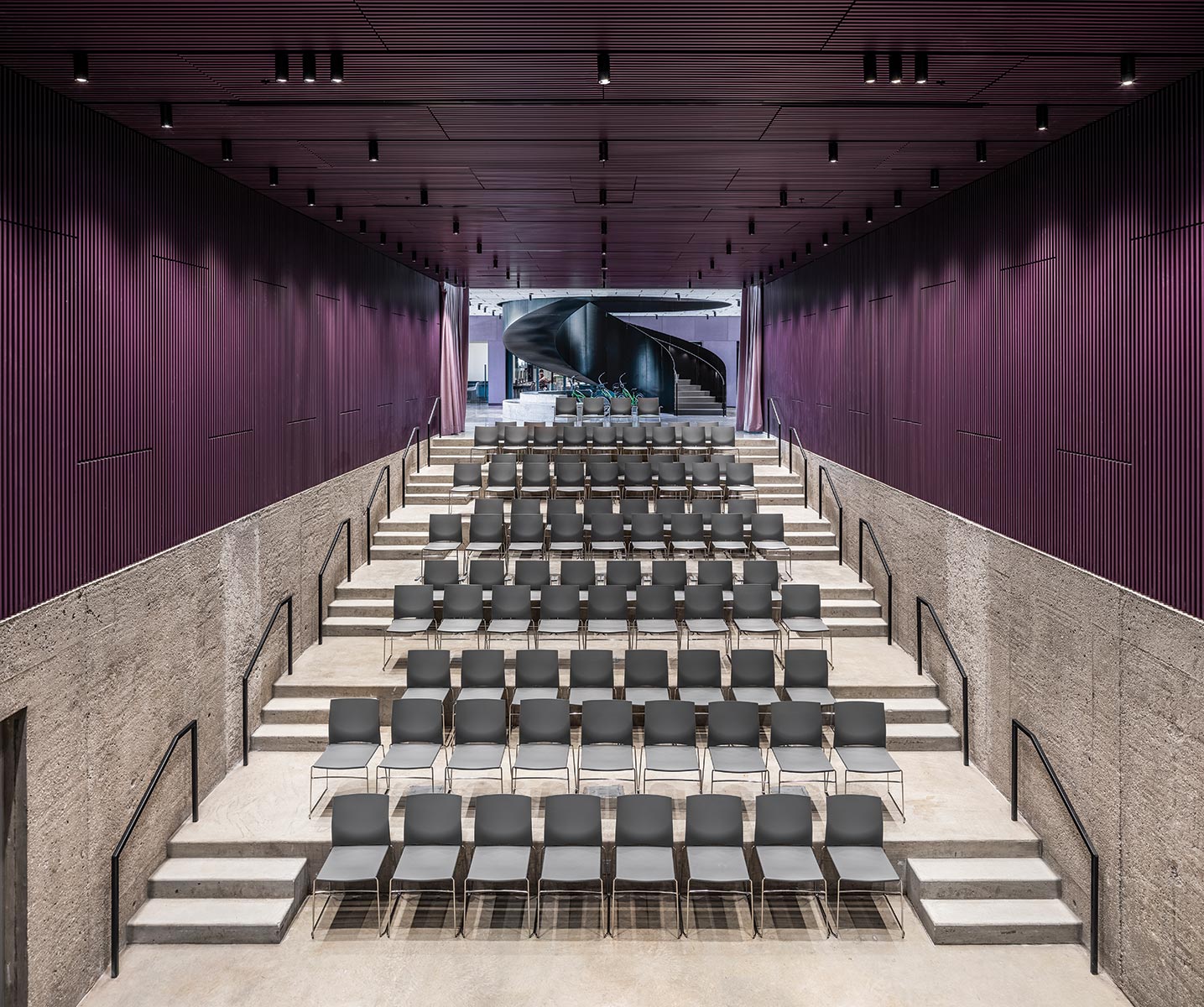 The back of the library’s auditorium opens to the grand staircase at the building’s core. Photo © Chad Baumer

The third element in the complex is a porte-cochère that unifies the tripartite composition formally and announces another theme of the project: the playful use of contrasting ceiling types. In the porte-cochère, the canopy appears like a pendentive dome carved out of the structure’s mass, while the two-story volumes of the library and event center are capped with parallel barrel vaults and a flat ceiling, respectively. An eccentric oculus cut through the porte-cochère roof (a stereotomic device Adjaye explored previously in a temporary entrance pavilion at Design Miami in 2011) has a perfectly centered analogue in the ceiling above the library’s circular stair. This theme of contrasting elements extends to the color palette of the three buildings, which employ varying hues and sheens of pink, brown, and black. This care for detail produces lovely experiences that reward sustained and repeated visits to the complex. 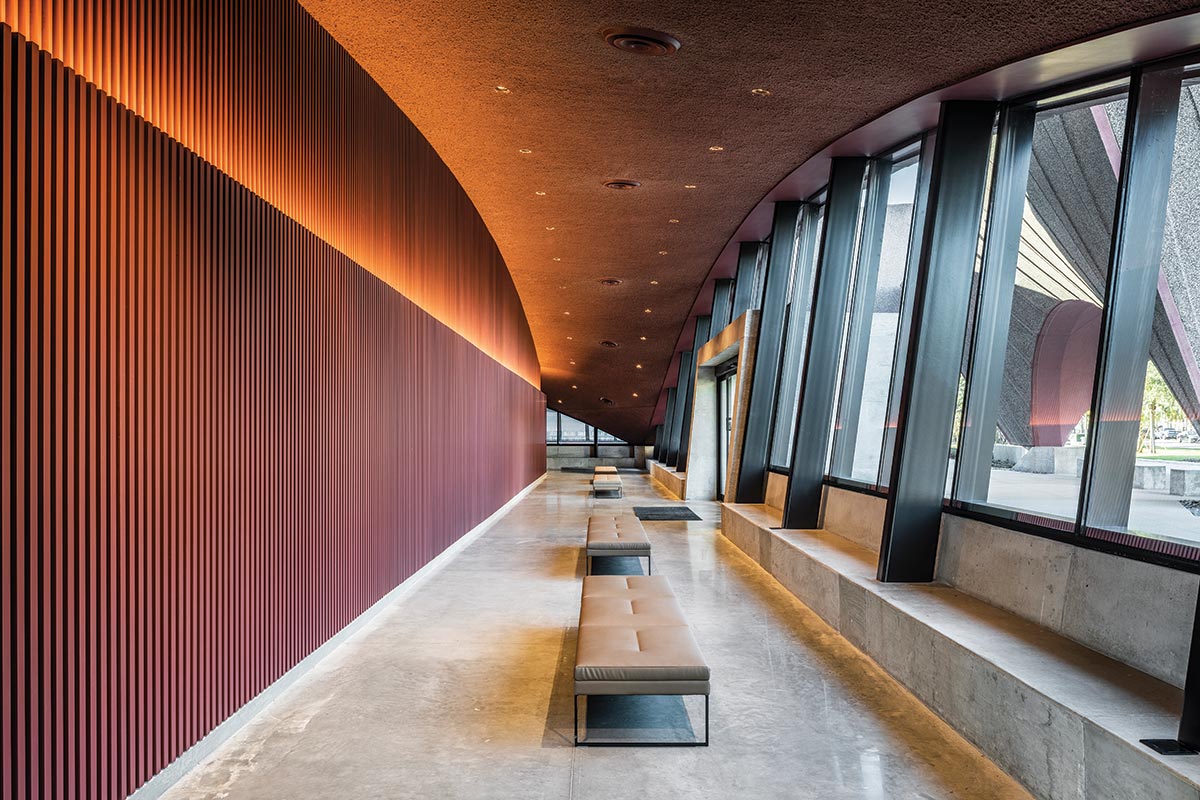 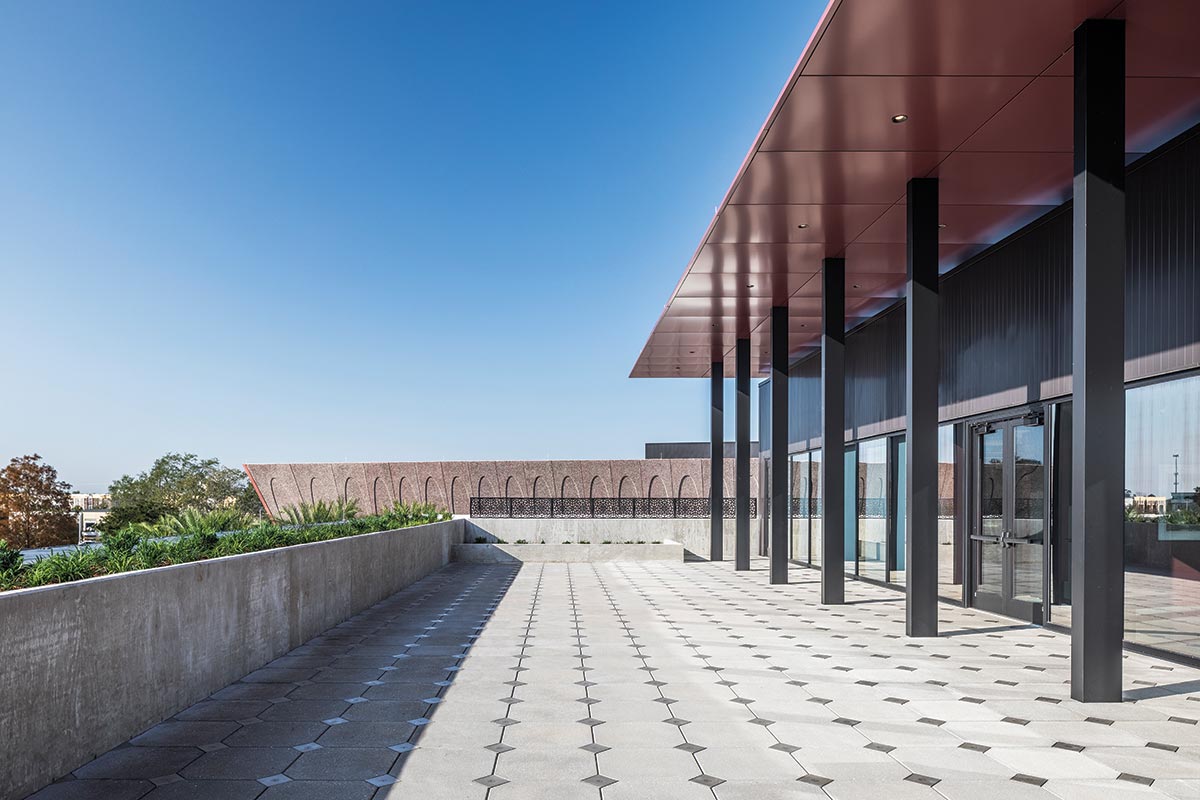 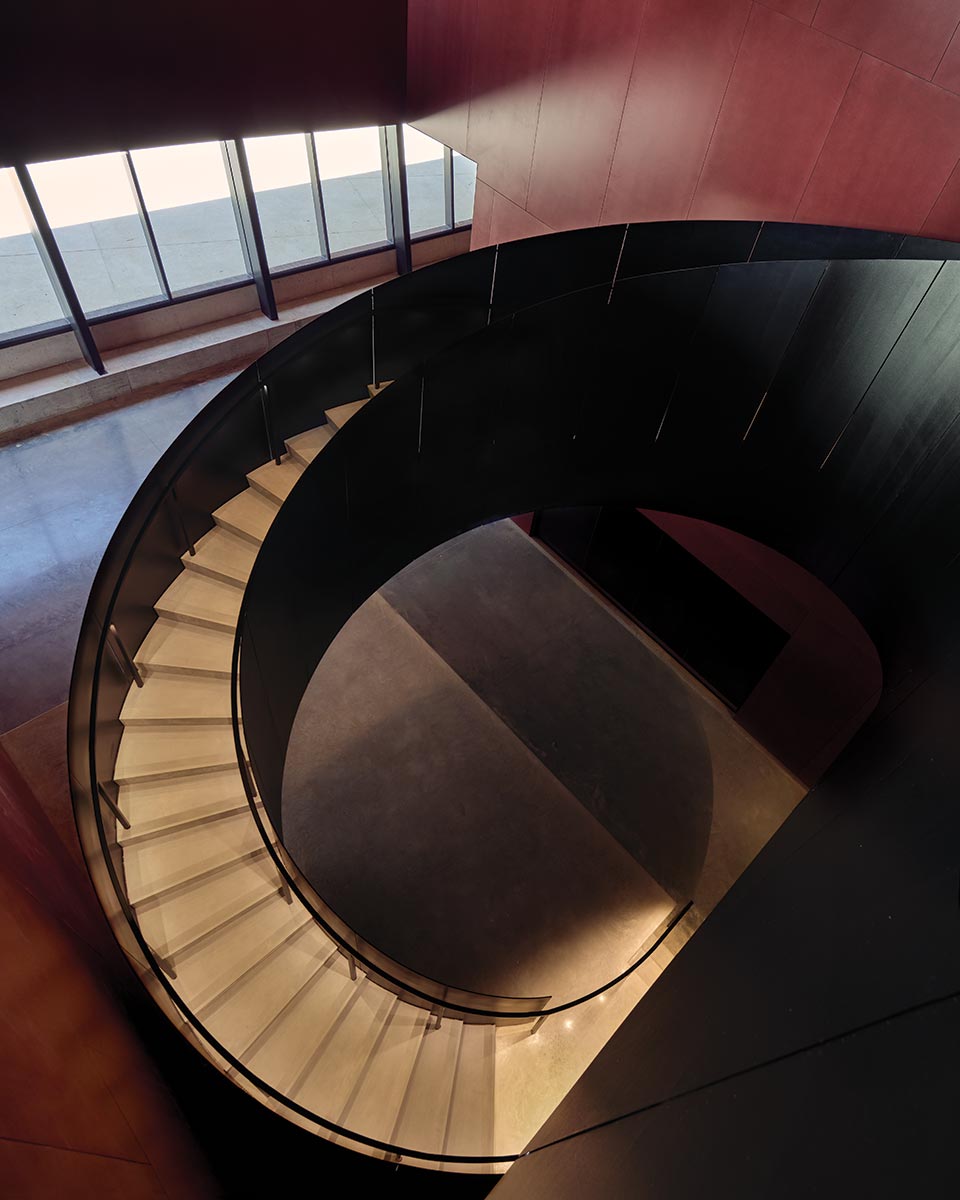 There are some missteps in the project. Adjaye’s respect for context includes accommodating Florida’s relentlessly suburban planning ethos, resulting in an entry sequence that privileges drivers over pedestrians. Requiring visitors to enter through a parking lot is a very Florida way to organize things, and not in a good way. And at the risk of sounding nitpicky, one (very big) construction detail strikes a discordant note in this otherwise elegantly detailed symphony: the precast-concrete panels that comprise the exterior walls overlap in butt joints at the buildings’ corners, revealing edges tinted in a tone alarmingly different from the rest of the facade. It’s a little weird. 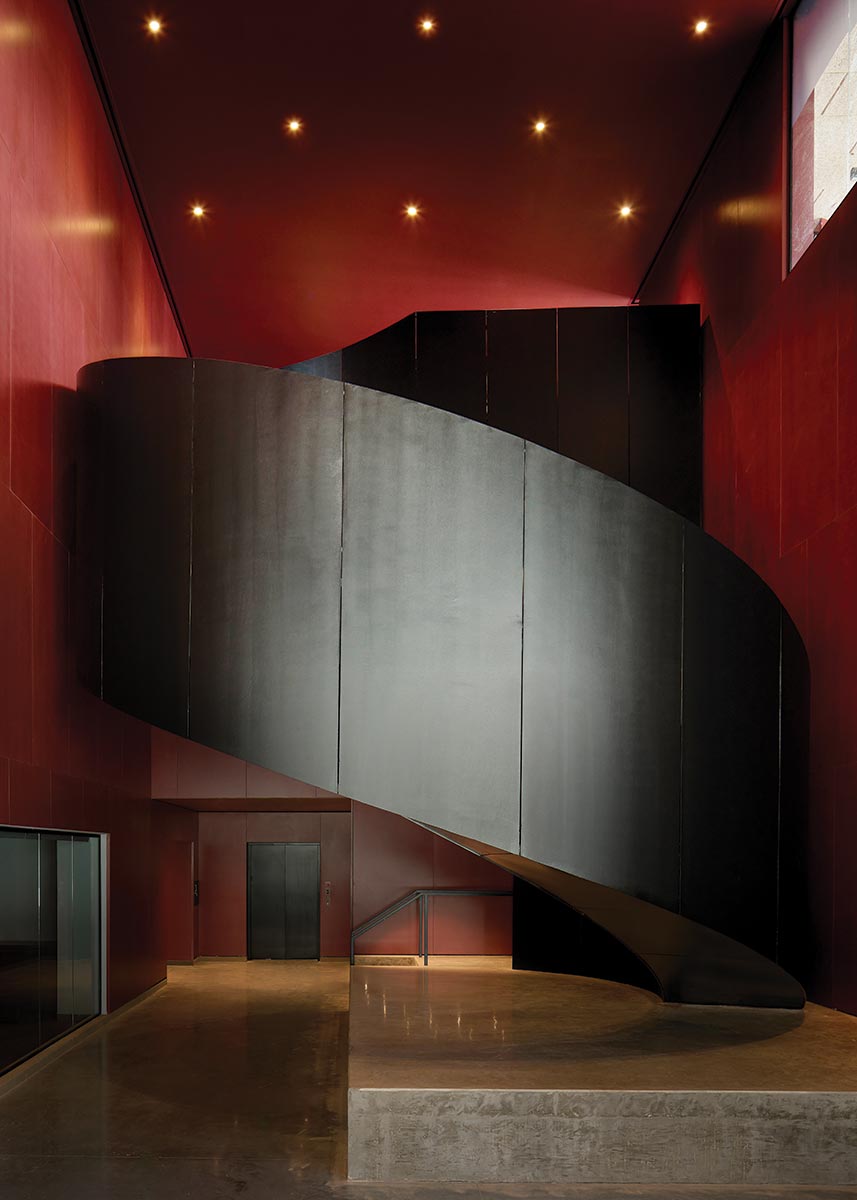 But, as noted, good civic architecture in Florida is an accomplishment, and the Winter Park Library is very good. Since opening last December, the project has received broad popular approval. One of its most supportive constituencies is the African American community that is concentrated around the library, which is located—quite literally—across the train tracks from the wealthier and predominantly white side of town. It is no small matter in this segregated city that the designer of its new civic monument is a Black architect of international stature, and Adjaye embraces this role. “I imagined it for ‘that kid,’ ” Adjaye said, “to inspire them to think about the world.” It’s why the project “had to perform at the level that gives joy.” 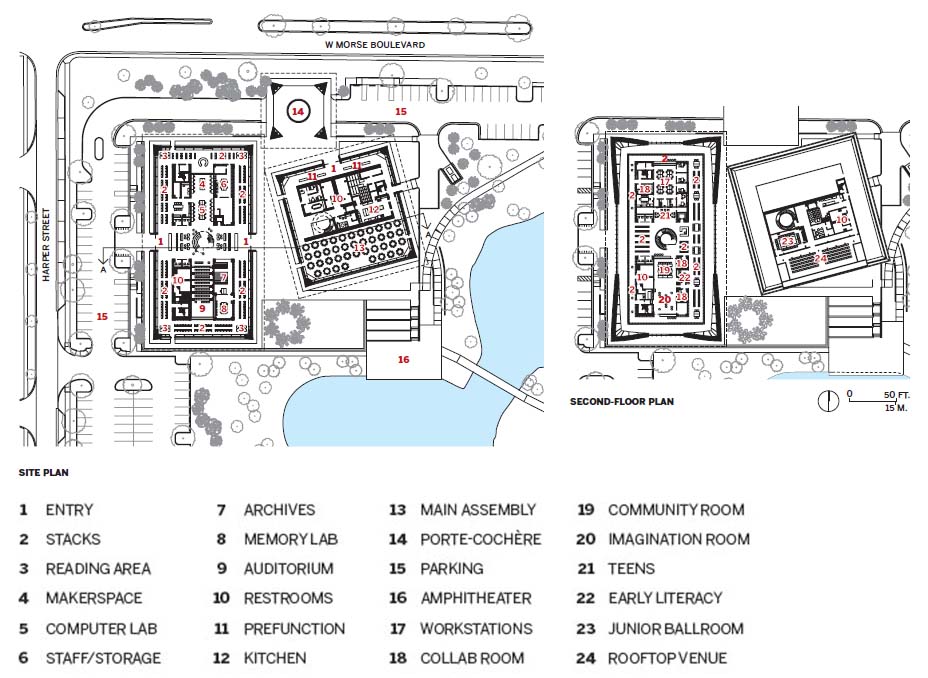 Review of 'The Routledge Companion to Italian Fascist Architecture: Reception and Legacy'