Throughout the 17 days of the 2022 Beijing Olympics, social media around the world buzzed not only with news of events and medals, but also with images of China’s curious array of new and repurposed competition venues. The Big Air Shougang ski slope in particular became something of a meme as images of skiers performing eye-catching tricks mid-air against a cyberpunk industrial backdrop went viral. In the years since the Bird’s Nest and Water Cube were built for the 2008 summer Olympics in Beijing, China’s approach to international sports—and to public architecture—evidently has shifted in major ways.

Located on the western outskirts of Beijing, Shougang (or, State Capital Steel) is only a half hour away from the urban center by public transit. The site’s history is intertwined with China’s two Olympics as well as with broader urban development in the capital. Established in 1919, Shougang was one of China’s first steel mills, at its peak producing 10 million tons of iron and steel per year. But following the selection of Beijing to host the 2008 Olympics, and recognizing the need to improve the city’s famously poor air quality, officials gradually relocated steelmaking away from Shougang and fully shuttered the plant in 2010. 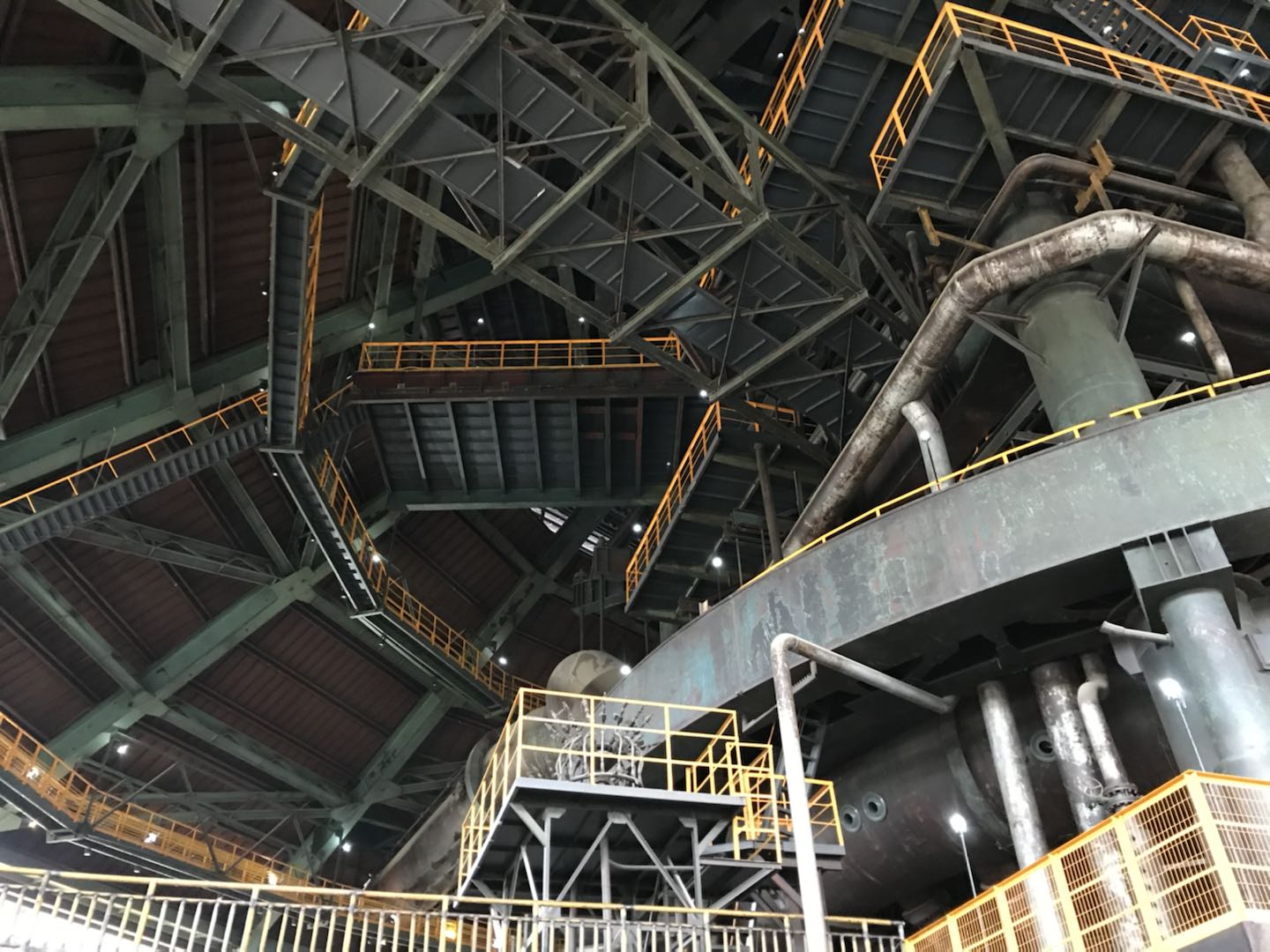 In the past, Chinese authorities have opted to raze former industrial sites and redevelop from scratch. But at Shougang, planners looked instead to such successful industrial regeneration projects as the Zollverein Coal Mine Industrial Complex in Essen, Germany. Undertaking that at Shougang was anything but simple, given the site’s enormous scale. Could planners attract people to make full use of the 3.3-square-mile complex—and not just as a tourist attraction? The answer lay in creating multiple programs for working, living, and recreation, transforming Shougang into a lively urban environment without losing its industrial flavor. Beijing’s selection as the winter Olympics host accelerated the process; in 2017, the event’s organizing committee moved its headquarters into converted iron ore storage towers on the site. Subsequent projects added sports and cultural venues, including the big air slope.

At 200 feet in height and boasting a 538-foot ramp, Big Air Shougang is the world’s first permanent venue for big air skiing (and was the first winter Olympics venue integrated into an industrial heritage site). Big air events previously have been held on temporary structures in city centers to attract urban followers, such as the 105-foot big air jump built on the banks of the River Thames in London in 2010, or the 138-foot jump built inside Fenway Park in Boston in 2016.

Choosing Shougang for the Olympics took into account its future potential use, to avoid the common problem of former Olympics venues lying vacant once the games are over. In China, of the 12 new stadiums built for the 2008 Olympics, few were effectively reused until the 2022 Games. Even the iconic Bird’s Nest, which required 42,000 tons of steel to build, has sat largely empty for years. Thus, planners sought to integrate new construction for last month’s Olympics into long-term development plans—with  Big Air Shougang intended to help popularize snow sports in China in the years to come.

A design sketch showing the new Shougang skyline with the four existing cooling towers and the big air slope complementing each other. Image © The Architectural Journal

Designed by Brian Li Zhang and his Beijing-based Office TeamMinus, Big Air Shougang respects the history of the site but forms a new skyline with the four repurposed cooling towers and the slope playing off each. Triangular in shape, it consists of the lift, the in-run and the landing, which are designed to be adjustable to fit the future needs of post-Olympic competitions. “Big Air Shougang can continue to hold various ski competitions and trainings, while the landing and the finishing area can be repurposed temporarily for different extreme sports,” Zhang told the Southern Metropolis Daily. “Visitors can use the staircases on both sides of the slope to enjoy the scenery.”

For Zhang, Big Air Shougang reflects an interest in inserting new public activities and programs into an existing site, an attitude that reflects a shift in the thinking of leading Chinese architects and planners, as they grapple with the deindustrialization of China’s “rust belt” to the west of Beijing.

When I visited Shougang Park several months before the games, it had already become a public space popular with locals. The repurposed blast furnace accommodated an art exhibition, while Qunming Lake, the previous source of water for industrial production adjacent to the big air slope, is surrounded by a walking path. And Shougang has become a model of post-industrial development: for the next winter games, in 2026 in Milan, a former railyard is being redeveloped as an Olympic village.

Jingqiu Zhang is an architect and the founder of IA x RA in Beijing. She has written and interviewed for Arch-Position and World Architecture, among other publications, and she translated the books New Urban Suburbanization and The Theatre of Bauhaus.