When architect Thom Mayne first tried to design a new house for himself and his wife, Blythe Alison-Mayne, he was stumped. The problem seemed to be the site, a sloped 9,570-square-foot corner lot in L.A.’s verdant Cheviot Hills, where imposing five-bedroom houses are common. “We’re both uncomfortable with ostentation,” explains Alison-Mayne. “I knew he didn’t want some big, muscular building up on a hill that said, ‘Hi, I’m Thom Mayne!’ ”

But then he figured it out.

His solution—the radical opposite of a McMansion—inverted the topography with excavations to create a lush private “canyon.” Within that quasi-wild landscape, he inserted highly experiential architecture, impossible to take in as a single object, mostly hidden from the street, potentially wide open to the outdoors—and with just one sleeping area (not counting the autonomous two-bedroom guest wing). 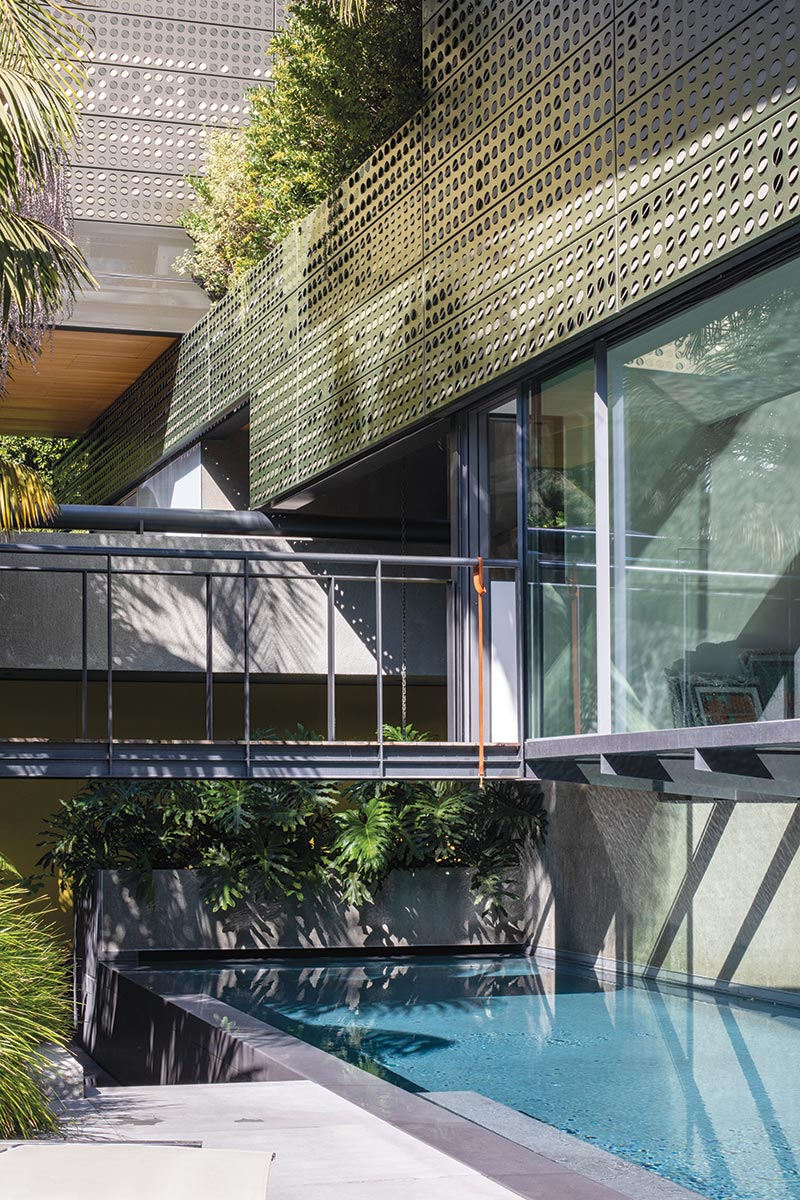 The guest wing and bridge to the main house overlook the pool. Photo © Jasmine Park, click to enlarge.

Nestled amid hedges, with palms and local flora visible deeper in the site, the front gate is weathering-steel plate, with calligraphically rhythmic semilegible text laser-cut, stencil-like, into it. A small sign, with a full transcript, identifies it as a passage by science fiction author Ray Bradbury, whose longtime home stood here—a run-of-the-mill house that Mayne demolished, with a promise to honor the late writer.

To one side, the cantilevered guest wing is visible above the hidden carport. It is screened in olive-toned metal panels, gridded with 2-inch holes that still bear the cut-out material within them, tilted at various angles, like sequins, or hanging chads. The entry path continues down shady steps and across a footbridge, spanning the ravine—contoured to let sunlight reach the “jungle” floor, 13 feet below grade. 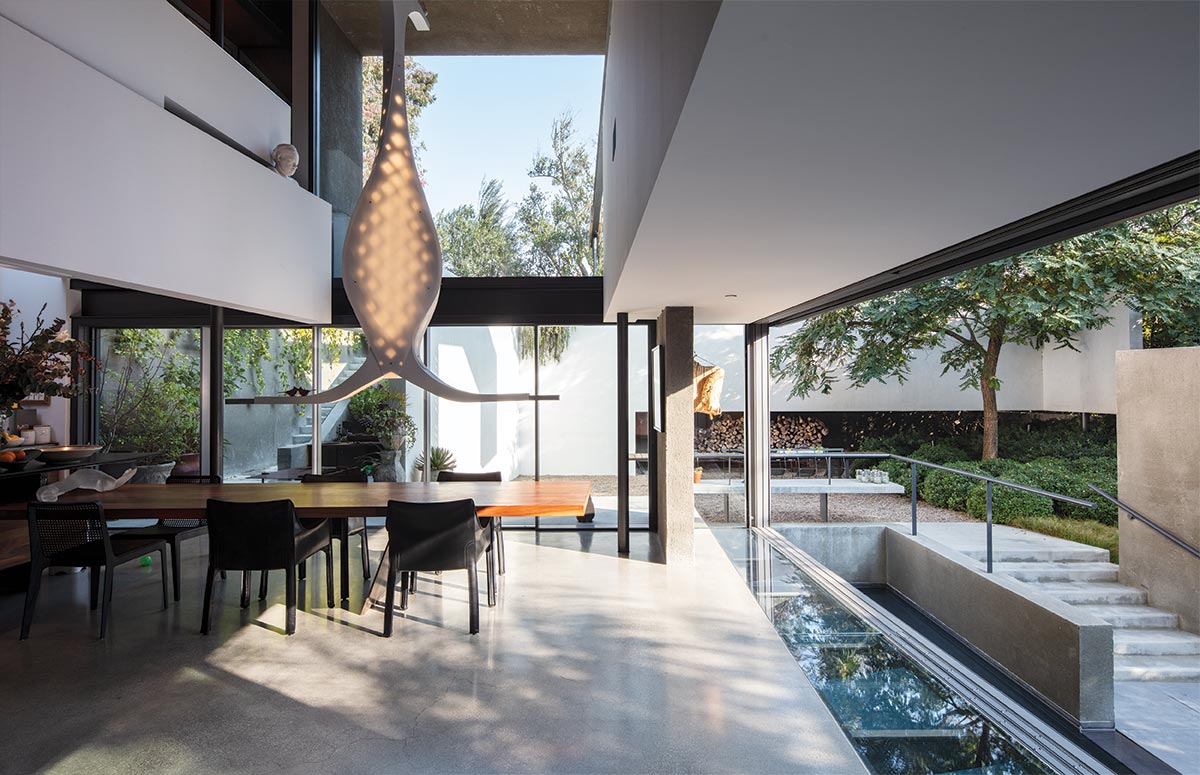 The edges of the dining room (1) and the living area (2) cantilever over the water. Photos © Jasmine Park 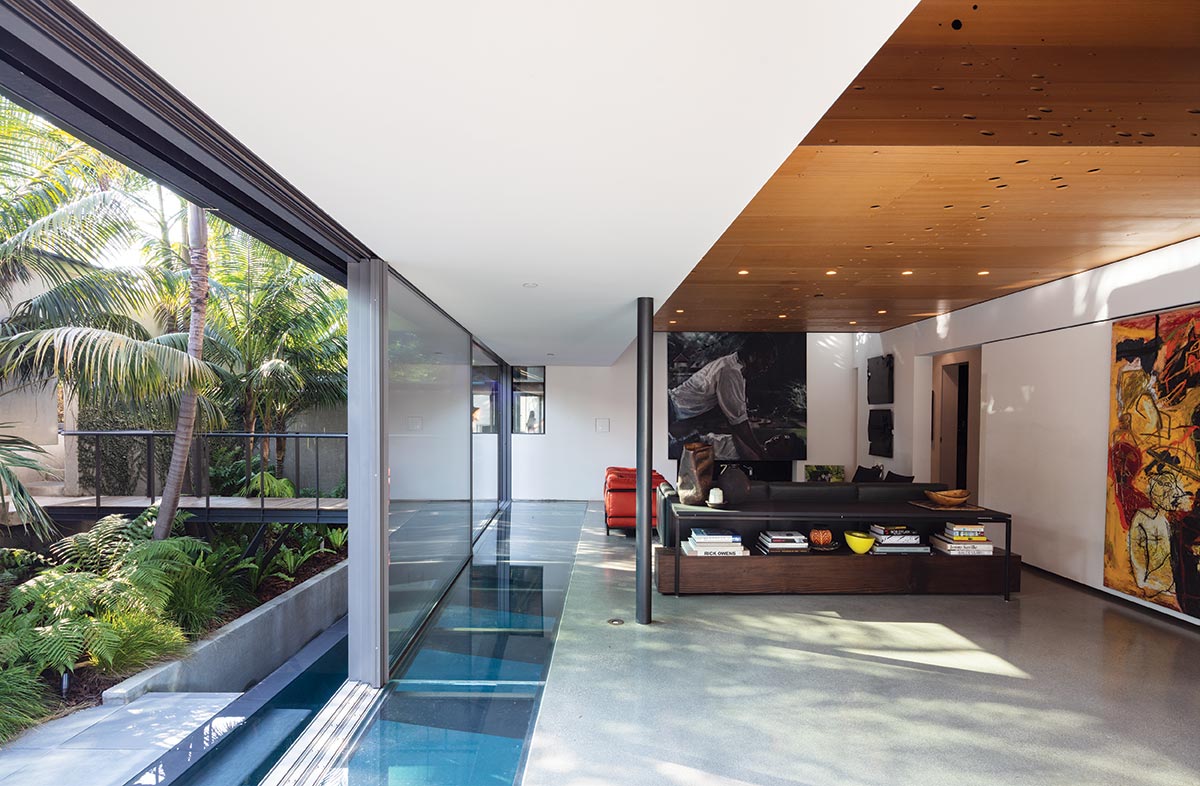 From the bridge, the house finally appears, with a lap pool in the foreground, alongside the living/dining area above it. Here, the glass-paneled facade can slide wide open—merging indoors and out. (The front “door” is simply one of those panels.) The interior’s exposed-concrete floor has a wide glass-with-steel border, cantilevered over the water, projecting wavy reflections across the ceiling. The design—with its transparent rectilinear forms, cantilevers, and compositionally prominent pool—shares DNA with Case Study House #22, by Pierre Koenig, who taught Mayne at the University of Southern California. (For more on that house, see the review of The Stahl House: Case Study House #22: The Making of a Modernist Icon, page 44.) 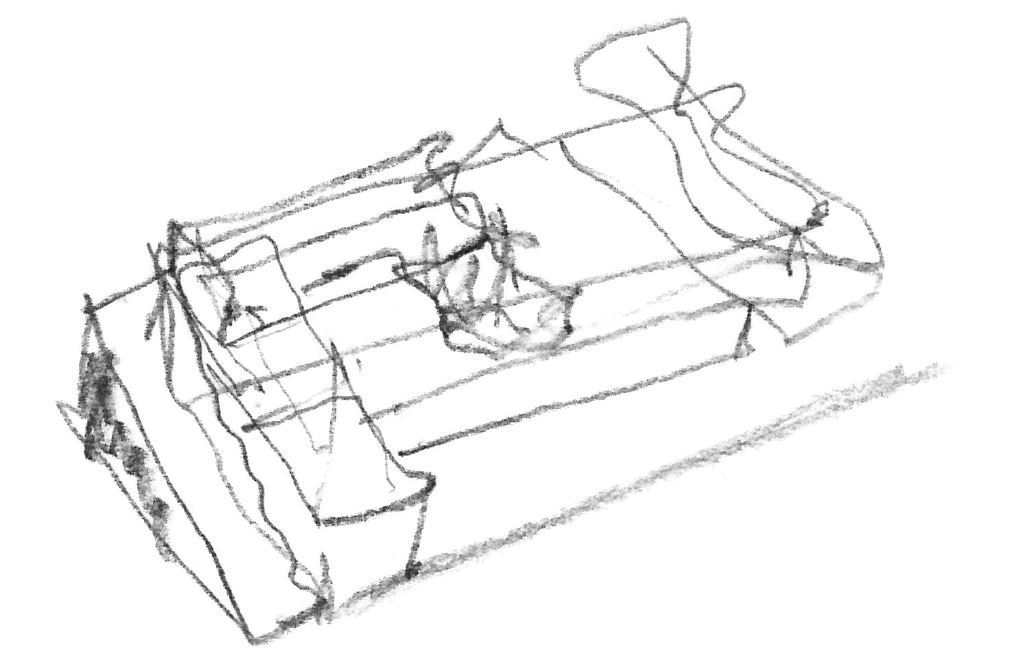 The concept sketch by Mayne (3), shows how the house embraces the lap pool (4). Photo © Jasmine Park (1) 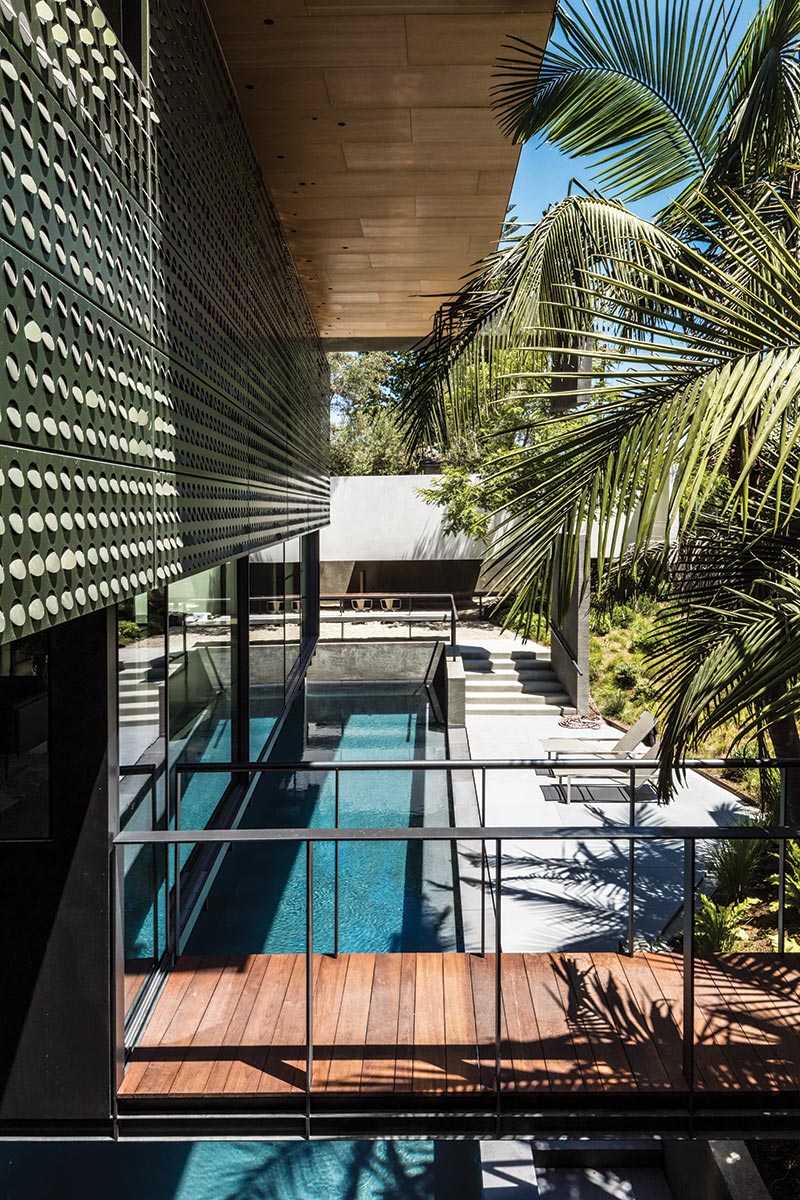 As in Midcentury Modernism, the Alison-Mayne House is fluid and open in plan. Except in its “hotel” wing—where the couple hosts their offspring and out-of-town friends—the house’s only conventional opaque door is to a guest bathroom.

Even their sleeping area is a low-walled loft, overlooking the living/dining/kitchen space. With five partial levels inside and four terrace heights outside—plus perpendicular wall planes that pass one another without meeting—the house is sectionally complex, with oblique views between spaces, and daylight entering from multiple sources, including semi-hidden skylights. 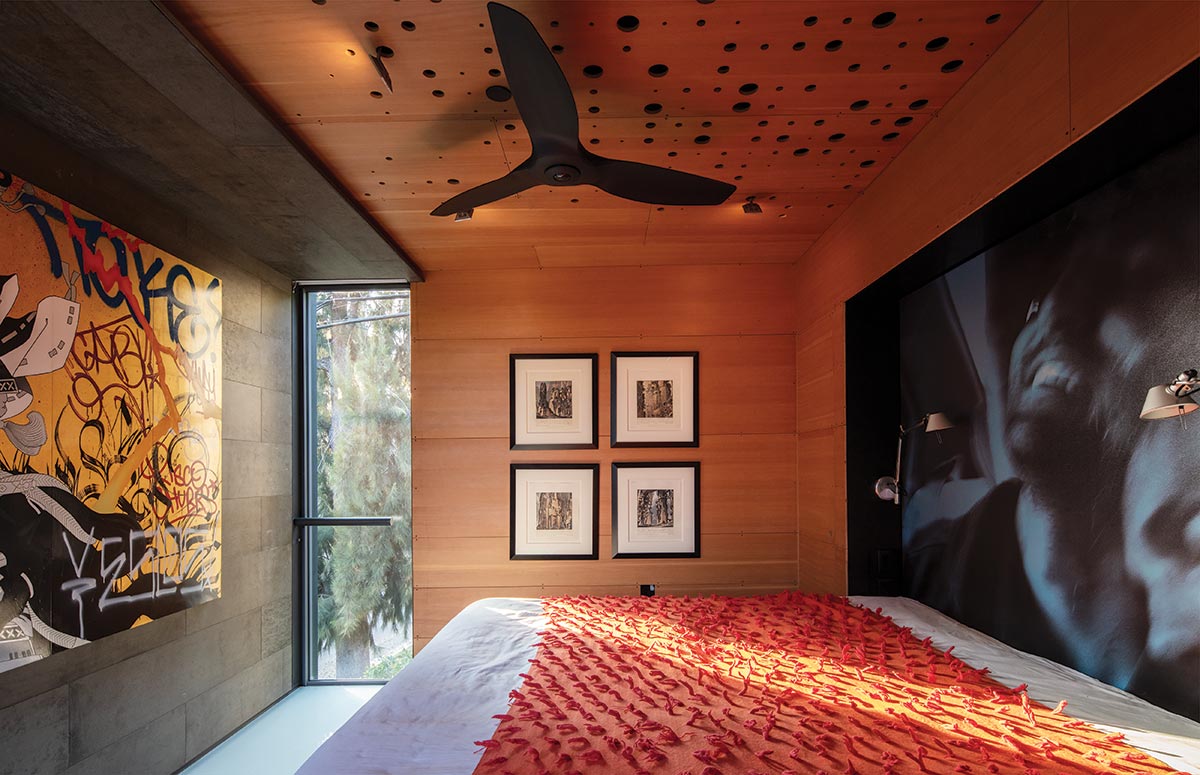 In the guest wing, a bedroom has Douglas fir-paneled walls. Photo © Jasmine Park

The design draws on different parts of Mayne’s—and L.A.’s—architectural evolution, as well his family’s personal experiences. Among the integrated relics, the “hole-punched” metal sheathing is the identical aluminum rainscreen—with the same iridescent, infrared-deflective (and therefore cooling) coating—that Mayne and Morphosis created in 2017 for the Bloomberg Center on Roosevelt Island, New York.

Meanwhile, adjoining the sleeping loft, an outdoor shower surrounded by tropical foliage evokes both Akumal, Mexico, a favorite family vacation spot, and the free-spirited showering arrangements of previous Alison-Mayne homes. The couple also imported their ritual of long talks during her bath—here, with a sculptural seating niche beside her freestanding soaking tub, which is also open to the outdoors. 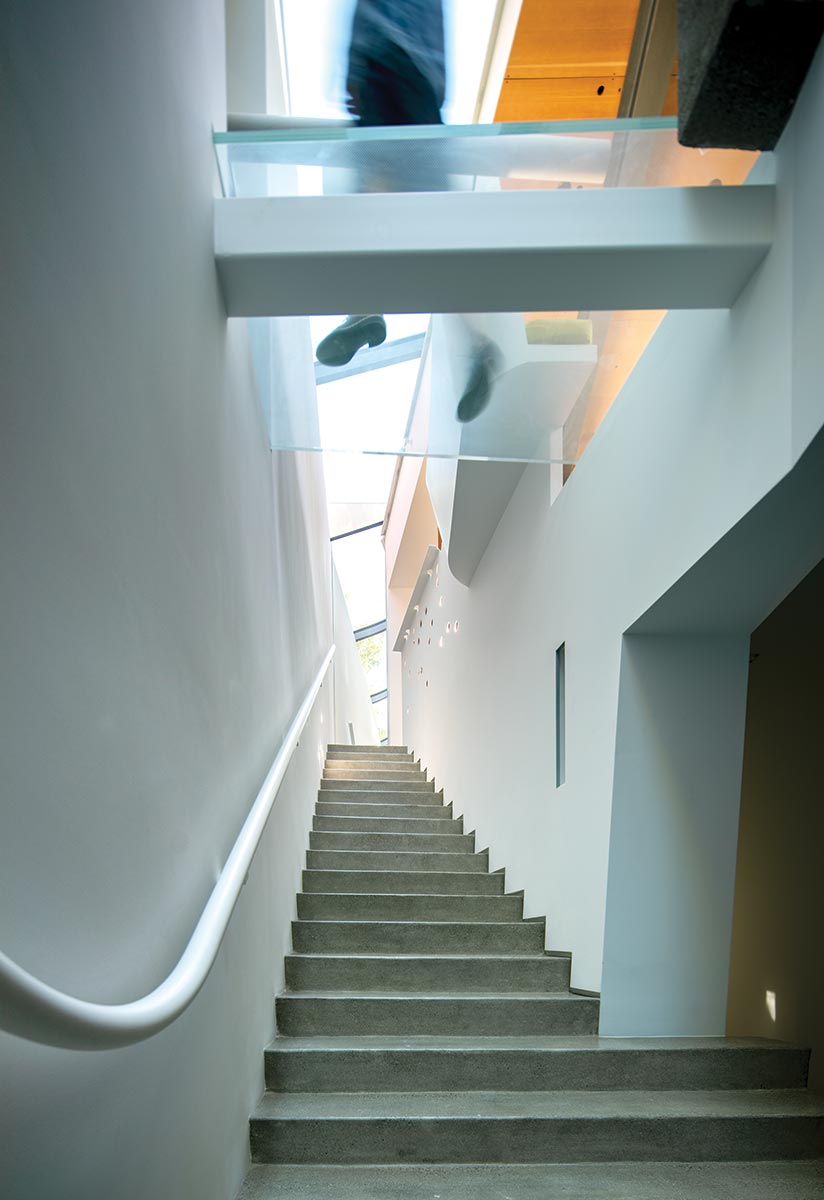 The stair leads to the second-level sleeping area and garden. Photo © Jasmine Park

This is the first house Mayne designed in more than two decades—and the first from scratch for his own family. For 33 years, they lived in nearby Santa Monica on a tight site in a modest existing bungalow that he’d transformed on the interior, combining compact living quarters with soaring ceilings. Like the latest house, it had an entry bridge and a carved-out descent into a private realm—all surrounded by dense landscaping.

But allusions to earlier buildings are not the new house’s only “collections”—it also contains many artworks and artifacts, some from the couple’s travels, as well as their grown sons’ childhood paintings, Mayne’s sculptures and architectural drawings, and pieces by friends and colleagues, some well known. For the living room, the architect designed a diminutive “fireplace” on legs, a whimsical cross between a TV and a hearth that plays a video of crackling flames. The coffee table beside it, a gift from artist Do Ho Suh, incorporates thousands of little plastic soldiers, holding up the thick clear-glass top. Mayne also created the large, translucent, squidlike pendant lamp—CNC-fabricated from solid-surface acrylic resin—over the long dining table. 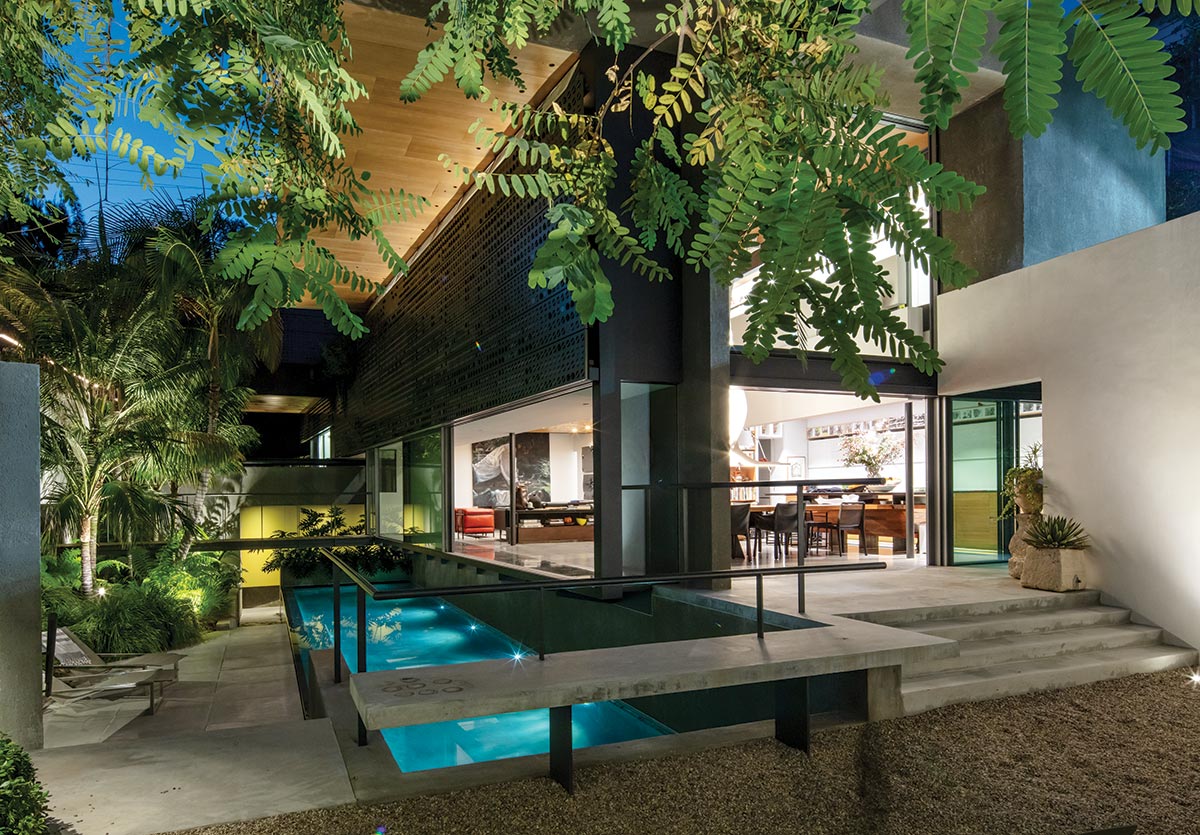 The living and dining areas, while glazed, are visible only from the interior garden and terrace (5) on the south and east sides of the swimming pool (6). Photo © Jasmine Park 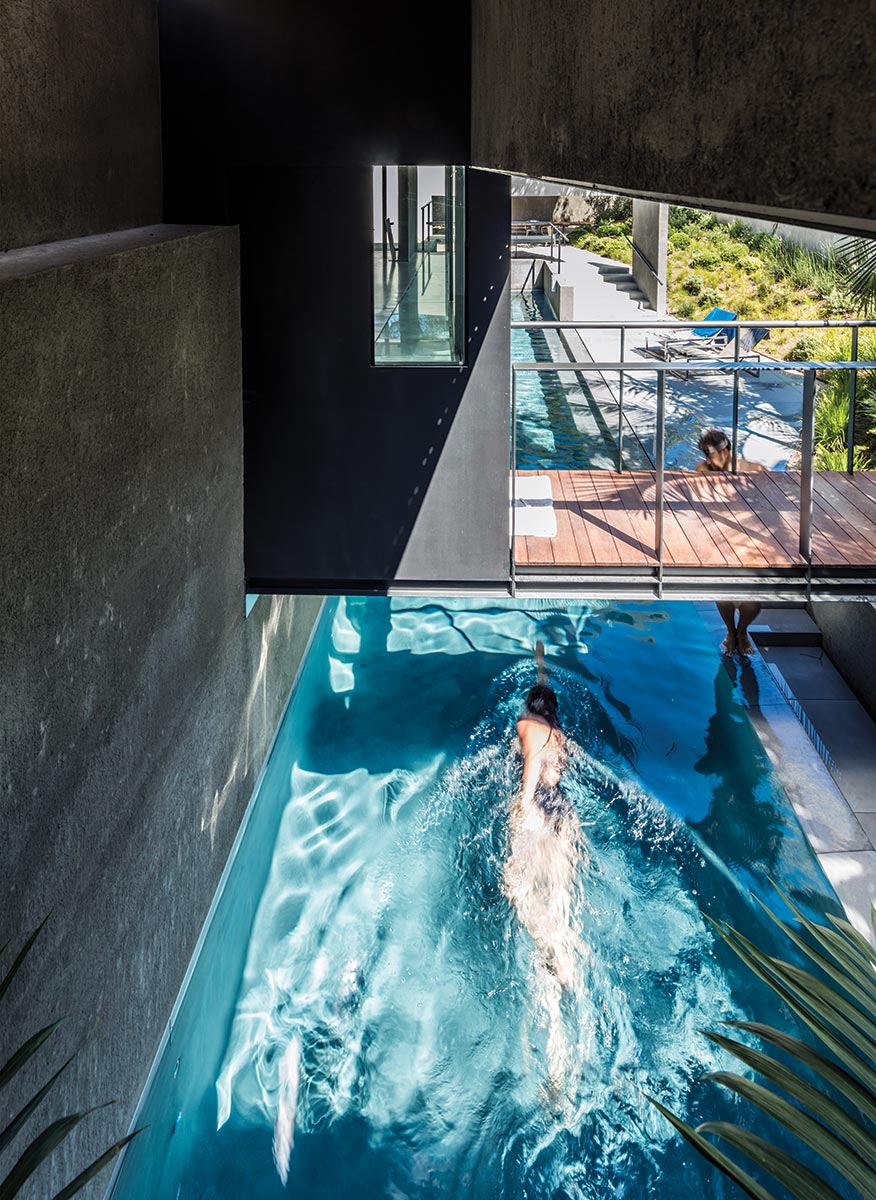 While extremely spacious and airy, this 1,800-square-foot house (excluding its 825-square-foot guest wing) is barely bigger than its compact predecessor in Santa Monica—a decision key to the sustainability strategy. Rather than max out the lot, Mayne filled only 16 percent of the allowable above-grade envelope (even below street level, the house is much smaller than its neighbors).

With no conventional air conditioning, the entirety relies on cross ventilation, deep overhangs, the megaperforated screens, and consistent coolness (at 56 degrees Fahrenheit) of the deep, excavated ground. With rooftop photovoltaic panels, rain- and bathwater capture for garden irrigation, and hydroponic radiant heating and cooling, the house operates with water and energy efficiency.

Meanwhile, the building’s quasi-disappearing act is a local curiosity. “My favorite elevation is just one beam,” says Mayne. “We joke that the architecture enthusiasts who peek through the hedge get to see almost nothing—it’s that private.”

The couple often invites in puzzled neighbors, and many end up wishing they lived that way—without fretting about maximizing per-square-foot resale value, without doors that sequester family members with their personal screens.

As for Ray Bradbury, before Mayne razed his former house, die-hard followers mounted vociferous opposition, drawing national coverage. “Then Thom invited two of the loudest voices to the office and presented our plans with a detailed model,” recalls Alison-Mayne. “By the end, they agreed that Ray—an architecture buff—would have loved the house, even suggesting that ‘God’ had sent us to [create] it here.” 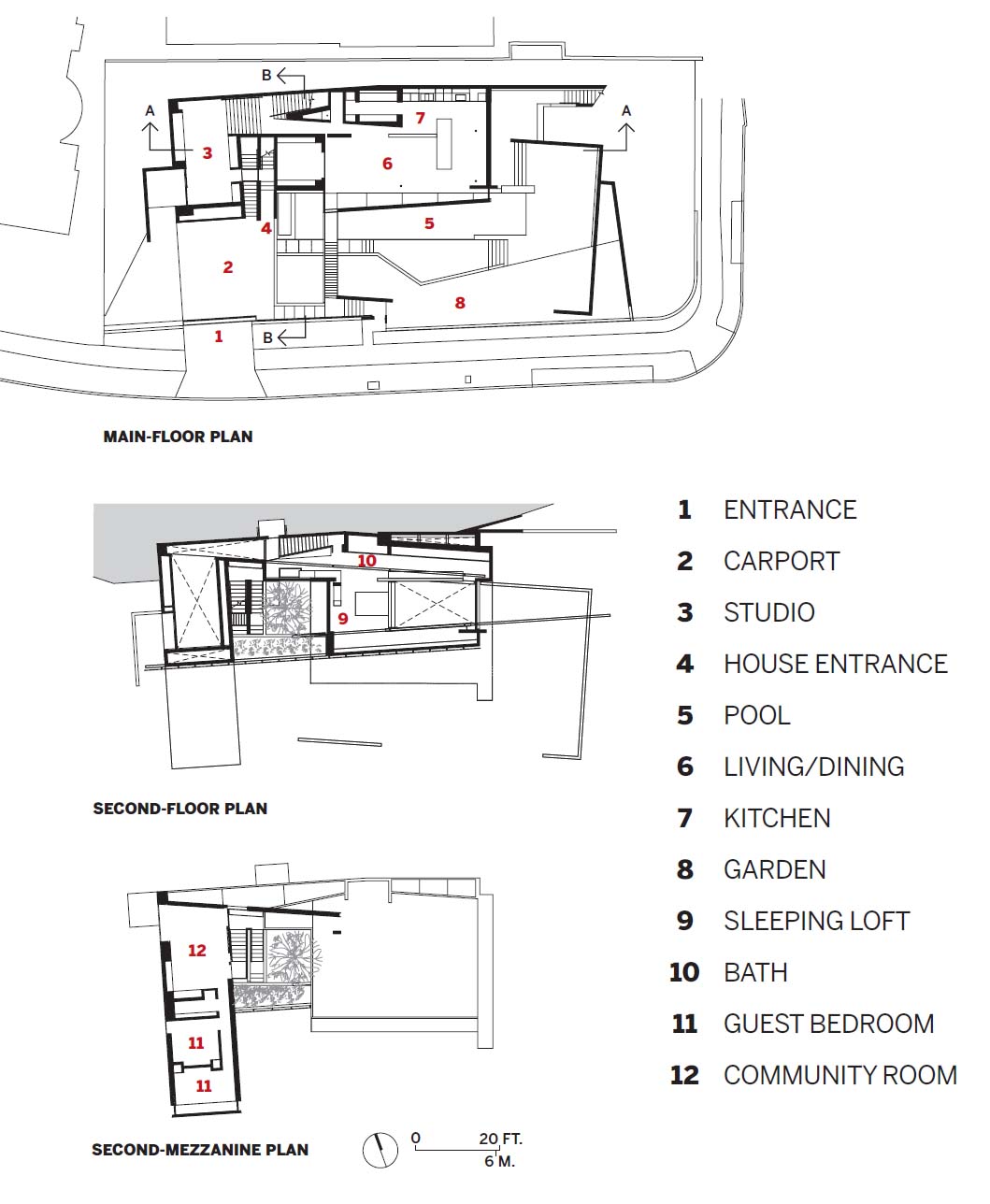 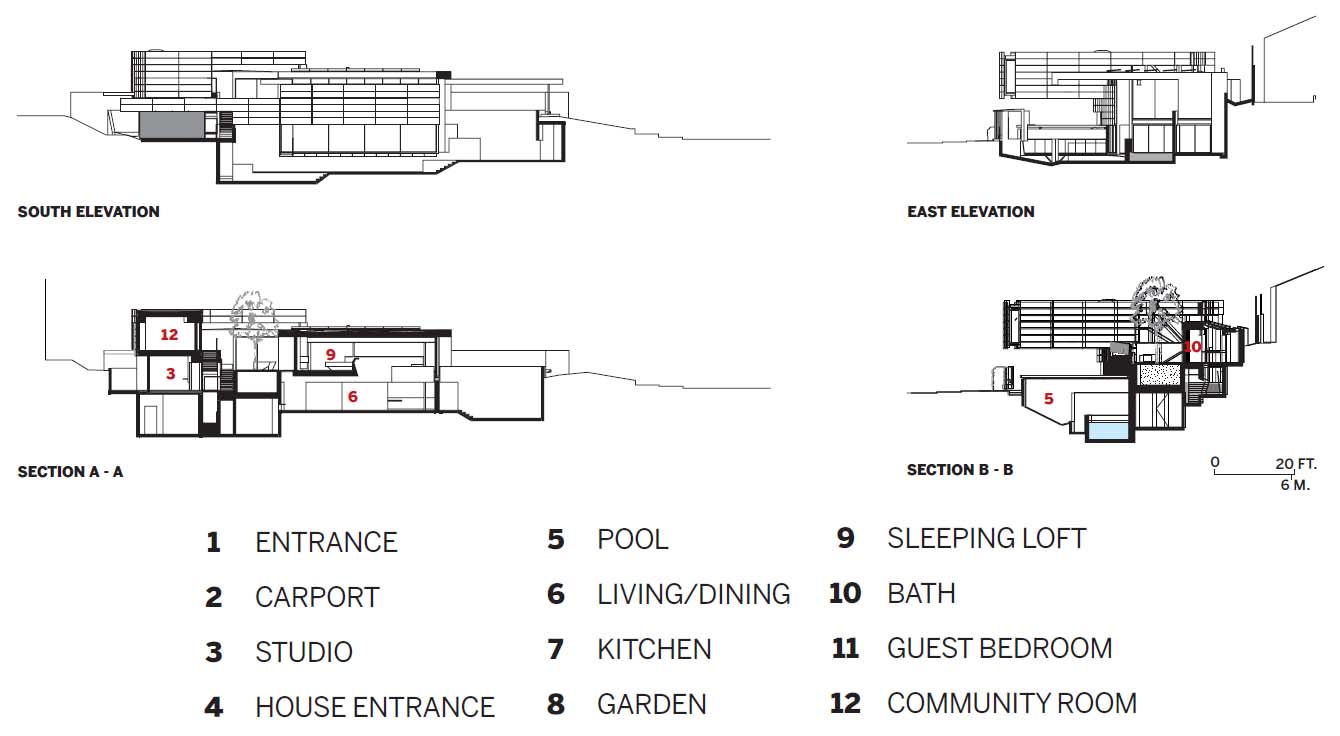