With disruptions and disasters supercharged by climate change now happening more frequently, resiliency—the business of protecting communities from threats, or adapting to them—becomes more urgent. After thousands of square miles of metro Houston were inundated by Hurricane Harvey in 2017, the city and Harris County implemented impressive large-scale and community-enhancing flood-management projects—yet they are not enough, and too often continue to fail the most vulnerable. At the coastal edge of New York, on the other hand, Arverne East has broken ground on a $1 billion mixed-use development that makes transformative leaps in sustainability and resiliency, while enhancing the economic and social viability of a struggling neighborhood.

Houston was particularly susceptible to the torrents that came with Hurricane Harvey—the worst downpour in Texas history, with 60 inches of rain in parts of the state. The city is nearly flat, heavily paved, and has soils that drain poorly: the storm left behind more than 150,000 flooded homes, including 25 percent of the city’s affordable stock, and caused $125 billion in damages. The area famously lacks land-use controls, and, so, over the years unfettered building had occurred in high-risk areas, many of which are low-income enclaves where people have fewer resources to deal with greater damage. The Houston metro area has relied on an extensive bayou network that drains stormwater into Galveston Bay, but the system is no longer up to the task. Houstonians have also recognized the value of enhancing bayou habitats for recreation, along with flood management. After Harvey, the city, working with its nonprofit Parks Board and the Harris County Flood Control District, rushed to complete a Bayou Greenways 2020 initiative—to construct 150 miles of trails and 3,000 acres of parks, habitats, and flood-control enhancements across seven bayous and the West Fork of the San Jacinto River. Though the plan was still 50 miles short of its goal last year, it will eventually put 1.5 million Houstonians within 1.5 miles of a greenway.

Does the initiative equitably serve all neighborhoods? “These types of projects are often deployed opportunistically, connecting to existing trails, open space—or leveraging adjacent infrastructure projects,” explains Scott McCready, principal at landscape architecture firm SWA Group’s Houston office, who worked on the widely admired Buffalo Bayou Park in 2015 and on flood-resiliency for Harris County. That approach can result in already well-served areas’ seeing greater investment, but leaving needier neighborhoods behind, which McCready says “is an ongoing challenge to all involved.”

The Flood Control District has used government funding to buy private houses that have been repeatedly inundated, and demolish them. The program also has obtained large tracts (such as a golf course and industrial land) and excavated them to form waterways lined with pollutant-filtering plantings that have the capacity to store large water volumes during storms. Several are as big as or bigger than a 291-acre network of storm detention lakes designed by SWA. Called Willow Waterhole, the lakes are wrapped in habitat and threaded through with trails and bridges. Not incidentally, these add badly needed park acreage accessible to a wide variety of income groups.

The scale of such efforts is impressive, but so is the need within the 10,000 square miles of the metro area, as Houston spends less per capita on parks than almost any large city. McCready hopes a new park-board plan called Beyond the Bayous, which explicitly identifies equity as a goal, can connect the bayou landscapes to upland neighborhoods lacking green space, through “gateway” infiltration parks and bioswale-lined pedestrian and bike corridors.

The innovative and comprehensive approaches advocated by McCready confront an aversion in Texas to planning on a watershed or regional scale. Greater flood-protection investments are being delayed, for example, thanks to a controversy over the state’s distribution of $2 billion in federal dollars spread among outlying communities while none of the money was allocated to hard-hit and populous Houston and Harris County. A HUD probe showed the state’s actions “substantially and predictably disadvantaged minority residents, with particularly disparate outcomes for Black residents,” as reported by The Texas Tribune.

Given the urgency and extent of Houston’s problems, it could be easy to default to such known civil-engineering solutions as concrete-lined channels and enormous underground storage tanks. To expand this limited palette and develop benefits for more diverse communities, “we try to demonstrate with our work that people will get something new that they didn’t expect,” says McCready. Buffalo Bayou Park showed that a neglected, polluted waterway, winding among freeway overpasses, could become an urban amenity that draws visitors across the city to its paths, bikeways and attractions. The park, at the edge of downtown, has spurred adjacent development and solidified a consensus to create parklike amenities as flood protections are enhanced.

In the southeastern corner of Queens in New York, grass and shrub-covered dunes established themselves over decades on 116 neglected acres along the densely built-up ocean beaches of the Rockaway peninsula. The tract had once been bulldozed for an urban-renewal project that went nowhere.

But now a real-estate team—L+M Development Partners, the Bluestone Organization, and Triangle Equities—led by the New York City Department of Housing Preservation and Development has broken ground on Arverne East, a mixed-use, ocean-facing community that is deploying a comprehensive sustainability and climate-resiliency agenda, while bringing sorely needed affordable housing and economic development opportunities to a diverse low-income neighborhood vulnerable to storm surges and rising seas. 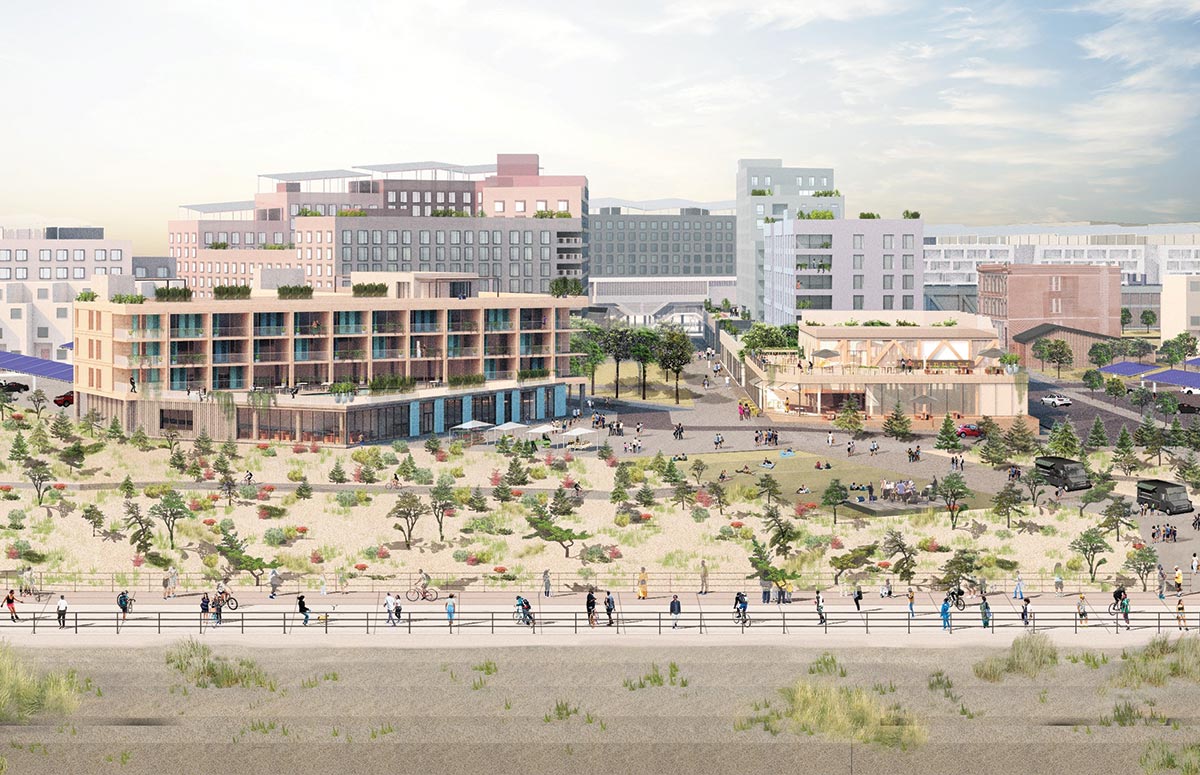 The baseline of the development has been raised 16 feet higher than a mapped but obsolete flood-elevation standard, and the scale of the development steps down to townhouses and then tiny attached houses, as small as 400 square feet, that emulate the little beach bungalows with front porches characteristic of the neighborhood. Of the 1,650 total units planned, all but 300 will be offered below market rate to buyers and renters ranging from the formerly homeless to those of low, moderate, and middle income. The tiny cottages—unique in new construction—add affordable ownership to the mix, an effort to “hack the market,” says Walter Meyer, principal of LOLA.

The development will achieve its zero-carbon goals with tactics that adhere to the Passive House standard and include a geothermal heating and cooling system, and photovoltaic solar panels.

Meyer’s LOLA has designed enhancements to the natural dune system to protect the development. The scheme deploys interlocking rows of sand ridges to minimize storm surges and dissipate wave energy, alternating with swales that store and infiltrate flood waters and that host trees and shrubs to help anchor the beach and slow high winds.

Since heavy rainfalls usually coincide with tropical storms, bioretention networks threaded through the development will harvest the runoff from adjacent and internal streets, storing excess water and infiltrating it when existing underground storm drainpipes are likely to be inundated. These nature-based tactics will manage rainfall from a 100-year storm, 10 times the current standard.

In a consultation process, residents of the community sought economic development and entrepreneurship opportunities, and the development plan has brought local players and social services groups into the project. The Rockaway Brewing Company, a beloved gathering place, will relocate to Arverne East and expand to host an incubator for aspiring cooks, who will make use of fresh produce grown on urban farms nearby. On-site, a farm plot will be set up by the Campaign for Hunger, an organization that helps communities secure healthy food options. Another nonprofit, RISE, will expand its youth-development activities and environmental-education programs at the project.

The development team proved the financial efficacy of its resiliency and sustainability concepts by deploying them in a three-building development on an adjacent site called Beach Green Dune. With the success of this pilot project, says Meyer, “the developers and lenders gained faith that they could be scaled up in Arverne East.” And self-seeding nature lives on too, with 35 acres of the site dedicated as an enhanced public preserve.