Ja Architecture Studio works at the point where architectural formalism collides with the city. Its office occupies a former convenience store in the Queen West neighborhood of Toronto a district of Victorian worker housing that has been remade by generations of DIYers and builders.

Here, partners Nima Javidi, 46, and Behnaz Assadi, 44, who run the studio with associate Kyle O’Brien, design, make models out of wood and concrete, and hold court on the corner patio, surrounded by the domestic disorder of the street. “Our work is driven by two themes,” says Javidi. “One of them is our pure interest in architectural form. And the other is our observation, as citizens, that the city is not so much about architecture.” 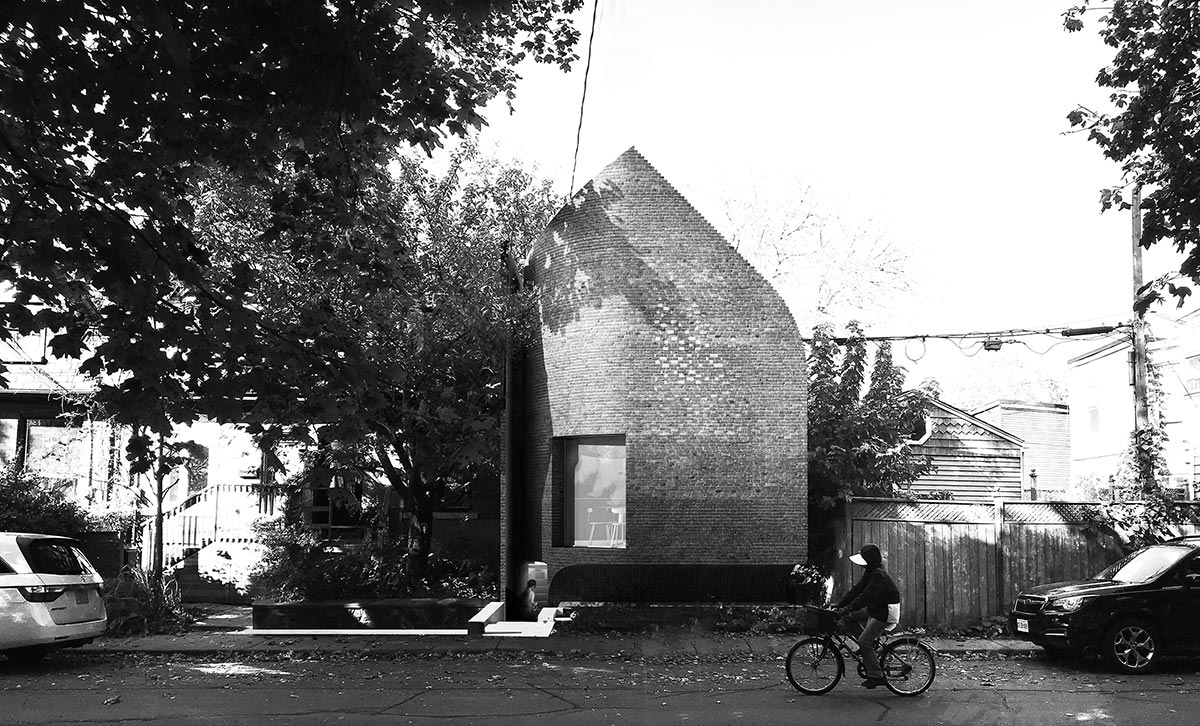 Wardell: Tucked into a wedge-shaped lot, the curved walls of this two-story house addition merge with the corbeled brick roof to create a seamless but heavy form that is rich in texture, while a cantilevered front wall suggests a lightweight tectonic. Photo courtesy Ja Architecture Studio, click to enlarge.

The couple both attended the University of Tehran. Its architecture school, Javidi says, teaches architecture and the visual arts in tandem—an approach that has influenced Ja’s focus on formal concerns. Both settled in Canada in the early 2000s and studied at the University of Toronto’s Daniels Faculty of Architecture, Landscape, and Design, where Javidi pursued urban design and Assadi trained as a landscape architect under Charles Waldheim. Then Assadi worked for OMA in Rotterdam for a year before returning to Toronto, where she is now an assistant professor at the Daniels school. She describes herself as heavily influenced by landscape urbanism, with its interest in infrastructure and in large-scale systems. 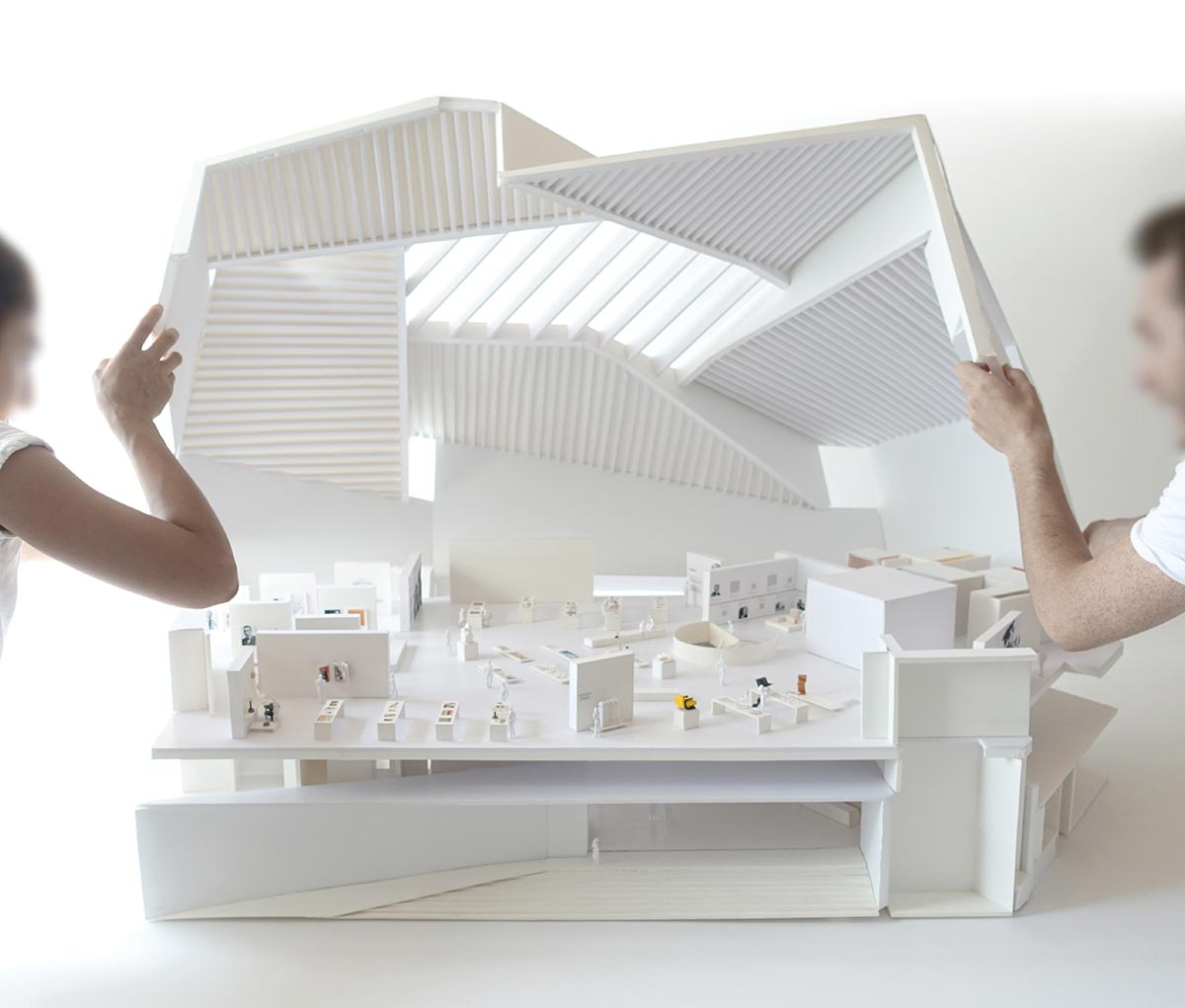 Bauhaus Museum: For this competition entry for a museum in Dessau, Germany, Ja maintains the influential school’s pinwheel organization, as designed by Walter Gropius. This spatial configuration, coupled with the expressive geometry of the roof, allows for clear spans on the upper level and maximum flexibility for curating exhibitions. Themes like space, light, textures, and the crafted detail become threads that connect the studio’s design to the original building (right). Photo courtesy Ja Architecture Studio

These interests come together in their built work, which is heavily concentrated on their home turf. A consistent language of arched vaults and complex polygons shows up repeatedly on these streets; in many cases, protrusions or voids reach out toward irregular gaps in the built form or across a backyard to a new accessory dwelling. “We’re very interested in architecture being seen in multiple places across a neighborhood, of expressing a language at the scale of the city,” says Assadi.

Formal ideas recur in small projects and big. In their competition entry for the Kaunas Concert Centre, a lobby space culminates at a corner with a three-story arch, pulling together oblique roof and wall volumes. At a built project on Foxley Street in their neighborhood, a steel arch defines the front rooms of a two-story row house, sitting tight between the neighboring gables and porches. “The theme of nesting an arch within a polygonal footprint remains,” says Javidi. A few blocks away at the bakery café Forno Cultura, arches show up again, defining windows within a slanted wall. 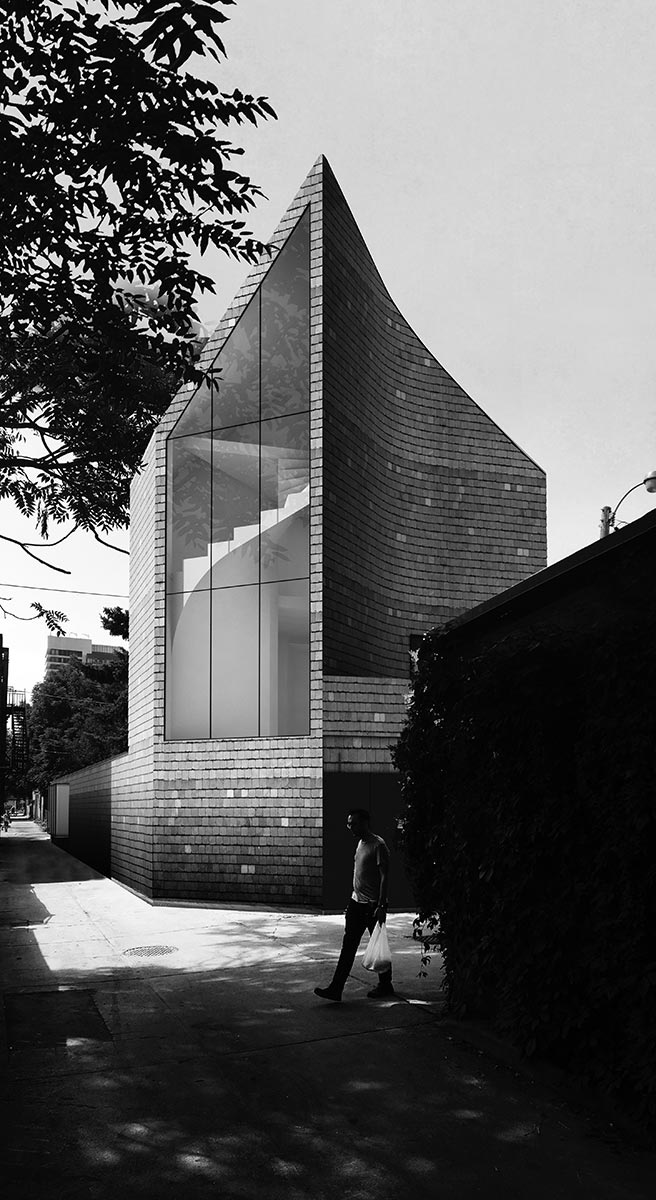 The Octagon: This ADU borrows from turrets found in nearby Victorian semidetached houses. A slight twist in the roof ridge— below which balconies are carved out—creates a form that is both responsive to its surroundings and dynamic (1 & 2). Images courtesy Ja Architecture Studio

This playful but measured form-making cuts against the grain of both Toronto’s Victorian urbanism and the right-angled rigidity of many of Ja’s architect peers. But the architects don’t want their work to stand in isolation. Assadi cites Underscore Gallery, a three-story mixed-use building whose front angles inward to catch the oblique line of Dundas Street. Plaster-clad volumes stretch from the painted brick facades to define inset balconies. “You can see people using them, looking out at the city, having conversations,” Assadi says. “Our favorite projects are the ones that, after they open, become part of the life of the city.” 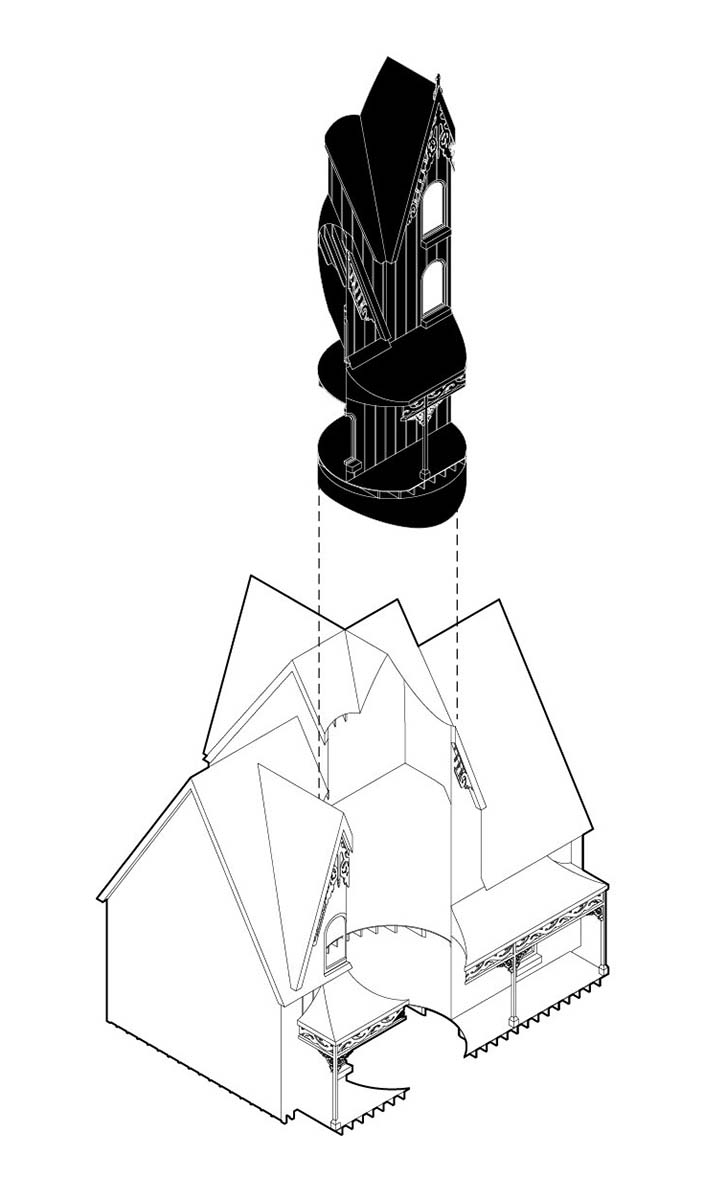 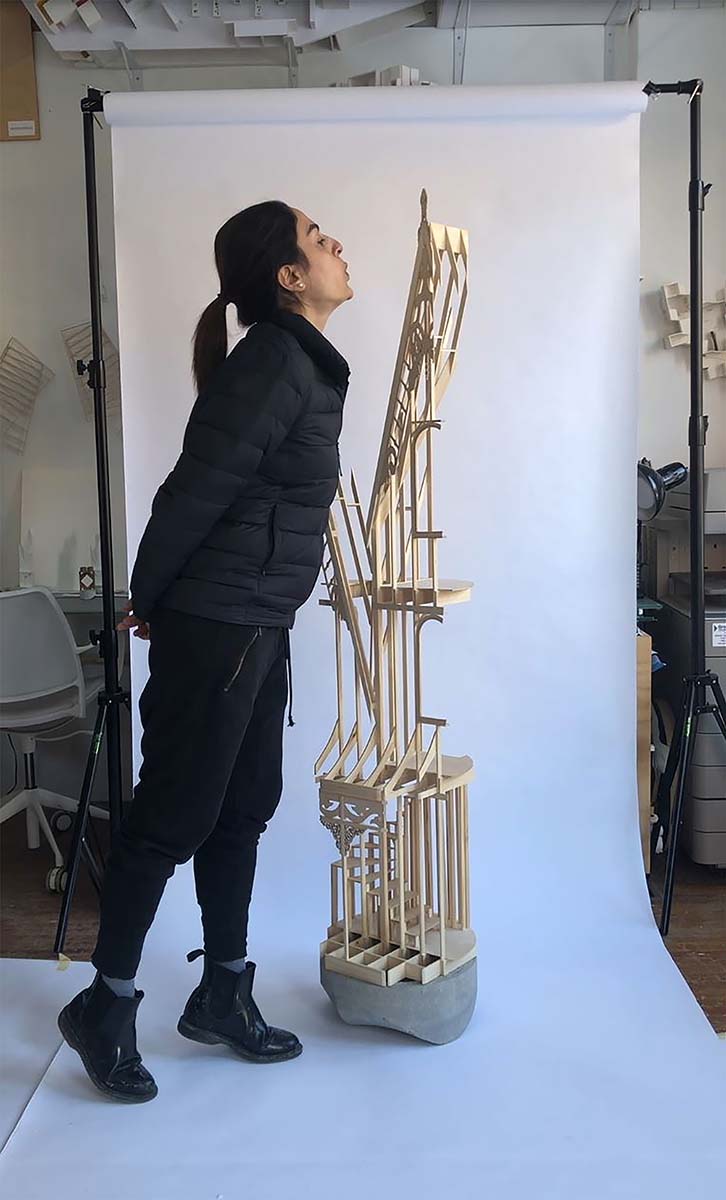 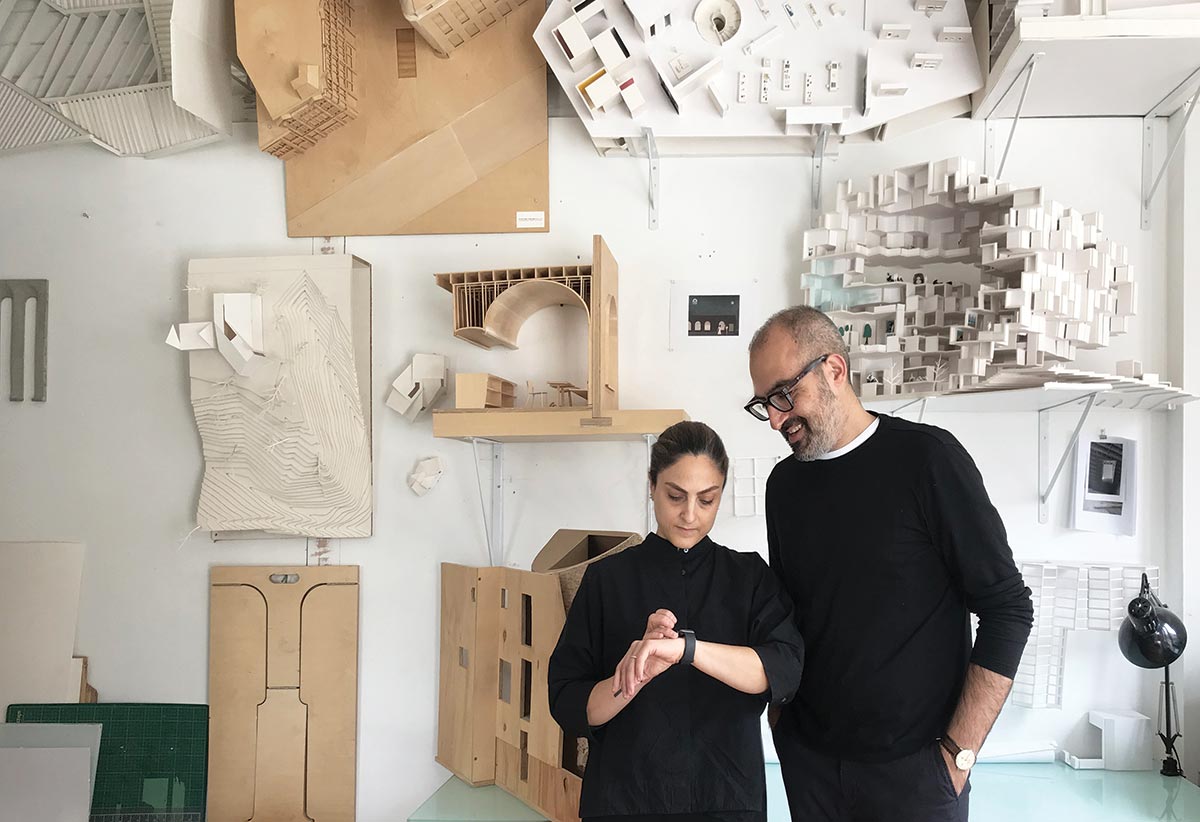 KEY CURRENT PROJECTS:
44 Foxley, Wardell, Markham, One and a Half, Forno Cultura Bakery, East Room (all in Toronto)

Back to Design Vanguard 2022
KEYWORDS: Toronto