The term “adaptive” in the name of Ruth Mandl and Bobby Johnston’s Brooklyn-based firm may sound like a buzzword but is an apt description of their work. They focus exclusively on renovating and adapting existing buildings. Though one of their first projects was the renovation of a classic 19th-century Brooklyn brownstone, historic preservation was aligned with a substantial reduction in greenhouse-gas emissions and an elegant, even whimsical, way of reusing existing elements. “Asking what sustainability can be has been a journey for us,” said Mandl, 39, on a tour of one of their recent projects. 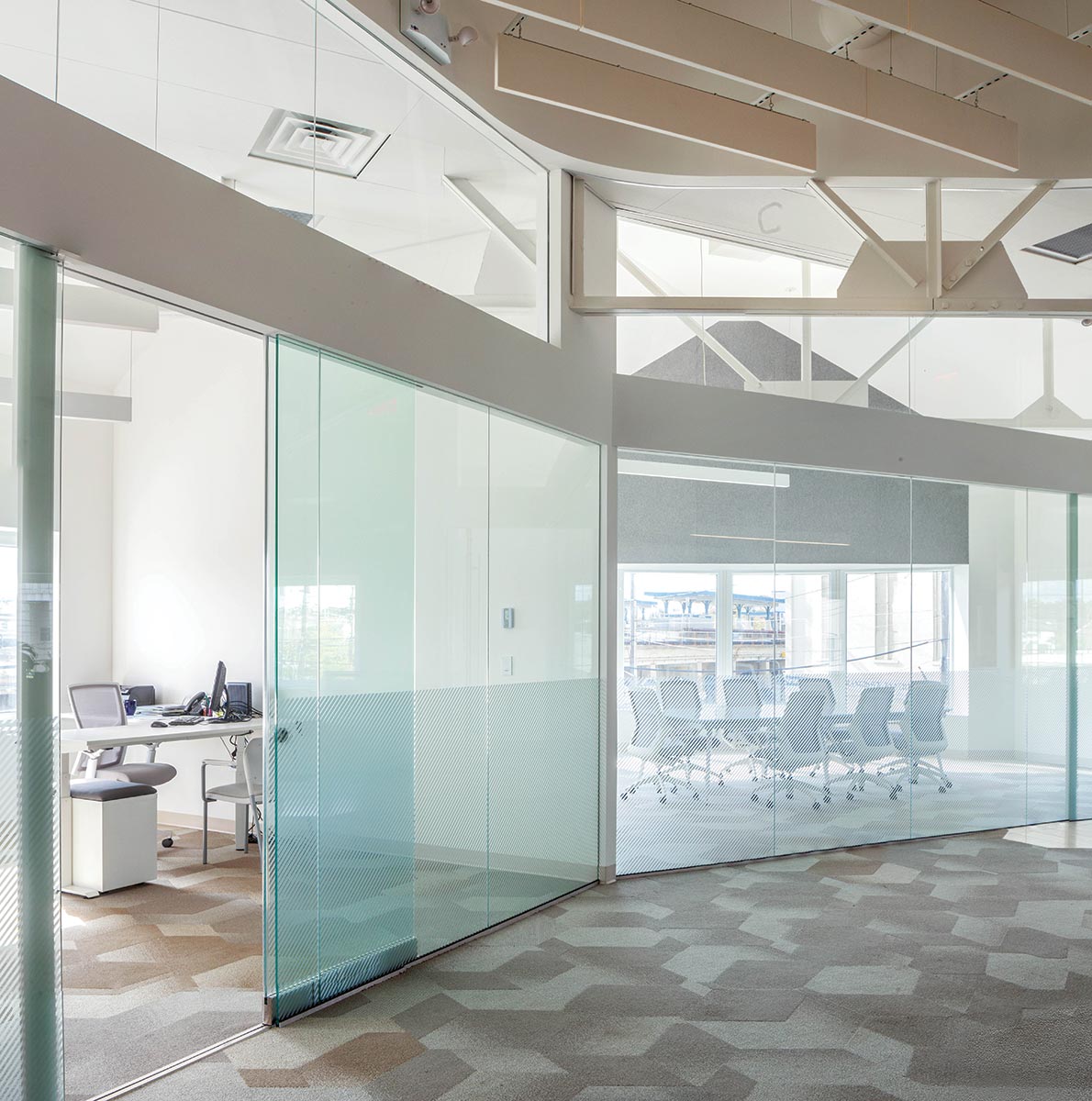 Their preferred low-energy path is Passive House, which relies on a high-performance envelope. Their adaptive approach to existing structures—even a nondescript 1950s former bank building—is one of reducing operational emissions but also retaining as much existing building fabric as possible to avoid releasing the carbon embodied in the materials.

The couple, who met at Columbia University’s architecture school, started their practice in 2011, not long after graduating, and after short stints at various firms. Mandl, who was born in Vienna, grew up in a home renovated to the Passive House standard by her family. “I got to appreciate the quality of life in such houses,” she says, including the quiet and lack of drafts.

From 2017 to 2018, they rehabilitated a brownstone in Brooklyn’s Bedford-Stuyvesant neighborhood as their first Passive House project. After gutting the interior to add insulation, decorative interior woodwork was selectively restored and reinstalled to enrich the flush modern details and cabinetry the couple added. This home for their family—they have a daughter, Lucia—has become a selling point as word about it has gotten out, says Johnston, 41. “We tour prospective clients through, once or twice a month.” 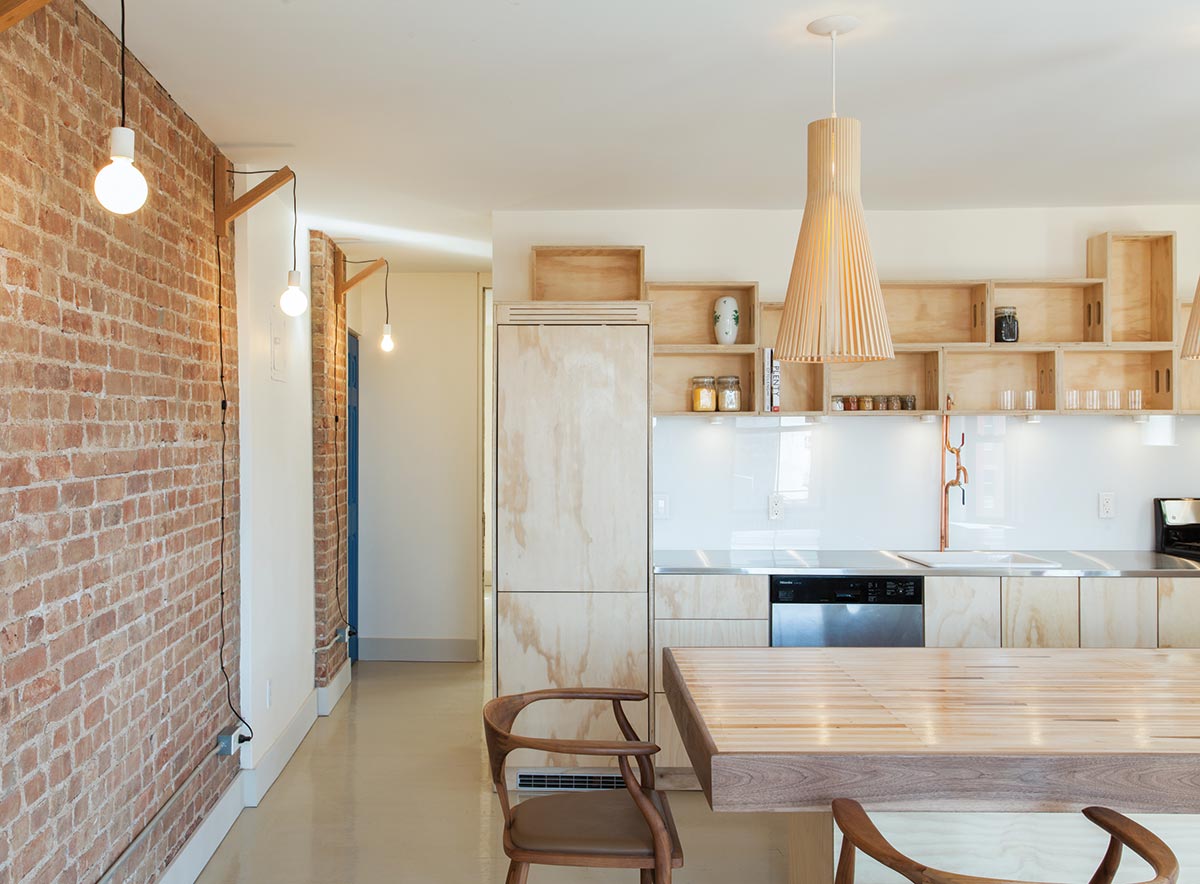 Recycled Content Apartment: Tasked to create a family home on a tight budget, CO Adaptive reconfigured this 675-square-foot apartment to accommodate two bedrooms and ample space for entertaining. The material palette of exposed-brick walls and reclaimed materials created a distinctive and cost-effective space. A custom sliding counter, made of wood reclaimed from a bowling lane, provides flexibility by shifting to enlarge the kitchen space or to serve as a big table for dinner parties. Photos © Peter Dressel

In their largest project to date, a 12,700-square-foot pair of shed-roofed, timber-framed industrial structures in Brooklyn, dating from 1902, were repurposed to serve the Mercury Store, which sponsors residencies for emerging theater artists, in four airy studios. The newly metal-paneled exterior encloses extensive insulation, as does the roof. New high-performance windows and a restored clerestory deliver ample daylight.

Mercury Store: Originally an industrial site in the Gowanus neighborhood of Brooklyn, this double shed-roofed heavy timber and brick building was transformed into a new developmental space for theater artists. The previously clear symmetry of the building was restored, and the existing floor was removed on one side to create a double-height assembly space. The metal-paneled exterior encloses extensive insulation (1, 2 & 3). Photos © Naho Kubota 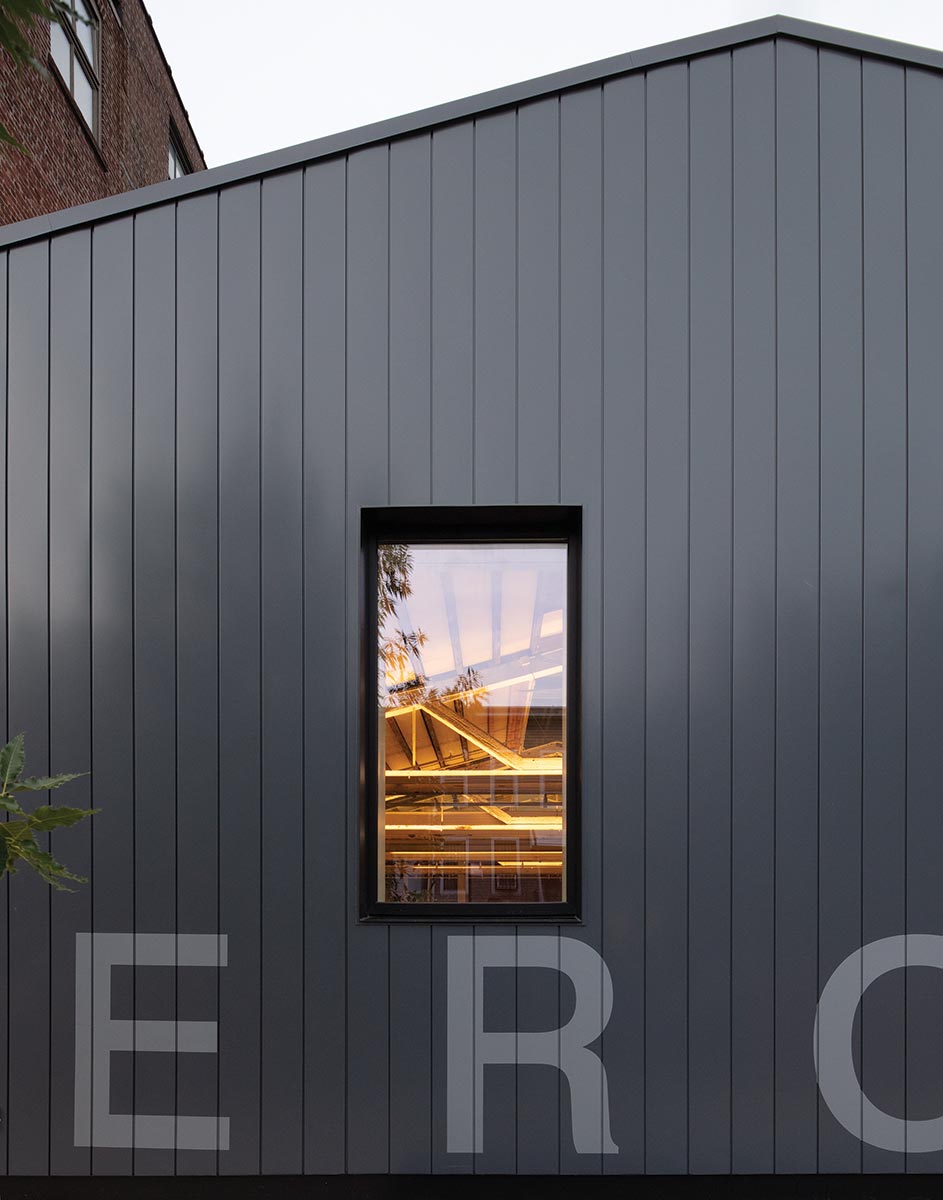 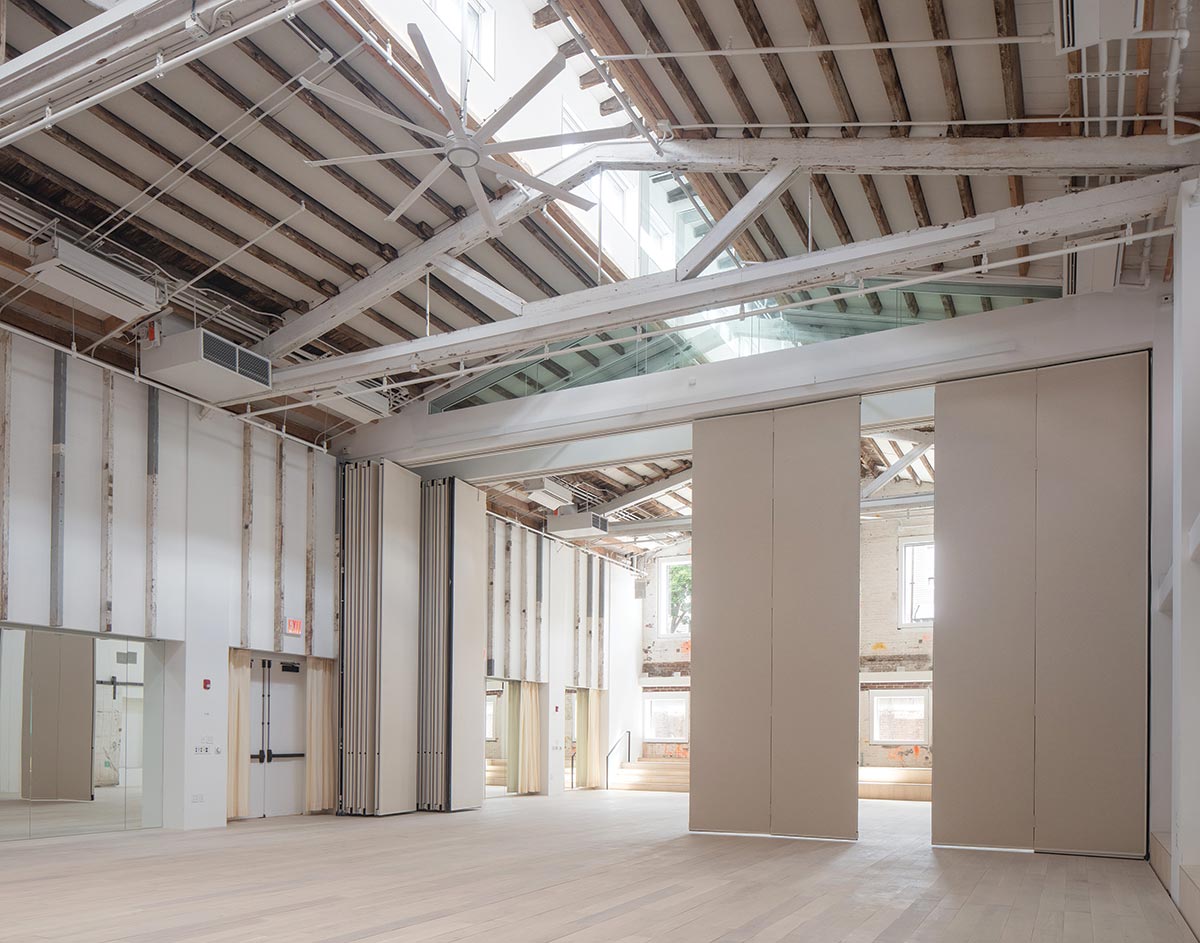 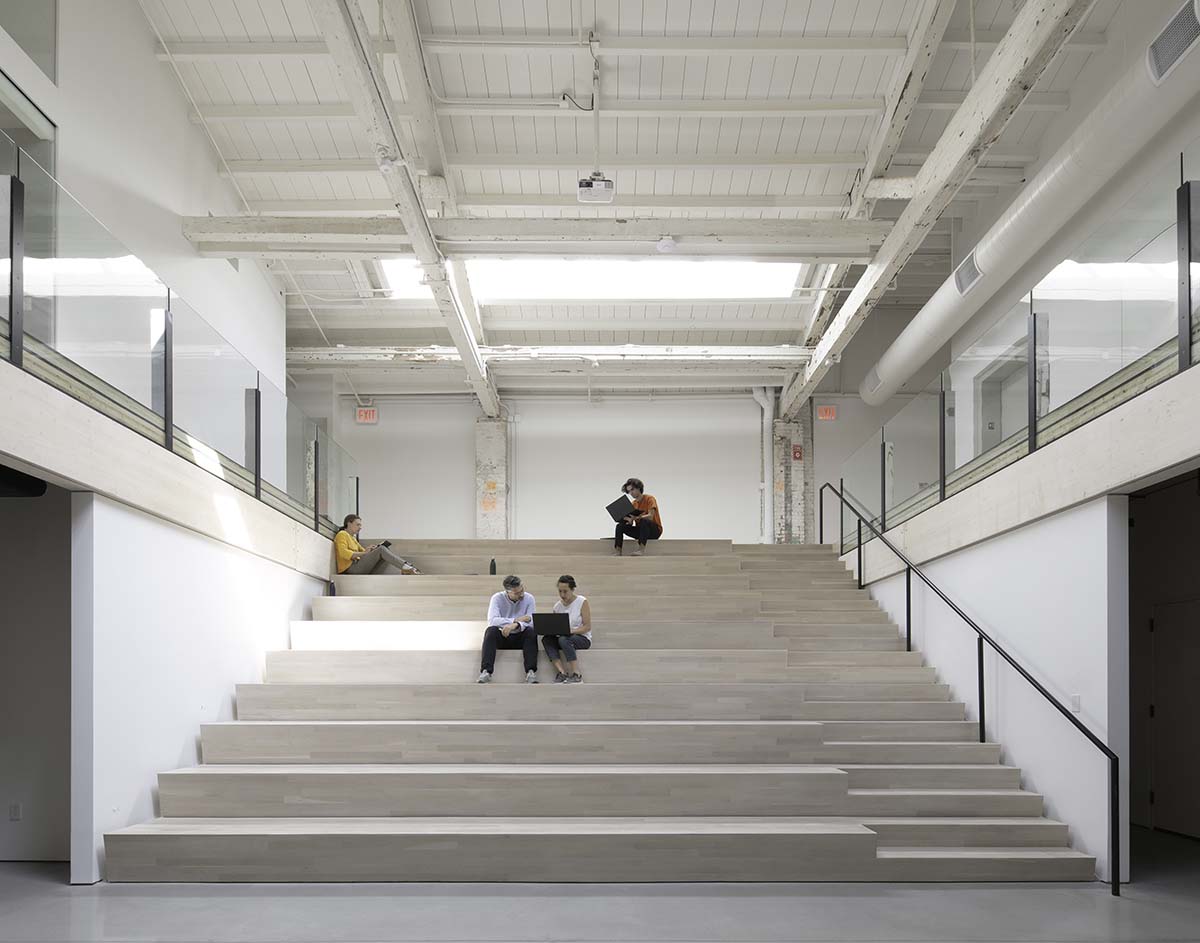 Repurposing salvaged materials is not just a carbon-sequestering obsession but an expressive sensibility. The principals cleaned up the existing timber-framed roof trusses and left signs of use untouched on masonry walls. They replaced an existing mezzanine in one of the sheds, framing it in bleached laminated-wood columns and beams, with a structural floor made of cross-laminated timber. They inventively reused joists and other salvaged wood, as in uprights that support, and visually contrast with, sleek glass balustrades.

“We grapple a lot with trying to make Passive House energy efficiency more economically accessible,” says Mandl. “If it can’t scale, it won’t have impact.” In a Queens Passive House project, “we are attempting to remove as little as possible, while still upgrading all the systems and making it a certified Passive House.”

They are pushing deeper into sustainability, hoping to open a research arm. For a new office space, still in construction at press time, they are making custom demountable partitions and other elements out of carbon-sequestering materials such as wood, wood fiber insulation, cork, and wool felt. They will build their own desks and source lighting from local makers “in an effort to keep the build-out very local and carbon conscious,” Mandl says. 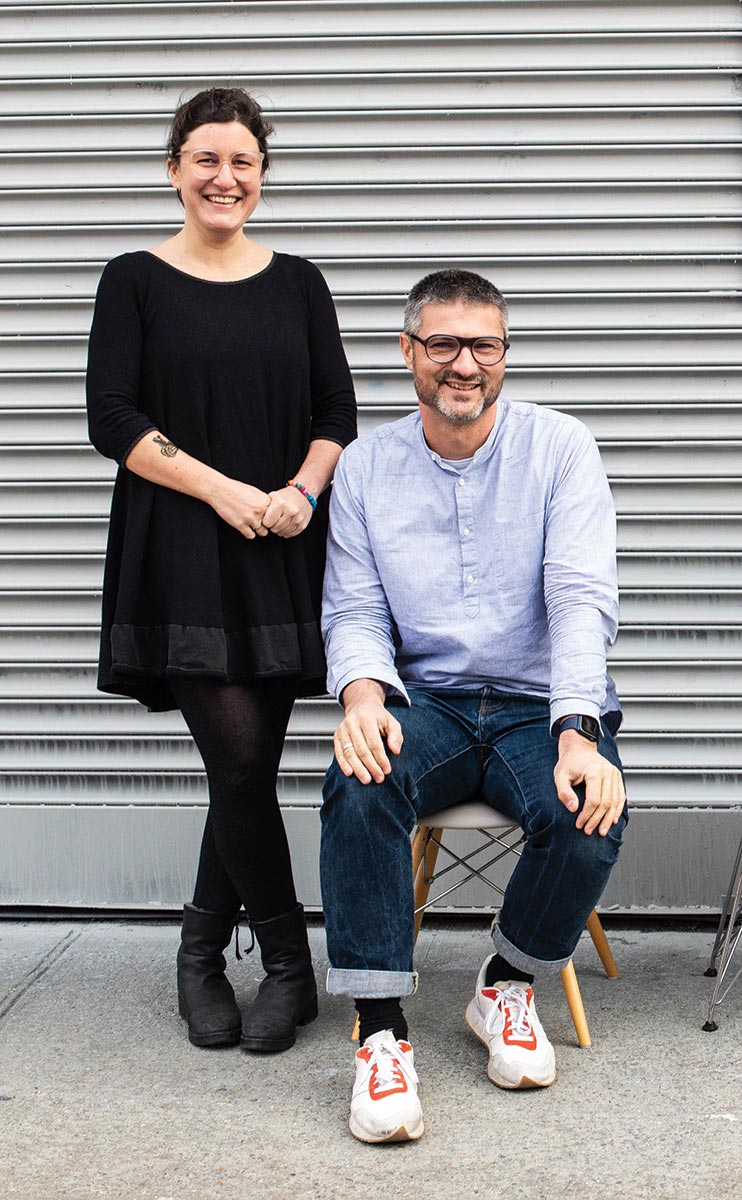