In May, the 11 staff members of Freehaus all happily gathered at the office to work together in the same space for the first time. Before the pandemic, the practice, led by Tom Bell and Jonathan Hagos, were just five in number, but, thanks to competition wins during lockdown—most notably for the City of London School revamp in 2021, in collaboration with Morris+Company—they have expanded and are now back, with an office in the heart of the creative district of Shoreditch. “I always remember how fun it used to be, working in this area,” says Bell, who began his career at WilkinsonEyre, in offices on nearby Old Street. “When you are starting out in your career, it’s just good to be connected,” he says. “Working from home has definitely taken its emotional toll on people,” adds Hagos. For a practice that engages with the complexity and dynamism of a city, it is a good moment. 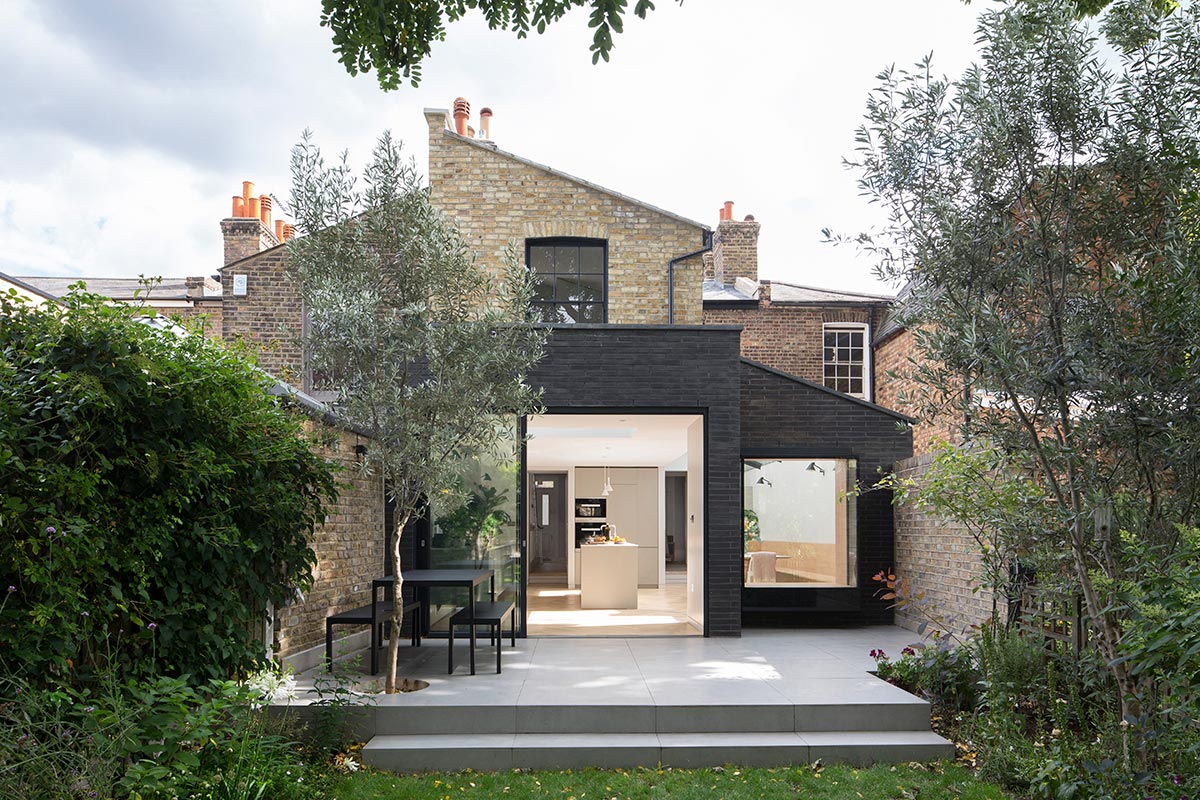 Wilton Way: The refurbishment of an early Victorian terraced house in Hackney, London, looked to celebrate the characteristics of its context and, in particular, the rhythmic rooflines of the streetscape. Photo © Agnese Sanvito, click to enlarge.

Their conversation is peppered with the word “civic,” a slightly old-fashioned phrase that has been supplanted by the more modest “community” or “neighborhood” in contemporary discourse. However, for the two men, who first met at the Bartlett School of Architecture, it conveys a shared humanity. They began working together with four projects, two of which were more overtly “civic”: The ClementJames Centre in London, which will finally complete this year; and St. Michael’s Community Centre, which remains unbuilt. The other two were the Blue Nile, Hagos’s mother’s award-winning Eritrean restaurant, and a pie shop commissioned by a good friend. 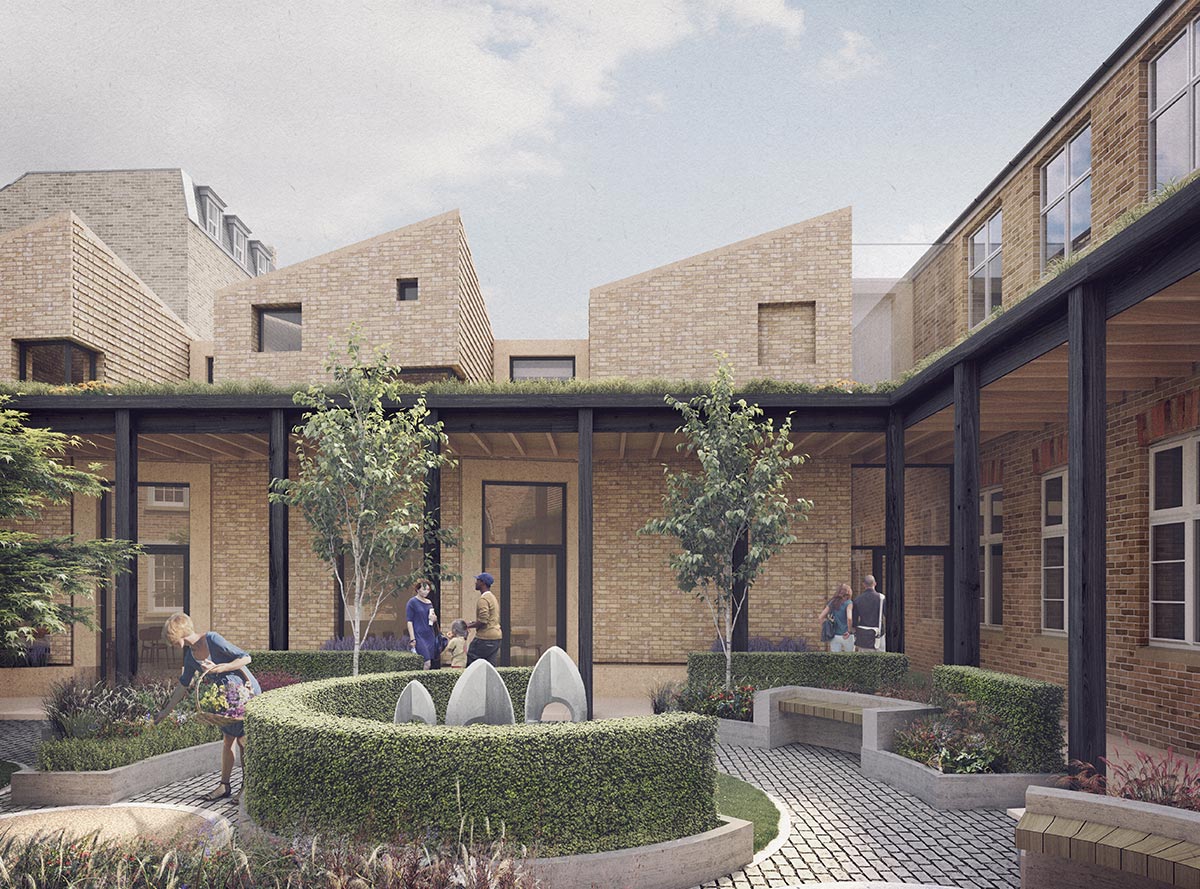 The ClementJames Centre: A dedicated two-story learning annex will allow the charity to offer more education opportunities for children and employment support for adults. The broken form of the annex softens the scale of the building and allows more daylight to reach the courtyard beyond. A winter garden will occupy a previously underutilized area of the site. The design purposely has a light touch, to respect the significant heritage features of the adjacent St. Clements Church. Image courtesy Freehaus

Those commercial projects gave them entrée to the food and beverage industries. Working with other design professionals for exacting clients, they made headway. Around 2016, they realized that jobs in the sector were allowing them to do something else. The high-end café chain Ottolenghi gave them projects in challenging heritage conditions with complex, extended client groups, like the Victoria & Albert Museum (V&A). “We were able to corral a multifaceted stakeholder, or bring together two or three brands which might otherwise be in conflict and find a path to a common vision,” says Bell. (They eventually created a series of concierge stations at the V&A.) 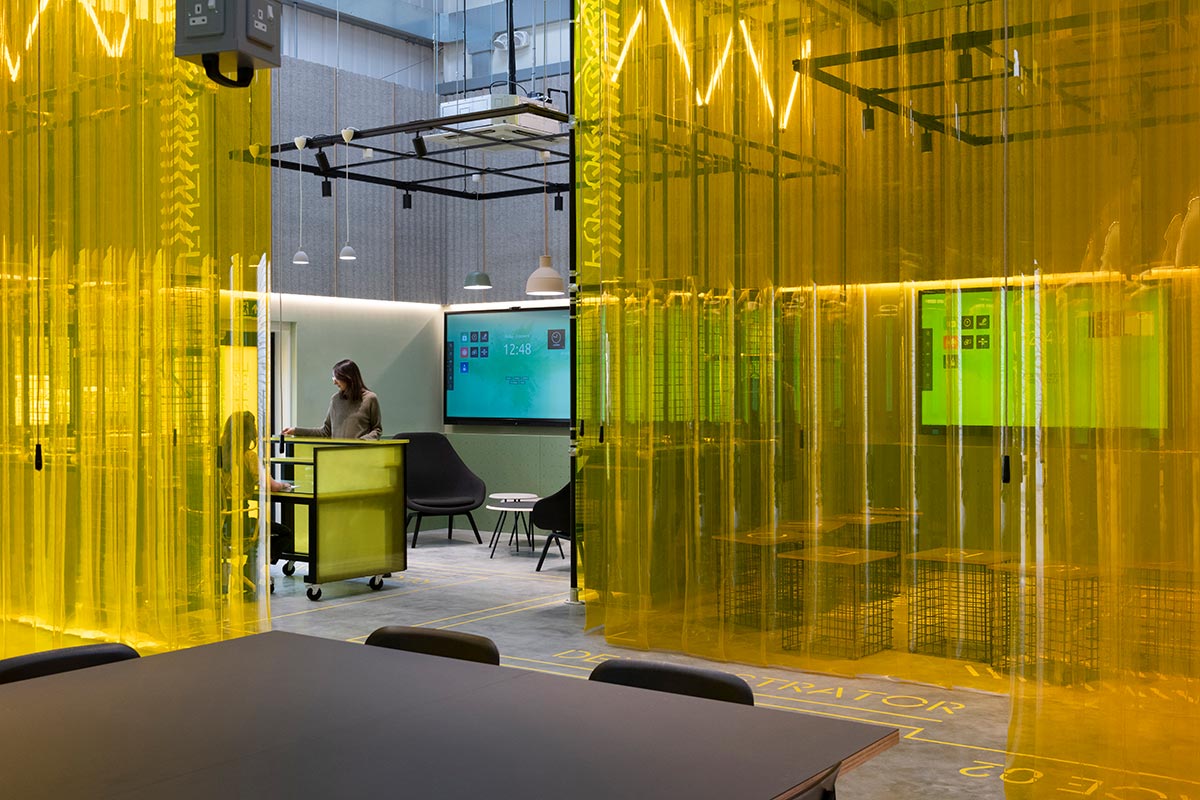 Future Cube: This retrofitted space enables access to innovative technologies such as VR and additive manufacturing processes, and provides areas for meetings, workshops, and events. Everyday materials like PVC strip curtains and felt panels were used in resourceful ways to create flexible areas and to soften the existing industrial shell. Photo © Ivan Jones

Bell and Hagos work well in an existing condition, as architects in the UK are increasingly expected to do, and clearly love to bring different textures and material effects to their buildings. Chipperfield is a favorite architect, and one can see his influence in the sensitive, thoughtful refurbishment of the Bahlsen Stammhaus in Berlin, completed in 2019. Slightly livelier than Chipperfield, they laid the floors of this historic Art Nouveau headquarters of a German biscuit manufacturer with terrazzo, to give it the quality of confectionery. 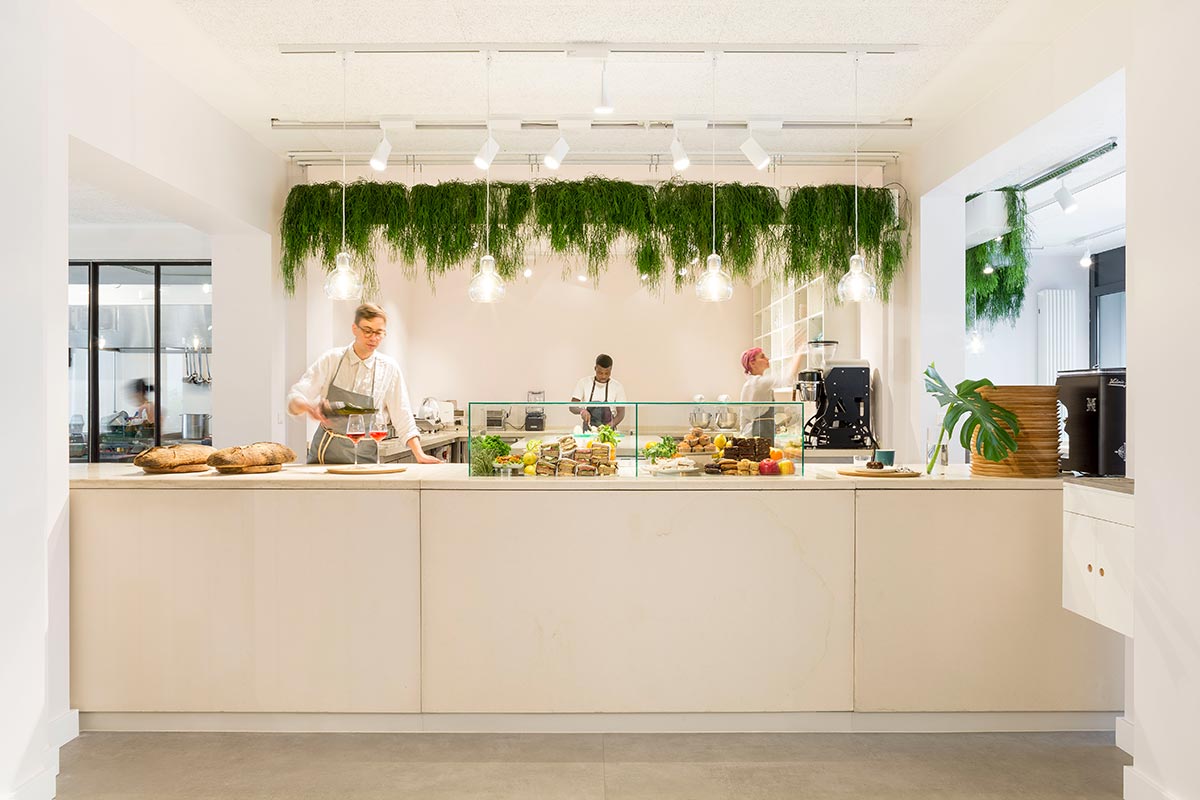 Hermann’s: Freehaus designed and led the delivery of Hermann’s, a new multifunctional coworking space centered around food innovation in Berlin. Through a combination of niche spaces, reconfigurable furniture, and opportunities for display and demonstration, the space functions as an environment for discussion, collaboration, and innovation. Photo © Adam Luszniak

From 2019, they began winning work from the Greater London Authority, a client with a range of projects. The Africa Centre in Southwark, which opens this month, is for a charity that celebrates the African diaspora in the UK. The new building includes workspaces, a gallery, a performance area, and restaurants. Far from rationalizing or eradicating the complexity of these building programs, Freehaus’s work is a celebration of the many disparate functions of a London that was slowly—but is now quickly—returning to life. 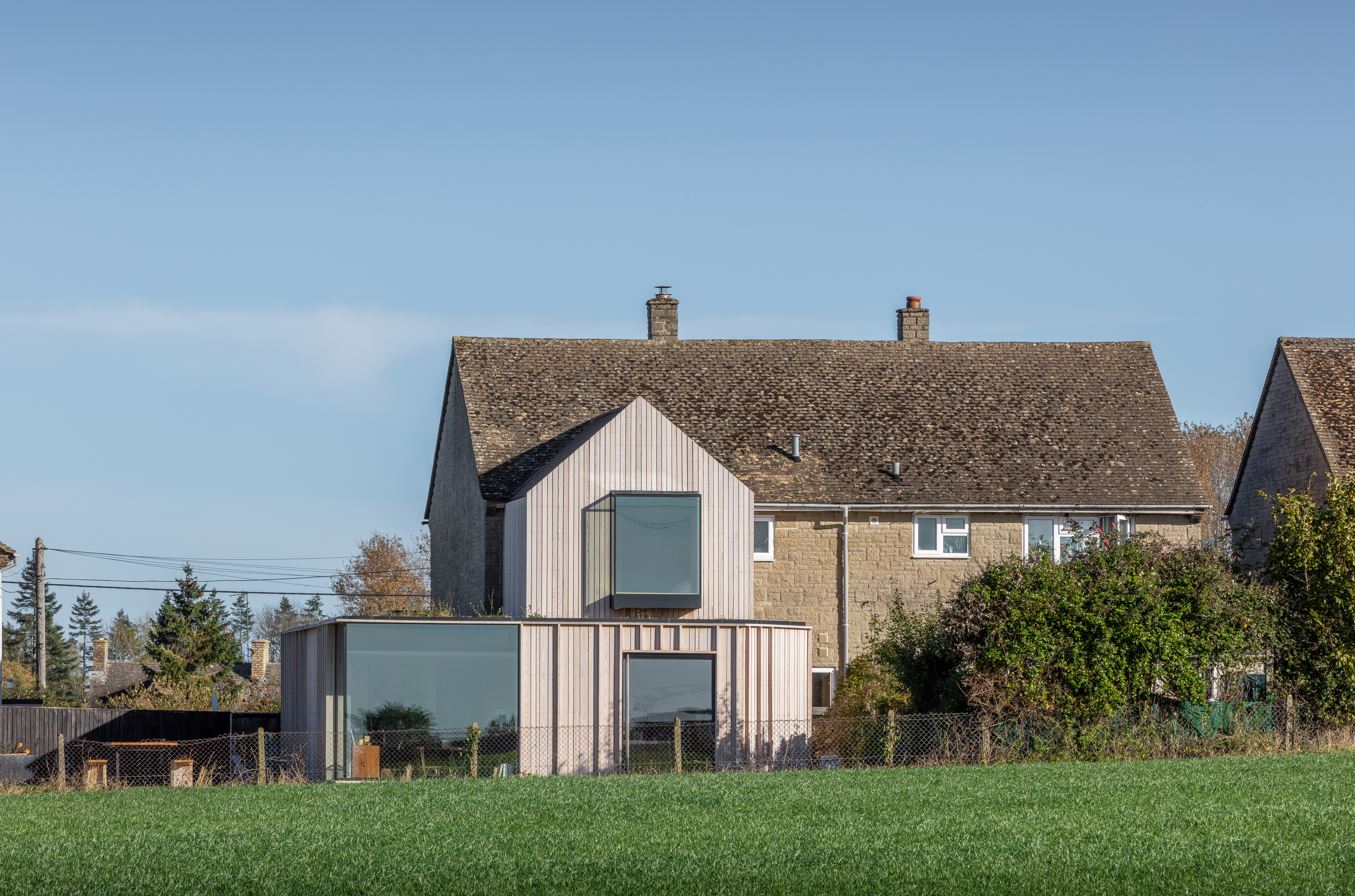 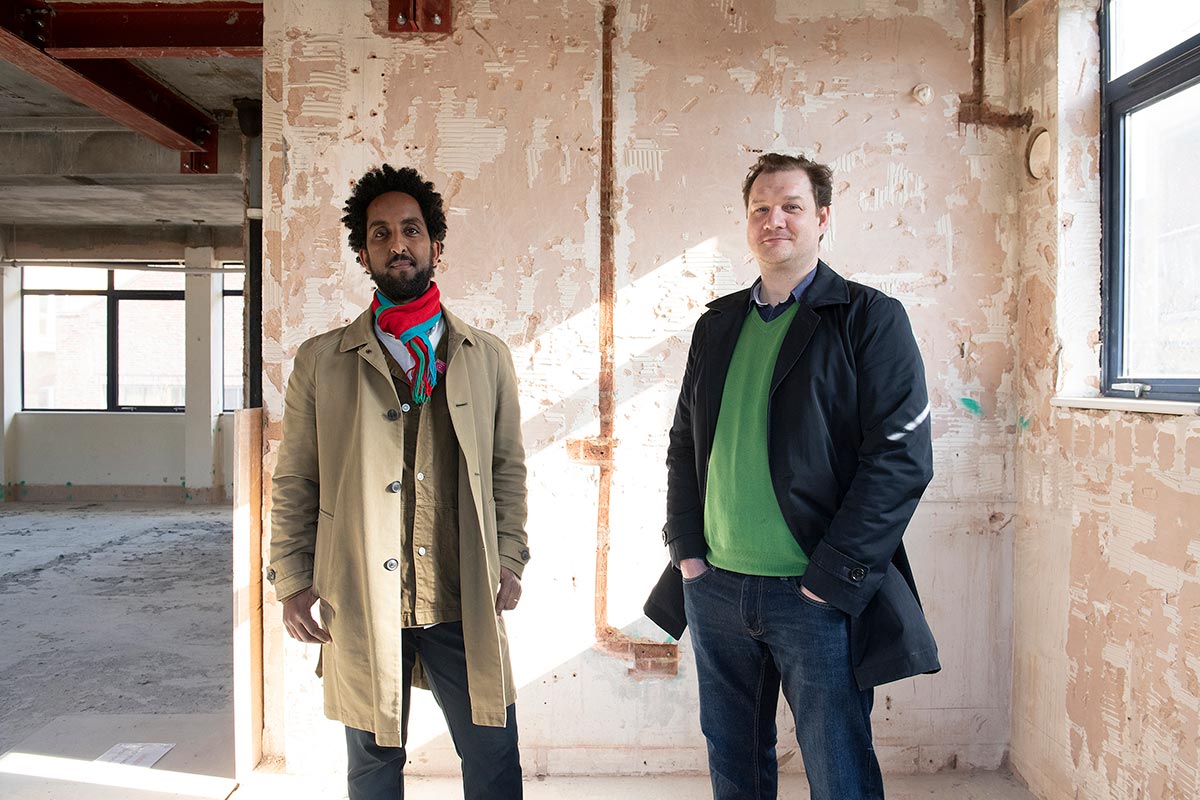