The Halifax, Nova Scotia, firm of MacKay-Lyons Sweetapple Architects is, as its cofounder, Brian MacKay-Lyons notes, “probably best known for our houses” (as can be seen in Record Houses 2009, 2012, and 2016). The Burge house, on Mount Thom, in central Nova Scotia, is a notable example of the architects’ straightforward approach. Embedded in a hill above a meadow that opens to a creek and lake below, the residence is a simple but striking structure. Mackay-Lyons describes its form as that of a “clip” of extruded, corrugated, and folded weathering steel. A board-formed concrete retaining wall on the north side, 144 feet long and 20 feet high, supports the steel moment frames’ column-and-beam structure. Because of the wall and the concrete floor, MacKay-Lyons notes, “You’re living between a folded roof and folded concrete.” In addition, a pair of sliding perforated weathering-steel screens are motorized to give the south facade a sense of privacy and security. The board-formed concrete north wall is exposed in the living area (1) and dining area (2). Photos © James Brittain, click to enlarge. The client, Reuben Burge, who lives here with his wife and two of their four children, is a helicopter mechanic who also builds wind turbines: the ones on the mountain behind the house supply its electricity. He was also the project’s contractor; MacKay-Lyons admires his construction skills, noting that the polished concrete floor has no cracks. Burge uses wood crane mats in building the turbines, and some of the boards from these mats were recycled for the ceilings as well as for formwork for the concrete wall. The car entry fits into the hill. Photo © James Brittain

The house consists of two stories: the top floor, which contains the family’s public living spaces, flanked by bedrooms and private areas at both ends, plus a lower floor that is partially underground and has a lap pool. This level also accommodates a garage for Burge’s collection of vintage automobiles, which enter the space from the carport at the house’s west end. “They’re hidden,” MacKay-Lyons says. “In this part of the world, people don’t show off.” The vehicles are separated from the pool by a glass wall, offering swimmers a unique view of such finds as a 1970 Dodge Challenger “muscle car,” as well as a 1988 Suzuki Samu­rai and a 1984 Mazda RX-7.

Near the pool, an entry opens onto a stair—its wood treads supported by a glass wall—that leads up to the living/dining room on the south side of the house, which has views down the hill to the meadow and the lake. Beside the living area’s fireplace, along the concrete wall that is topped by a narrow clerestory (important, MacKay-Lyons says, since the north side’s exterior basically disappears into the hill) a short flight of stairs continues to the main bedroom and bath. At the opposite end of the house, past the kitchen, are the children’s bedrooms and a family room. The main bedroom occupies one end of the house, connected to the outdoors by its own stair at the northwest corner. Photo © James Brittain

In addition to the wind turbine power, there are passive-solar features, including the concrete floor’s thermal mass and the building’s orientation, which maximizes daylight and protects from cold winter winds. A wood stove with an efficient electric fan-coil-powered forced-air system heats the building.

MacKay-Lyons says that, like the firm’s other work, the structure is “stripped-down and archetypal” and calls it “a landscape piece.” Even with its commanding form, the house never upstages its bucolic surroundings. 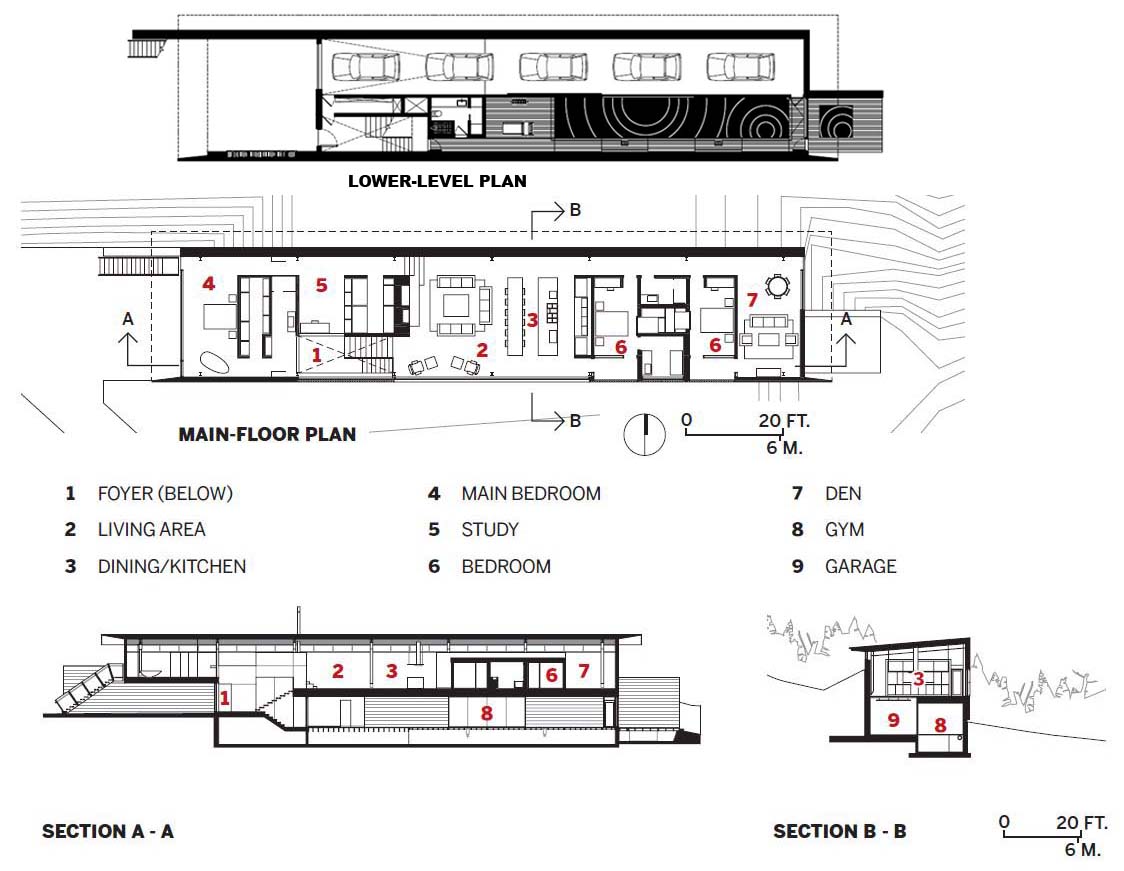