Sofía Betancur's Polpo Knits Together Past and Present in Mexico City

In 1926, just over 20 years after the founding of the Colonia Roma as a Parisian-style enclave for Mexico City’s wealthiest families, the doors opened to the neighborhood’s first market, called el Pasaje Comercial Parián. The space took its name from the long-demolished Mercado Parián, which occupied the city’s central plaza from 1703 to 1843 and sold, among other goods, luxury products imported from Asia by Spain’s legendary Manila galleons. The grandiose name matched El Parián’s flamboyantly eclectic facade—crusted with limestone garlands, heraldic shields, and Art Nouveau mascarons—if not the modest ambitions of the shops inside, which sold fruit, fish, and cold cuts to local families. Set on one of La Roma’s most important thoroughfares, El Parián became emblematic of the neighborhood, reflecting its gracious origins, its decades of decline in the second half of the 20th century and, most recently, its emergence as a port of call for a transient international population flocking to the Mexican capital. Polpo occupies a set of food stalls that open onto a covered passageway in the historic El Parián market. Photo © Arturo Arrieta, click to enlarge.

The architect Sofía Betancur first moved from her native Colombia to Mexico City in 2012, settling, like many foreigners, in La Roma. She recalls her first impression of El Parián from those years as “a gorgeous place with great spatial quality and connectivity, but really underutilized.” In 2020, the grandson of the Pasaje’s founder (who was also its architect) spearheaded a renovation of the central gallery—a subtle intervention by Alfonso de Garay in creamy terrazzo and gray cobblestones—and the incorporation of hospitality and design businesses on its ground floor. Betancur, who has designed several bars, restaurants, and taquerías around the city, was hired as the architect for one of the new Parián’s anchor businesses, a restaurant called Polpo, run by Italian chef Marco Carboni.

At first, Betancur says, Carboni and his team hadn’t settled on how they would use the space, which would eventually occupy 750 square feet within four former storefronts. Betancur—who worked for seven years under architect Tatiana Bilbao before going out on her own—began by exploring the room’s spatial possibilities, particularly how best to incorporate the prominent structural columns left over from the original subdivided spaces. One of the first options Betancur presented centered on a long standing bar, akin to those in tapas joints around Barcelona and Madrid or in Italy’s ubiquitous coffee-and-amaro dives. “I think that, all together, we came to this idea of the typical Mediterranean market,” Betancur says. Although small, the restaurant offers patrons a variety of seating options, from stools around the bar (1) to a banquette tucked near a refrigerated display case (2) and tables in the old market’s cobblestone galleria (3). Photo © Arturo Arrieta Rather than attempting to erase the room’s pre-existing barriers, Betancur “resolved this obstacle by giving each space its own identity.” Near the center, a U-shaped bar—“the heart of the restaurant,” Carboni says—wraps around an open kitchen, flanked on either side by a pair of standing bars, two pill-shaped monoliths rising from the concrete floor. At the far end, Betancur divided the last of the four sections between a hidden prep and storage area in the back and a bank of glass cabinets stocked with cured meats, wines, and cheeses in the front, “in homage,” as Carboni put it, “to the displays in European storefronts of the last century.”

With the layout decided, Betancur moved on to materials. “Marco is Italian, and so are several of the investors, so we wanted to translate their sensibility and culture,” Betancur says. “We wanted the space to be classic and warm, but we also wanted it to be very Mexican.” To achieve that balance, Betancur used entirely local materials, many of them deeply embedded in the city’s urban fabric, cast in a dark, wine-soaked color palette evocative of candlelight and Barolo.

For the two standing bars, Betancur chose a claret-colored terrazzo, a material used widely in Art Deco entryways on buildings throughout the city’s central districts. A counter honed from copper, a material mined heavily in Mexico’s northern deserts, wraps around the open kitchen, whose work surfaces are covered in gray slabs of Santo Tomás marble from the nearby state of Puebla, a material used for pavements and Metro platforms around the city. Prefabricated-concrete wall panels rise a meter up from the floor like industrial wainscoting, matching the height of the bar tops to create a horizontal thread that cinches the four spaces together. Wooden accents in tzalam, a walnut-like wood from the Yucatan peninsula, echo the handful of tables and chairs that spill out into the central passage to transform an otherwise transitory space into a social one.

Nearly a century after its construction, that corridor remains a mirror of the neighborhood that surrounds it. In its original incarnation, El Parián was “an elegant little market,” as one newspaper story from 1932 put it, “that resolves the daily problems of many families.” In the last few years, it has become visual shorthand for the polemic around La Roma’s rapid gentrification, a process driven by short-term rentals like the Sonder apartments on the Pasaje’s top floor. The Pasaje and its businesses, Betancur admits, no longer address the basic needs of people who live in the neighborhood. It may very well contribute to their new “daily problems” of rising rents and inflation.

Yet it is also true that El Parián is more active now than it has been in years. On any given evening, voices in a half dozen languages ricochet off Polpo’s hard sculptural surfaces just as they might have in the long-lost market from which the Pasaje takes its name. As eclectic in its inspirations as El Parián’s facade, Polpo speaks not only to the traditions of markets in Mexico and Europe, but also to the profound complexities that face its neighborhood in the future and the relentless tides of change that have shaped its past. Polpo in particular, though, is dedicated to the pleasures of the present—a place “to grab a bite and a glass of wine,” as Betancur says, “and move on to what’s next.” 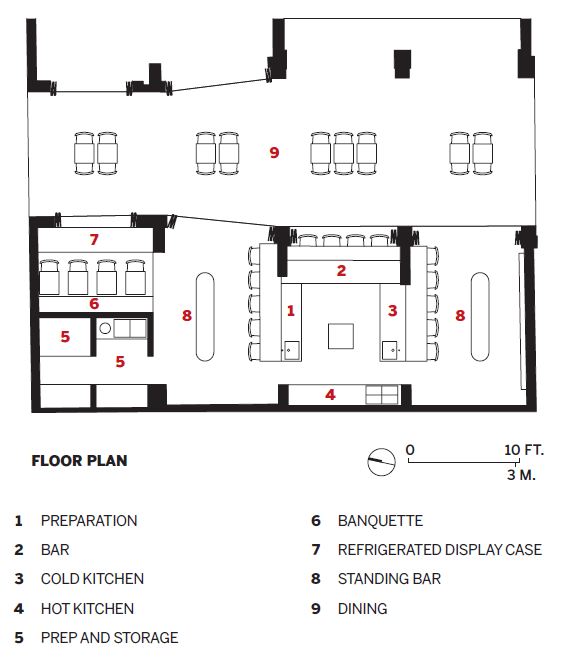