Meeker Avenue, in the East Williamsburg section of Brooklyn, New York, would not spring to mind as an ideal location for a preschool, though it cuts through a rapidly gentrifying neighborhood. Running alongside the elevated Brooklyn-Queens Expressway, the busy thoroughfare has been home to scrappy commercial and industrial businesses for more than a century. Yet in 2019, when educator Nicole Jubran saw that a dilapidated construction-supply warehouse would soon be vacated there, she realized its potential for the early-childhood facility she planned to open. The space, beneath an eight-story residential building, was affordable; it had a visible street presence, two floors, and the square footage she would need for a viable business. It was also close to mass transit, parking, and a popular public park, plusses for parents, caregivers, and staff.

Open since late 2021, City Kids education center is a breath of fresh air on the still-gritty block. Designed by architect Alexandra Barker and the all-woman team at her Brooklyn-based firm, Barker Associates Architecture Office (BAAO), the 11,000-square-foot interior—which houses a preschool, after-school, and summer day camp for 190 children—replaces the cramped bilevel warehouse with a fluid, welcoming environment, visible to passersby through a broad, glass storefront entrance.

The project was far from a simple conversion, however. The utilitarian depot in which City Kids is situated was erected early in the 20th century and later jerry-rigged to accommodate the apartment floors above, which were built in 2009. This all too typical urban pastiche presented a surfeit of challenges for the design team. Chief among them, says Barker, was the way the beams, columns, and pipes of the residential building thread through the space in the lower one, compromising ceiling heights. The deep 98-by-61-foot interior also lacked sufficient access to daylight, little helped by too few, too small windows. But, Barker adds, “the space did have great potential in terms of open, contiguous floor area that could be created on two levels.”

The brief stipulated a six-classroom preschool on the lower level and a five-room after-school center upstairs. Jubran also wanted shared spaces and support rooms, maximizing connectivity and light throughout. Working collaboratively with the client and the building’s owner (who became the general contractor), Barker and her colleagues took advantage of an existing 18-foot-high volume at the core of the warehouse to create a pair of adjoining double-story spaces on the first floor: a reception area and a central “courtyard” for the preschool classrooms. In each, playful arrays of white pendants are suspended overhead, at varying lengths, punctuating a rich turquoise ceiling, while glazed “peekaboo” apertures around and up the walls enable views and light between spaces and floors. Compensating for the lack of a plenum above the ceilings, the crew constructed one of the courtyard walls with a 19-inch cavity to accommodate mechanicals. This depth allowed the architects to create a niche for cubbies and lockers (a built-in effect they mimicked on the lower half of the opposite wall). These enchanting preludes set the stage for a series of rooms designed to foster creativity, confidence, and curiosity. Jubran, who has an aversion to the typical primary colors found in children’s facilities, believes that aesthetics and accessibility are important learning tools, and was drawn to Barker when she saw an earlier BAAO preschool on the web. Largely clad in natural maple, that older project features judicious hints of color, clear sight lines, and amusing elements, like an oversize pegboard wall. Employing impressively realistic wood-look vinyl planks instead of the real thing (for budget and maintenance purposes), Barker continues many of these strategies at City Kids—spinning straw into gold, considering the building’s drawbacks. Rather than conceal the existing structure, for instance, she celebrates such “inconsistencies” as awkward columns and low-hanging beams with curved transitions and a subtle color palette of white, petal pink, and mint. Her lighting scheme, too, defines the 8- to 9-foot-high ceilings on the two levels, with disk-like fixtures of various diameters arranged in groups above the classrooms and support spaces, providing an even luminosity that stretches into the deepest corners. More imaginative elements include decorative acoustic-felt strips on the walls that keep noise at bay, integrated nooks and benches (lined with the vinyl planks), and second-floor lockers stacked like the Manhattan skyline. Flexible rooms and spaces that flow into one another serve all age groups, furnished with contemporary-style tables that can be raised, lowered, and rolled anywhere as needed. Notable, too, are the addition of accessible, gender-neutral bathrooms. These feature residential-quality tile, stainless-steel trough sinks, and touchless faucets and dryers. Full-height doors on the stalls give older students privacy, while, for the preschoolers, low walls (with sliding doors) allow teachers to see what’s going on. The idea, says Barker, “is to make them connect to home.”

Although the pandemic stalled the project as construction was about to begin in early 2020, the team used the time to fine-tune details. Plans to replace and enlarge windows for daylight, using double-glazing, were revised to include operable units for improved air circulation. Likewise, the HVAC system was enhanced with air filters and ultraviolet purifiers.

The entire place is whimsical, without being childish—and surprisingly quiet, given its proximity to a major roadway. When Jubran set out to establish an education center, she imagined a thoughtfully prepared environment that would be both comfortable and stimulating for children of different ages—and even adults. Working with Barker and BAAO, City Kids more than meets these goals. 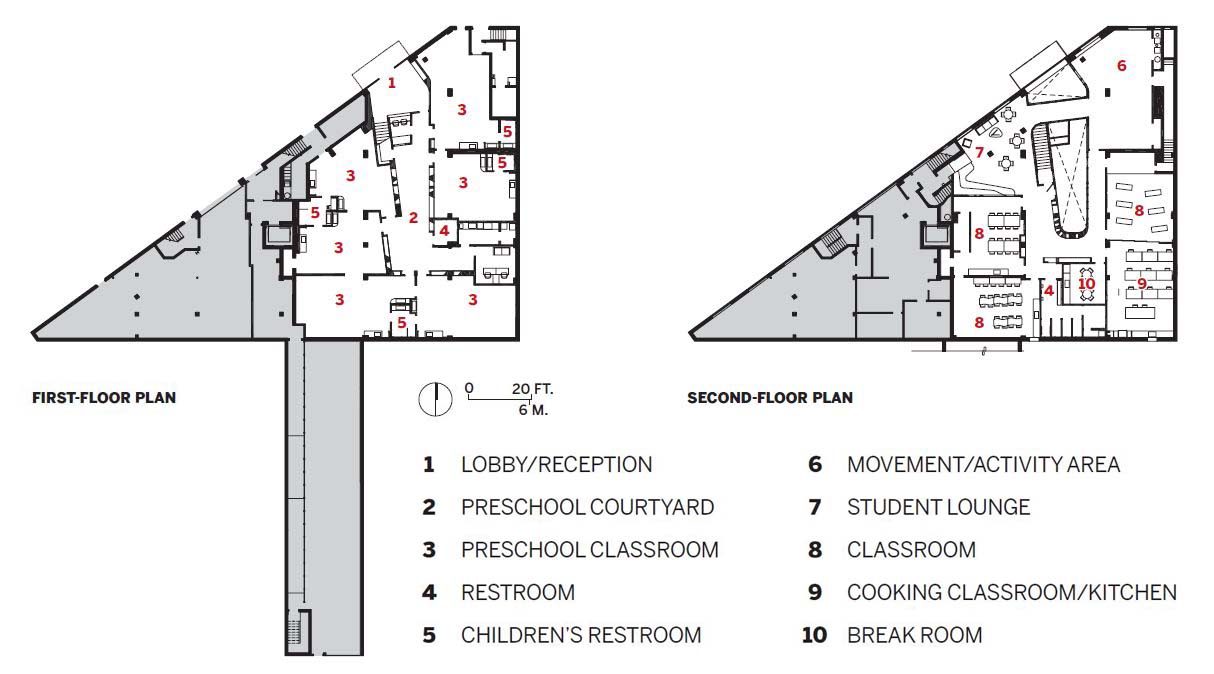