In San Francisco’s South of Market (SoMa) neighborhood, where the average price of a home is $858,000, innovative design joined creative financing to speed production of a 145-unit permanent housing complex for the formerly unhoused. “The architecture has a lot of things that are unique about it,” says Daniel Simons, principal in charge at local firm David Baker Architects (DBA), which designed the building, Tahanan Supportive Housing. “But a lot of the uniqueness is the process, the goals that were set, the financing, and figuring it all out.” Tahanan, in the SoMa neighborhood (above), has a zigzagging facade that lends variety to the long and linear structure (top). Photo © Bruce Damonte, click to enlarge.

One of the biggest barriers to successfully building low-cost housing across the U.S. is the time it takes to finance and construct such projects, with expenses rising with each tick of the clock. Two nonprofits—Tipping Point Community and the San Francisco Housing Accelerator Fund (HAF)—understood that dynamic in co-initiating this project. Kati Vastola, HAF’s operations and communications manager, says that the groups saw typical benchmarks of more than six years in planning and development at a cost of more than $600,000 per unit; that was just unacceptable in addressing the city’s homeless crisis. So instead, the two groups devised a novel financing structure that would allow for building faster and for less money and would result in a series of supportive-housing projects, with the first, Tahanan, helping to pay for the next. To mitigate the delays in obtaining conventional financing, they seeded the project with a $50 million philanthropic grant from the Charles and Helen Schwab Foundation. And, to Tahanan’s developer, Mercy Housing California, they assigned strict cost and time goals: a development limit of $400,000 per unit and a deadline for completion within three years of closing on the land.

DBA used modular construction, which helped meet these budgetary and time targets to build the six-story, 63,000-square-foot project. “Built in the factory, finished in the factory—it allows for the schedule on site to really be compressed,” says Jonas Weber, DBA project architect. The modules—pairs of 260-square-foot studios with an adjoining corridor—were built on nearby Mare Island, trucked to the site, and stacked by crane on a concrete podium. The regularity of the modules, according to Weber, is key to their success. “When you introduce variation in unit types,” he says, “you introduce possibilities for the factory to trip over its process.” Only Tahanan’s ground floor—which includes a community room, ten private counseling offices, a nurse’s room, exam room, and staff support—was built in place.

Details are vital to bringing variety to the modular building and to responding to its context. While much of the SoMa neighborhood has seen its light industry replaced with hotels, cultural venues, and other building types in recent years, the area around Tahanan’s site—a former parking lot positioned between Interstate 80 and Caltrain rails—has changed little. Two- and three-story housing sit to the south, the imposing Hall of Justice is across the street, and bail bond and law offices are to the east and west. Yet Tahanan’s design looks beyond this to the surrounding 1.5-square-mile Filipino Cultural Heritage District. DBA met with the local organization SOMA Pilipinas, which offered the architects design inspiration. Thus, Tahanan (Tagalog for “home”) abstracts Filipino culture with patterns of bamboo and handwoven mats cast into its concrete base. The apartments include amenities often lacking in supportive housing, such as complete kitchens. Photo © Bruce Damonte

Filipino influences also appear on a mega-graphic depicting Banaue rice terraces cut into the building’s rainscreen, which alternates between weathering-steel and aluminum panels. These panels saved time and labor compared with rainscreens with multiple layers of assembly. As unfinished metal, they also saved on the premium for powder coating or painting and are essentially maintenance-free. Their dot pattern provides interior light accents from windows in the stairwells and at the ends of corridors. Simons notes additional benefits of the rainscreen design. “It’s waving and undulating, like Filipino baskets,” he says. “But, also, by having panels that don’t align with one another, we were able to cover up imperfections in the modular surface.” Weathering steel and aluminum comprise the rainscreen facade (1). The building’s 145 studio apartments were fabricated in a factory (2) and lifted into place by crane (3) over a concrete podium. Photos © Bruce Damonte (1), David Baker Architects (2 & 3) On the main facade, the zigzagging rainscreen frames windows that angle views toward downtown San Francisco (away from the Hall of Justice). On the opposite side, windows face a courtyard with seating, plantings, and bike storage. Rainbow murals painted on the courtyard’s existing concrete perimeter walls narrowly made it into Tahanan’s tight budget. The project did not have enough money to pay the muralist, Wendy Heldmann. So, instead, her designs were licensed, and the crew who painted the building executed them. The courtyard faces a large communal interior space, a feature that—along with private bathrooms, full-size refrigerators, ample storage, air-conditioning, and other amenities—are missing from older single-room-occupancy hotels to which Tahanan provides an alternative. Sustainable features, including rooftop solar photovoltaics and stormwater-treatment planters, helped the project earn GreenPoint Gold designation. The community room opens on to a courtyard with seating, plantings, and bike storage. Photo © Bruce Damonte

“The dollars were spent well in terms of balancing nice units with welcoming communal spaces,” says Barbara Gualco, regional director of real estate for Mercy Housing California. “The development goals—where you have to meet a price point and within a time frame—were incredibly powerful as a construct and made decision-making much simpler.” In fact, Tahanan’s development cost came in at $385,000 per unit, well below the target. The daylit lobby is one of several generous communal spaces. Photo © Bruce Damonte

Tahanan’s model goes beyond this single project to serve the revolving fund. A 30-year lease of Tahanan’s apartments to the City of San Francisco allows for money to be invested in a new supportive-housing project, and so on. “We’re already designing the next one,” says DBA’s Simons. “They’re hopefully going to close on the property soon, and then our three-year clock will start ticking again.” 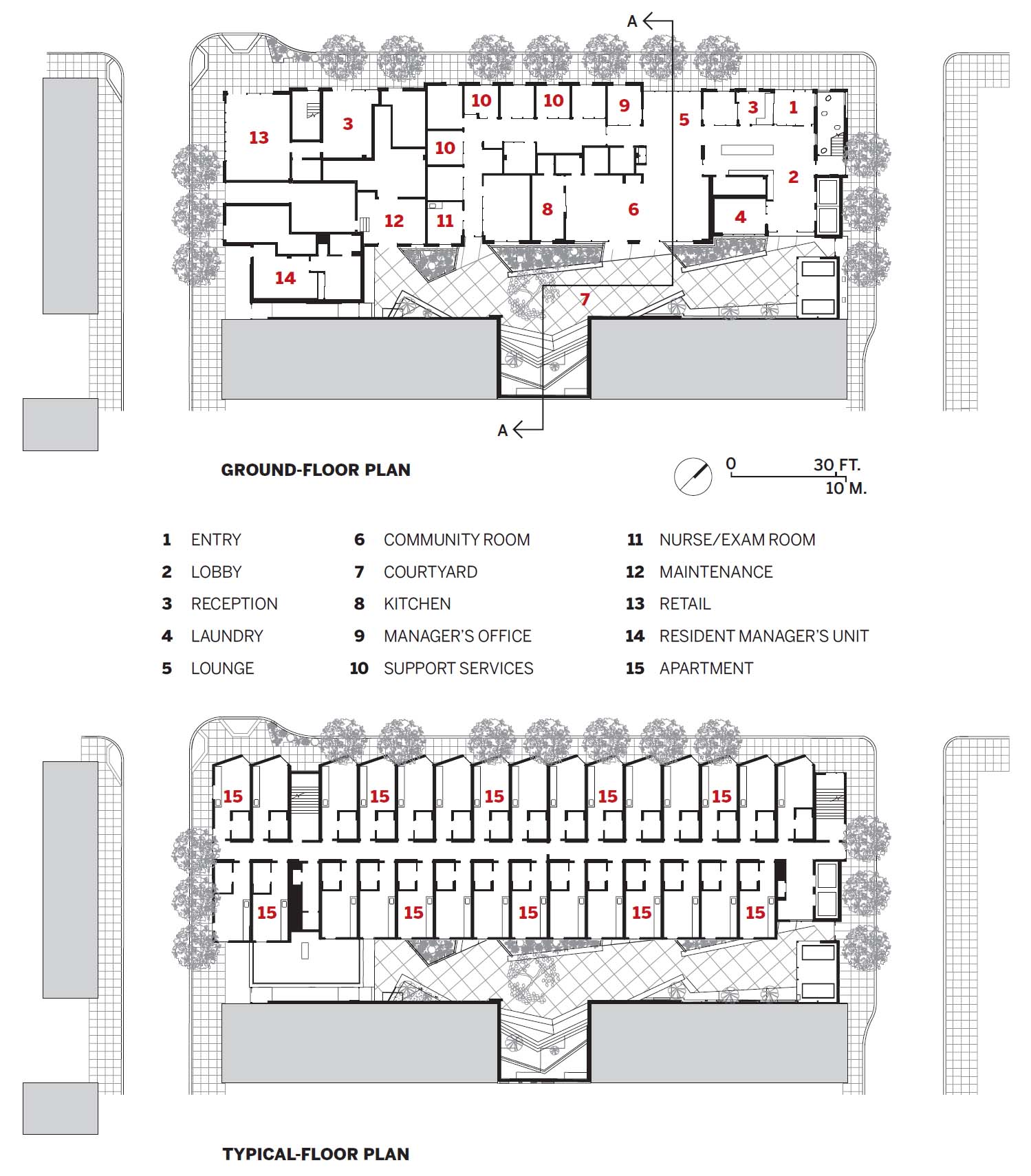 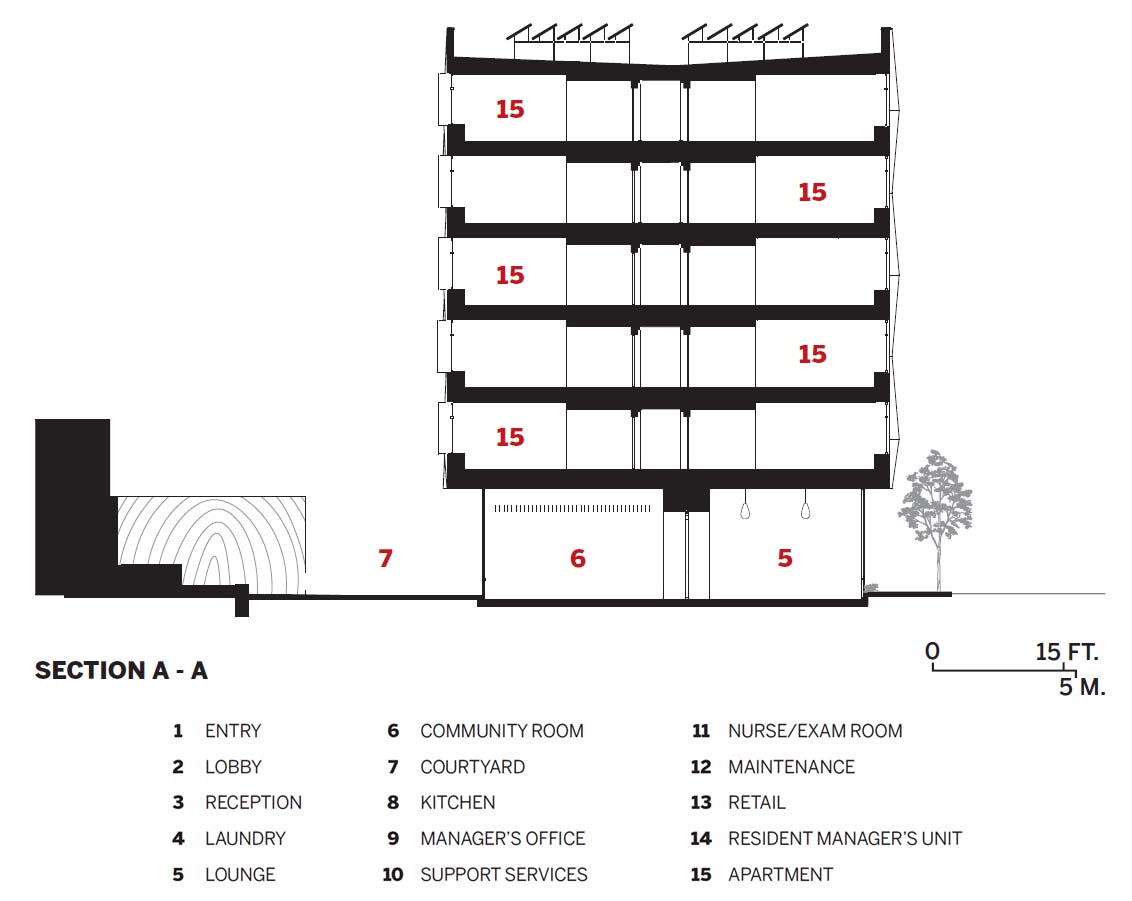