Set on a high creek-side bluff, about two miles from the beach, the main campus of Loyola Marymount University (LMU) is full of unrealized potential. The 142-acre tract on the Westside of Los Angeles has an architectural mix ranging from a neo–Spanish Colonial chapel and bell tower (circa 1954) to more modern-style structures, many from the 1960s through the ’80s. But “a lot of the existing buildings feel opaque and enclosed, instead of engaging the open space, or one another and the flow of people,” says SOM senior associate principal Carlos Madrid III. Even the “Alumni Mall”—the long grassy spine through the center of campus—lacks the overarching sense of procession it could have. But change is under way, with projects gradually modifying existing structures and introducing new ones. Most recently, two buildings by SOM—one for the university’s School of Film and Television (SFTV) and the other the open-air Drollinger Family Stage—have merged lighting with architecture to bring transparency, lyricism, and a distinctive identity to the campus. 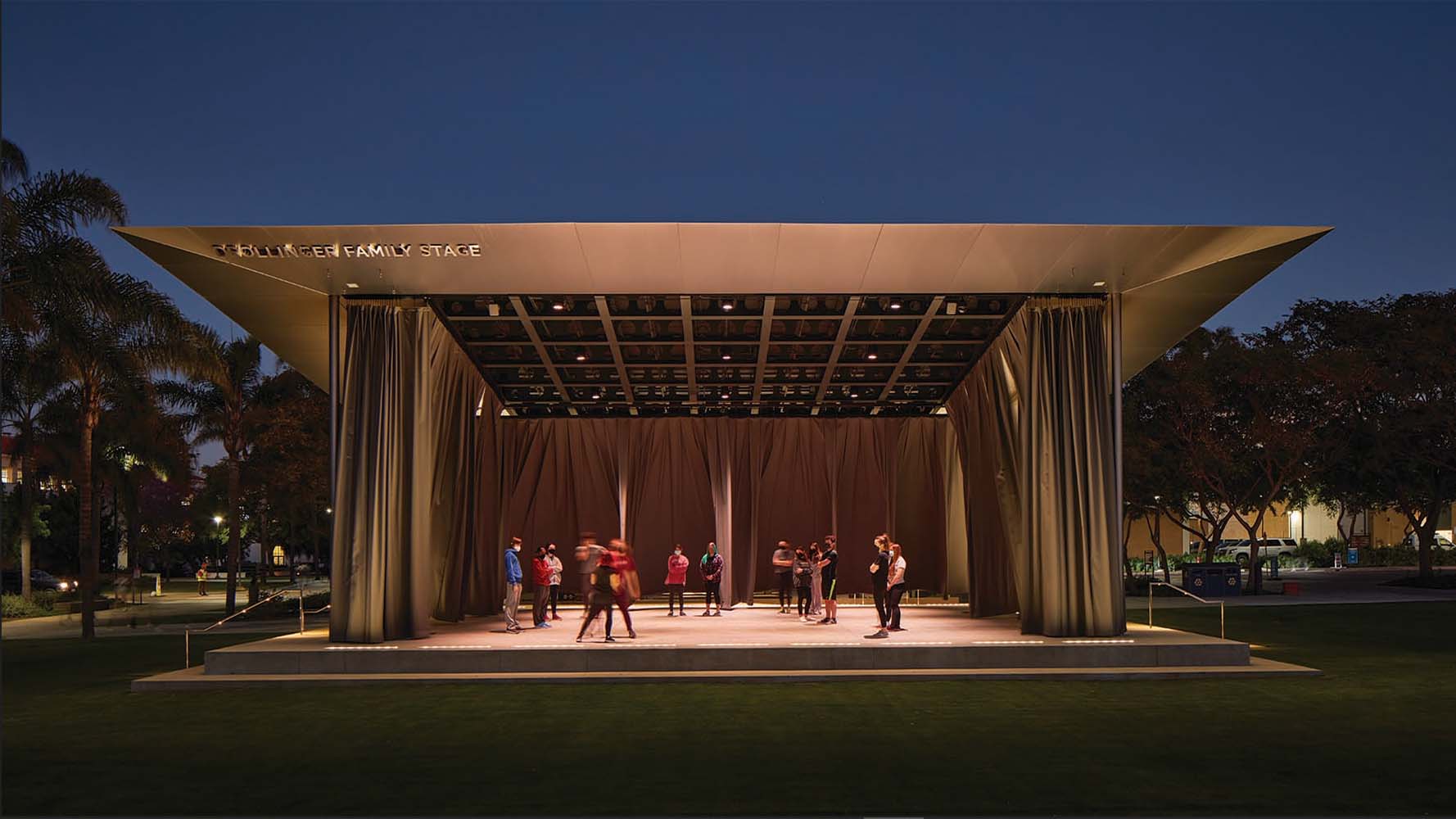 The new SFTV building has a deep yet ethereal-looking facade that seems to dematerialize, its appearance changing with sunlight and shadow or, by night, glowing from within. “After all, film and television are fundamentally about light,” points out Teal Brogden, president and senior principal at Horton Lees Brogden Lighting Design (HLB), which collaborated with SOM on both projects.

Sited along the mall, the 23,700-square-foot structure for SFTV—which includes classrooms, outdoor space, tech labs, and directing studios—is primarily a four-story bar-shaped volume with a brise-soleil of pleated white powder-coated aluminum, perforated with 1-inch holes. Between this outer veil and the building’s more solid, stuccoed face is a 10-foot-wide walkway/patio on each floor with an outdoor stairway at either end, forming an occupiable, interstitial zone that registers translucently across the facade. Compounding the layering, SOM’s building stands right in front of the School of Film and Television’s existing home, a simple, blocky volume (a walkway now runs between the two structures). A wide, rectilinear central portal cuts through the new building, leading to the older one.

Also integral to SOM’s design of the SFTV building is its 80-seat Broccoli Theater—a teaching and screening venue, named for Albert Broccoli, the famous producer of James Bond films. A clean, Minimalist rectilinear volume (with a roof terrace that’s accessible from the second-floor classrooms), this component stands in front of the sheer facade, but off to one side, rising only one story. In contrast to that luminous backdrop, the theater’s matte aluminum cladding is opaque, catching muted, shimmering reflections of light.

Inspired by SOM’s expressively layered architecture, HLB’s team responded with lighting that enhances the metaphor of the veil as an elusive cinematic “silver screen,” while celebrating—even gently broadcasting to the rest of campus—the activity behind it. HLB placed a bold but simple stripe of light—a long, seemingly continuous LED fixture—down the center of each walkway’s ceiling, extending its entire length. While providing ambient illumination, and overcoming the limitations of installing lighting in the extremely rebar-dense section of the concrete slab, these bright lines generate a horizontal rhythm that plays against the facade’s more diffuse luminosity. For the portal into the old building, the designers studded that passageway’s ceiling with a point-grid of cylindrical downlights that recall the glittering arrays of small lightbulbs on classic theater marquees. But perhaps the scheme’s most human-scaled elements are the luminaires along the entry paths and the patios out front, casual breakout areas with brilliant yellow tables and chairs. There, HLB dispensed with tall lampposts, favoring instead streamlined 3-foot-high bollards. Along with concealed handrail lighting, these were chosen for their low scale, to defer to the radiant facade.

Here, and throughout the project, HLB used dimmable warm (3000K) LEDs, with a color-rendering index (CRI) of 80+, achieving a subtle symphony in white. “When the architecture has power and clarity,” says Brogden, “it tells you how to light it.”

A short distance from the mall, the new Drollinger Family Stage has its own poetic qualities of luminous transparency. Set on a generous lawn, where seating can be arranged formally or casually, the 1,600-square-foot open-air stage has an aluminum-clad canopy overhead, with supporting columns and retractable curtains on its sides. This pavilion hosts theater, dance, and musical performance, as well as other campus events (with its stage modified as needed, including adding sprung floors). Equipped with integral audiovisual systems, the structure is reconfigurable for theater-in-the-round, proscenium, thrust-stage, and enclosed rehearsal modes. Light, both theatrical and architectural, spills through and around the open walls of the pavilion/stage onto the surrounding lawn. Photo © Dave Burk

Flush, floor-embedded uplights along the stage’s periphery accentuate the canopy’s attenuated edges, silhouettes that recall the aerodynamic precision of airplane wings. HLB’s team also designed the house lighting, while providing a grid overhead for theatrical units—though the versatile architectural lights can also double as impromptu cyclorama-type backlighting for the stage. With programmable LEDs and multiple chips providing for a vast array of colors, the options go well beyond traditional RBG to RBGW—as in red, blue, green, and white—to include pastels and other nuanced hues. There’s also flexibility to switch into a white LED classroom mode for teaching. The vivid displays cast animated reflections across the grass, bringing vibrancy to their surroundings. In different ways, the new SFTV building and the Drollinger Stage are both luminous beacons of change at LMU.

Back to Lighting Projects 2022