Many of Enrique Norten's projects pull off a balancing act between cool, rational Modernism and an acute responsiveness to landscapes and local building traditions. His plans for a Guggenheim museum in Guadalajara, for example, stack a tower of geometrically refined white boxes above a plaza, which extends'with contrasting drama'out over a ravine, thrusting visitors into the picturesque gorge.

If Norten’s work, which tends to be far less bombastic and sculptural than that of his peers, could be said to have a defining characteristic, it would be that balance between tight composition and responsive design, rather than any signature style. His Modernist forms are not imposed from above, but the product of assiduous research into the details of their sites, and his research-focused design process takes center stage in a mid-career retrospective of his work that recently opened at the Museo de Arte Contemporaneo in Monterrey, Mexico.

Norten was born in Mexico City and earned a B.A. in architecture there before doing his M.A. at Cornell University in New York. Back in his home city, Norten founded the firm TEN Arquitectos (Taller de Enrique Norten Arquitectos), where he is still principal, in the mid 1980s. In the next few years, the firm worked on a series of homes, institutions, and other projects before completing one of its best-known buildings, the Escuela Nacional del Teatro, in 1993. It went on to open a New York City office in 2001 and complete many more critically celebrated projects—from the Hotel Habita (1998), a luminous box in Mexico City, to One York Street (2008), a crystalline, high-end-residential addition to a brick 19th-century warehouse in New York. 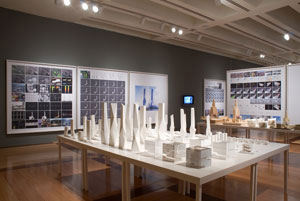 Installation view of INTENTIONS at the Museo de Arte Contemporaneo in Monterrey.

But the built projects are not the focus of the Monterrey exhibition. Titled INTENTIONS, the show, which was curated by the young Mexican curator and critic Alejandro Hernández, features hundreds of models, drawings, video, and other material related to some 30 projects orchestrated to throw visitors into the middle of Norten’s design process, putting equal weight on scrapped drafts and final plans. I recently discussed the exhibition, which runs through October, with Norten, who said that he wanted to give people a chance to see the many layers of influence that go into his seemingly hermetic final projects.

William Hanley: What narrative about your career did you want the exhibition to present to the public?

Enrique Norten: Well you know, there is never a one-liner. But very early on we decided that we did not want to make a glorious exhibition about the built work—about the work that has gotten awards, the work that has gotten prizes—and show beautiful, glossy big photographs, or that kind of stuff. We were more interested in putting out there the process of work. So we very early decided that we would just bring out our guts and put them out there.

WH: How did the curator convey that with the installation?

EN: The first thing that is very striking is that you see hundreds and hundreds of models. It’s the work that really occupies the tables in our studios. There are physical models, digital models, and drawings that were tested and disqualified very early in the process.

We wanted to basically show the complexity of doing architecture. People always say, “Oh how did you get inspired for this beautiful work,” but it is not about inspiration. It’s a very complex and analytical work that goes into every one of the projects.

WH: Has your perspective on your own work changed after seeing it in the exhibition?

WH: Were you surprised by any part of that evolution?

EN: You obviously notice how the work gets much more environmentally conscious. Environmental issues have always been a concern, but they have been different. Most of our early work had been done in what I would say are much poorer countries, and therefore the environmental issue was there because it was the only way of really reducing costs.

It’s very hard to see those things when you only see one project at a time. Only in an exhibition like this can you see that work of history, the work of time, through the evolution of a firm.