Made of the Right Stuff?

By Paula Melton
As market demand for healthier building products is reaching critical mass, a whole new industry sector is responding with more powerful tools for assessing and improving materials. Some of the new programs help manufacturers provide high-quality information while leaving less room for them to make questionable marketing claims. Others offer a framework for developing better products but don't necessarily require public disclosure of ingredients. Both types will likely be recognized in LEED v4, an update to the popular green-building rating system slated to be voted on by members of the U.S. Green Building Council (USGBC) in June. 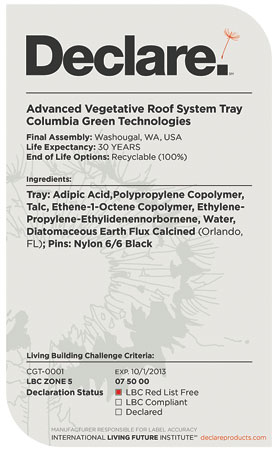 Nearly all these efforts have emerged as a collaboration among green-building advocacy groups, construction and design professionals, and manufacturers. “We were talking at manufacturers previously,” quips Brendan Owens, the USGBC's vice president of LEED technical development. “When we started talking with manufacturers, many problems fell away.”

The Health Product Declaration (HPD), officially released in mid-November, provides a standard format for ingredient disclosure. The development effort was initiated by the Healthy Building Network and the publisher BuildingGreen (the editorial partner of RECORD'S sister publication GreenSource). Architecture firms, property owners, and product manufacturers also participated. The aim of the HPD is to get beyond the cherry-picking style of labeling (“BPA-free” or “50 percent recycled content”) in favor of a complete health-hazard list.

The similar Declare product database, launched in October, is a program allowing manufacturers to voluntarily publish ingredients, sources, and manufacturing locations for their products. It can be used by anyone, but its current focus is on “red-list-ready” products for projects pursuing Living Building Challenge certification. A red-list-ready product is one that contains no ingredients from the stringent rating system's hazard list, such as PVC and added formaldehyde. Ingredients and life-cycle information are also displayed on an at-a-glance product “nutrition label.”

One concern is the potential for information overload. Is it really an architect's or specifier's job to scrutinize every ingredient? “I don't think everyone needs to become an industrial hygienist or a Ph.D. candidate in chemistry,” says Perkins+Will associate principal Peter Syrett. “But we do need more awareness of what products are made of.”

Even if most building professionals don't have the time or expertise to process the data themselves, it's important for the information to be available, argues Mark Rossi, policy director of Clean Production Action, a green-chemistry working group. Consumers may not have extensive knowledge of the ingredients in cleaning products or shampoo, he says, but if the information is public, experts can serve as “a lens for interpreting that information.”

Similarly, Owens views disclosure as the next step in information sharing. With HPDs and Declare as public data sources, anyone with the right expertise can filter and share information in an accessible way. Owens predicts that such data will eventually be incorporated into building-information-modeling software.

Now that the concept of disclosure is gaining market traction, more manufacturers are looking for ways to clean up their products. One established framework for doing so is Cradle to Cradle (C2C), which just released its 3.0 version. C2C is a “multi-attribute” certification that helps manufacturers improve on a range of environmental and health impacts. It is distinguished by a focus on gradual removal of all toxic ingredients.

What C2C does not require is public disclosure of ingredients. That may seem odd to people following the development of LEED v4, which in its current draft recognizes C2C for encouraging transparency. LEED's proposed disclosure credits are meant to push manufacturers to assess their products, even if they're not ready to make that information public. “We want to reward [manufacturers] for that behavior,” says Owens, adding that subsequent versions of LEED will not likely recognize C2C as a transparency tool unless it is modified. William McDonough, cofounder of C2C, wants the program to move toward more disclosure. “Transparency is important,” he said at a November press conference. “We've always had that as an ambition.”

A newer framework for continual product improvement–and one that's more likely to be accessible to smaller companies–is laid out in The Guide to Safer Chemicals, recently published by Clean Production Action. Like C2C, the guide recognizes multiple levels of improvement leading to a nontoxic ideal. Unlike C2C, it evaluates only toxicity (not environmental impacts like carbon or energy), but it includes public disclosure of ingredients and manufacturer support for further market innovation.

With so many programs in play, it can be easy to spend time discussing each system's strengths and weaknesses, but Syrett says that is a distraction. “I look at the work of the HPD and other endeavors as part of a larger effort to build better and smarter,” he says. “If we really carry this forward, we will have more jobs, a better planet, and healthier humans.”