Fashion-loving visitors to Barcelona flock to two destinations. Many go to the grand thoroughfare Passeig de Gràcia to browse the outposts of international fashion houses. But more adventurous trendsetters navigate through the cobblestone ways of the El Born neighborhood, whose narrow medieval streets are dotted with the storefronts of native designers little known outside of Catalan circles. Here local talents sell avant-garde duds in their shops—and sew them in the back rooms. 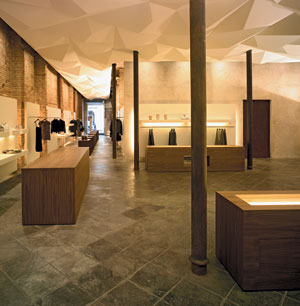 The Korean-born, Barcelona-based fashion designer Julie Sohn falls somewhere between these two worlds. Her simply adorned outfits possess a haute-couture elegance reminiscent of Max Mara, but are as wearable as a T-shirt ripped from the racks in El Born. Fittingly, her new showroom is located several blocks away from the Gràcia’s brand names. And its design by CCT Arquitectos, which sets a sculptural dropped ceiling inside a raw historic interior, combines elegance with edginess.

Sohn, who is married to CCT principal Conrado Carrasco, helped launched the architecture firm in 1997. Carrasco and his partner Carlos Tejada inaugural project was Sohn’s first boutique, completed the following year. Carrasco says this latest effort is “totally different”: “The first one was a very conceptual shop, minimalist and Brutalist at the same time. This new shop has the image of a container.” Sohn says she had nothing to do with the change of ambience, adding “I just told them that I didn’t want white walls, and the total meters of shelves and rails and nothing else.”

The architects chose the ground-floor commercial space of an early 1900s apartment building to renovate into the showroom, a decision they attribute to the good rent and the 3,760 square feet necessary to meet Sohn’s requirements.

The store flows around a central multifamily entry. While one arm of this U-shaped space terminates in a shop window, the other serves as the store entrance. Here, customers are introduced to CCT’s container concept, in which the architects rehabilitated the brick walls, barrel-vaulted ceiling, and concrete floors, and pulled their interventions away from the historic frame. In the case of the entrance, a steel-mesh gangplank traverses a 5-foot-tall basement, flanked by glass sheets onto which a water system releases a constant drip. The shimmering surroundings promise to transport the shopper from urban grit to fashion wonderland, and act as a light monitor for the cramped basement; the display window opposite the entry also rises as a double-height volume in order to draw daylight into the subterranean stock room.

Once inside, visitors enjoy a catwalk experience. Rather than hide the old bones it had salvaged, CCT mounted backlit, white-lacquered volumes to the structural brick wall to serve as hanger and shelving units. The architects liken these display elements to giant picture frames, which nip the corridor’s waistline and gently push the visitor into the space. To draw one’s eye down the corridor, CCT divided it into two by snaking a long, folded Cor-Ten steel display table down the center.