The Casa das Mudas Centro das Artes, on the Portuguese Island of Madeira, crowns a basalt promontory 600 feet above the Atlantic, but from its entry atop the precipice, the building disappears. Toward the cliff’s edge, past the simple 16th-century house that gives the art center its name, an expansive, inaccessible platform of basalt starkly frames the sea and distant horizon. This stone surface bears what appear to be runic incisions, but are actually rows of planters, and the deeper erosions formed by sunken patios and light wells. Visitors arriving by car catch another plunging glimpse of the sea as they ramp down into the garage under the entry terrace. 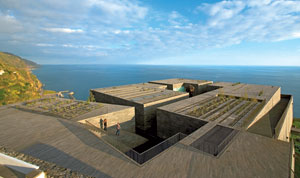 From the approach by car or on foot, the art center unfolds as a labyrinthine excavation of this stunning man-made plateau. The route into the building descends from the entry terrace (or rises from the garage) to a central patio, open to the sky, where the lobbies of the new structure’s three wings open to a changing spatial choreography, masterfully composed by local architect Paulo David, of narrow, descending stair shafts, expansive halls, and sudden exterior views.

Three hundred miles from the African coast and 625 miles southwest of Lisbon, this lushly vegetated volcanic island, bathed by the warm currents of the Gulf Stream, has been a crossroads of trade among six continents since the 15th century.

Accessed from the central patio, the building’s various sections—a museum wing with a suite of galleries, a multifunctional auditorium, a library-workshop-classroom wing, and a bookshop—can function independently or together. Relying on a mixed structure of concrete with steel beams for large spans, David was able to create a descending chain of four double-height galleries in the museum wing, connected by narrow runs of stairs in the thick walls between the exhibition spaces—alternating the sense of compression and release. Introducing daylight into two of the galleries through clerestory windows and deep wells that illuminate even the lowest level, he opened the remaining galleries to heart-stopping views of the coastline below. The architect finished the spaces simply with white walls, floors of Brazilian garapa wood, and strips of warm fluorescent-tube lighting (modifiable according to exhibition needs), and in the stairs, tube-lit, carved Corian handrails. Architects Telmo Cruz, Maximina Almeida, and Pedro Soares, practicing independently from David’s office, designed the interior of the 200-seat auditorium with warmly upholstered seating and latticed wood walls.
KEYWORDS: Portugal