William Hanley
No Comments
Photo © Robert A.M. Stern Architects “This is a classical skyscraper without the rhetoric of classical language,” says Robert Stern of his Comcast Center in Philadelphia. In its ten-year history, the Vincent Scully Prize has been awarded to few practicing architects. The award honors individuals who have made noteworthy contributions to architectural practice—in addition to scholarship and criticism—but the majority of winners have been academics, policymakers, or patrons. Preservationist and Robert Moses nemesis Jane Jacobs was an early winner. The Prince of Wales and the Aga Khan have also taken home the prize—as has its namesake, Yale art-history professor emeritus
Read More

William Hanley
No Comments
Photo © Eileen Barroso / Courtesy Columbia University “It was out of a fascination with what the digital revolution is doing about collapsing the distance between the designing board—the designing computer—and the site of fabrication,” says Barry Bergdoll of his motivation for organizing Home Delivery. The Museum of Modern Art has turned an empty lot on West 53rd Street in Manhattan into a playground of innovative building technology. Before it becomes the ground floor of a tower designed by Jean Nouvel, the skyscraper-flanked site is playing host to five full-scale prefabricated homes designed by contemporary architects. Jeremy Edmiston and Douglas
Read More

William Hanley
No Comments
Heidi Zuckerman Jacobson, director of the Aspen Art Museum in Aspen, Colorado, considers space the only thing holding her institution back from an ambitious long-term goal. “We want to become the best non-collecting museum in the world,” she says. Photo © Karl Wolfgang / Courtesy Aspen Art Museum Aspen Art Museum board of trustees president Nancy Magoon, museum director Heidi Zuckerman Jacobson, and Shigeru Ban. “The museum is looking for a unique gathering space,” says the architect. Founded in the late 1970s in a converted hydroelectric plant, the museum currently has 7,000 square feet of exhibition space, which the director
Read More

The Sterling and Francine Clark Art Institute has selected Selldorf Architects to renovate its museum in Williamstown, Massachusetts.

James Cutler, FAIA, is known for superbly wrought wood structures, including buildings on the Gates family compound in Medina, Washington (1997). 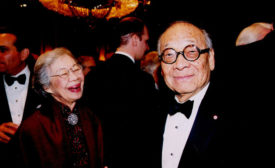 No Comments
Shortly after the 2004 AIA Accent on Architecture dinner in Washington, D.C., editor in chief Robert Ivy visited I. M. Pei at his office in Lower Manhattan, where they discussed the evolution of Pei’s design thinking, the importance of working abroad, and his current slate of projects.
Read More

Three years ago, 1994 Rome Prize in Architecture winner Garrett Finney was happily designing furniture in New York City when a former classmate from the Yale School of Architecture called him to see if he was interested in becoming part of a new NASA program.

Within the span of a few years, Marcel Wanders has made the transition from brazen, young upstart, with his novel designs for the Dutch avant-garde label Droog, to become a leading figure in contemporary design, all the while creating innovative, often quirky objects.

Initially an artist who worked in the humble mediums of dust and rice paper, Ayala Sefarty’s multihued, multifaceted design career started while she was snorkeling in the Red Sea.

Thanks to the efforts of Elizabeth Barlow Rogers, Frederick Law Olmsted’s vision for New York’s Central Park lives on for future generations.

Since early 2020, it seems as if the world has changed drastically. The COVID-19 pandemic has certainly changed how we work, play, and live. Design professionals have experienced this shift profoundly. When designing interior spaces, design professionals must consider aesthetics, cost, and energy efficiency, but also how their choices impact the health and well-being of occupants. While this has been the case for some time, the COVID-19 pandemic has underscored the importance of designing healthy spaces.