Elizabeth Lunday
No Comments
It’s hard to imagine a battle raging where mariachi bands now play and tourists sip margaritas. Yet in 1836, the 187 defenders of the Alamo, including Davy Crockett and Jim Bowie, fought and died near the spot where later generations would build the San Antonio Riverwalk. Holes from bullets and cannon blasts remain in the old fort’s walls as a reminder of the Mexican forces’ siege. Photo: courtesy the Alamo It’s not these battle scars that have preservationists worried—they’re part of the building’s history—but they are concerned about the effect of 2.5 million visitors a year. Although asked not to
Read More

David Sokol
No Comments
Photo: courtesy KPF Colleagues of Kohn Pedersen Fox managing partner Gregory Clement III, FAIA, were hit hard when they learned of his death on April 11. “Toward the last year he was traveling a lot,” says senior associate principal Nick Dunn, AIA, “so not to see him for a while wasn’t out of the ordinary.” But in addition to snagging new business or navigating a bureaucratic minefield, Clement, a naturally charismatic 56-year-old, was fighting a two-year battle against melanoma. Clement joined KPF from I.M. Pei & Partners in 1984, and Dunn recalls that the two immediately clicked as a
Read More

Kurokawa's Capsule Tower To Be Razed

Kisho Kurokawa can’t seem to catch a break these days. Just days after the Japanese architect lost his bid for the governorship of Tokyo, the Nakagin Capsule Tower, his best known building and one of the few built examples of the Metabolist movement, was given a date with the wrecking ball.

Less than two months after issuing a request for qualifications, as ArchRecord.com reported on March 19, the Barnes Foundation today revealed its shortlist of architects for a new museum and educational facility on Benjamin Franklin Parkway in Philadelphia.

James Murdock
No Comments
Editor’s note: You may read the news digest below or listen to it, plus other news headlines from ArchRecord.com, as a podcast below: Click the play button to begin | Click here to download Herzon & de Meuron were tapped to design a new football stadium for the coastal city of Portsmouth, England—that’s British football, by the way, known only in the U.S. as soccer. “We’ve taken the ingredients of the city and mixed them up—the docks, the sea, the transport, a city oriented to labor—and we’ve brought football into that,” Jacques Herzog told the U.K.’s Financial Times on April
Read More

James Murdock
No Comments
Photo: Courtesy Chris Schultz, AIA The 2007 National Convention and Design Exposition of the American Institute of Architects (AIA) opens next week in San Antonio. In this six-minute podcast, AIA San Antonio chapter president Chris Schultz, AIA, chats with McGraw-Hill Construction’s news director, Heather Hatfield, about how his organization is gearing up for the event. Local AIA chapters are responsible for organizing galas as well as tours of their cities. In this case, AIA San Antonio is offering more than 100 tours that highlight everything from the Alamo and other historic Spanish missions, to the dance halls of Texas.
Read More 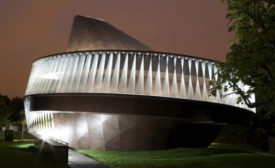 James Murdock
No Comments
Architectural illustrator David Macaulay and Richard H. Driehaus, the philanthropist and preservationist, were feted last night with Soane Foundation Honors. These awards recognize individuals who carry on the legacy of Sir John Soane, a visionary British architect who practiced in the late 1700s and early 1800s. Macaulay, who was awarded a MacArthur Foundation “genius” grant in 2006, is best known for his children’s books including Cathedral, Building Big, and The Way Things Work. He has also hosted PBS television series based these books. Macaulay teaches illustration at the Rhode Island School of Design, where he received his degree in 1969.
Read More

Barbara J. Saffir
No Comments
The American Institute of Architects (AIA) has joined a coalition of more than 60 business groups attempting to repeal a little-known but far-reaching tax law called Section 511. Passed last year, the provision requires federal, state, and some local governments to withhold 3 percent from virtually all government contracts to help cover the contractors’ federal taxes. Included in the Tax Increase Prevention and Reconciliation Act of 2005, which aimed to cut taxes and boost federal revenue, Section 511 applies to contract payments beginning in 2011. Proponents say it will help the Internal Revenue Service collect taxes and help to recoup
Read More

Diversity Slowly Increasing Within the Profession

The complexion of America’s architects has been a subject of introspection and discussion since at least 1968, when Whitney Young, Jr., president of the National Urban League, chastised attendees at the AIA’s national convention for the scarcity of African-American and women practitioners.