James Murdock
No Comments
For far too long, most publicly funded housing for seniors and the disabled has bordered on being dull, if not downright dismal and “institutional.” But thanks to architects who are lavishing the kind of thoughtful design attention hitherto rarely seen in such developments, and clients who are increasingly willing to take a chance on them, even some publicly funded projects are breaking the mold. Rotschild Doyno’s seniors complex. Rendering: Courtesy Rothschild Donyo Victor Regnier, FAIA, a University of Southern California professor who specializes in seniors housing design, is currently writing a book on the subject—timely, given the growing demand for
Read More

James Murdock
No Comments
Editor’s note: You may read the news digest below or listen to it, plus other news headlines from ArchiecturalRecord.com, as a podcast by clicking this link. Click the play button to begin | Click here to download Daniel Libeskind can’t seem to get enough of Colorado—or is it the other way round? Although the architect of the Denver Art Museum and the Museum Residences has his local critics, he’s working on a third project there: an as-yet-unnamed, 56-unit condominium development in Eagle County, roughly two hours west of Denver. Rick Mueller, the developer of this $125-million scheme, is banking on
Read More

James Murdock
No Comments
It wasn’t a good year for the Paul Rudolph Foundation. In 2004, Ernst Wagner, who established the foundation, took a nasty fall in the Manhattan town house that Rudolph designed for himself and Wagner in 1989. His injury followed the departure of the foundation’s director, who left due to a budget shortfall. Photo: © Chris Mottalini Nepal Asatthawasi stands amid the rubble of Paul Rudolph’s Michaels House in Westport, Connecticut. Wagner and the foundation recovered, but today the organization faces a new crisis as Rudolph’s buildings are endangered by a storm of real estate pressure and Rudolph’s association with the
Read More

James Murdock
No Comments
When New York City Mayor Michael Bloomberg unveiled PlaNYC in April, the press focused on just one of its 127 proposals for helping the city grow in an environmentally sustainable manner: a “congestion charge” applied to motorists in Manhattan’s key business districts. Bloomberg made headlines again this week when he called for replacing the city’s entire taxicab fleet with hybrid vehicles that pollute less. But there’s a lot more to PlaNYC than automobiles. “It’s the other 126 proposals that are going to have an effect on all of the design professions,” observes Robert Yaro, president of the Regional Plan Association
Read More

Sam Lubell
No Comments
Homeowners and municipalities in Louisiana are encountering serious funding roadblocks as they continue to rebuild. The biggest obstacle is the Robert T. Stafford Disaster Relief and Emergency Assistance Act, which governs how the Federal Emergency Management Agency (FEMA) administers aid programs. The Stafford Act is a well-intentioned 1988 law designed to reduce fraud. It requires local governments to advance federal money for infrastructure repairs. Although the act promises they’ll be reimbursed later through a “match-share” program, most municipalities are unable to afford the up-front costs. Many also criticize the law for requiring what they describe as complicated, inflexible worksheets that
Read More

James Murdock
No Comments
New York governor Eliot Spitzer announced yesterday that the final $2 billion in disputed insurance claims over property at the World Trade Center have been resolved, clearing the way for more construction. The exact amount that seven insurers were to pay to Silverstein Properties, which leased the Twin Towers, and the Port Authority of New York and New Jersey, which owns the site, had remained in dispute until the May 23 settlement. The nearly six-year delay had held up financing for Silverstein to construction Towers 2, 3, and 4 along the eastern portion of the World Trade Center site. The
Read More 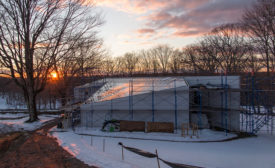 James Murdock
No Comments
The American Institute of Architects (AIA) named three recipients of the 2007 AIA/HUD Secretary’s Housing and Community Design Awards. This awards program, created by the AIA Center for Communities by Design and the AIA Housing Committee in partnership with the U.S. Department of Housing and Urban Development, showcases the best housing in three categories. This year’s winning projects are: El Carillo Housing Authority, designed by Cearnal Andrulaitis for the City of Santa Barbara Housing Authority, which was recognized for excellence in affordable housing; Salishan Neighborhood Revitalization, designed by Torti Gallas & Partners for the Tacoma Housing Authority, which was recognized
Read More
Previous 1 2 … 394 395 396 397 398 399 400 401 402 … 408 409 Next
Subscription Center
More Videos