C. J. Hughes
No Comments
In recent years, as many major U.S. architecture firms expanded internationally, they often bypassed Latin America in favor of Europe, China, and the Middle East. Gradually, though, that may be starting to change, as architects open offices and enlist for projects in Central and South American countries, where population and economic growth have been strong in recent years. Image courtesy Perkins Eastman The 12-story Grupo Eljuri Building, in Ecuador, was designed by Perkins Eastman. Even as financial troubles mount around the world, and increasingly put some Latin nations at risk, there’s a sense that much of the region, which has
Read More

Is the Dubai Bubble Starting to Burst?

C. J. Hughes
No Comments
Dubai has attempted to set itself apart with the world’s tallest building (Burj Dubai) and largest urban development (Dubai Waterfront). But in terms of fallout from the current economic crisis, the Middle Eastern city may not be so different from the rest of the world after all. Photo ''Mark Horn The global credit crunch is affecting projects in Dubai. In recent weeks, delays have beset several massive projects there, according to several architects working in the area, and articles in The National, a United Arab Emirates newspaper. Dubai Waterfront, often referred to as Waterfront City, the 1.5-billion-square-foot development master planned
Read More

C. J. Hughes
No Comments
Image © Cook+Fox; courtesy dbox for Cook+Fox National Geographic Television is featuring the Bank of America Tower (top image, right of center) in an upcoming show. Designed by Cook + Fox, the tower will be New York City's second tallest skyscraper. New York’s second tallest skyscraper is getting its own television show, at least for one evening. On Thursday, at 9:00 p.m. Eastern time, National Geographic Television will air a one-hour documentary about The Bank of America Tower, a 54-story glass-and-steel high-rise designed by Cook + Fox that is nearing completion in Midtown Manhattan. At about 1,200 feet (the building
Read More

C. J. Hughes
No Comments
Construction activity is falling fast and will head down again next year. The rate of decline could slow, but only if the government bank rescue and planned economic stimulus work. That’s the discomforting scenario described by McGraw-Hill Construction, the parent of ENR and Architectural Record, during the Outlook09 Executive Conference in Washington, D.C. on Oct. 23. Image courtesy McGraw-Hill Construction The construction industry is in 'retrenchment,' says Robert Murray of McGraw-Hill Construction. Construction starts are on pace to tumble to $555.5 billion in 2008—a 12% drop from the previous year. Steady declines will continue through 2009, dropping another 7% to
Read More 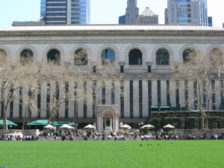 To boost the “public” aspect of its main Midtown branch, the New York Public Library has enlisted the services of Norman Foster.

Shopping Malls Not Below Libeskind's "Dignity"

After a decade of creating jutting projections for museums, Daniel Libeskind has attempted to redefine the look of another institution: the shopping mall. Called the Westside Shopping and Leisure Centre, the low-slung 1.5-million-square-foot facility in Bern, Switzerland, is the first project of its type for the New York-based architect. It opened on October 8.

In Manhattan, a Bittersweet Grand Opening at Columbus Circle

Truckers hauling lumber and lobsters from Canada may soon have a better first impression of America, if entering at Calais, Maine.

We will discuss a variety of products that provide earthquake-ready solutions from stairs to expansion joint covers that also offer aesthetic appeal and succeed in the overall design vision for both commercial and residential building designs.