Jenna M. McKnight
No Comments
The two-year-old, Richard Meier-designed Ara Pacis museum in Rome may face the wrecking ball if the city’s new leader has his druthers. Gianni Alemanno, who this week became Rome’s first right-wing mayor since Mussolini, says the building is “to be scrapped,” although he didn’t indicate when, according to Reuters. The glass, marble and steel building—completed in 2006 in the historic city center—houses the 2,000-year-old Ara Pacis altar, which commemorates the pacification of France and Spain. The museum’s design has incited critics; a former culture minister declared the building “an indecent cesspit by a useless architect,” according to an article in
Read More 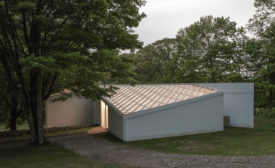 Getting a close-up look at Philip Johnson’s Glass House, which was opened to the public last summer, has not been so easy.

Jenna M. McKnight
No Comments
The Foster + Partner-designed Terminal 3 at Beijing Capital International Airport opened Friday, reported the Associated Press. Six airlines have started flying into the 14 million-square-foot terminal, with other airlines to follow in March. The glass-and-steel structure, touted as the world’s largest airport building, is the centerpiece of a massive development project for the 2008 Beijing Olympics, which begin Aug. 8. The terminal was designed and constructed in four years and cost a reported $3.65 billion. “This new terminal is the largest and most advanced airport building in the world – a celebration of the thrill and poetry of flight,”
Read More

Young members of two New York City-based firms faced each other in an arctic-themed model-building competition at a Brooklyn concert hall last night.

University of Toronto Multifaith Centre for Spiritual Study and Practice

Jenna M. McKnight
No Comments
' Jenna M. McKnight Phil Bernstein is vice president of AEC Industry Strategy and Relations for Autodesk. He formerly was an associate principal at Cesar Pelli & Associates and has a master's degree in architecture from Yale University. Listen as he discusses his company's ongoing collaboration with the U.S. Green Building Council to develop technology that aids in green design and construction. Their research, presented at Greenbuild 2007 in Chicago, could eventually yield a sustainability analysis "dashboard" that works in tandem with the Revit platform and provides users with graphic feedback about the impact of design decisions on a project's
Read More

Is the Future Brighter for Destiny USA?

Jenna M. McKnight
No Comments
After some highly publicized fits and starts, developer Robert Congel’s Pyramid Companies quietly started construction in late July on a 1.3-million-square-foot expansion of the Carousel Center mall in Syracuse, New York. It is intended to be the cornerstone of Destiny USA: a 75-million-square-foot retail, hotel, and entertainment complex touted as the world’s most sustainable project. Hear more about Pyramid's vision for Destiny USA and see additional images in an audio-slideshow. (5:00). Image: Courtesy Pyramid Companies Despite delays, Pyramid Companies has high hopes for Destiny USA. Related Links: One of Largest Projects in U.S. History in Jeopardy Congel is moving forward
Read More