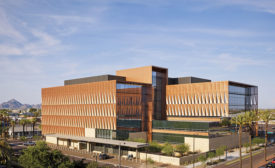 The University of Arizona Cancer Center

A Place in the Sun: A high-performance building in the desert serves as a therapeutic refuge for cancer patients.
Jenna M. McKnight
No Comments

Situated in the Sonoran Desert and ringed by mountains, Phoenix can be an inspiring but difficult place to create architecture. 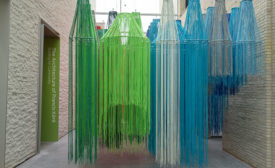 A firsthand look at how Diébédo Francis Kéré has used his architecture to transform his rural village.
Jenna M. McKnight
No Comments

It was late morning in Gando, a rural community in the West African country of Burkina Faso, and the fierce sun was beating down on the arid, ochre-colored landscape.

Jenna M. McKnight
No Comments
Bittertang's "Walls of Wax" is this year's BOFFO Building Fashion installation, located at Pier 57 (11th Avenue and 15th Street) in Manhattan. It features menswear designer Michael Bastian’s fall/winter 2013 collection. Ever since launching their design firm Bittertang six years ago, Michael Loverich and Antonio Torres have cultivated a reputation for their use of peculiar materials. For a 2010 sukkah exhibition in Manhattan’s Union Square, the duo created an inflatable vinyl blob filled with moss and eucalyptus leaves. For a 2011 pavilion on Governors Island, they crafted walls out of nylon stockings stuffed with bark and constructed a roof out
Read More

Why the Lack of Black Students?

Growing up in Miami, Candace Hoskins was always drawn to the arts. Her interest deepened at Design and Architecture Senior High School, a premier magnet school with a diverse student body.

Jenna M. McKnight
No Comments
Photo courtesy Metro LA Metro has hired Grimshaw and Gruen to design a master plan for Union Station and the surrounding area. It’s official: Grimshaw Architects and Gruen Associates will design the master plan for Union Station and the 40 acres surrounding it. The board of directors for the Los Angeles County Metropolitan Transportation Authority voted today to award a contract not exceeding $4.15 million to London-based Grimshaw and LA-based Gruen—one of six final teams that were vying for the high-profile commission. Related links In Los Angeles, Grimshaw and Gruen on Track to Win $4 Million Union Station Contract The
Read More

Cabins in the Sky: For a rustic retreat in Baja’s wine country, Gracia Studio perches a series of cubes on a hill, offering panoramic views of the fertile valley below.
Jenna M. McKnight
No Comments

Sun-splashed beaches have long been the main draw for vacationers in Baja, Mexico.

Jenna M. McKnight
No Comments
What started in 1971 as a small stand in downtown Seattle has evolved into a global enterprise. Today, Starbucks, a publicly traded company, has more than 17,000 stores in 58 countries, from Malaysia to Norway, and earned $11.7 billion in revenue during its last fiscal year. Its cultural contribution is most profound in the United States, where it popularized the Italian coffeehouse tradition yet gave it an American twist, offering gussied-up espresso drinks to stay or to go. A Starbucks pit stop is now a daily ritual for many. The retailer's shops often share a uniform look. Still, Starbucks has
Read More