Articles by Clifford A. Pearson

Cambridge, Massachusetts
Clifford A. Pearson
No Comments
Run by a university and a laboratory with a legacy of Cold War research, a program's new home is both inviting and secure.
Read More

Track Star: ZGF's renovation of King Street Station revives a faded landmark while positioning the city for an integrated transit future.
Clifford A. Pearson
No Comments

Although just 1,800 Amtrak passengers use it each day, the recently renovated King Street Station in Seattle serves as a landmark and urban catalyst at the junction of several changing neighborhoods.

Clifford A. Pearson
No Comments
By Clare Jacobson. Princeton Architectural Press, November 2013, 256 pages, $50. Cultural Revolution For the past decade, China has been on a museum-constructing binge, tossing out new buildings for art and culture the way a sailor on leave tosses back beers. From 2000 to the end of 2011, the People's Republic of China added 1,198 museums, nearly doubling the number it had at the start of the millennium. Some were commissioned by ambitious politicians hoping to advance their careers. Some were put up by developers as ill-conceived amenities for enormous housing projects. Many remain empty much of the time, their
Read More

Clifford A. Pearson
No Comments
A revival finally opens in New York’s Union Square. The restored pavilion at night. Nearly four years after it was painstakingly restored by Architecture Research Office (ARO), the Beaux Arts pavilion at the north end of New York City’s Union Square finally opened to the public in May. Delayed by a lawsuit over its use, the open-air building serves as a restaurant from May through October and then as a multiuse space for educational and community activities the rest of the year. Critics of the project said a commercially-operated restaurant was inappropriate in a public park, while supporters countered that
Read More

Clifford A. Pearson
No Comments

A pop-up theater assembled inside a giant ballroom brings new scale to portability.

Clifford A. Pearson
No Comments
At an event organized by Asia Design Forum, participants talk about the effects of geography on design. With tall buildings screaming for attention, the skylines of fast-growing cities can seem the same. A discussion of design and geography at the Architectural Association in London this spring turned into an examination of difference and uniformity in the work of architects practicing globally. Presented by Asia Design Forum (ADF), a nonprofit think tank, the event was the sixth in a series of Design Roulettes held in different cities since 2010 and the first one outside of Asia. “So many buildings in Asia
Read More

Call to Prayer: Using rugged materials and a modern design vocabulary, an architect creates a place of worship that connects the essence of Islam with contemporary life.
Clifford A. Pearson
No Comments

In most of the Muslim world, the dome and minaret signify the mosque, acting as symbols that transcend linguistic and cultural barriers.

Clifford A. Pearson
No Comments
The Rising: A museum devoted to a traumatic event provides space for soaring emotions as it descends to bedrock. Slurry wall and “Last Column” on the exhibition level. Fought over, stalled, reconceived, and finally built, the National September 11 Memorial Museum has followed a tortuous path since it was first proposed in Daniel Libeskind’s 2003 master plan for Ground Zero. While nearly every part of the redevelopment effort at the World Trade Center site in lower Manhattan has generated debate, the museum has been a lightning rod for particularly intense criticism and controversy. Its role as the main keeper and
Read More

Clifford A. Pearson
One Comment
Surrounded by history but bereft of innovative work from the past four decades, Cuban architects hope for the future. National School of Ballet (1961-5), by Vittorio Garatti. Making a living as an architect is tough anywhere. But in Cuba it is essentially impossible. Although Raúl Castro has loosened state control of the economy a bit, the private sector still barely exists. All legally-sanctioned construction is done by the government. And everyone agrees that a government salary doesn’t cover anyone’s monthly expenses. Cubans, though, are resourceful and somehow find ways to make ends meet. Over coffee at the Habana Libre Hotel
Read More 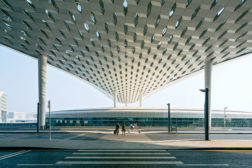 Shenzhen, China
Clifford A. Pearson
No Comments
Treating an enormous airport in Shenzhen, China, as a cinematic experience, a Rome-based firm designs a series of architectural scenes in which light and space play leading roles.
Read More
Previous 1 2 3 4 5 6 7 8 9 10 11 … 21 22 Next
Subscription Center
More Videos