Debra K. Rubin
No Comments
Market contraction and bottom-line hits are set to plague the AEC sector through 2021, but firms push to keep most staff in place, chiefs say in surveys.
Read More 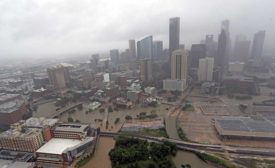 As reports trickled in of damaged infrastructure, rescue efforts remained focused on saving lives during the continuing disaster of Hurricane Harvey before assessing the damage of the storm and subsequent flooding.

Debra K. Rubin
No Comments
This article first appeared on ENR. Four months after URS agreed to an activist investor's demand for a reshaped board and new strategic options to boost its share price, the firm is set to be acquired by AECOM. The deal, worth about $6 billion in cash, stock, and assumed debt, would keep URS intact. The firms, which announced the transaction on July 13, said it would create the latest global giant, particularly in oil, gas, power, and government services, with more than $19 billion in revenue and 95,000 employees in 150 countries. The $56.31 per share price is about 19
Read More

Debra K. Rubin
No Comments
Related Links: Top 250 Firms in 2011 Merger Mania KlingStubbins: Autodesk AEC Headquarters Jacobs Engineering Group has acquired the architecture firm KlingStubbins, a move that boosts the parent company’s design capabilities and adds 500 U.S. and Asia-based employees. KlingStubbins, based in Philadelphia, ranked number 31 on Architectural Record’s 2011 list of the Top 250 architecture firms in the United States. In 2010, the company earned $98 million in design revenue. “We are acquiring a solid business with a history of good performance,” said Jacobs President and Chief Executive Officer Craig Martin, in a statement released on November 2. Terms of
Read More

Debra K. Rubin
No Comments
An Ohio state claims court judge on Dec. 6 dismissed a 2009 suit against Ohio State University by Karlsberger Architecture Inc., Columbus, that sought $1.3 million in design fees for completed work after the university terminated the firm on its 1-million-sq-ft ProjectONE hospital megaproject. The firm was replaced in its role on the $1-billion project by HOK, the job's master planner. Photo courtesy Ohio State U. Karlsberger Architecture was seeking $1.3 million in design fees for a hospital project. Related Links: Architecture Firm Sues Former Client Judge Joseph T. Clark upheld the termination, finding no "implied covenants" that would contractually
Read More

Debra K. Rubin
No Comments
Arcadis, the Dutch-based environmental and infrastructure engineering giant, announced July 6 that it has acquired RTKL Associates, the architect-engineer. Based in Baltimore, RTKL ranks 61st on Engineering News-Record’s list of Top 500 Design Firms, with more than $203 million in 2006 revenue. Arcadis will not integrate RTKL, which has 1,050 employees, into its operations but will operate RTKL as a wholly owned subsidiary. Terms of the transaction were not disclosed. RTKL’s 100 or so shareholders consisted of senior management, vice presidents and principals of the company, and all of them voted in favor of the sale, says Arcadis CEO Harrie
Read More
Subscription Center
More Videos