Emre Arolat Architecture
Turkey’s recent boom economy, though now bust, is manifest in Maslak, Istanbul’s business district. Office blocks, malls, and high-rent residential towers, arising haphazardly, have formed a skyline with little coherence. In the absence of urban planning, Turkish corporations have vied to embody their power and prestige in buildings, forming a mismatched, chest-beating architectural tribe. There is one office tower in the area, however, whose voluptuous, textured silhouette stands out against the hard, glossy grids and erratic geometries. Designed by Emre Arolat Architecture, Maslak Tower No. 1 is named for its street address. It occupies an irregular site—at the confluence of two busy boulevards, limited by local code to a footprint of only 7,535 square feet and 20 stories (280 feet) high—while surrounding towers rise to about 50 stories. Additional Information:
Jump to credits & specifications

“The client was looking for an extravaganza, something distinct from the others,” Arolat says, “but the business partners didn’t have a site on which it was possible to do a grandiose or powerful-looking building. I told them that it’s not easy, when everyone is shouting, to make yourself heard. To distinguish oneself, it’s better to be very, very quiet.” It turned out that, although regulations restricted the building’s floor area, there was no limitation on the volume of the building. “We realized that if we created a void inside, it wouldn’t count in the regulation’s numbers,” explains Arolat’s partner, Gonca Paşolar, “but the building would look much bigger than it really was.”

The architects decided to build a rather ordinary, inexpensive, reinforced- concrete building with a double-glazed curtain wall inside an outer, strikingly unique, curvilinear facade. This facade would have overlapping laminated, fritted, and clear glass panels. Its undulating exterior wall stands apart from the basic inner box for office space, so that an airy void is created between the two. This peripheral interior space contains 66-foot-high vertical gardens facing southeast with planters on every fourth floor, and metal grate walkways on the north, which can be accessed by the occupants. The void has its own natural microclimate: it is warmer in winter and cooler in summer, providing ventilation and lower energy consumption while filtering light, cutting street noise by 70 percent, and shielding the offices from wind and dust.

The biomorphic facade hides an explicitly industrial exoskeleton that anchors the outer skin to the inner structure. The architects left these columns and curving beams exposed within the cavity to preserve sight lines from the ground to the roof.

The building’s spatter-shaped plan consists of 12 folds or extrusions from the face of the building that generate a variety of views in and out. “There are very fast roads around the building,” Arolat says, “so when you see it, it always appears at a different angle and in a different color or light.”

Security is a priority in Istanbul, where political coups, shootings, and bombings occur, and new sections of the city are characterized by gated communities. One of the resulting failings of Maslak’s neighborhood is its lack of public or green space. Access, controlled by guards and X-ray monitors, is limited to employees, which makes the ground floor of most towers impermeable. To mix security and porosity, exclusivity and inclusivity, Arolat designed indoor and outdoor spaces for a café (called Prototype No. 1) at street level. Only employees can enter upper floors—there are no floor-selection buttons in the elevators because staff IDs admit them only to the levels they work on—but the eatery is open to any passerby.

And that, not coincidentally, is where the void begins. Those sitting on the café’s island-like inner terrace, surrounded by a shallow pool of water and its reflections, can look up through the building’s industrial filigree and feel the sun filtering through onto their faces. Not far from security, it is a manifestly peaceful space. 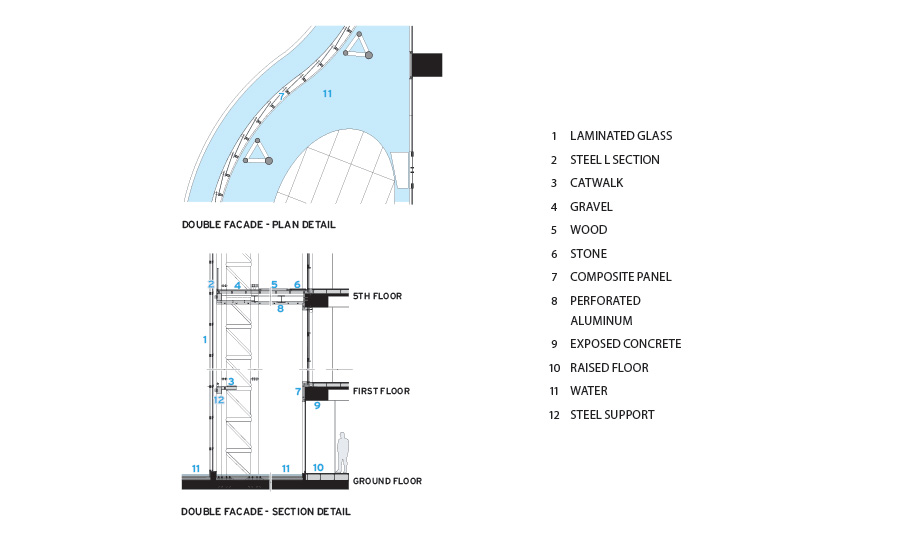 To create the outer skin, data describing the climatic conditions affecting the tower were modeled in three dimensions. The resulting curvilinear facade is comprised of 3,792 rectangular, tempered, laminated-glass modules that are 43 inches wide by 52 inches high, spaced 4 inches apart. Those on the west and south facades are fritted with translucent enamel in various opacities and mapped strategically onto the building. The inner skin is insulated glass with a low-E coating. The outer facade is anchored to the inner building’s structure at every fourth floor, creating levels with vertical “gardens” on the southeast—though these are just a few large planters and can only be accessed by opening interior windows. On the north face, however, employees can open glass doors onto metal-grate walkways that extend the length of every floor and provide lounges. To connect the outer glass skin to the concrete building, structural engineer Altineller used three-dimensional vertical trusses on the wider facades facing north. These are the ones fastened to the main structure every fourth floor via a 27-by-27-foot grid of steel beams. The trusses support curving steel beams— dubbed “snail beams.” They follow the form of the undulating outer skin, resting on steel supports that coincide with every glass module. Each of these modules are attached to the inner building by four steel U-profiles. The exposed structure keeps sight lines open. Arolat says, “I consider the structural engineer one of the architects of this building.”

The Heckscher Foundation for Children

Shonquis Moreno is a design and architecture journalist based in Istanbul, San Francisco, and Brooklyn, New York.