Much of contemporary Beijing’s urban layout has its roots in the 15th century, when the Ming Dynasty built the Forbidden City as its seat of power. Today the sprawling metropolis is still organized according to districts and ring roads encircling the former imperial palace. In the Wangjing area, half-way between the traditional city center and the international airport to the northeast, a shiny new business district has risen in recent years on what was formerly farmland and tracts of squat Soviet-style buildings.

Today the area’s glass-clad skyscrapers house the headquarters of financial firms, the homegrown Alibaba technology behemoth, and industrial companies. China Poly Group—one of the country’s biggest state-supervised conglomerates—received from the city government a choice piece of land that in the last decade it transformed into high-end apartment buildings and Poly International Plaza, the group’s most prestigious commercial project, which sits on a 5.7-acre lot.

With a portfolio ranging from real estate to one of the country’s biggest art auction houses, the company wanted to build a modern and elegant complex befitting its public profile. For the three office buildings on the site and the master plan, the company turned to Skidmore, Owings & Merrill (SOM), which had designed several projects for it, including the Poly Real Estate Headquarters in Guangzhou and the Poly Corporation Headquarters in central Beijing. The firm has been active in China for 25 years, having designed the U.S. Consulate in Guangzhou (RECORD, March 2014), as well as the U.S. Embassy in Beijing.

The San Francisco office of SOM took charge of the project and envisioned it as three elliptical towers connected by a shared basement, set against manicured stone-and-shrubbery gardens. With a smile, Poly executive Zhang Wei says, “We wanted something that can make our company more famous.” As a key project manager for the complex over the last five years, Zhang has seen the Poly development unfold to much acclaim in both the local and international press.

The centerpiece of the complex is a 499-foot-high building, nicknamed the Diamond Lantern, that is flanked by two shorter buildings, 276 feet and 220 feet high (all three were completed last year). While the shorter towers—since sold by Poly—are discreetly clad in vertical grids of dark metal rods, the main building—which Poly intends to keep and mostly lease out—features a crisscrossing steel-and-concrete diagrid, along with a concrete core. These make up the primary load-resisting system. This white aluminum–clad exoskeleton and the facade’s angled glass give the building the appearance of an origami lantern, especially at night when it is dramatically illuminated by lights embedded in the structural elements.

Nestled alongside Poly’s residential development, called Central Park—“ultraluxury,” Zhang points out—the office buildings project a genteel, contemporary character distinct from the bustle and flash of much taller buildings nearby or the undulating forms of Zaha Hadid’s Wangjing SOHO complex visible in the distance.

“We went through a process of soul-searching with the client,” says structural engineer Mark Sarkisian, one of the leads on the project for SOM. “We looked at what the site means and developed something iconic and responsible.”

Leo Chow, the SOM partner who headed the design team, says the architects sought to satisfy “the functional and business needs of the owner, creating a high-performance space that elevates the daily experience of the users and achieves a cultural resonance with the site.” In the end, they settled on an elliptical form that responds to the curving highway adjacent to the site and sets it apart from the blocky residential towers nearby. Chow also recognized the “symbolic signif icance of a lantern hung outside a door as a sign of welcome and an object that attracts good fortune.”

Inside the building, white-gloved attendants man the spare lobby, covered in Calacatta marble specially quarried for Poly from Carrara in Italy. The main entry at the north end of the lozenge-shaped building leads to an impressive 410-foot-tall, skylit atrium that draws the eye up the tower’s curtain wall and to the office floors above. A secondary atrium on the south end is primarily visible from upper floors, where one of the elevator cores drops off to reveal the space. Three banks of elevators take visitors to office floors, while a separate elevator bank goes down to cafeterias in the first basement level and parking below that.

Each elliptical floor plate provides about 21,200 square feet of column- free space. Floor-to-ceiling glass allows sweeping vistas of the emerging neighborhood and delivers a sense of expansiveness to the offices. Last autumn, the headquarters of Hyundai Capital, a Korean investment firm, moved into floors 19 to 26, becoming Poly’s main tenant. Other levels have attracted single and multiple tenants. Poly has reserved the double-height top floor (31)—designed to feature vertical gardens—for its own use in the future.

The building also had to cater to Beijing’s particular environmental requirements: air-quality concerns, energy efficiency, extreme climate, and seismic activity. In pleasant weather, external vents in the glass facade open to assist air circulation. Behind the exterior skin, a second glass envelope reduces noise from the busy street and mitigates Beijing’s high summer temperatures and sub-freezing winter weather. According to SOM, the tower’s design lowers carbon emissions by 18 percent and energy use by 23 percent.

Instead of competing with other buildings in terms of superlatives—height, price, or spectacle—Poly and SOM created a tower that stands out as a technological achievement and a distinctive landmark in a booming new district of the city. 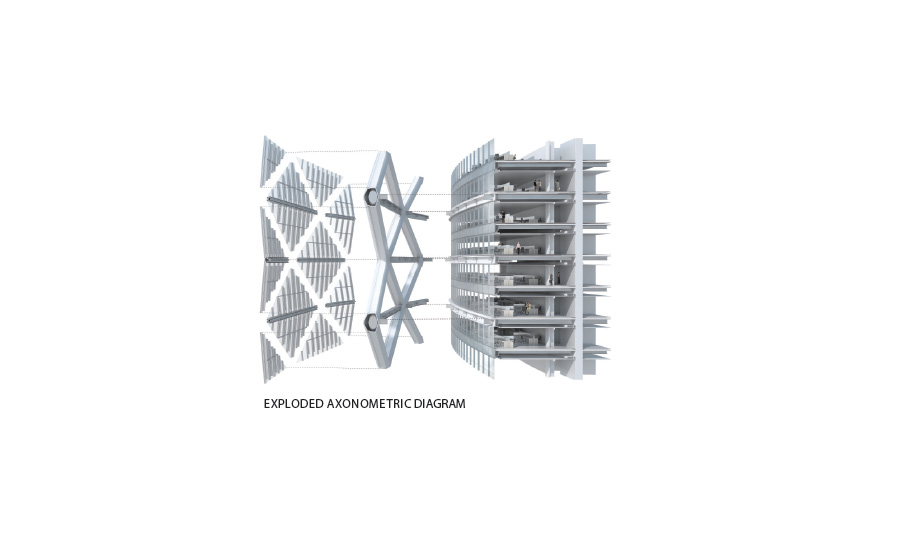 Poly International Plaza’s Tower One evolved from a close collaboration between SOM’s design and engineering divisions. It moves diagrid building technology forward, adapting it to Beijing’s specific climatic and seismic conditions. SOM’s Mark Sarkisian, who led structural engineering work on the project, says the team referenced San Francisco’s Alcoa Building (1967) and Chicago’s John Hancock Center (1970), two SOM buildings that heralded innovations in diagrid construction and earthquake resistance. “The exoskeleton and the internal core serve as the complete structural system for the building,” says SOM partner Leo Chow. “This allowed the gravity and lateral-load system to be one and the same and provide a completely column-free space.” This strategy was essential to the scheme, he explains, “because it created the opportunity for us to introduce the atria by carrying lateral loads around the perimeter rather than through the middle.” The members themselves are steel tubes, filled with concrete. The approximately 43-foot-long sections were fabricated in a shop, then assembled and filled with concrete on-site. Despite the building’s curving form, all the structural elements (as well as the curtain wall) are composed entirely of straight sections. By employing diagrid nodes and hanging floors from alternate stories, the engineers distributed stress to the exoskeleton and created the distinctive folded facade.

Alexandra A. Seno is a Hong Kong–based architecture and design critic who has written for The Wall Street Journal and The New York Times, among other publications.