Before temporarily shuttering its doors due to the COVID-19 crisis in March (along with all New York restaurants), the six-month-old Asset had become a welcome addition to the dining scene near Manhattan’s Central Park and the American Museum of Natural History. According to early reports, its popularity stems from good food, an updated spin on New American cuisine, and a comfortably urbane interior by Bates Masi + Architects that blends industrial elements with a refined material palette—one that the food blog Eater says “sets it apart from family-friendly neighborhood spots.”

The judicious scheme should come as no surprise to those who know Bates Masi’s largely residential portfolio, though Asset is only its second restaurant project. (Their first was for the same client.) Based in East Hampton, Long Island, the architects have built a well-deserved reputation for designing relaxed, beautifully detailed modern houses that encapsulate what many city dwellers and locals envision when they think, “East End.” Several have appeared on these pages, with more than one Record House among them (April 2012 and June 2017). What is surprising, says principal Paul Masi, is that the firm was asked to design a city restaurant in the first place. “We had designed a home for the client and were up-front about our hospitality experience, which was none,” says Masi. “But he said, ‘If you can give half the energy to my restaurant that you gave to my house, I’d be excited to have you do it.’ ” 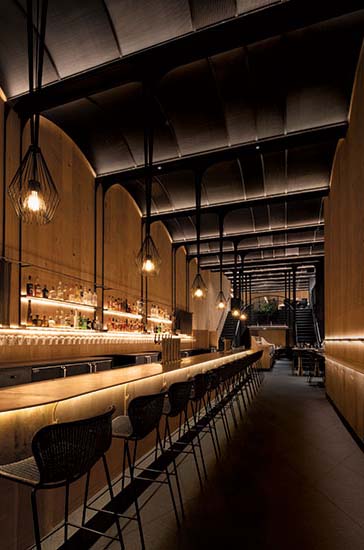 That was more than six years ago. Their first venture, Tessa, in the same Upper West Side neighborhood as Asset, has done well since opening in 2014, says Masi. When the owner asked the architect to design a sibling establishment (the name Asset is the inverse of Tessa), Masi recalls, “they wanted a similar language and palette. If someone were to visit both restaurants, they would see a common thread.” But, he adds, “we pushed it in a slightly different direction.” With Tessa, the architects had employed a spirited mix of brick, wood, and steel grating for a gritty urban vibe. For Asset, the team developed a more sophisticated dialog with the bones of the existing architecture—specifically, metal lath vaults above the fire-rated ceiling, which were revealed during a ground-penetrating radar scan prior to design and construction. 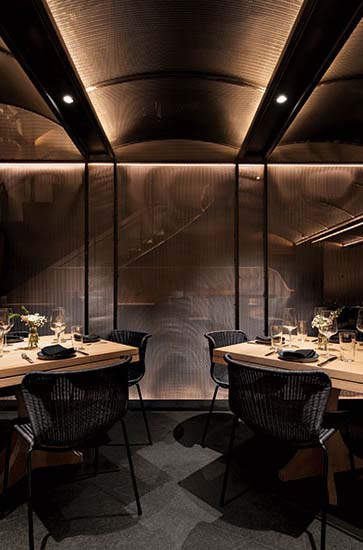 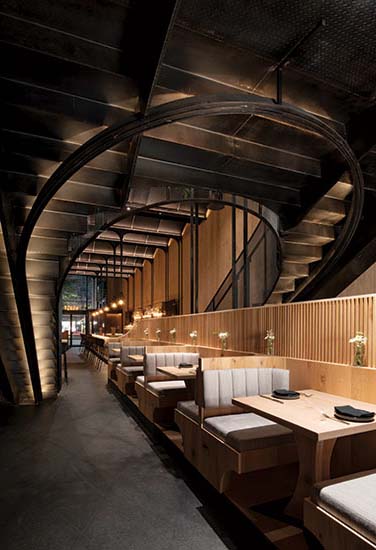 A mesh wall (1) creates an open yet intimate dining area next to the booths (2), which catch the glow from discreet LEDs under the stair. Photos courtesy Bates + Masi Architects

Located within a historic district, on the ground floor of an 11-story, 120-year-old Lamb & Rich Renaissance Revival–style building, the 3,450-square-foot space has soaring ceilings, a mezzanine, and a basement level. Masi reimagined the hidden vaults using common steel expanded-metal mesh, blackened for an industrial look. The new vaults are anchored to the existing girders below the extant ceiling, with enough room between to conceal acoustic foam, mechanicals, and audiovisual equipment. This vaulting system, he says, draws guests into and through the 96-foot-long restaurant, which transitions from a narrow 15½-foot-wide entrance—which opens onto a 48-foot-long brass-topped oak bar—to a 31-foot-wide dining section at the back, where intimate groups of tables can be closed off by metal-mesh curtains for private events. 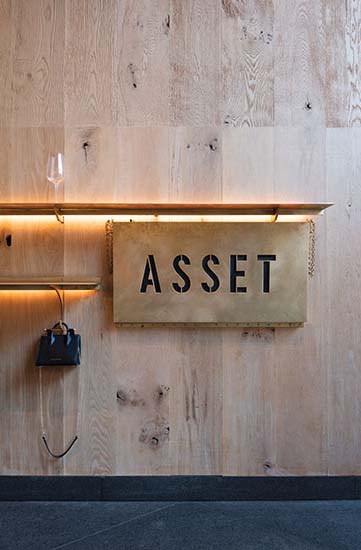 Brass signage near the entry (above) drops down to become a table at wheelchair level. Photo courtesy Bates + Masi Architects

Delineated by LED cove lighting and punctuated by downlights, the girders are celebrated and serve as a structural fulcrum, supporting shelves behind the bar, skeletal steel pendants above it, and the room’s focal point, a curved stair made of diamond-plate steel that hovers gracefully above the ground floor. Figuring out how to move people easily in such tight quarters was the biggest challenge, says Masi. “The owner was emphatic that staff and guests should not use the same pathways.” The team’s solution arcs the stair around a slender row of booths that discreetly divides the restaurant into guest and service zones. Patrons use the southern side of the room and stair; waiters are on the north, where they can move unimpeded from the bar, up to the mezzanine for dinner service or parties, and down to the basement kitchen. 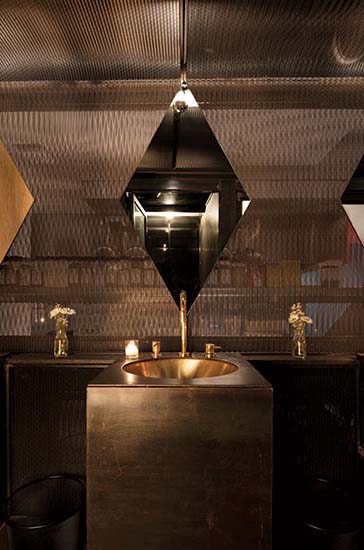 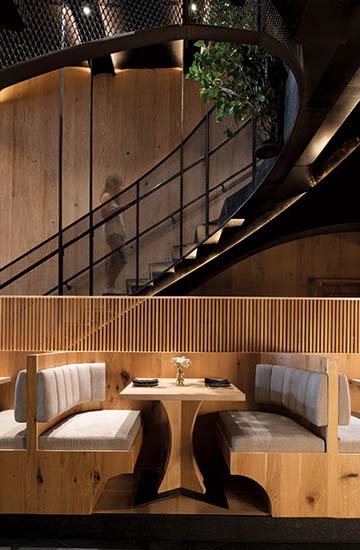 The diamond motif recurs in the mesh wall and as a mirror in a basement restroom where the washbasins (3) overlook the kitchen. It also appears along the stair, where wait staff hurry to and from the mezzanine for service (4). Photos courtesy Bates + Masi Architects

Natural oak walls and furnishings—in contrasting smooth and rough textures—provide a warm, hospitable foil for the assertiveness of the black steel and the repeated diamond motif, which recurs at varied scales throughout the restaurant on perforated mesh walls, large black-granite floor slabs, restroom mirrors, and even an umbrella stand. And, while no one would describe Asset as homey, it is imbued with the kind of thoughtful custom details, materiality, and spatial versatility found in many of the firm’s residences. Ultimately, says Masi, “our homes are about creating memories and entertaining. There are definite parallels in that.” 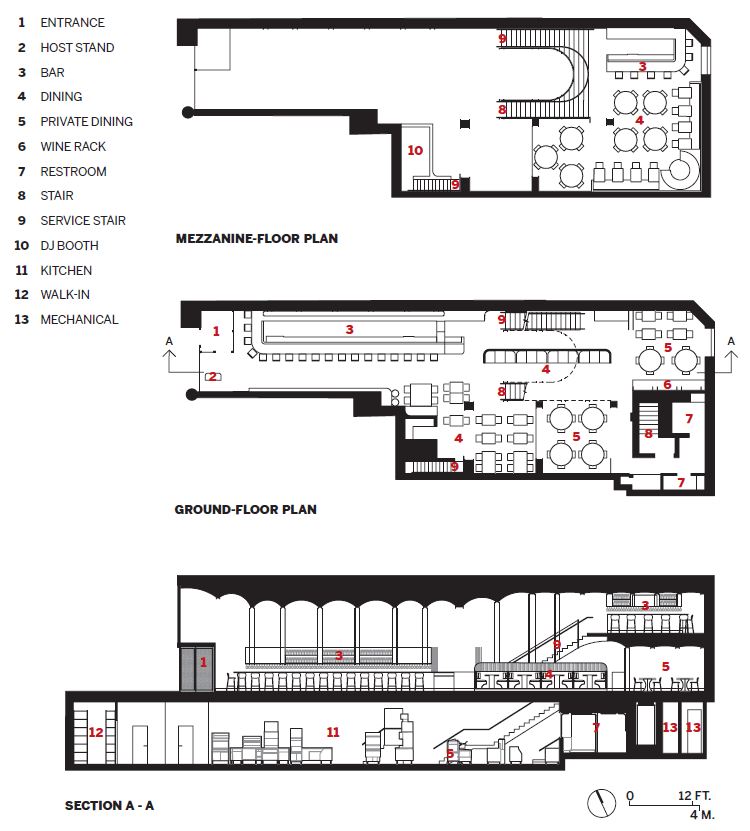