Kimpton Da An Hotel by Neri&Hu Design and Research Office

When Lyndon Neri and Rossana Hu of Shanghai-based Neri&Hu Design and Research Office were commissioned to design a hotel in Taipei, they were presented with something between an adaptive-reuse project and a blank slate.

The 15-story tower they had been given to work with, in the upscale Da’an district of the Taiwanese capital, had been newly designed and built for high-end apartments. But the developer’s 11th-hour decision to make it a hotel instead left it mostly an empty shell, save for a few flourishes, like a traditional Chinese-style garden (nice enough to keep), black-granite neoclassical facades (too late to change), and two Corinthian columns in a marble-clad lobby (which had to go).

And with no brand to design for—the U.S.-based Kimpton group wasn’t tapped to run the property until just months before its pre-coronavirus, 2019 opening—Neri&Hu had latitude, early on, to “look at issues beyond hotel issues,” Neri says, “and explore urban and cultural ones too.”

Known for their hospitality projects—and, increasingly, art museums, chapels, and institutional projects—Neri&Hu has a knack for creating architectonic spaces of extreme precision and discipline while infusing them with a sensitivity for materials and local context, to add a warmer, narrative touch. Their vocabulary is rigorous and tactile but also versatile, and, at the Kimpton Da An, they sought to create a proverbial hotel as “inner sanctuary” that made the most of a tight footprint while taking cues from the streets and spatial strategies of the dense city outside. 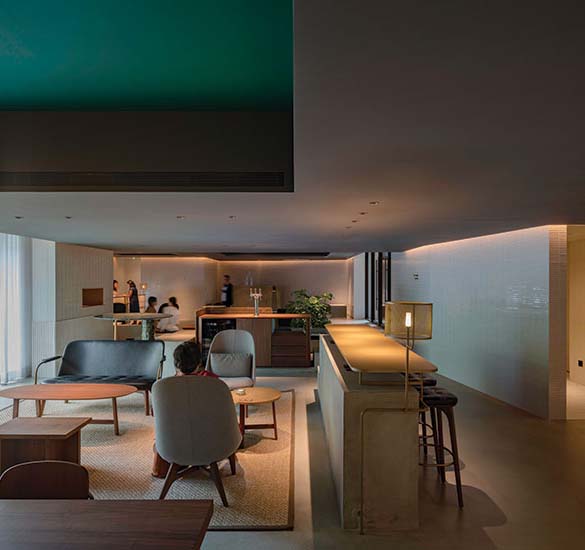 The lobby lounge sits under a double-height volume and opens to the garden. Photo © Pedro Pegenaute, click to enlarge.

Past the Chinese garden, which is to the side of the hotel, one enters the lobby. With its Corinthian columns and marble removed, what remained was a double-height space that was being eaten away by a hotel’s additional mechanical and utility requirements. Faced with the developer’s plan to drop the ceiling and add a mezzanine, the architects instead carved out a sculptural volume in order to preserve the interior’s height and natural illumination. “We needed the mechanical, so we carved around it,” Neri says. “What was left over became the skylight,” with its trapezoidal sides painted in contrasting dark gray and light-softening red.

The resulting variation in ceiling heights helped organize seating groups on the new polished concrete floors below. A reflecting pool was installed along an existing ground-level window to refract rippling light into the interior, while new openings were cut to bring in additional daylight and provide views outside.

But perhaps the most unsung feature of the lobby—which “was getting a bit monastic,” Hu admits—is its white ceramic tiles. Recalling the “bathroom tile” cladding that was once the default exterior facing for buildings in Taiwan’s humid subtropical climate, the architects took the now largely maligned material and, as Neri says, “we put it everywhere”—on the lobby walls, along corridors, in the guest rooms.

Alongside metal grilles and mesh—a nod to the profusion of screens and window grates that often abut those ubiquitous tiles in Taipei—the ceramics could easily be thought of as a faddish quotation of the urban vernacular. But they also offered a chance to reappraise a readily available and inexpensive material for a project on a tight budget, using the skills of local workmen. “These guys are really good at working with this stuff,” says Neri, referring to the tiles, but also to the terrazzo (another common material in Taipei) of the restaurant floors and suite bathtubs, and to the custom-designed lights, made from off-the-shelf industrial brass tubing, that hang above the lobby. 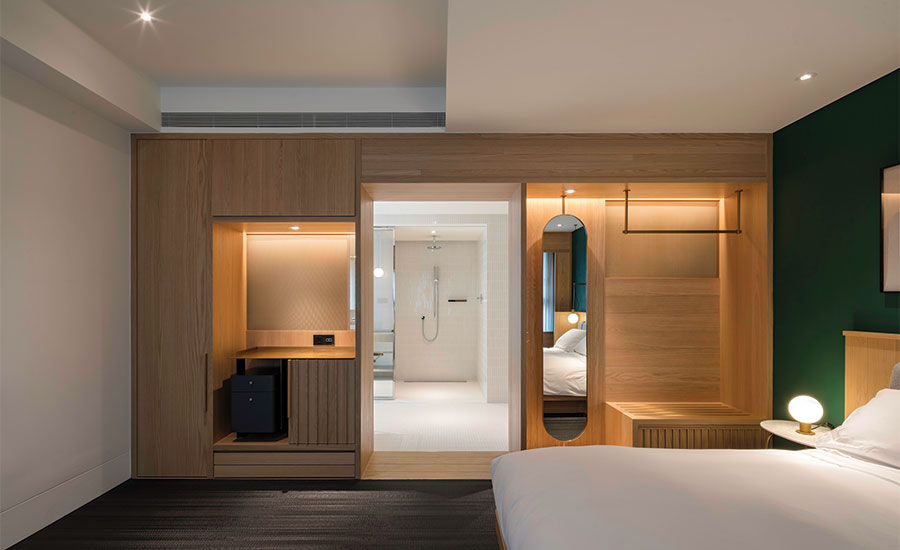 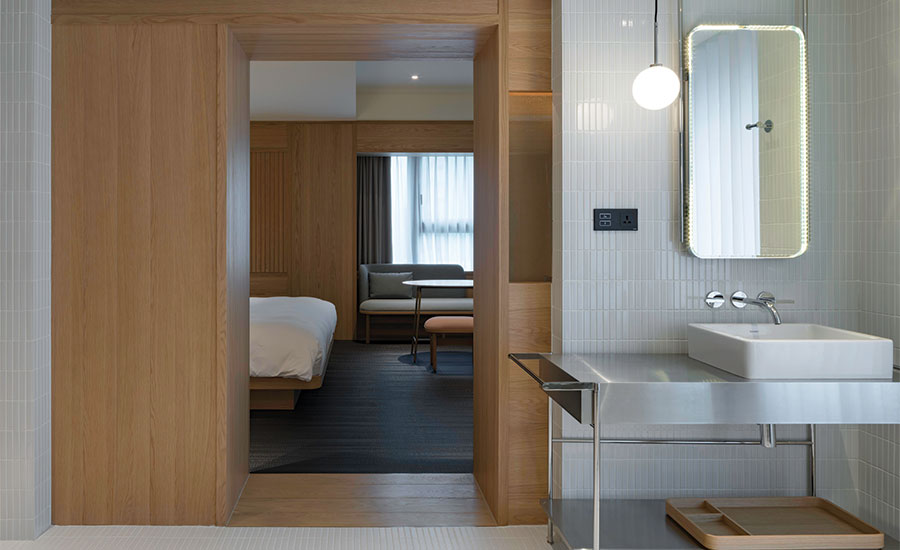 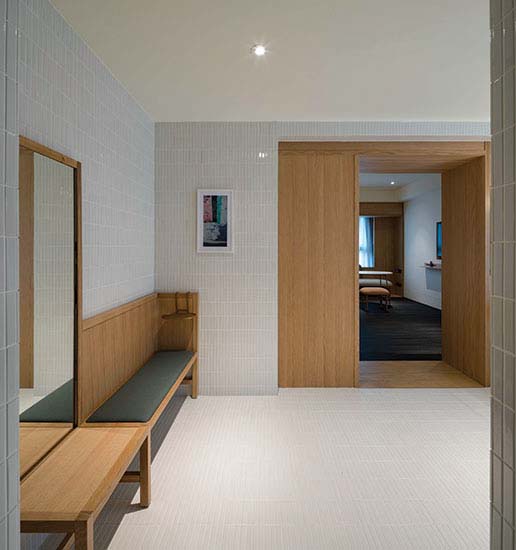 Moreover, the tiles helped prompt the architects to rethink room typologies. An unusual feature of the property’s 129 guest rooms is that you enter them through their (tiled) bathrooms—a space-saving move that also recalls the bathrooms in older Taiwanese buildings, where there’s often no barrier between tubs, showers, and other functions. “Growing up, the entire bathroom was a wet room,” says Hu, who was born and partly raised in Taiwan. (In this case, however, the guest rooms’ separate toilet and shower are enclosed by a sliding door.) 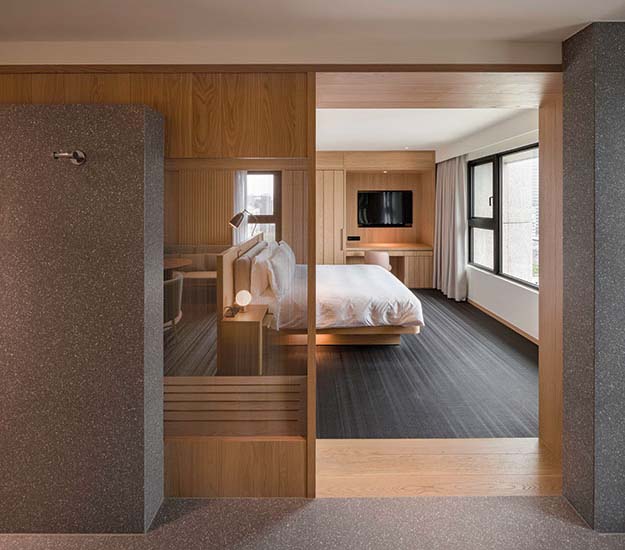 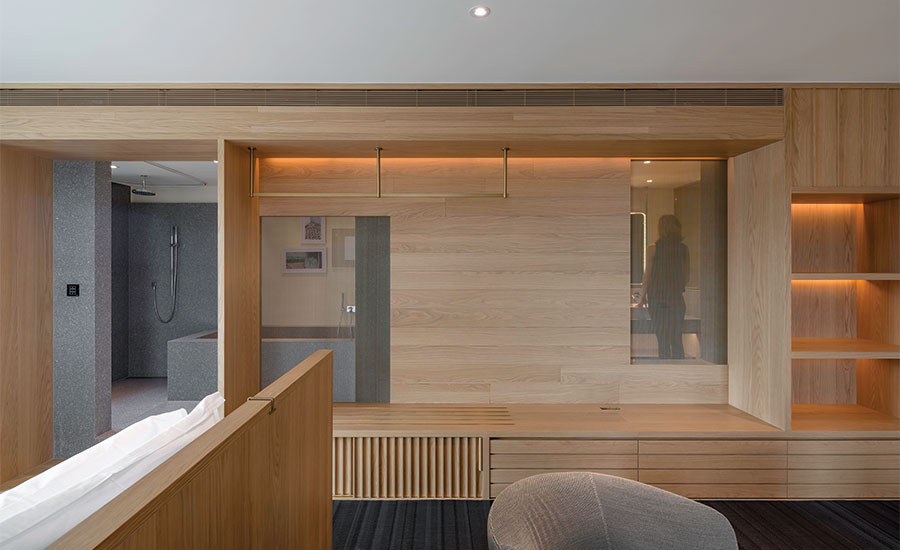 An oak storage wall in one suite is pierced by screens to provide “voyeuristic” views into the bathroom. Photos © Pedro Pegenaute

To further make the rooms as efficient as possible, the architects devised seven compact room and suite configurations with “voyeuristic openings to the bathrooms, where we borrow light from the bedroom,” Neri says. Oak millwork fits out the latter with yacht-like precision, including folding screens that bring interior consistency to a hodgepodge of window openings (a result of the building’s original residential purpose). Even the custom furniture was made 15 percent smaller than standard sizes to maintain comfortable proportions. 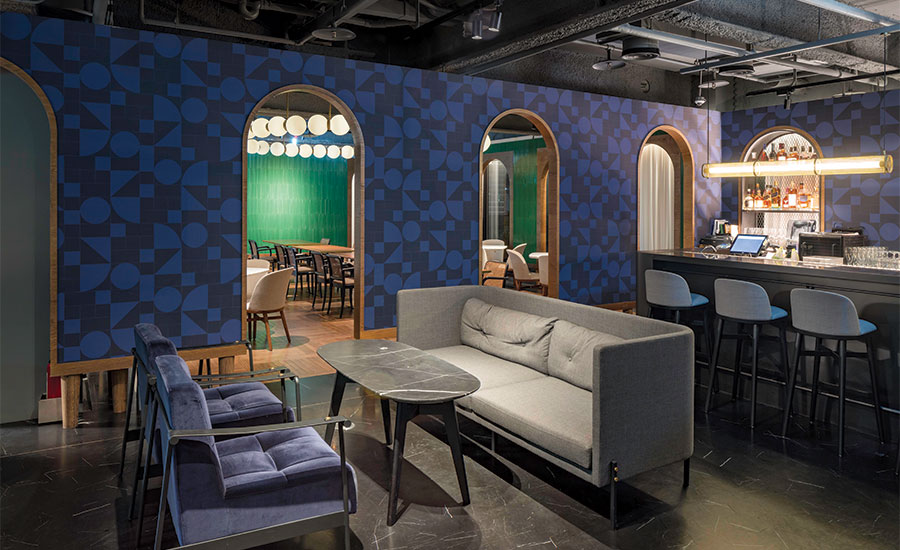 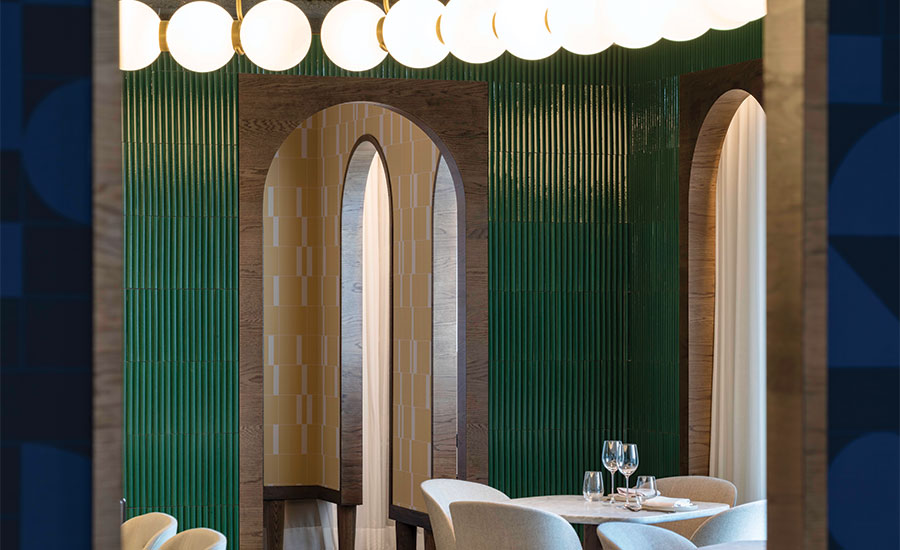 The space-maximizing tricks extended to the 12th-floor restaurant, where the restaurateurs’ request for a range of different rooms in a tight 2,150-square-foot floorplate was satisfied by areas covered in tiles or wallpapers of different colors and patterns, and divided by partitions mounted on footers. In Taiwan—which has so far avoided the lockdowns implemented elsewhere due to its success in controlling the coronavirus pandemic—“we always find this blurring of space, like restaurants where you line up or sit and eat, and everything bleeds into the sidewalk,” says Neri. “This project was about negotiating thresholds.” 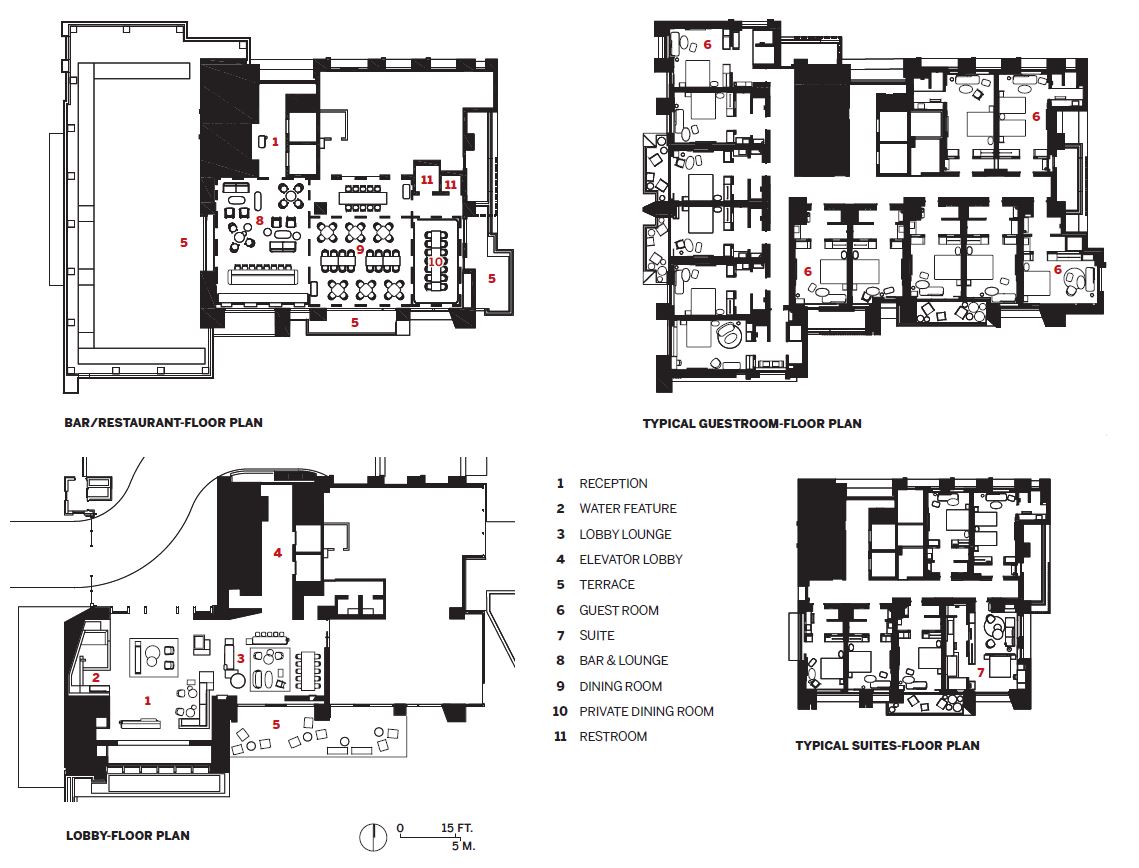