The Memorial to Enslaved Laborers at the University of Virginia

We know that Thomas Jefferson’s stirring words on equality and inalienable rights do not comport with his own history. Over his lifetime, 600 enslaved people toiled at his home, Monticello, and, after his death there, on July 4, 1826, he did not free those who remained in his will, as George Washington had done at Mount Vernon. Instead, almost all were sold to pay Jefferson’s debts, with many families cruelly broken up on the auction block. A Virginia abolitionist later remarked, “Never did a man achieve more fame for what he did not do.”

Jefferson’s conflicts as a man and thinker are even embedded in his architecture—as majestic as his words but also masking ugly truths. His crowning achievement is the University of Virginia (UVA) in Charlottesville, which he founded, designed, and began building in 1817. With its magnificent Rotunda, based on the Pantheon, overlooking a terraced lawn lined with colonnaded classical pavilions, the historic campus is now a UNESCO World Heritage site. 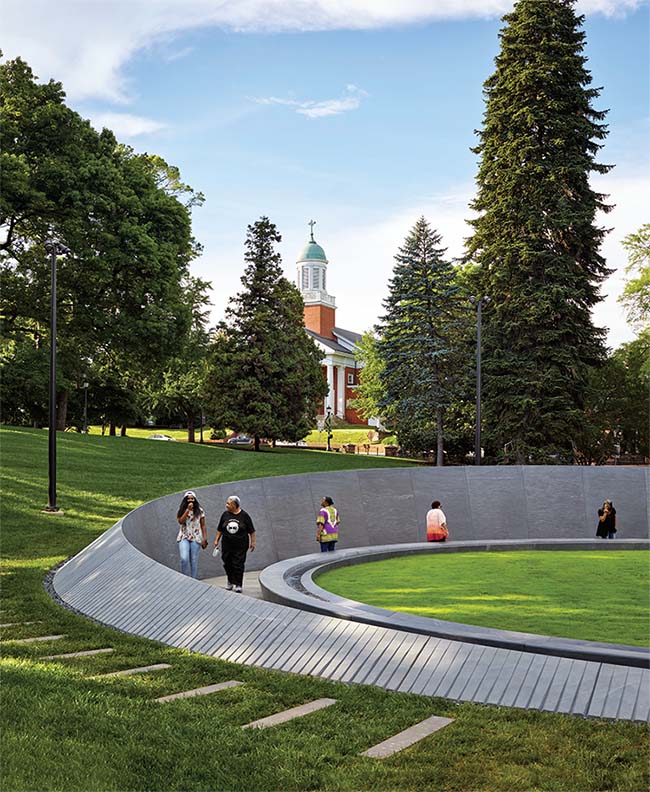 But about a decade ago, a group of UVA students began to push the university to grapple with the harsh reality that Jefferson’s beautiful “academical village” could not have been built, or maintained for its first 40 years, were it not for the labor of 4,000 enslaved men, women, and children. What is clear in the design, particularly in section, is how deliberately Jefferson hid the spaces for enslaved servants, tucking them out of sight behind and under the pavilions where professors would live. “He is very astute about the design of separation,” notes the cultural historian Mabel O. Wilson, a professor at Columbia University.

While the idea for the Memorial to Enslaved Laborers came from the students, it wasn’t until a university commission on slavery was formed in 2013 that plans to commemorate the enslaved gained steam. After a national RFQ , the winning team emerged, from a short list of four, in late 2016: Boston-based Höweler + Yoon Architecture (H+Y), in collaboration with Wilson, who is a UVA alum, a designer, and a scholar who focuses on architecture and race. Also on the team were Frank Dukes, a distinguished fellow at UVA, and Charlottesville landscape architect Gregg Bleam. There was not yet a scheme, or a site, or a budget.

What’s remarkable is not only the powerful design that is now complete—a walled circle of hewn stone, spanning 80 feet, nesting gently in the earth, rich with symbolic markings and evocative craftsmanship—but the design of the process to arrive at it. The H+Y team knew it would take a village—but more than the academical village. 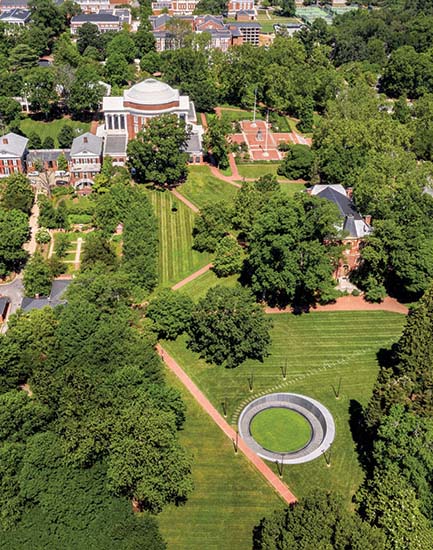 The Memorial is located to the east of the Rotunda. Photo © Alan Karchmer

With the university’s blessing, they engaged the Charlottesville community, particularly the wary descendants of the enslaved laborers, who refer to UVA as “the plantation.” The design team fanned out for town meetings at halls and churches. An early conflict arose over choosing a site: students longed for the Memorial to be on the historic lawn, but locals were uncomfortable venturing into the heart of the elitist institution. So the site chosen is down the slope, east of the Rotunda, closer to downtown. “We have 200 years of earned mistrust,” says Dukes, who was vital in facilitating the dialogues. “This process has gone a long way to ease that.”

Then the question: what form should the memorial take? Wilson had introduced the idea of the “ring shout,” an ecstatic ritual dance of enslaved people. While that was simmering, the “aha moment,” recalls Meejin Yoon, principal of H+Y along with her husband, Eric Höweler, came when someone in the annual Charlottesville Freedom Day march, marking the liberation of the enslaved by Union troops on March 3, 1865, carried a banner that read “Let Freedom Ring.” The design took shape as concentric rings of stone—the 80-foot diameter across the exterior is the same as that of the Rotunda—with an interior walkway, a circular bench ringing a water feature, and a large grassy space in the center for gatherings. 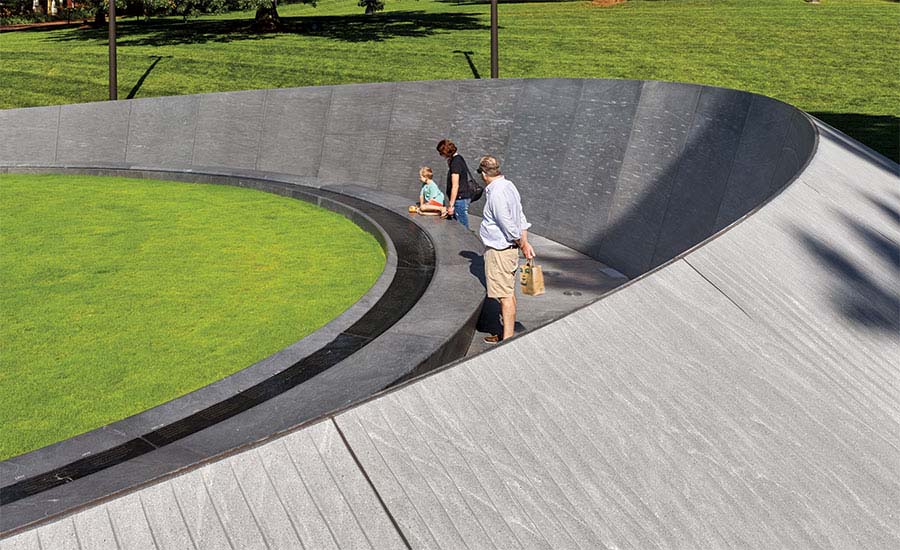 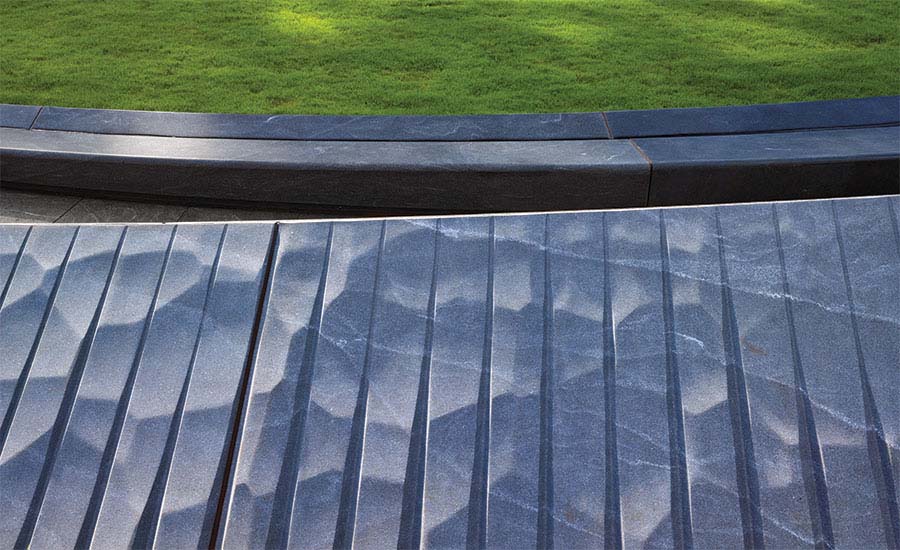 The rough-hewn granite exterior is meant to evoke multiple meanings.

The granite for the walls, called Virginia Mist, is from a nearby quarry, with the exterior roughly honed. “It is grooved to evoke how stone was cut,” says university architect Alice Raucher, “and also the scarring of those who were whipped.” (The stone fabricator had worked with H+Y on their extraordinary Collier Memorial on the MIT campus.) 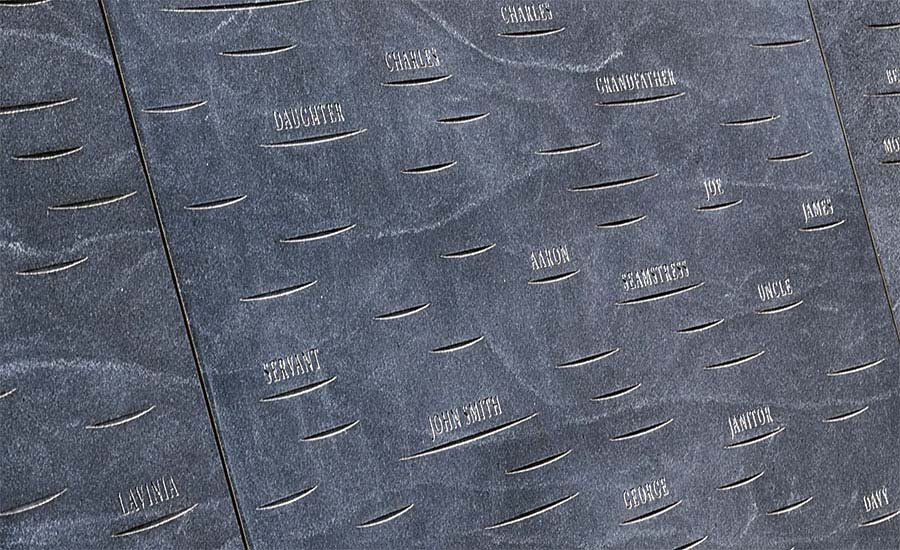 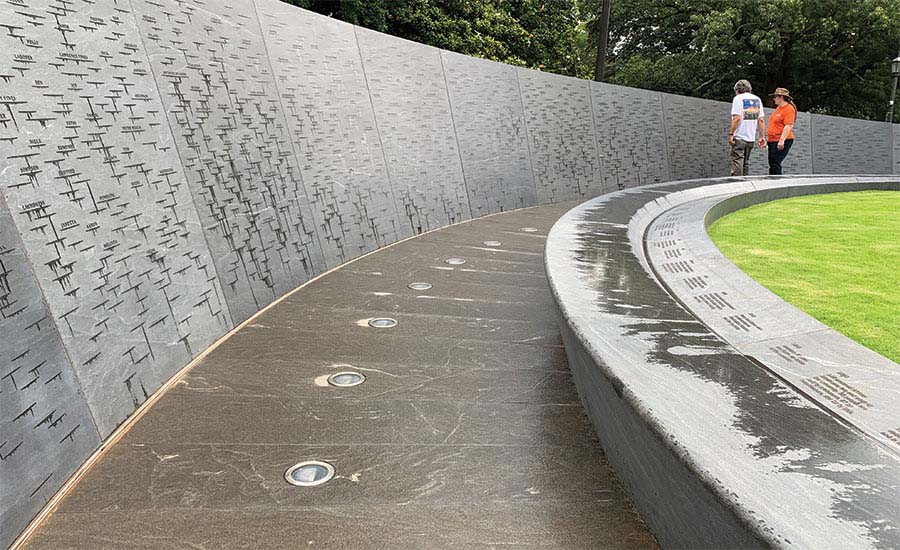 How the slashes appear on the interior wall after a rain. Photo courtesy Höweler + Yoon Architecture

Another hurdle was how to commemorate 4,000 people, most of them anonymous. Many in the community wanted a lifelike sculpture. “There was a struggle between abstractness and a desire for a literal figure,” says Yoon. “Yet people also like that the Memorial is a space, not an object.” Several eloquent elements have been incorporated into the design. Memory marks—4,000 horizontal slashes—are carved into the interior wall, each denoting one human being; of those, 900 names are known and inscribed there as well, and more names can be added if scholars unearth them. A timeline, etched into the ring of the shallow water feature, details some of their stories from the scant historical record, from the violence inflicted upon them to their workmanship—Thrimston Hern, a tolerable good stonecutter. 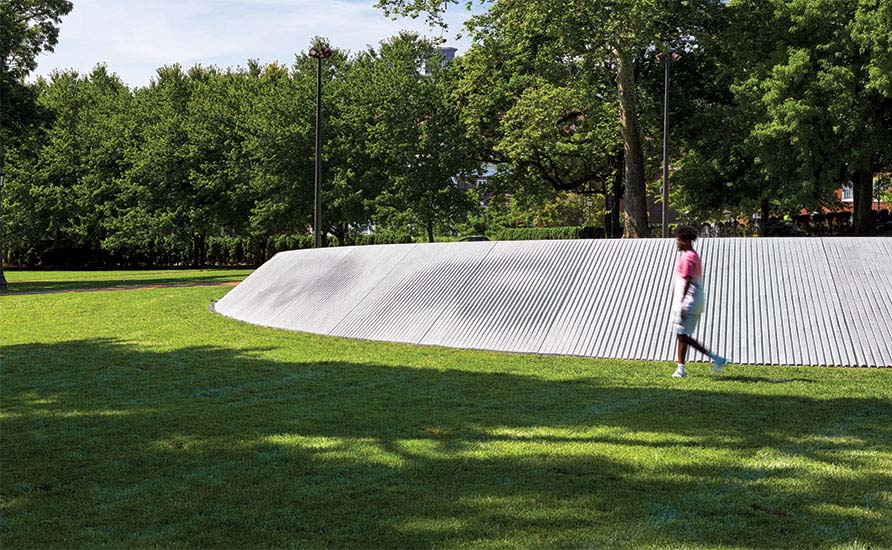 The haunting eyes of Isabella Gibbons, created by artist Eto Otitigbe, gaze out from the northwest side of its exterior wall. Photo © Alan Karchmer

The desire for a figurative depiction was met with a hauntingly beautiful work, created by the Brooklyn-based artist Eto Otitigbe. An enormous pair of eyes—drawn from a 19th-century photograph of Isabella Gibbons, a remarkable woman once enslaved at UVA who, after her emancipation, became an educator—is carved into the rough stone exterior, so subtly as to not be immediately noticed. Yet once you see those eyes, you cannot forget them.

Another unexpected sensation comes from walking the pathway inside the Memorial, where the outer wall begins to rise and cant slightly out, until it is 8 feet high, obliterating the horizon line—and then the wall slowly lowers again as you complete the circle. The effect comes from geometry: the form is not a sliced cylinder—far too obvious for these architects—but instead was generated by the intersection of two cones.

The Charlottesville community is not waiting for the official dedication, now postponed by the pandemic, to inaugurate the Memorial. Scores of white-coated health-care workers knelt there in early June to honor George Floyd. And the descendants have come—to touch the names of their forebears and witness the result of their dialogue. A community-engaged design process doesn’t always result in architecture of such uncompromised strength and symbolism. “We thought very carefully about what people would gain, engaging at both an intellectual and emotional level,” says Wilson. The designers asked themselves too, as Höweler puts it, “How do we make meaning in ways that are open to interpretation and have multiple readings?” Already, the Memorial is evoking the unexpected—and even its meticulous designers have had surprises. The first time they saw a soft rain fall, it looked as if the memory marks were shedding tears. 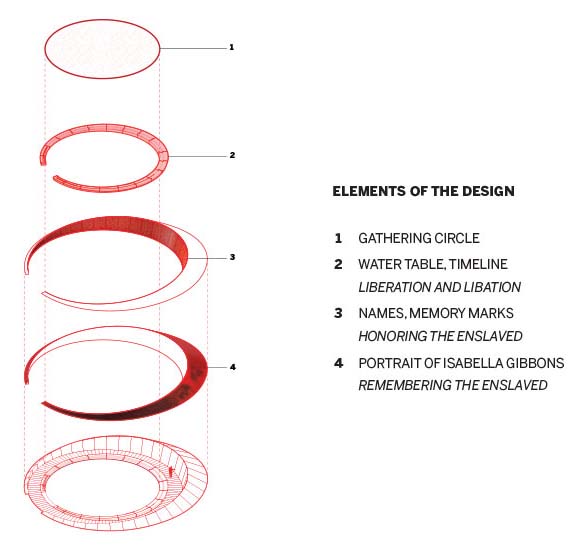