This is not your usual university building. It is a place where the grit of industry meets the campus mentality, out in the Warwickshire countryside in the English Midlands. It is the latest and largest in a sequence of buildings that London-based Cullinan Studio has designed for the Warwick Manufacturing Group at Warwick University since the early 1990s, and which now constitutes an industrial-training campus within a campus. The National Automotive Innovation Centre (NAIC) deals with the thinking behind the kind of emission-free and autonomous vehicles that are still some years away from entering production.

The building’s occupants, representing industry, research, and academia, would typically be housed in separate facilities. The idea is that innovation comes when ideas are shared. For the manufacturers, the NAIC brings together facilities that had previously been scattered throughout the region, which is the traditional heartland of the British automotive industry. It aims to accelerate the shift to green transport, and to bring forward the design and engineering brains of the future. 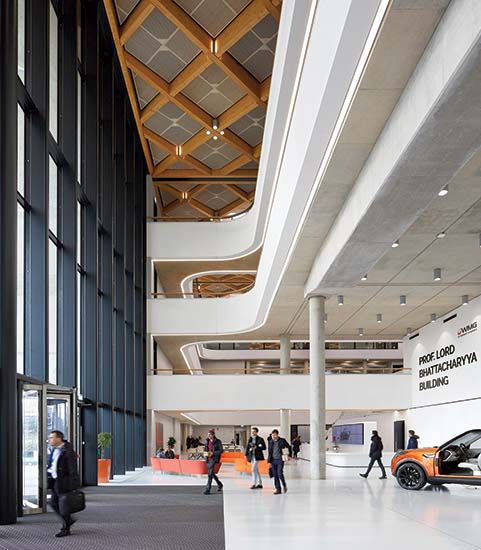 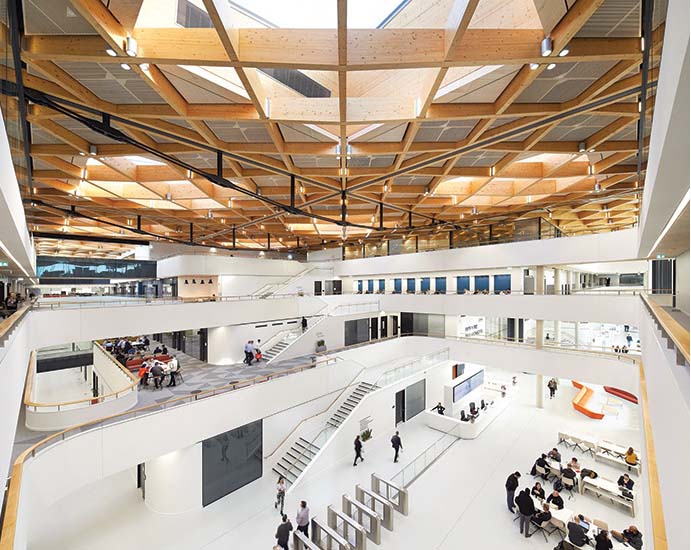 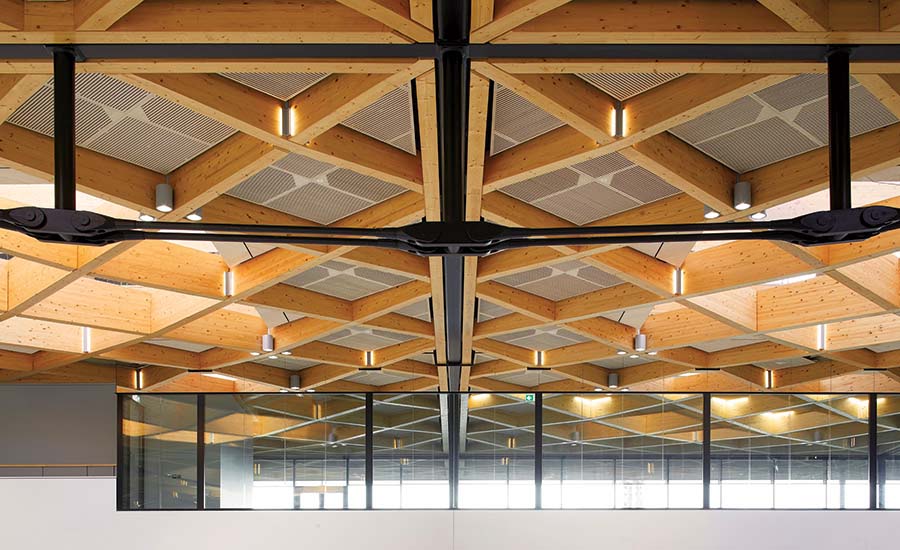 The lobby (1) is the first in a sequence of linked atria (2) that extend throughout the building and run the full height of the structure to the timber-diagrid roof (3). Photos © Hufton + Crow, click to enlarge.

The four-story building, L-shaped in plan, with an offset full-height atrium extending as a sequence of linked spaces into both wings, contains the large, necessarily secretive design studios of the car-making conglomerate Jaguar Land Rover and its India-based owner, Tata. Collaboration goes only so far: while the brands may share common research on technology, when it comes to designing the vehicles, the twin Land Rover and Tata studios, occupying large factory-like double-height volumes, do not even communicate with each other, despite being in the same ownership. If you are fortunate enough to be allowed into these inner sanctums, as I was, the studio heads take care that any commercially sensitive work is covered up or out of sight. 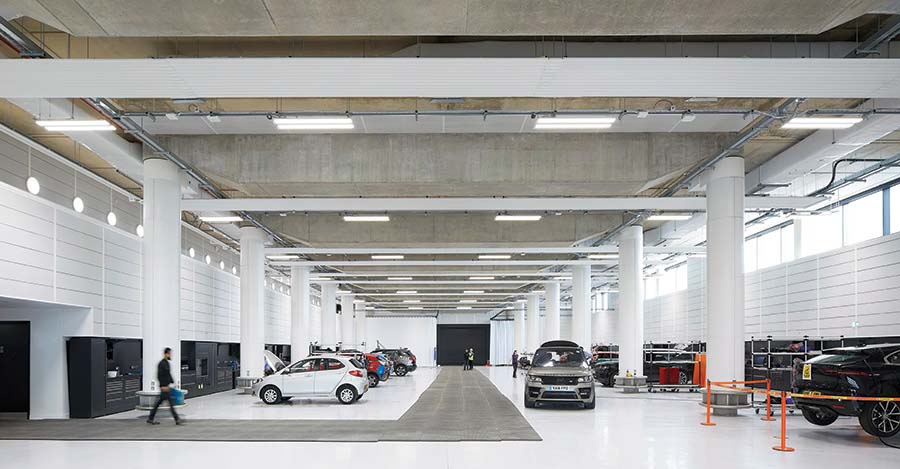 The building’s frame is poured-in-place concrete. The material is particularly evident in the ground-floor engineering hall. Its beefy beams support the design studios above. Photo © Hufton + Crow

And yet this is also a public building. There it sits on the sprawling campus of Warwick University—one of the best of the “new” British universities of the 1960s, with an international reputation. It announces its presence with a prodigious oversailing timber-diagrid roof, engineered by timber specialists Engenuiti in collaboration with Arup, the project’s overall structural engineers. The building, framed in poured-in-place concrete below the timber, steps back to make the roof into a giant-scale canopy with two canted tubular steel support struts marking the entrance. Its facades are clad in sinusoidal perforated aluminum panels, giving a sense of movement to the very long elevations. There is a café that anyone can use, and you can go into the main entrance lobby and peer through a glass wall into the “engineering hall” beyond (occupying the space below the design studios), where, if you’re lucky, you might see people working on a vehicle. This is a bit of architectural theater: usually a display of the latest cars is arranged in front of it.

This is a large building, covering some 355,000 square feet and encompassing a number of spaces for very different functions, such as open-plan offices, student project workshops, those secretive design studios, and, right at the top, a boardroom. There is also a mock car showroom on the first floor as well as a rooftop open-air presentation deck—cars can drive straight out onto it from elevators. Back of house, it breaks down into workshop areas and effectively becomes an industrial building. So it’s a complex beast, but Cullinan Studio—a practice long noted for its environmental credentials—has laid the building out to be well daylit through skylights set into the diagrid, and to have access to terraces on every floor. The mechanical ventilation system includes heat recovery, and chilled beams for the times when cooling is necessary. It is certified BREEAM Excellent (equivalent to LEED Gold).

That enormous roof is the architectural ordering device, an umbrella for all the disparate activities. In consultation with the manufacturers and academics, the architects decided early on that the building should visibly demonstrate its engineering as much as possible. The soffit of the laminated-timber roof structure, with its steel bowstring stiffening trusses, does this job: as you move around the building, you get up quite close to it in places. It holds everything together visually on the interior, while the sinusoidal cladding performs a similar function on the exterior. 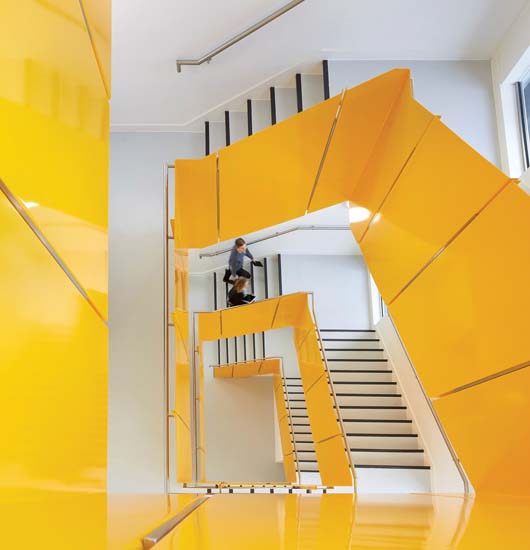 The other big architectural move is the vertical circulation. From the entrance hall, which extends the full four-story height of the building, the edges of the floor slabs are cut back, with radiused corners, while the staircase that joins them has generous breakout landings. The soaring lobby space continues into a long atrium spanned by bridges, creating a grand interior that the architects see as a “terraced landscape.” Here people can see each other across the atria and meet to chat as they hop from floor to floor. Of course, there are elevator banks and perimeter stair cores as well, each picked out in a bright color.

No other building can claim quite this combination of such very different functions beneath one roof. The NAIC, then, can justifiably be declared unique—a very skillful and ingenious typology of one. 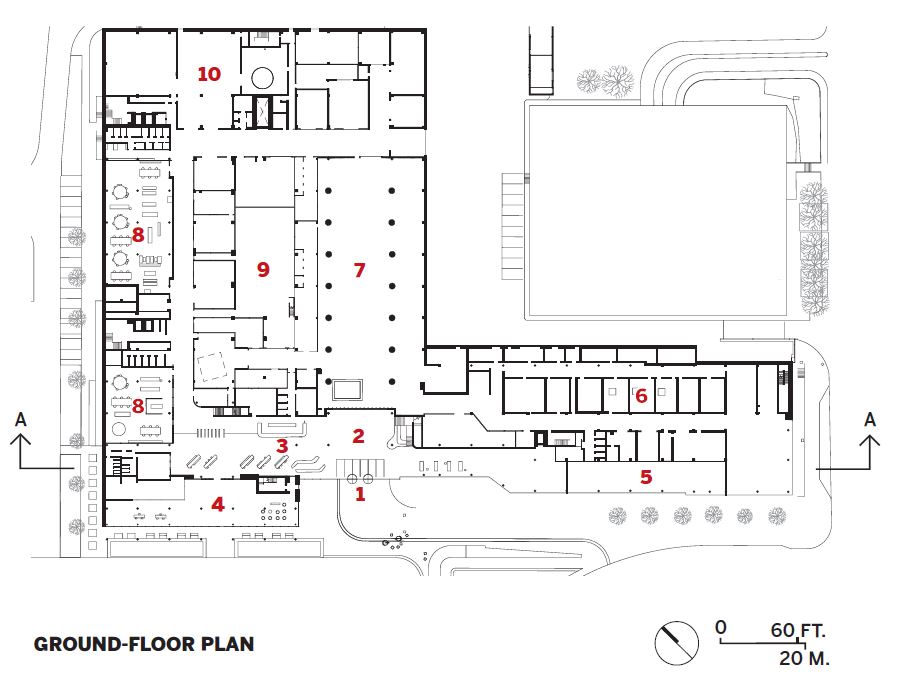 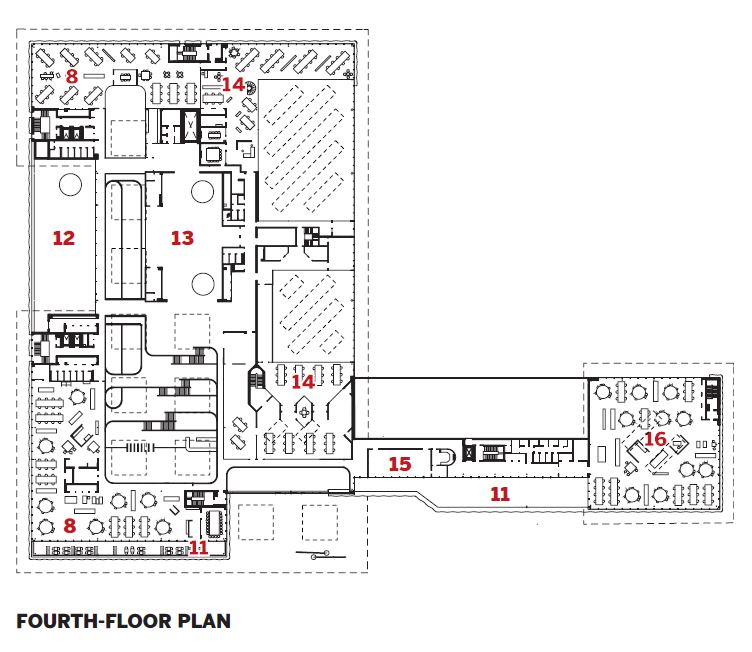