Conductor Robert Boudreau can finally relax. For over 60 years, he and his wife, Kathleen, plied waterways around the world, much of that time aboard the Point Counterpoint II—an unusual boat, designed by Louis Kahn—to bring the joy of music to hundreds of thousands of people. Now, having narrowly escaped the scrapyard, this 195-foot-long double-hulled steel vessel will finally dock permanently in Philadelphia—coincidentally the city Kahn called home.

In the 1950s, Boudreau, a trumpeter who graduated from Juilliard, had an peculiar dream: to assemble an orchestra composed of just wind, brass, and percussion instruments that would travel by water on a floating stage. The American Wind Symphony Orchestra (initially called the American Wind Ensemble) played its first free concert on land in 1957; it only took another year before the orchestra set sail. The first boat to convey the musicians, a flat-deck barge that had been dredged from the Delaware River, the Point Counterpoint, had no means of propulsion and had to be towed to each destination, most often relying on the kindness of passing tugboat captains to hitch a ride. 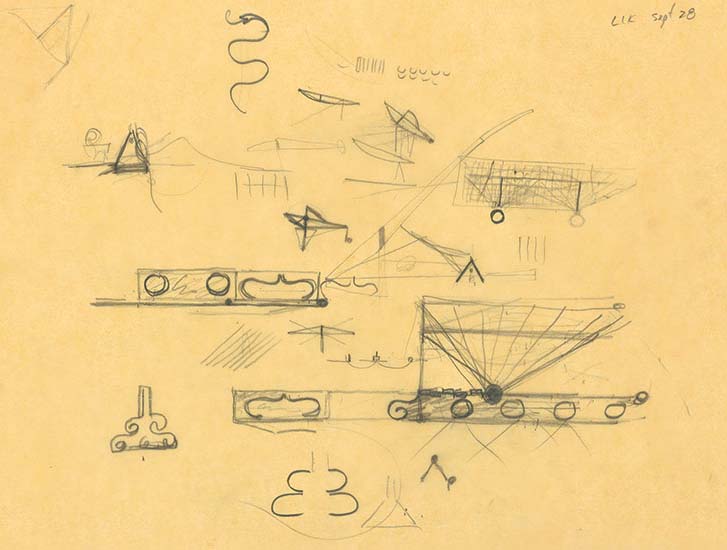 Boudreau’s friendship with Kahn began in 1960, when the maestro asked the architect to design an additional floating stage for the orchestra’s tour along England’s River Thames (the rig stayed there following the trip). Several years later, Boudreau began discussing building a self-propelled boat with the architect, but it wasn’t until the approach of the 1976 Bicentennial of the United States that their conversations got serious. Boudreau was planning an ambitious 76-city tour to celebrate the nation’s birthday and needed a boat that could move under her own power.

Kahn designed a vessel with a long, low profile that resembles a flute and includes variously sized portholes to mimic the instrument’s keys. Dubbed the Point Counterpoint II, it also doubles as a floating art gallery, an integral part of the concept. Once docked, the center of the boat opens like a clamshell to reveal a concert stage, for an audience gathered along the banks of the waterway.

In his 2003 Oscar-nominated film, My Architect, Kahn’s son, Nathaniel, met Boudreau on the Point Counterpoint II. The visit created an emotional scene that displayed the deep connection the musician had with Kahn, and also showed a little book of drawings the architect had made with his son called The Book of Crazy Boats. “It had a boat made out of a spoon and a sausage boat with toothpicks stuck in it to keep it upright,” Nathaniel recounts of this childhood memory of his father. “At the time I had no idea that he was going to build a crazy boat.”

When Kahn died unexpectedly in 1974, he had completed the schematic design for the boat, but it had not been built. British architect George Djurkovic took on the task of completing the project for her inaugural 1976 tour. In the decades since, Point Counterpoint II has journeyed countless nautical miles up and down the Mississippi, Ohio, and other rivers, the Great Lakes, the Erie Canal, and the east and south coasts in the U.S., as well as venturing to Jamaica, Puerto Rico, Ireland, Finland, Germany, France, and Russia (it was transported across the Atlantic in a dry dock within a huge ship), to name just a few of its many international ports of call.

In spite of Point Counterpoint II’s far-flung travels, few people were aware of the vessel’s existence until the cellist Yo-Yo Ma made a plea in 2017 in The New York Review of Books to save “this remarkable mobile cultural institution” from the scrap heap. Boudreau had just turned 90, and he and his wife decided to retire after five decades of running the barge. Since then, the boat has moved from city to city, as Boudreau chased interest in establishing a new home base from Buffalo and Kingston, New York; Chicago; and Toledo, Ohio; finally landing in Pahokee, Florida. But this last promising attempt also fizzled out.

In late 2019, a group in Sag Harbor, New York, including the architect Lee Skolnick, learned the barge would soon be scrapped. They launched a last-ditch effort to salvage her for their culturally rich community—which has a theater company, a soon-to-open film center, and a visual-arts nonprofit called the Church, created by artists Eric Fischl and April Gornik and designed by Skolnick (page 86)—but the regulatory challenges were daunting. Serendipitously, through Fischl, Skolnick was introduced to Dean Adler, CEO of Lubert-Adler Real Estate Funds, who is developing the long-abandoned 1917 Delaware Power Station in Philadelphia into an arts and culture hub. Adler was, oddly enough, actually looking for a music barge. “We are thrilled to have been introduced to this floating architectural jewel designed by Philadelphia’s own Louis Kahn,” says Adler, “and to be able to save this landmark from what would have been its imminent destruction.” The team has towed the barge up from Florida to a shipyard in South Carolina for work on the hull before docking it on the Delaware River, alongside the renovated power station, where its interior will be refurbished before serving as the key musical component of the arts complex when it opens in 2022.

“To honor one of the greatest architects by helping to rescue this boat and ensure its future as a major cultural and educational resource is a highlight of my career,” says Skolnick.

As for Robert Boudreau—who, at 93, still exhibits the tremendous energy that fueled this decades-long adventure—he is all set to pass his baton to the next generation.

As executive director, Gina Pollara oversaw the construction of Louis Kahn’s FDR Memorial/Four Freedoms Park in New York and is part of the group to save the Music Barge.