Adaptive reuse is actually a hybrid of building types, one that integrates the construction techniques used in restoration, preservation, retrofitting, and new construction. Globally, a vast inventory of structures exists that have outlived their original purposes but not lost their embedded value. Churches have proved to be excellent opportunities for adaptive reuse. Usually formulaic in plan and section—a voluminous sanctuary wrapped in a series of ancillary rooms and passageways—and built to last, older churches tend to be structurally sound, with thick masonry foundations and old-growth timber trusses. An ideal example is an 1832 former Methodist Church in the village of Sag Harbor, New York. Deconsecrated in 2008, it was sold and then resold before being acquired by the prominent artists and community activists April Gornik and Eric Fischl. Now permanent residents of Sag Harbor, they envisioned converting the 12,000-square-foot church into a community-focused cultural incubator that will feature an artists-residency program with on-site accommodations, studios, exhibition galleries, a library, and a public garden. They entrusted the transformation to Lee H. Skolnick, with whom they have collaborated for 35 years. 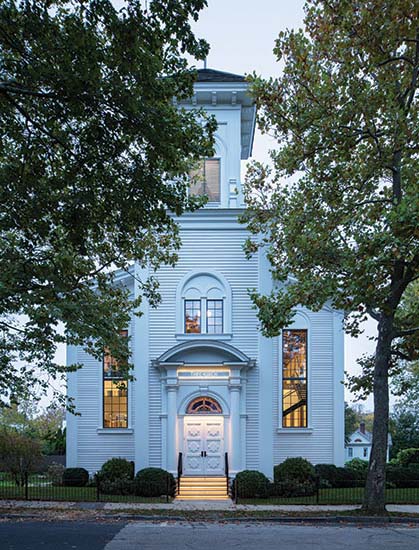 Light glows through the original stained-glass transom above the entrance. Photo © Scott Frances, click to enlarge.

“I don’t have a specific style that I apply to every project,” explains Skolnick, whose architecture firm is based in New York. “I respond to the essence of the situation. The story already exists. You just have to find it.” The church exterior itself is not architecturally unique. Rebuilt to the original specifications, the clapboard-clad structure and architectural details form a quaint collage of different styles—Italianate brackets under the eaves; tall, unadorned windows; handsome Greek Revival entry with the original stained-glass transom; and a newly shuttered belfry with the historic church bell reinstalled. 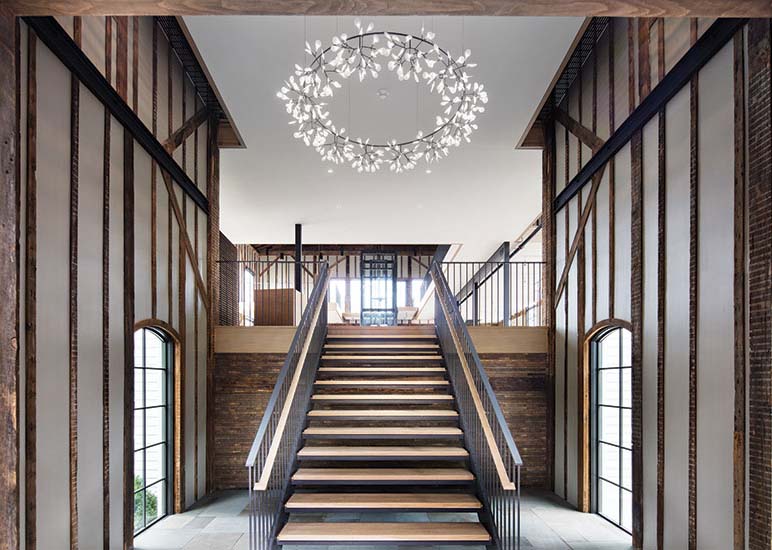 The interior, on the other hand, is spatially dynamic, beginning with the long flight of wide stairs that carries you up into the capacious 51½-foot-by-67-foot former sanctuary. Skolnick made historic value a key part of the story. “The goal was to tread lightly. I didn’t want to intervene more than was absolutely necessary,” he says. One of the first decisions became a reference point going forward. He instructed the skilled crew to remove the plaster on the interior from the lath, and the lath from the structure, revealing the studs and joists. They then filled in the spaces between the vertical members with gypsum board painted light gray. In an inspired move, Skolnick had them reclaim the lath, to create partitions to enclose an office near the entrance and for storage spaces for the artist studios at the lower level. The tightly stacked horizontal lath boards create a refined yet rustic surface. By restricting the scope of intervention and making the right decisions, the architect and builder gave hidden elements of the church a new purpose. 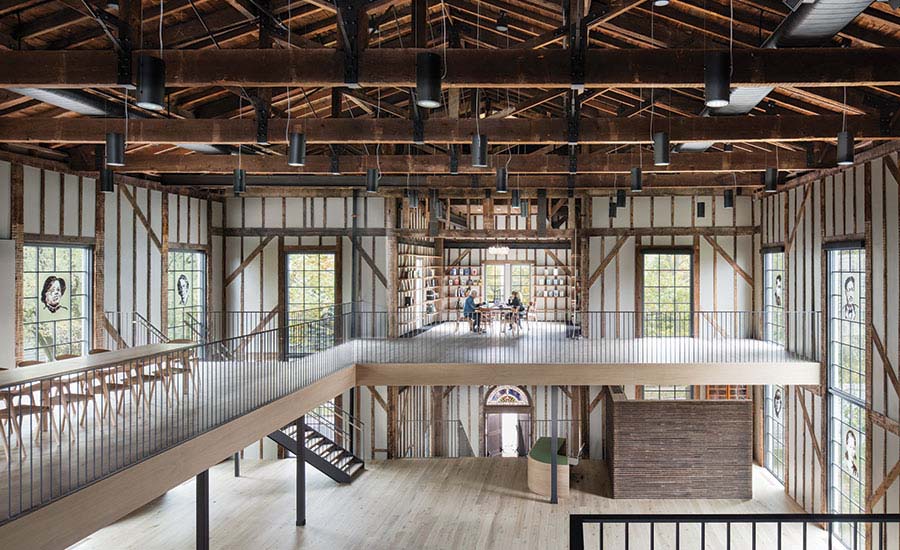 The new mezzanine hovers beneath the historic wooden trusses and along the windows displaying Fischl’s artist portraits. Photo © Scott Frances

Other innovative details accumulated over the course of construction. “Every selection—hardware, paint color, textures, fixtures—becomes critical,” says Skolnick. “It’s all in the details. That’s all there is. The rest of it is pure space.” For instance, railings for an open staircase leading to a new mezzanine are supported by thin steel rods painted gray, giving a rhythm to the ascent. The new mezzanine, replacing an existing balcony, wraps the main space on three sides, but allows the volume to soar from the main floor up 35 feet to the original trusses and beams, now exposed. The matte-finished white oak floor appears to float away from the walls, with the gap between the mezzanine edge and the perimeter walls discreetly filled with glass inserts, or with grills in the library on that upper level. From there, the bell can ring when someone pulls the heavy rope descending from the open belfry. The result is a lightness that eschews the minimalist austerity or generic mediocrity that are risks of adaptive reuse. 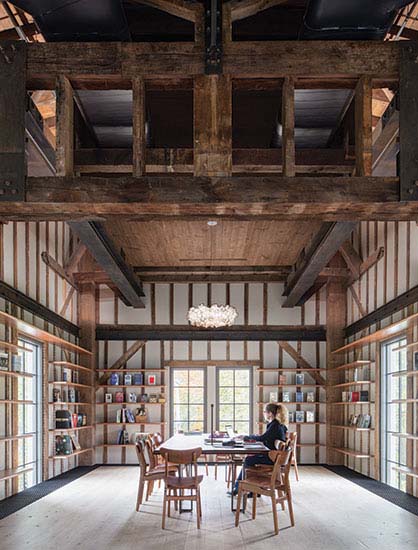 The library occupies the space under the belfry. Photo © Scott Frances

The ground level, under the sanctuary, offers studio space and storage for the artists in residence. This level’s 20-inch-thick, 11-foot-tall stone walls are the foundation for the structure above. Existing openings were enlarged for oversize steel doors, which allow large artworks to be moved in and out of the building.

The north and south walls of the sanctuary have 20-foot-high windows, which rise uninterrupted from the main floor past the new mezzanine. Skolnick designed the new windows with thinner mullions and muntins than the original ones and painted them gunmetal gray. Fischl had an ingenious idea, to use the windows as homage to the village’s cultural heritage. “Churches do stained-glass images of saints,” the artist explains. “We chose to canonize those great artists who had a relationship to Sag Harbor’s history. I wanted the portraits to celebrate this pantheon of creative people as well as reflect the diversity of our community.” 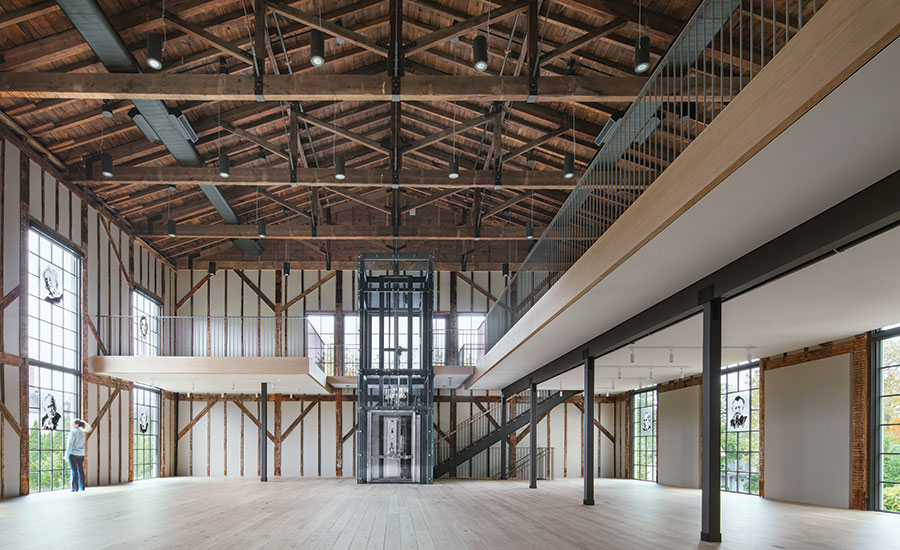 Fischl employed a monochromatic painting technique, called grisaille, dating to the Renaissance, in which only shades of gray are used. “The images were painted on frosted mylar and then photographed. Each image was printed twice and then registered on-site in predetermined spaces in the window grid. “Basically, the portraits are decals,” admits Fischl. While only 20 portraits can be displayed at one time, Fischl has identified 150 artists, whose portraits will be rotated as they are completed. The 20 faces of the inaugural display include George Balanchine, Langston Hughes, E.L. Doctorow, Elaine Stritch, and Spalding Gray.

Skolnick designed a two-story addition at the rear of the church, with a separate entrance, to house visiting artists. Its massing differs intentionally from that of the church, and it will eventually be covered with vegetation. The public garden, designed by landscape architect Edmund Hollander, features a gently sloping grass amphitheater with irregularly cut stone slabs to provide seating. (Installed prior to the pandemic, the stone placement nonetheless appears to adhere to the rules of social distancing.)

Every new detail—visually and programmatically—supports every original detail: the rebirth of the Church is simultaneously a continuation of its past. Although its current mission is a secular one, it embodies, as Fischl likes to say, “an energy that has served people in need. I think that’s the nature of a church.” 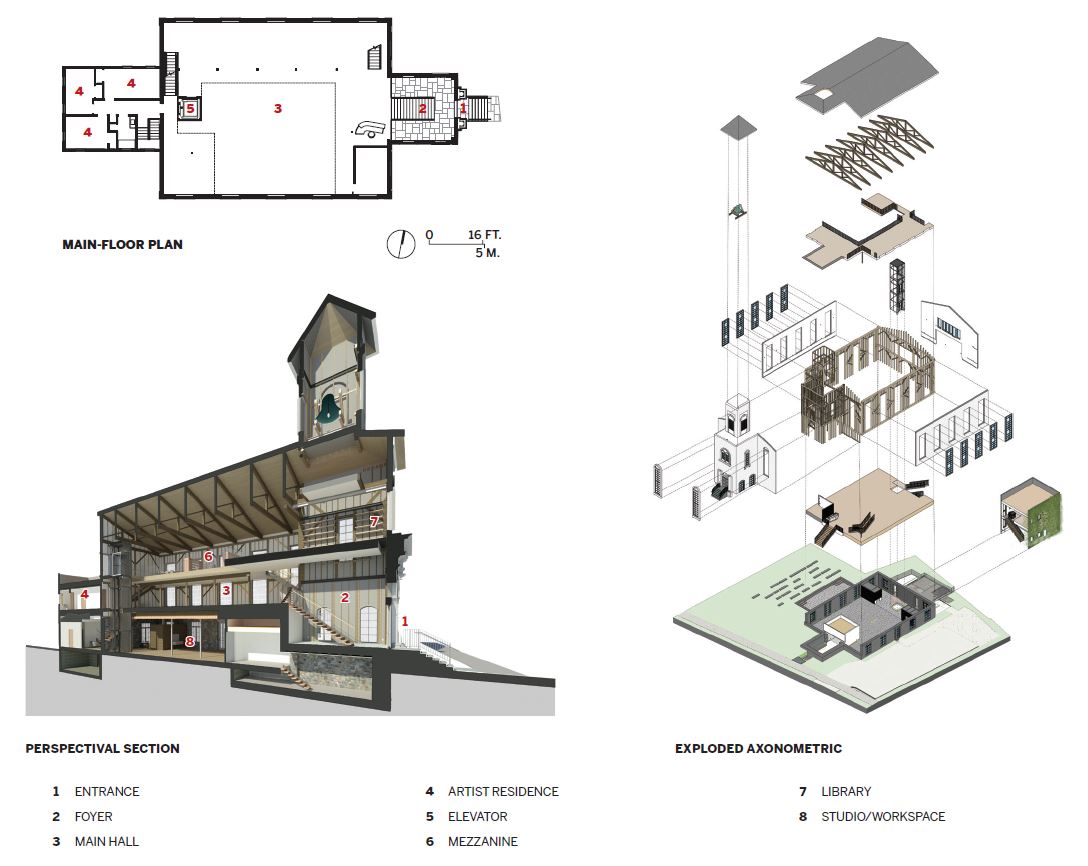